The Real Housewives of Potomac Premiere Recap: Candiace and Her Mom Fight Over Inviting Her Brother to Her Wedding

by Tiffany Brown May 6, 2019 6 comments
ShareTweetWhatsappPinterestRedditTumblrMailFlipboard 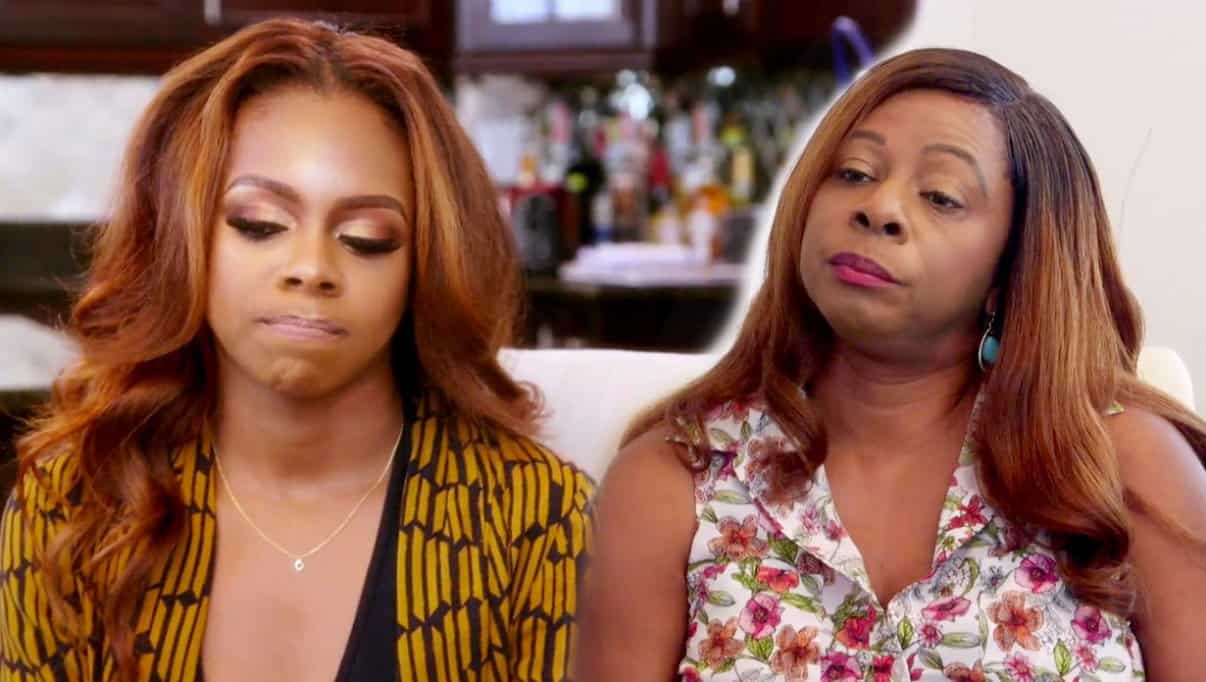 The southern belles of The Real Housewives of Potomac returned last night, and, as we got reacquainted, it was clear to see that all of the ladies have had a lot going on since we last checked in with them.

It was the week before Candiace’s wedding, and, since all the ladies knew they’d be running into each other, for better or for worse, they were all looking to clear the air.  Gizelle was up first.  At home, clad in a hideous pair of python-printed leggings, Gizelle enlisted her daughters’ help in preparing a peace offering for Karen–her famous chocolate chip cookies.  The girls were happy to help, but were curious about what had gone wrong between their mother and her former friend.

They asked Gizelle if she had been “mean” to Karen, and Gizelle explained that she had only been “joking” when she’d constantly questioned Karen’s marriage and finances, following her husband, Ray’s tax issues, and her accusations about his romantic interest in her friend and business associate, Erika Lyles.  Some joke! But, Gizelle said she now knows that Karen wasn’t ready to take her jokes. She said she wanted them to get to a better place, and hoped that Karen would see that their friendship was more important than the ugliness that had taken place between them last season.

When Gizelle went to deliver the cookies, she called from down the street to let Karen know she was in her neck of the woods, and wished to stop by.  Karen told her it wasn’t a good time, as her family was still very much in mourning, following the passing of both of her beloved parents, less than seven months apart.  Gizelle said she understood, and assured Karen that she was there for her, and available any time she wanted to talk.  Karen said she appreciated Gizelle’s overture, but explained to her friend/lawyer/assistant, Matt, who happened to be visiting at the time, that she was going to need for Gizelle to really own up to the things she’d done, and that it was going to take time, and a lot of it, before she was ready to buy what Gizelle was selling.

And apparently, Gizelle wasn’t willing to give her that time.  She called Karen back just a few minutes later, and explained that she had cookies for Karen, which her daughters had helped her bake, and how bad it would look if she returned home with them.  Karen accused her of playing the “baby card” by using her children to warm her way back into Karen’s good graces, but the baby card must have been an ace, because Karen said it was fine if Gizelle wanted to drop them off, and offered to have Matt come outside to collect them.  But this wasn’t good enough for Gizelle, who said she didn’t want to see Matt.

Karen finally relented (probably just to get Gizelle to leave her alone) and agreed to come to the front door, and get the cookies herself.  However, she added that she still had no interest in a conversation with Gizelle, and was in no mood to rehash everything.  Gizelle said that was fine, and both women were very cordial and gracious when they saw each other.

Karen thanked Gizelle for the peace offering, and told her to thank her daughters.  She added that this was her private home, and said that she would reach out to Gizelle after Candiace’s wedding.  Gizelle had the good sense not to push the issue any further, although she didn’t really understand why Matt could be there, and she couldn’t.  I’m just spitballing here, but perhaps it had something to do with the fact that Matt hadn’t spent all of last season kicking Karen while she was down.

In better news, the couples of RHOP are still going strong.  Robyn and Juan looked closer than ever as they enjoyed a couple’s massage.  She also reported that their real estate business is thriving, and that they are financially solvent once more.

Even Gizelle and Sherman seem to have made amends.  Just before her daughters informed her that those leggings weren’t as flattering as she believed them to be, she had informed them that Sherman would be her plus one for Candiace and Chris’ big day.

Monique and her Chris also seemed happy as they prepared for their newest addition.  But Monique admitted she did have some regrets about her behavior toward her friends last season–particularly Gizelle.  She said she knows now that she was wrong for putting Sherman on blast, and admitted that she only did so in an effort to embarrass Gizelle.  You may recall that Monique gleefully told everyone about an embarrassing episode from Sherman’s past, in which he’d been arrested for indecent exposure after being caught in a compromising position with a young woman in a park–a young woman who was not his wife at the time, I might add.

The whole sordid mess ultimately led to the demise of Sherman’s already turbulent marriage to a woman Gizelle had once been friendly with.  Needless to say, once Gizelle started dating Sherman, she didn’t remain on the best of terms with his former wife, and Monique was more than happy to exploit, and add to, the tension, by befriending the woman, herself, and inviting her and Gizelle to the same parties and events.  It was childish and ridiculous, and Monique seemed genuinely ashamed of her behavior.  She said she hopes to make amends with both Gizelle and Sherman this season.

Ashley and Michael seemed pretty blissful, as well, considering what we’ll soon learn about Michel (but that’s for a later recap).  They were all kisses, whipped cream and blindfolds when we checked in with them.  They’re still trying to conceive, following the devastating miscarriage Ashley suffered after they wrapped last season, and she said that she is taking a holistic approach to conception that includes cutting back on alcohol, meditation, and wool socks (I have no idea).

As for the couple of the hour, Candiace and Chris, they were counting down the days before they became man and wife, and were clearly more in love than ever, but Candiace was more concerned with her relationship with her mother, who was sure to be angry when Candiace told her that she’d forged a relationship with her half brother, Michael, (the product of Candiace’s father’s infidelity, and a major source of discomfort for her mother) and had invited him to her wedding.

When Candiace discussed the issue with Karen, she said that she feared her mother would “hate” her when she found out.  Karen assured her that would never happen, and warned her that she was taking on too much of her mother’s baggage.  It was solid advice, but as it turns out, Candiace was right to worry about her mother’s reaction.  It wasn’t pretty.

Candiace invited her mother over for breakfast to break the news about her secret wedding guest, and when she heard the news, she really flipped.  She called Candiace’s relationship with her brother “bulls**t,” and accused her of bringing her father’s infidelity and dishonesty to the wedding.  Showing more class and maturity that we’re used to seeing from her, Candiace calmly told her mother that if she wanted to be angry with her father, that was understandable, but that it had nothing, whatsoever, to do with her brother.

Her mother went on to say that his very existence was embarrassing to her, and that she couldn’t believe that Candiace had been “chasing behind” her father’s “illegitimate children.” Now, here’s the interesting part: Candiace’s half brother is 7 years her senior, and was born before her parents married, so clearly her mother was able to forgive and forget at some point, as she went on to marry Candiace’s father. So, the fact that she was so worked up about it now that they were divorced and nearly forty years had passed was odd, to say the least.  But odd or not, she was not letting it go.

Candiace’s mother told her that there must be “something wrong” with her brain for her to think that it was okay for her to have invited him to her wedding, which is what finally made Candiace snap.  She told her mother that it was her wedding, and she’d have anyone she wanted there.  Her mother told her that her loyalties were misplaced, and reminded her that she was the one who had changed her diapers (wow–she was pulling out all the stops!), took her to dance classes, paid for her pageant gowns, etc, and that Candiace had better never forget it.

It was pretty rough–and it’s not over by a long shot.  The show faded to black from there, but be sure to tune in next week to watch Candiace walk down the aisle, although I suspect all eyes will be on her mother and brother. Stay tuned!

TELL US – WHAT WERE YOUR THOUGHTS ON THE RHOP RECAP?