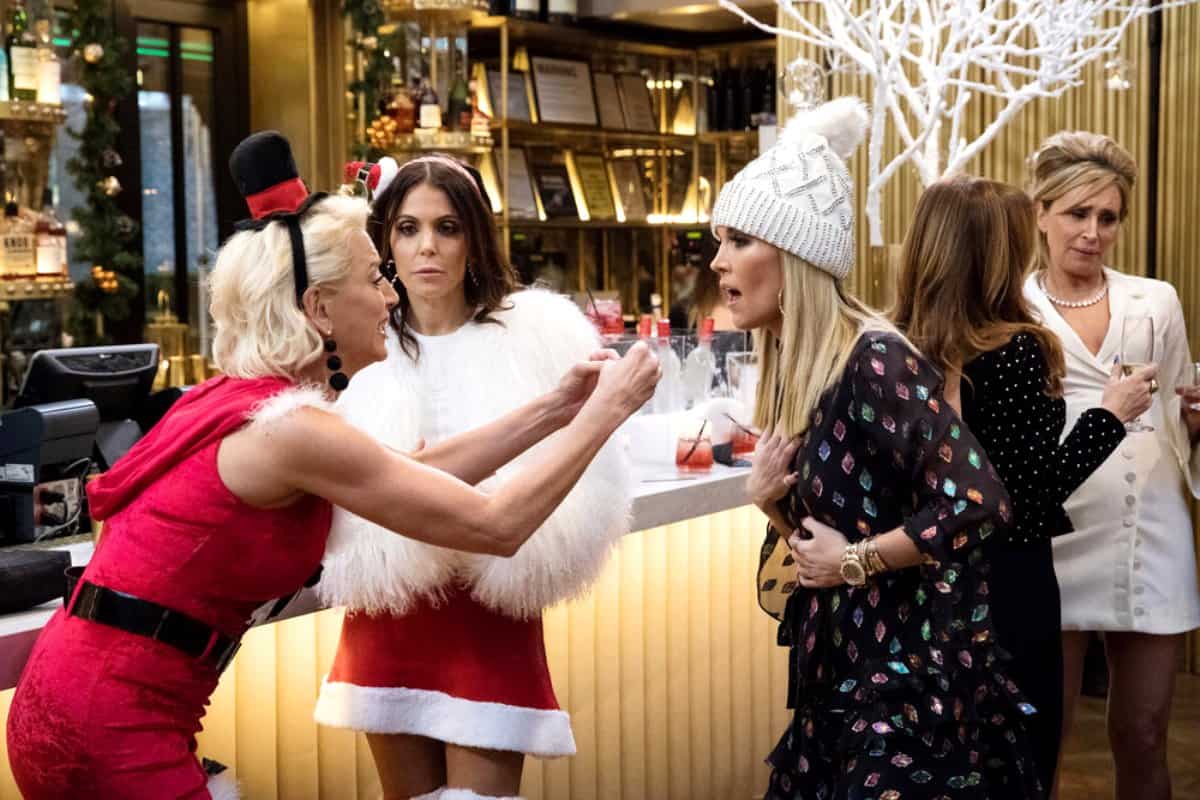 The season finale of The Real Housewives of New York aired last night, and I’ve gotta say that after a season filled with drama, tears, and drunken falls, it was a little anticlimactic.  But I will also say that it was actually nice to see all the ladies end up in a pretty good place with one another—for the most part.  Here’s how it all went down:

When we picked up with the ladies, Sonja and Dorinda had met up in a cool sculpting location to get their bodies bikini-ready for their post-holiday plans.  As they sat back, talk soon turned to Tinsley.  Both women believed that she must still be seeing Scott and was lying about their relationship status.  Now, I’m not sure why either one would really care, but they were convinced Tinsley was “still in the mix” with Scott based on the fact that she was still living in her penthouse suite in a fancy uptown hotel.  They also thought it was suspicious that she seemed to have on a new outfit that cost upward of $1,000 every time they saw her.  They just couldn’t understand why she wouldn’t be more forthcoming about her relationship.

Gee, I don’t know—maybe because Tinsley is familiar with the way these women operate and didn’t want them lying around discussing her personal business while they got their fat frozen off?  Who knows?  Suffice to say, Sonja and Dorinda were determined to get to the bottom of it.  After all, as Sonja pointed out, you only get about two years to b.s. your way through NYC, and Tinsley’s time was up.

Later Sonja got a pretty disturbing phone call from Bethenny, who reported that she had just returned from a trip to visit her boyfriend, Paul.  While there, she had landed in a Boston ICU.  As Bethenny explained, she had suffered an anaphylactic episode after eating miso soup with fish flakes.  As we all know, Bethenny has a horrible allergy to fish.  After eating the soup, she suffered horrible symptoms, including swollen hands and a closed throat.  Before long, she passed out cold, and Paul saved the day by getting her to the emergency room.  Apparently, it was just in the nick of time.  The doctors told her that if they’d wasted any more time getting her there, she may not have made it!

It all sounded very scary, and later, Bethenny described ‘feeling her late boyfriend, Dennis, pulling her toward him,’ but she said she was not going with him.  She said she finally had closure and knew that Dennis loved her.  While she would always love him and think of him, she had a lot more life to live.  She also recalled Dennis always telling her that she would find someone who would truly appreciate her.  This was odd, because didn’t she say that they’d gotten engaged prior to his passing?  Wouldn’t that mean that she’d already found someone who appreciated her? Hmm.

Soon, it was time for Luann’s highly anticipated Christmas cabaret show (sigh) at the Gramercy Theater.  Believe it or not, even with the many holiday events available in New York, the show was sold out!  Sonja, Dorinda, and Tinsley all showed up to see Luann before she went on, but only Barbara was staying for the show.  Ramona was throwing a surprise joint birthday party for Sonja and Dorinda.  While Barbara had ruined the surprise for Sonja, Dorinda was still unaware, and the party was still in the works.

The ladies stood around the theater’s lobby, waiting to see Luann.  As they waited, they browsed the Luann-centered merchandise being sold.  It was a little ridiculous, to say the least.  The goods included the countess’ own statement necklaces and these odd candles that looked like the old-school religious candles your grandmother may have had.  But instead of featuring a picture of Jesus or The Virgin Mary, they had an image of Luann wearing a crown.  There’s too much to say about this—so let’s just move on.

As the ladies stood around, Dorinda couldn’t help but comment on the fact that Tinsley was wearing yet another fabulous and suspiciously expensive dress.  Tinsley let the comment go by, and Barbara changed the subject to extend her condolences over the death of Tinsley’s beloved dog, Bambi.  But Dorinda just had to get in another dig at Tinsey.  She brought up the fact that Tinsley intended to freeze the pooch so that he could be preserved for a memorial service she had planned.  It was clear that Dorinda was being snarky, and her attitude wasn’t lost on Tinsley.  She couldn’t understand why Dorinda was making light of her pet’s death, and she resolved to speak to her about it at a later time.

Before the ladies took their leave to go to Ramona’s party, they figured they’d better at least make sure Luann knew they’d shown up, lest she have another tantrum about no one coming to her show (for the 50th time). But Luann didn’t really seem to care about their presence.  She was busy primping and readying herself for the show, which was understandable.  Still, her friends were left feeling like “fans,” as she seemed to have no time to chat.  She shooed them away to finish getting her hair and makeup done.

The ladies took their leave, and Luann’s true fans seemed to enjoy the show. Barbara seemed to be less than impressed with her friend’s talent, though.  When her friend asked if there would be other people performing in the show, Barbara said there would be because Luann couldn’t carry the show on her own since she ‘couldn’t really sing.’  Ouch—and also very true! Luann strutted about singing Christmas classics and the ubiquitous “Money Can’t Buy you Class.” As she sang, the audience laughed and clapped along with her.  It went pretty well, and they all guffawed as Luann made light of her stint in rehab and highly publicized arrest in Palm Spring last year. Tasteless?  Perhaps, but a success all the same.

At Ramona’s party, everyone was in good spirits.  After a glass or two of liquid courage, Tinsley decided to confront Dorinda about her attitude.  They sat alone at a table, and Dorinda told her that they all felt she was probably still with Scott and that he was supporting her lavish lifestyle.  Tinsley denied it, and soon Dorinda called Sonja and Ramona over to help her explain why they all felt that Scott was still in the picture.

Tinsley couldn’t believe they were all ganging up on her and asking how she was affording to live the way she did.  She told them to stay out of her business and declared in no uncertain terms that she and Scott were over, despite the fact that they still communicated sometimes.  Ramona should understand that, considering her complicated relationship with her own ex, but I digress.

Later in the week, it was time for Bethenny’s Smores and Whores party…because every Housewives season has to end with a party, and nothing says Christmas like a bunch of middle-aged women grinding on male strippers.  But a good time was had by all, and Tinsley and Dorinda even made up—although Dorinda still had her doubts about her relationship with Scott.  The ladies ended the year on a high note.  While the episode lacked some of the drama we’ve come to expect, we were left feeling as though 2019 would be a great year for these ladies.

Keep in mind, the party isn’t officially over until the ladies take to the couches.  Part 1 of the RHONY reunion special will take place in two weeks, and there will be plenty of fireworks—stay tuned!