The Real Housewives of New York City Recap: More Than a Feeling 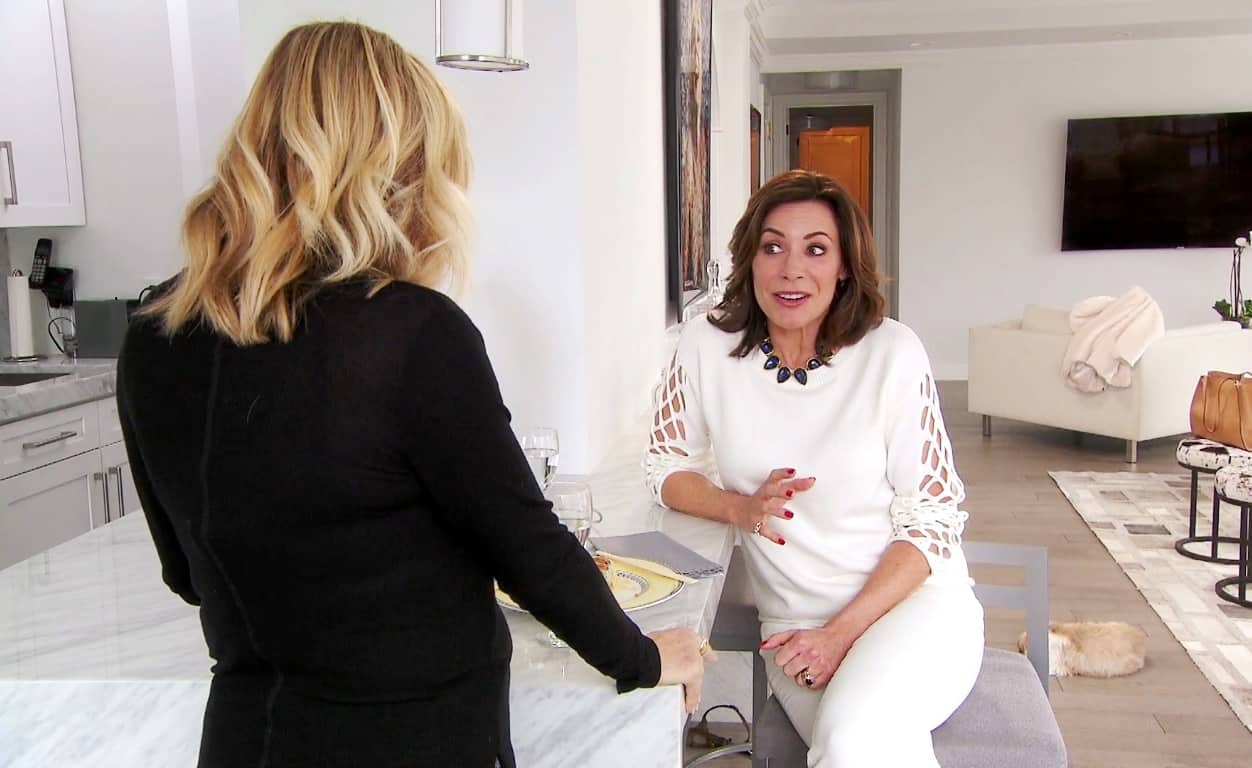 The Real Housewives of New York were back last night with the penultimate episode of what has turned out to be a pretty tumultuous season.  We’ve had tears, laughter, fighting, and making up, and last night was certainly no different.  Here’s how it all went down:

When we picked up with the ladies, they were still at that horrific dinner in Miami.  Bethenny was still in full hyperventilation after using all the strength she had to tell Luann off for being oblivious to the feelings of those around her, “dining out on her sobriety,” and failing to fully appreciate the way her friends had put themselves out to help her when she was drinking.

When Bethenny finally walked away, Luann marveled aloud at how much “pent up anger” she had.  Ramona, who has been surprisingly reasonable lately, explained to Luann just what Bethenny was feeling.  A cruel irony had hit Bethenny when she saw Luann strutting around, talking about cabaret acts and being the last to get a massage.  Bethenny realized she had put all her time and energy into helping Luann, who didn’t seem to appreciate it.  All the while her boyfriend, Dennis, was struggling with his own addiction.  She thought that if she’d put as much work into helping him, he’d still be here.

Luann said she was going to go out with other friends, but as much as she needed to get away, she thought better of it.  She ended up staying with the ladies.  She was feeling pretty fragile, and she was sure that if she went out, she was going to take a drink.  So she stuck it out, and she and Bethenny ended up apologizing to one another and hugging it out.

Later, they all headed back to the beach house and had more drinks.  Tinsley got pretty frisky, flashing her boobs and butt at the ladies.  Her choice outfit was the source of one of the funniest lines of the night.  When Ramona told her that it flattened her breasts, Tinsley said that she’d paid $3,000 for the dress. Without missing a beat, Ramona told her that she’d “overpaid.”  Ouch!  From here on out, we shall call her Ramona Zinger.

Things were a little more somber upstairs.  Bethenny felt embarrassed and exhausted about her rant over dinner, and Dorinda went to check on her.  Dorinda found her friend red-eyed and drained, and so she sat her down and gave her some advice.  Dorinda told Bethenny that she could not outrun her grief and that going 100 mph was not going to make it go away.  She needed to allow herself time to grieve Dennis properly and stop trying to be so strong all the time.  If she didn’t do that, she was only going to have more explosions like she had that night.  After all, those feelings had to go somewhere.  Bethenny agreed.  She allowed herself to talk about how bad it was that Dennis was gone and how awful she felt about it.

Luckily, the following morning it was time for the ladies to head back to their busy lives in the Big Apple. Bethenny was anxious to get back to her daughter, Brynn.  As usual, she left at the crack of dawn before the others were even up.  Tinsley was anxious to check on her sick dog, Bambi.  Dorinda was still working on her new apartment, which her boyfriend, John, won’t be living in (she’s all about the dry cleaning—not the man himself).  And, of course, Luann, was working on her “music,” a new, painfully tone-deaf little number called “One Day at a Time.”  The song features the line, ” I’m feeling Jovanni,” a reference to the designer she wore during her cabaret act last season—and, of course, the source of Dorinda’s heckling at said event.

In the meantime, Dorinda was planning a charity event to benefit the LGBTQ community.  The theme of the event was 80’s style aerobics classes.  The women thought it was a great idea, and they were all on board. The only exception was  Tinsley, who suffered a devastating loss: the death of her beloved little pooch, Bambi.  And I do mean devastating! Tinsley was hysterical over Bambi’s passing, and she called Sonja and Ramona over to her home to comfort her.  This may have been a mistake, as the two were less than sympathetic.

Ramona was more concerned with the fact that Tinsley was not wearing a stitch of makeup (not even lip gloss!) when they arrived.  Both women told her that she needed to calm down and gain some perspective on things, as she described finding Bambi’s lifeless body and calling 911 (yes, 911).  She also talked about the heart-wrenching moment she realized that despite their best efforts, the firefighters (yes, plural) that arrived could not revive Bambi.

Tinsley said that she was considering naming her child Bambi in honor of the dog.  Ramona warned against it, lest Tinsley’s future daughter grow up to become a Miami stripper.  It was sound advice, and Sonja had to agree that Tinsley may want to think this through once she was less grief-stricken.  Tinsley only cried harder when she showed them the bereavement gift from her ex-boyfriend, Scott.  He’d given her an odd pair of silver sneakers called Bambis.

Tinsley said Scott loved the little dog too, as did her family, who would soon be attending a viewing in her honor.  In fact, Tinsley said, she’d frozen the poor creature for just that occasion.  She planned to thaw the dog out so that her mother and sister could hold her one last time.  I don’t even know what to say about that, other than don’t eat or drink anything that may have been in the freezer if you ever go to Tinsley’s house.

Later, Luann paid a visit to Ramona, and the two discussed what went down in Miami.  Ramona told Luann that she was really proud of her for sticking around and taking the heat.  Luann thanked her for recognizing that.  She reported that while she and Bethenny hadn’t spoken since they’d returned to New York, they had texted frequently, a fact that Dorinda found wildly unfair when Bethenny told her.  After all, Luann had ignored Dorinda for months after their own falling out during last season’s girls’ trip.  All that aside, Ramona said she was glad the friends were in communication with one another.  She explained again that Bethenny had simply been put off by Luann’s self-absorbed attitude.

Luann said she wasn’t self-absorbed at all.  Then, she immediately changed the topic to her upcoming Christmas cabaret show (sigh).  It was at that point that Ramona broke some very unwelcome news—bluntly, as only Ramona can.  She announced that she and the ladies would not be attending, as they did not feel like ‘sitting around watching her work.’  Instead, she would be throwing a surprise party for Dorinda and Sonja.  After all,  she explained, they’d all seen her act several times, and would prefer to do something fun together instead (ouch—and also lol!).

Luann was shocked by this revelation.  What could possibly be more fun than watching her act (AGAIN)?  Besides, she explained, this would be her Christmas show, which would be totally different.  I mean, seriously, you haven’t heard “Money Can’t Buy You Class” until you’ve heard Luann belt it out dressed like a naughty Mrs. Claus, am I right?  But Ramona was unmoved.  She said it was the only day they could do it, and Luann was welcome to join them after the show.  Luann said they could have the party on any of the other six days of the week, but Ramona said it was already done.

In reality, Ramona revealed during her confessional, the ladies had all agreed to this during a group text.  None of them wanted to go to the show, and Ramona throwing a party on the same night seemed the perfect way to get them all out of it.  The ladies were counting on her, and she handled it like a champ.  She remained stoic as Luann pouted and slouched her way out of Ramona’s apartment, like a child whose parents didn’t want to go to her school play.

On the night of Dorinda’s aerobics party, tempers threatened to flare up.  First, Dorinda was upset to find out that Luann had gotten gifts for Bethenny and Barbara.  She reminded Luann that she hadn’t spoken to her for 10 months following their falling out in Cartagena, but Luann told her to butt out.  She said the gifts were to thank them for helping her through a difficult time, and not for ripping her a new one.  Luann also said that the incidents had nothing, whatsoever, to do with one another.  But Dorinda wasn’t buying that.  She felt the Countess and The Queen Bee would forever be a private little team that excluded the others.

Dorinda’s assessment may have been accurate.  A little later, everyone tried to act like they weren’t on board with Ramona’s plan to throw a party on the night of Luann’s show.  Instead, they threw her under the bus.  It started when Ramona told Barbara about the party.  She said she knew that Barbara would be going to the show, but she wanted her to know she was invited to the party.

Barbara thought it was awfully convenient for Ramona to invite her to an event she knew she couldn’t come to.  She went running to Sonja to complain about it.  Sonja then told Ramona that she thought it was rude.  Ramona was forced to tell her it was supposed to be a surprise for her and Dorinda.  It looked like Ramona was angry with Barbara yet again.

On the other side of the room, Luann brought up the issue with Bethenny, who also feigned ignorance about the party plan.  She said she felt they should all go and support Luann and have the party after the show.  Wow! Poor Ramona—she’d only been trying to help them all get out of an excruciating evening, and now she looked like the bad guy.

Well, folks, we’ve only got one more episode left of this season of RHONY, and it looks like we’re going to a cabaret (thanks a lot, Barbara!).  Stay tuned!