The Real Housewives of New York Recap: Luann Wants Dorinda to Admit She Has a Drinking Problem 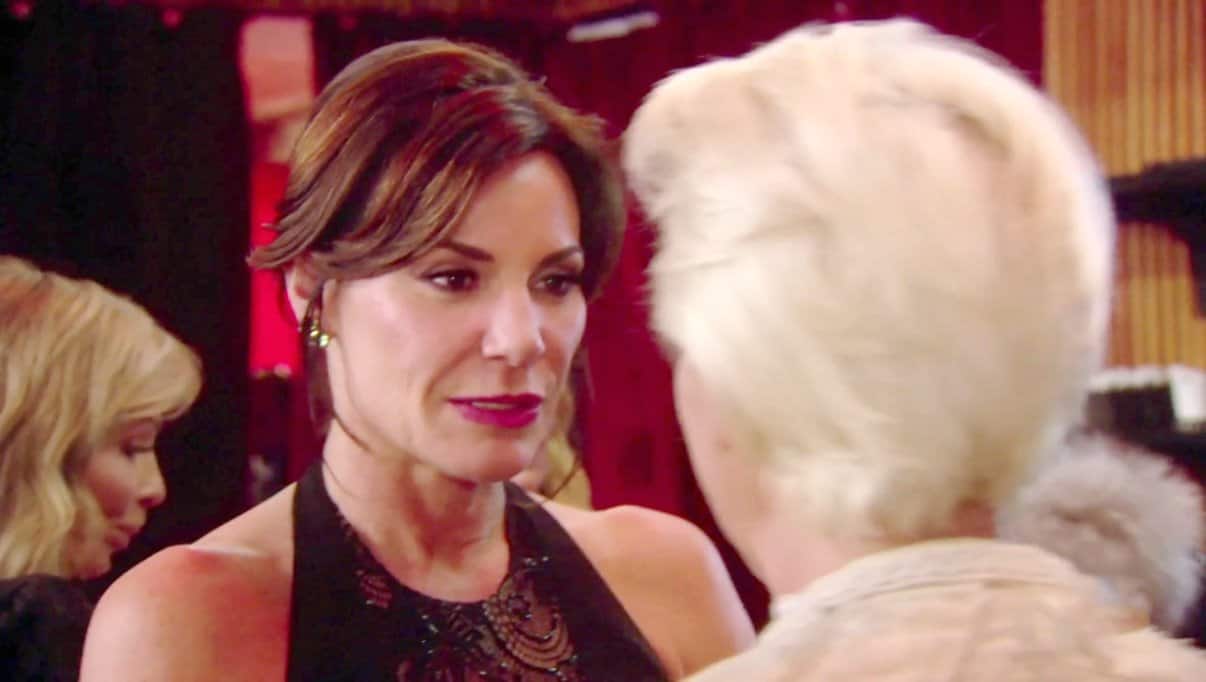 The ladies of The Real Housewives of New York City were back in the big city last night, and each was happy to be surrounded by the comforts and luxuries of home.

Ramona had finally finished the renovations on her home (you can see photos of her home here), and was eager to show off the results. She invited Sonja, Dorinda, and Luann over to see how it all turned out, but unfortunately, they seemed less than impressed with the cool sterility of the changes.

They were, however, glad to be back dry land after their frightening nautical experience in Colombia.  They were also glad to finally be having regular bowel movements again, after the explosive diarrhea they’d suffered.  I’ll spare you the details, but there were many.  But here’s an interesting little tidbit for you: Sonja often wears diapers when she travels to avoid using public lavatories. You’re welcome!

When Tinsley and Carole checked in with one another, Tinsley was still insisting that the boat ride hadn’t really been all that bad, but Carole disagreed.  She likened Tinsley’s reaction to being in an abusive relationship, and the tendency of the battered person to try to convince everyone that all was well.  Tinsley took it quite personally, and to Carole’s obvious annoyance, began to cry.

Bethenny also had new digs to show off.  She moved into a fabulous new apartment, and invited Dorinda over to check it out.  After discussing the walk in closets and interior design, Dorinda confided that she was still angry about her argument with Luann.  She said she felt that she had been there when Luann needed her most, and that after years of leaning on her, Luann now wanted to become her teacher.

Bethenny seemed to agree with Dorinda about Luann being on a “pink cloud,” following her stint in rehab, and commiserated about how hurtful it was to lose a close friendship.  She and Carole are still on the outs, and she just hasn’t felt like herself since they started growing apart. She said their friendship was like “burnt marinara sauce,” and that no amount of sugar or vinegar was going to fix it.

Bethenny continued to complain about Carole when she met up with Luann. She said that Carole seemed to be obsessed with everything being  “light” and “young” these days, and well, that’s just not Bethenny.  She said that Carole seems to have found what she’s looking for in Tinsley, and Luann quipped that she’d found those qualities in her romantic relationships as well.

Bethenny was enjoying this new, irreverent side of the Countess, and laughed as she described the changes to Ramona’s house.  She also spilled the beans about the things that Dorinda had said, and told Luann that, as far as Dorinda was concerned, she’d been in the wrong.

Carole told Dorinda that Bethenny had reached out to her after the trip, but that she still felt disconnected from her.  She said that Bethenny seemed to only see things from her side, and Dorinda agreed that she has a tendency to start their stories from a place of her choosing–generally where she looks good.

Carole was also bothered by the fact that Bethenny had texted Brian, aka, The Guy in the Red Scarf, to ask if he was in Miami. Carole found this strange, considering that Bethenny had completely trashed him during their talk in Colombia, and both women agreed that she was “two faced.”

When Dorinda mentioned that Bethenny had invited her over  to see her new apartment, Carole became upset that Bethenny hadn’t asked her.  Although, I’m not sure why she would expect an invitation, since she’s been blowing Bethenny off all season. But she felt the fact that she hadn’t been asked was a good indication of where she and Bethenny stood in their friendship.

Carole also had important news to share.  Her book, “The Widow’s Guide to Sex and Dating” might become a television series (could THAT be her reason for leaving the show?). She also announced that she would be throwing a party with Cosmopolitan to celebrate her column in the magazine.

When the day of the party arrived, Bethenny was a no show, but the other women turned up in their athleisure best, including Tinsley, who looked only slightly out of place in her fur shrug and pony tails.  But a good time was had by all, and Carole was thrilled when both former cast mate, Heather Thomson, and her former flame, Adam showed up.

Adam arrived with a trophy, and presented it to Carole for finishing the marathon a few months back, and asked if they could get together, and catch up over coffee. Carole informed him that she no longer drank coffee, but seemed receptive to hanging out.  Tinsley was thrilled, as well, and is really hoping Carole and Adam become a couple again so they can double date and travel with her and Scott.

A few days later, Ramona threw a party of her own for the launch of her skincare line, Ageless.  It was another event that Bethenny opted to skip and Ramona was pretty disappointed. Not only had Bethenny not shown up, she hadn’t even sent a message to congratulate her, and Ramona concluded that Bethenny didn’t support her fellow women in business, after all.

She also told Sonja that she was “worried” about Bethenny, because lately she seemed to either be crying or angry. But Sonja was far more worried about showing off her new shoe line. She figured that the people interested in Ramona’s skincare line would be the same target audience for her shoes, and she arrived with a pair for each of the women–except Dorinda and Carole, who’d given her a hard time about using the Morgan Family crest in her design, and surely wouldn’t appreciate such beautiful shoes, anyway.

Ramona wasn’t exactly happy that Sonja was using her party to hawk her wares, but she seemed to be enjoying herself, so Ramona let her have 10 minutes.  As the women tried on the shoes, talk turned to Luann’s upcoming cabaret show, and Dorinda took the opportunity to tell Luann how proud she was of her, and to apologize again for their argument.

Luann told her there was no need to apologize again, and returned her hugs and love, but during her interview, she said that she’d rather Dorinda take a long look at herself, and seek help with her drinking, instead of  continuing to apologize.

“I know Dorinda feels the need to apologize over and over again, but I don’t need a fake apology,” said Luann. “Show me that you’re doing something about the drinking problem. I feel bad about people that can’t cop to the bad behavior.” Pot meet Kettle?!

In her own interview, Dorinda wondered where her apology was, and said that Luann either lacks self awareness, or doesn’t care as much about their friendship as she claims. Kettle meet Pot?!

So, all in all, it wasn’t the most exciting episode, but there’s plenty of drama to come. Next week is the season finale, and all of the tension of the season promises to boil over during Luann’s cabaret act. Stay tuned!