Home Don't Be Tardy Delta Responds After Kim Zolciak and Brielle Biermann Slam Airline for Kicking Them Off Flight, Plus Did Kim Lose $30K While Gambling?

Delta Responds After Kim Zolciak and Brielle Biermann Slam Airline for Kicking Them Off Flight, Plus Did Kim Lose $30K While Gambling?

Delta Airlines is responding after Kim Zolciak and her daughter, Brielle Biermann, slammed the airline on social media after her family was booted from a flight set to take them from Los Angeles to Atlanta.

The Don’t Be Tardy cast members, including Kim’s husband, Kroy Biermann, were allegedly kicked off the flight after Kroy experienced a holdup with their family’s service dog while going through security at LAX.

Afterward, Brielle shared a series of tweets about the incident and lashed out at the airline.

“If I f**king miss my flight home I swear to God,” Brielle wrote before taking aim at Delta.

“Tommy at gate 27 delta LAX just kicked my WHOLE FAMILY OFF the flight to ATL bc we were waiting on my dad with our service dog to finish going thru security & kJ & kash started crying bc they thought we left him and Kaia was literally SH***ING AND HE KICKED US OFF!!!!! WTF,” Brielle continued in a now-deleted tweet. 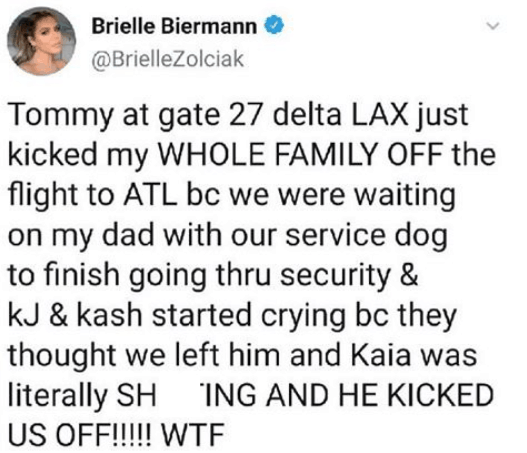 Kim and her children were already on the plane at LAX when a flight attendant demanded they get off. This left both KJ, 8, and Kash, 6, in tears according to Brielle.

After Brielle shared her angry tweets, her mother responded with a message of her own after quoting Brielle’s sentiments.

While several of Brielle’s followers questioned why she and her family would have a service dog, she did not offer any response.

Delta airline also responded to the tweets via a statement to Page Six.  “Mrs. Zolciak-Biermann and family elected to deplane their flight while her husband remained behind to provide proper paperwork for an emotional support animal,” said the airline.

The airline added that they tried to work with the Biermann’s to rebook them on another flight to Atlanta, “but they ultimately made their own travel arrangements.”

In other Kim news, a new report by Radar Online this morning is claiming the mother of six recently lost $30,000 while gambling in Las Vegas, just months after she was sued by American Express over an unpaid credit card bill of $215,000.

“Kim gambled away $30,000 in Vegas,” an insider stated about her alleged gambling at The Palms Casino. “She had some small wins here and there, around $250, but for the most part the money is gone.”

Don’t Be Tardy season eight is believed to be in production currently, and it will likely air on Bravo TV later this year or early next year.