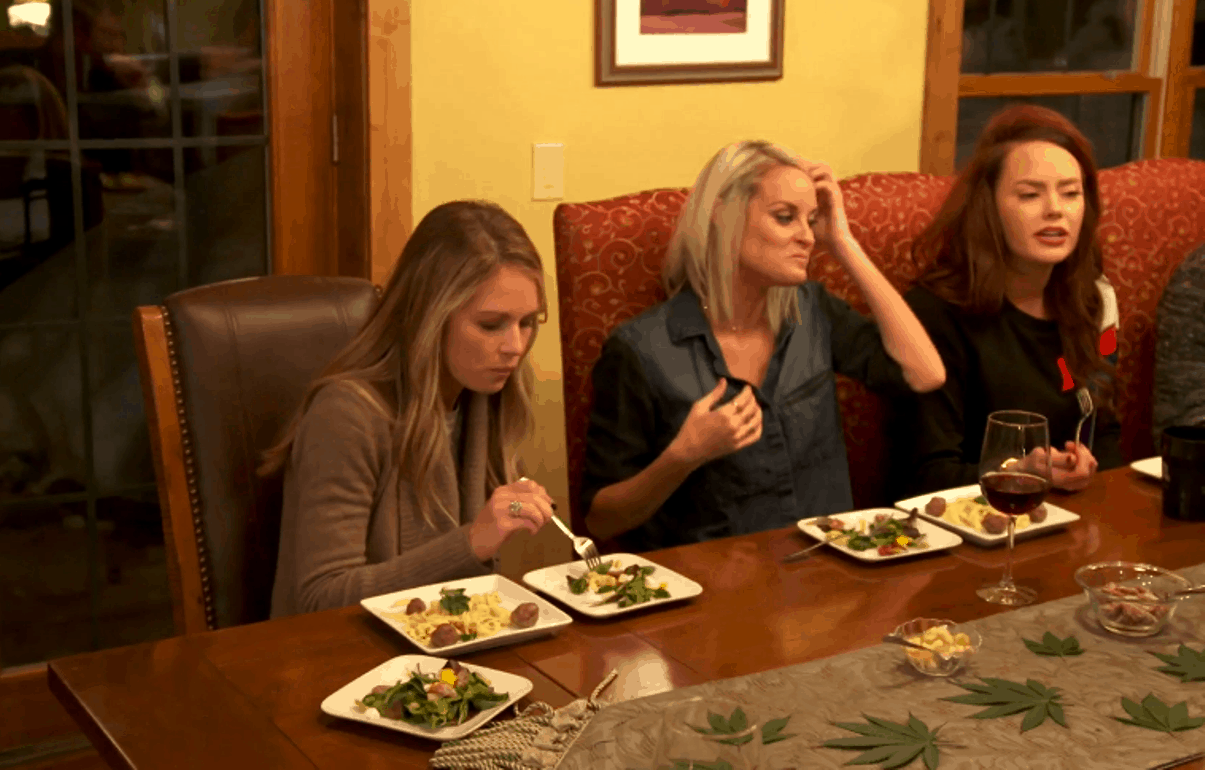 Steamboat Springs, Colorado doesn’t know what hit it. The Southern Charm gang continues their adventures in weed, I mean the slopes, on this episode…

The next morning, some of the crew rallies to head out to the mountains. Chelsea continues to not disappoint with her hat regalia, as she dons a small black animal on her head to keep warm. Craig is busy whipping up breakfast, which I am sure someone will tear apart momentarily. Kathryn is absolutely terrifying sans makeup—she DOES know that Bravo is filming her, right? Everyone wants to know if Austen and Madison hooked up the night before, but alas, Austen struck out…much like he did with his beer business. Heyo! Cameran is not sure if she wants to have any fun whilst skiing cuz she’s a mom now and it may be irresponsible for her to potentially injure herself on the slopes. Captain No Fun.

Everyone preps for the great outdoors by putting 16 layers of clothing on. OMG KATHRYN’S ENSEMBLE. She looks like she’s attempting to be a version of ‘Jessica Rabbit Goes Skiing,’ but in all actuality, she looks absolutely ridiculous. Craig mumbles that Kathryn looks like a Teletubby and he totally hit the nail on the head. I mean, Kathryn is even trying to keep her lewk going with the rental ski boots. Talk about high maintenance.

Danni and Kathryn, with her earmuffs, discuss the marijuana-infused dinner planned for the evening. Kathryn explains that weed is the reason she lost her children for a while, and she thinks it’s super rude that no one is even acknowledging the fact that this could make her uncomfortable. The subject changes to the Kathryn/Whitney hook-up that Whitney continues to deny. Kathryn has had it with him pretending they didn’t sleep together. She shows Danni some texts Whitney sent to her, and he’s very clearly the aggressor in the situation. Take this Whitney text, for instance: “Baby my sh*t is asleep or waiting for you. But will be here for you.” OMG. In case you didn’t realize, “my sh*t” would be what Whitney refers to as his penis. Kathryn’s got the receipts, ya’ll.

While the rest of the crew is having a ball in Colorado, back in Charleston Naomie receives a phone call from Ashley Jacobs. Yes, you read that right. Perhaps that’s her punishment for denying the group trip? Naomie explains she “never had a colonoscopy,” but she assumes it would be better than meeting up with Ashley. Ashley begs Naomie for a chance to clear the air and Naomie agrees to meet the crazy lady for a quick drink.

In the meantime, dummy Austen falls victim to “ringing the bell” at the ski lodge, and so he has to buy everyone in the bar a shot. Whatta guy. It’s as if he has oodles of money and actually works for a living. LOL.

Talk about an awkward meeting. Ashley, who has a new short hairdo, embraces Naomie and calls her a “straight shooter.” Someone desperately wants to be back on the show, huh? Naomie listens as Ashley begs for a second chance, and then Naomie lets Ashley know that her erratic behavior is totally unacceptable. Ashley tells Naomie that she’s thinking about attempting to smooth things over with Kathryn because she “doesn’t want any enemies.” It may be too late for that, huh?

Back in Colorado, the only people excited for this weed dinner are Shep and Austen. They’re like Cheech and Chong…or like 15-year-old boys. They greet the cannabis chef in their robes (weird), and Shep asks for one course to be kinda “wild.” Typical.

Before dinner, Craig gets in some alone time with Madison. She lets him know that he’s a hypocrite trying to give advice about a relationship he doesn’t even know. Something tells me this weed-infused dinner is not gonna end well. I mean, even the wine has CBD in it. I wonder if Whitney will partake in tonight’s shenanigans…

When Madison strolls in for the dinner, Austen goes all gaga eyed…well at least as much as he can being that he’s 1,000% stoned and can barely open his eyes. Madison asks Shep for a gummy, and then Madison uses this time alone with him to address the fact that Shep called her white trash. Give the people some gummies and the truth flows freely! Madison tells Shep that he’s a bad influence on Austen, and Shep states that Madison brings out the bad side of Austen. Shep says, “You’re both attractive humans and that may be the only thing you have in common.” Then, he ends it with an apology to Madison.

After a whole lotta hair teasing, Kathryn finally makes her grand entrance for dinner. Kathryn should be able to breathe a sigh of relief, as nothing on the table is infused until you add it in yourself. Naturally, Shep is peer pressuring everyone to add the infused dressing and butter to their dishes, but Cam the nun explains that her “mojo is retired.” Thus, she will not be partaking.

Kathryn confronts Austen and tells him that she’s “ok with being around it,” which is a passive-aggressive way of letting him know he’s a d-bag for not asking her if she’s alright with the whole thing considering her past, which includes losing custody of her kids following a positive drug test. When Kathryn doesn’t get nearly enough coddling for this, she decides to go into the archives of her phone and read over an article from three years ago when she was at her lowest point thanks to weed. In this article, Whitney calls Kathryn “a drug addict, violent sociopath.”

Kathryn simply wanted to “remind” herself of her darker times (WHY), and then she just takes off from the dinner table. Craig, of all people, runs to her aid and hears Kathryn out. She feels like this dinner brought up a very “traumatic time” of her life, and she really doesn’t appreciate that no one asked if she’s cool with the whole thing. Kathryn jumps from the pot to Whitney and uses this platform to announce her disgust with his denial of their sexual encounters. Kathryn tells Craig that, upon being confronted, Whitney said, “We didn’t have sex, but I’m flattered.” Holy ouch. Then, Kathryn lets Craig know, “I just feel overwhelmed a little.” She promises to return to dinner once she gets herself feeling right again.

Shep behaves like a buffoon during dinner, and when Craig re-enters after talking with Kathryn, he explains that Kathryn’s having “some blasts from the past.” He’s trying to explain a highly serious, sensitive topic to the super stoned group, and then he spits out that it’s not about Austen as much as it is about Whitney. Whitney uses that as his exit, but Craig calls him out. “Have you ever said sorry for saying the things you said about her? What does it cost you to say you’re sorry?”

Whitney calls Craig a busybody, which he kinda is, but Craig’s intentions are sweet…you can tell. Whitney actually DOES check on Kathryn, which I find shocking. He finds her outside on the porch and confronts her. Kathryn, in her truly dramatic fashion, does not want to talk to him and so Whitney simply walks away. There’s a third part of this Colorado trip and I am sure the next episode will address this Whitney/Kathryn debacle at great length. Fingers crossed!