The RHOD Recap: D’Andra Gets Roasted by Her Friends and Family 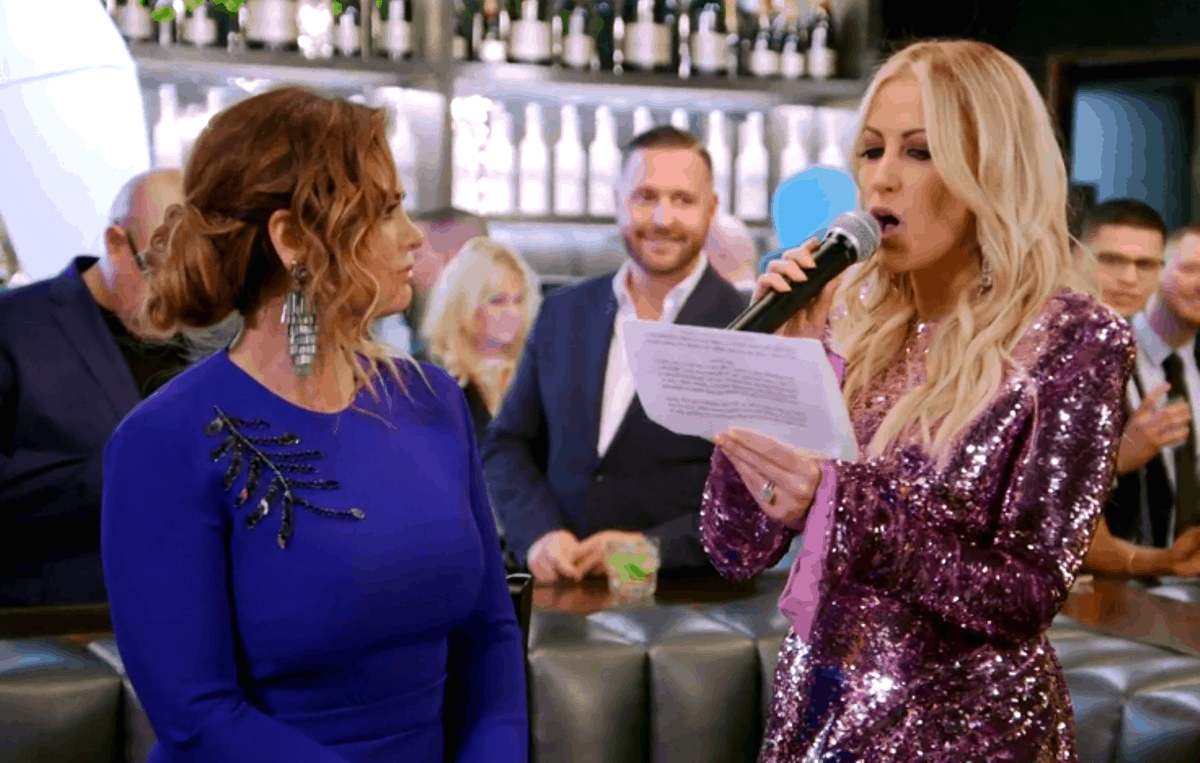 The ladies of The Real Housewives of Dallas returned last night, and it looks like everyone is maturing–especially D’Andra! Ba dum bum shhh! Sorry, I couldn’t help myself.  She wanted to get roasted, right?

Our girl celebrated the big 5-0 in style last night, but first, she needed to make amends with her former bestie, LeeAnne.  These two have been through plenty of ups and downs over the years, but before the “friend-tervention” Stephanie staged last week, the two hadn’t spoken since the reunion, despite agreeing to move on and be friends again.  This plan was supposed to include a few sessions with a relationship therapist that never took place.

The two women sat down privately during last night’s episode in an attempt to move on once and for all.  LeeAnne said that she was still “struggling” with hurt feelings and anger following the accusations D’Andra made last season about Rich cheating.  D’Andra said that she ‘appreciated’ LeeAnne’s position, and added that they were both hurt for different reasons.

After all, D’Andra was still feeling some type of way about LeeAnne telling the rest of the group that she was broke and only had $200 to her name.  However, D’Andra said that she owned her part in the demise of their friendship, and she admitted that it wasn’t the way a good friend should behave.  But that didn’t quite cut it for LeeAnne.

She told D’Andra that she needed for her to say that she never should have brought Rich into it and that she knows he’s not a cheater.  But it was clear that that was a bridge too far for D’Andra.  During her confessional, D’Andra said that she couldn’t take back her allegations about Rich because ‘it was the truth she knew.’  To LeeAnne, D’Andra simply said that she shouldn’t have involved herself in her and Rich’s relationship, and she assured her that she had no “nefarious intentions” in doing so.  In fact, she said, she’d only been trying to help when she voiced her concerns.  But LeeAnne said that the allegations hadn’t benefited her at all.

Finally, D’Andra said she was sorry (AGAIN) and asked if they could please just move on.  LeeAnne agreed, but she added that she needed for D’Andra’s actions to “match her words.”  This basically meant that she was enjoying this contrite side of D’Andra immensely, and she needed her to continue groveling and kissing her butt!  She added that she was hurt that she hadn’t heard from D’Andra at all in the two weeks since they’d talked at Stephanie’s.  See what I mean? D’Andra assured LeeAnne that she’d only refrained from reaching out to give her space, as she’d said herself that she wanted them to take “baby steps” on their road back to friendship.  LeeAnne seemed to accept this, and she told D’Andra the ball was in her court going forward.

To D’Andra’s credit, she picked the ball up and ran with it by inviting LeeAnne to her birthday roast.  LeeAnne agreed to attend, but she said she wouldn’t partake in the festivities as they ‘weren’t in a position’ for LeeAnne to be roasting her.  However, during her confessional, she said that she doubted it would be a true roast, anyway, and it would likely rather be a parade of people lining up to ‘blow smoke up D’Andra’s a**.’

But D’Andra took the dig in stride.  She simply plastered on that southern belle smile and calmly informed LeeAnne that things were actually better between her and Dee since she’d handed the business over to her daughter.  Dee had also agreed to take less of a salary so that D’Andra could put more money into the business.  The outing ended with the two ladies toasting to better times ahead.

The ups and downs of all the ladies’ various relationships played a pretty big role in last night’s episode.  We saw both LeeAnne and newbie Kary have date nights with their guys.  LeeAnne and Rich looked ahead to their wedding day, and they reminisced about their early days as a couple.  LeeAnne said she knew Rich was the one when he refused to sleep with her on the first date, which she found so endearingly sexy, she was moved to jump his bones on the spot!  These two seem to really have a great time together.  And although Rich has been married three times before, and joked that they’d likely be in ‘divorce court’ in five years, it’s pretty clear that his marriage to LeeAnne will be his last.

As for Kary and her husband, Eduardo, they both agree that their decade of marriage hasn’t exactly been easy, but they’re able to laugh off their troubles, and hey, that’s half the battle.  However, they did make the waitress a little nervous as they bickered over whether to hear the specials right away or to wait until after they’d had their appetizers.  It goes without saying that Kari got her way.

We also got a glimpse into Brandi’s relationship with her daughter, Brooklyn, who is 10 going on 35.  That girl has got attitude for days, and it’s all directed at her mama.  Brandi’s at a loss about how to handle her feisty ginger mini-me.  And as the saying goes, when the going gets tough, the tough go shopping.  Brandi said she’s tried discipline and punishment as a way to quell her daughter’s pre-teen moodiness, but it only seemed to make things worse.  So, she decided to give bribery a try.  To the surprise of absolutely no one, that didn’t work, either.

All in all, it appeared that the ladies were dealing with a lot, so can you guess what that means, viewers? That’s right–it’s time for a girls’ trip (as if they don’t already have enough problems).  Kary announced at D’Andra’s birthday party that she was gifting D’Andra the getaway that she couldn’t afford this year due to the mess of a business her mother left her.  She invited all of the ladies to her and Eduardo’s estate in Careyes, Mexico to celebrate D’Andra’s 50th–but first, D’Andra had to make it through the roast.

Luckily for her, LeeAnne was pretty dead on about how the evening would go.  Most of the supposed roasters stuck with light joshing–and yes, plenty of smoke blowing–as they proclaimed their love for D’Andra.  In fact, the only real digs were thrown at those adjacent to D’Andra, rather than at the woman of the hour herself.  Stephanie basically called D’Andra’s husband, Jeremy, a kept man, and she proclaimed D’Andra was his “sugar mama.”  Brandi turned her attention to Dee, and in a pitch-perfect imitation of her thick Texas accent, she suggested that the business she’d turned over to her daughter be renamed “hard to sell, good riddance.”

Actually, it could be said that the biggest dig of the evening came from Jeremy, who gifted his wife a box filled with 50 donuts.  D’Andra certainly thought it was sweet as she happily sampled each one.  However, her friends thought that, as 50th bday gifts went, baked goods were the wrong way to go. Their husbands better take note–they all said they’d prefer diamonds to donuts for their own big days.

As the night started to wind down, LeeAnne announced that she wanted to roast D’Andra after all.  The party-goers immediately became visibly uneasy as LeeAnne made her way to the mic, and who could blame them?  There was just no telling what she might say.  They groaned collectively as she opened by saying that turning 50 “sucked” and welcomed D’Andra to the club.  But to everyone’s surprise, she kept it pretty classy.  She said that she wanted to moved forward with their friendship, despite the stumbles they’d taken lately.  Then, she presented D’Andra with her gift: two candles, one for hope, and the other for forgiveness.  Aww–sweet! We’ll see how long it lasts.

My guess is not long.  The ladies embark on their trip to Mexico next week, and LeeAnne and Kary get acquainted in what looks like a Texas-sized clash of the titans! Stay tuned…