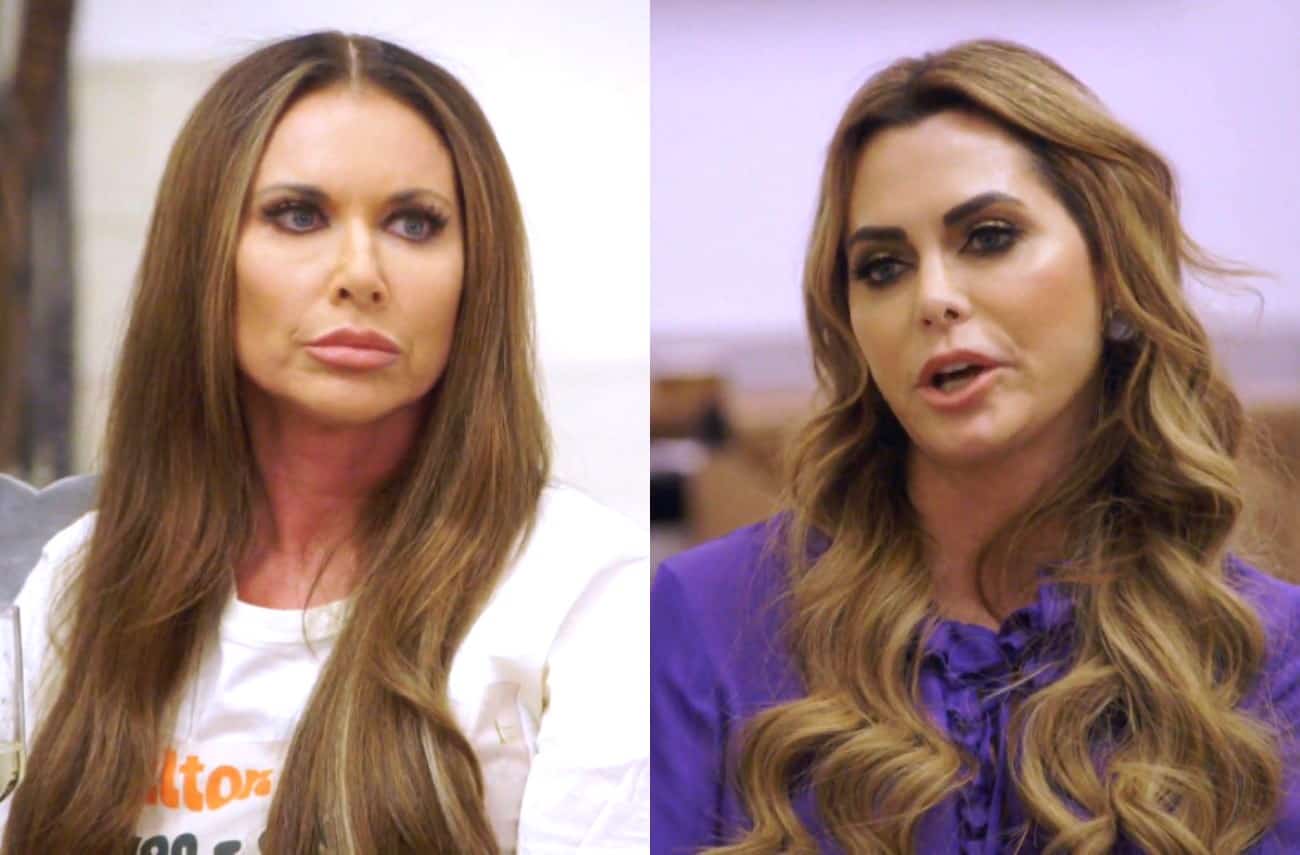 Well, they say everything is bigger in Texas, and the ladies of The Real Housewives Dallas proved it when they returned last night with big hair, big changes, and BIG drama for season four!

For starters, LeeAnne is ‘back to her roots’ with lighter hair–and a lighter attitude to match.  Oddly enough, her former bestie, and doppelgänger, D’Andra lightened her locks, too.  They didn’t even plan it.  In fact, LeeAnne revealed that the two hadn’t spoken in the three months that had passed since they made up at last season’s reunion!

LeeAnne is still sore over D’Andra sharing her concerns about Rich cheating multiple times with multiple different women.  But LeeAnne has bigger fish to fry these days.  Last night, she was a mere seven weeks out from exchanging vows with Rich.  From the looks of things, it promises to be a fabulous event.

As for D’Andra, she’s feeling decidedly less happy with her life choices.  They say be careful what you wish for, and she was having some pretty serious regrets about taking over the family business.  She had no idea that it was basically headed for financial ruin by the time her mother, Dee, handed it over to her, and she was beginning to wonder if she may have been set up to fail.  She said she feared that if things didn’t turn around soon, she would need to close up shop in just a few months’ time!

D’Andra was clearly nervous about the prospect of a failing business, but her husband, Jeremy, thought he had the solution–they just needed to tighten the purse strings a bit.  Has he met his wife??  The girl is used to a certain amount of luxury.  She’s pretty sure that Jeremy has gotten used to the finer things as well, and it’s up to her to provide them.  Jeremy’s a sweetheart and his artwork is adorable, but let’s face it, it’s not going to keep new luxury cars in the garage every year.

But D’Andra felt the solution was pretty simple.  She needed to try to convince Dee to take a little less than the salary she’d negotiated when she handed the reins over to her daughter.  Dee stipulated that she be paid $60,000 a year to cover her expenses, which included a housekeeper, the dues for two private clubs, and all the fillers she needs.  The mother-daughter duo still has a fairly strained relationship.  But, as always, Dee came through when her daughter needed her–ish.

The two women got together at D’Andra’s late step-father’s gravesite to pay their respects on the sixth anniversary of his death.  Dee said she was willing to take a pay cut so that D’Andra could dig her way out of the financial hole her mother had left her in.  Big of her, right?  But D’Andra’s no fool.  She immediately smelled a rat.  She suspected her mother was playing her, and she’s probably right.  But since Dee controls the sizable trust her husband left for D’Andra, and in the interest of her future financial security, D’Andra decided she was willing to play along.

Across town, Brandi was feeling the strain of mother-daughter relations, as well.  She’s got her hands full with her growing ginger brood–especially her 10-year-old mini-me daughter, Brooklyn, who’s 10 going on 30, and is giving her mother a run for her money.  The little girl is positively chock full of sass and attitude.  Hmmm–I wonder where she got that from?

Stephanie and Travis are still as adorable as ever, although he’s apparently been going through a major midlife crisis.  He’s been working on skydiving and everything else he can think of to try to hold onto his youth in the face of his impending 50th birthday.  Stephanie thought he and D’Andra should get together to commiserate.  She said she felt they were two sides of the same coin, as both took over successful family businesses, and he seemed to constantly be at odds with his father as D’Andra was with Dee.  But he took over the business and grew it exponentially, and Stephanie felt that he could give D’Andra the inspiration she needed to do the same.

It seemed Stephanie had quite a few plans for D’Andra, including a “friend-tervention” to get her and LeeAnne back on speaking terms.  Travis wisely cautioned his wife against this, but well, she’s an optimist.

Our girl Kameron was still living on her best life on a pretty, puffy pink cloud.  She was planning a cruise with her husband when we caught up with her–but NOT the $400 all-inclusive kind that the rest of us take, okay?  This meant that she would miss the friend-tervention, but don’t worry, she’s not suffering from FOMO.  Which, if you’re unfamiliar, means fear of missing out, and not fun of missing out, like Kameron thought.  All the same, she still made time to leave a little drama in her wake before she set sail.  She called LeeAnne to “warn” her about Stephanie’s plans, you know, “as a friend.”

We also got to meet the newest member of the RHOD crew last night.  D’Andra’s friend, Kary, is a fun-loving bad-a** who loves to dance on tables and couldn’t care less what Dallas society thinks about it.  She even stood up to LeeAnne.  She once told LeeAnne point blank that she was ‘talking out of her ass’ when she made those unsavory allegations about Cary’s husband Mark’s supposed relationship with certain men around Dallas.  I think I love her.

When the night of the friend-tervention finally arrived, both Stephanie and Brandi were hopeful it would work out.  After all, even Brandi and LeeAnne managed to make amends after their blowup last season.  The two ran into each other at a mutual friend’s baby shower, and realizing what was truly important in life, they decided to let bygones be bygones.  She was certain that after so many years of friendship, LeeAnne and D’Andra could do the same.  Stephanie agreed.  After all, she reasoned, the two had dyed their hair an identical shade of caramel, and that had to count for something, right? Eh–not so much.

LeeAnne was still pretty upset with D’Andra about those allegations about Rich, and it turned out that Rich got back at D’Andra, and used Jeremy to do it!  D’Andra revealed that right after she and LeeAnne made up at the reunion, and even agreed to go to relationship counseling, Jeremy received a disturbing text from Rich.  In it, he threatened to tell D’Andra all about “pretty Jessica,” whom he accused Jeremy of having an affair with.  While he claimed that he usually practiced more ‘discretion,’ Rich said he wanted D’Andra to know that this woman was “everything she’s not” because he would “not tolerate” the “baseless b.s.” D’Andra had been spewing.  Well, alright then!

D’Andra didn’t believe Rich’s claims, just like LeeAnne didn’t believe D’Andra’s previous claims against Rich, and LeeAnne said she needed D’Andra to own what she’d done, just like Cary needed LeeAnne to own what she’d done with her baseless allegations against Mark.  You see a pattern here?  These aren’t women who like the taste of their own medicine.

The two women went back and forth a bit, but ultimately decided that with time, they would be able to move on to a new friendship, and to that end, they toasted to the future.

Well, we’ll see how long that lasts, but my prediction is that it implodes into a big, ole Texas-sized mess–especially since D’Andra has invited her friends to roast her for her upcoming 50th birthday (is she crazy??).  From the looks of things, LeeAnne seems more than happy to oblige.  Stay tuned!

TELL US – THOUGHTS ON THE RHOD SEASON 4 PREMIERE EPISODE?