Home Don't Be Tardy Don’t Be Tardy’s Kim Zolciak Reveals if Daughter Ariana Biermann Will Attend College and Gushes Over Her “Incredible” Homecoming Look as She Stuns in Pink Minidress and Sky-High Heels, See PHOTOS!

Don’t Be Tardy’s Kim Zolciak Reveals if Daughter Ariana Biermann Will Attend College and Gushes Over Her “Incredible” Homecoming Look as She Stuns in Pink Minidress and Sky-High Heels, See PHOTOS!

Don’t Be Tardy star Kim Zolciak took to Instagram this weekend to gush over her daughter Ariana Biermann who attended her school’s homecoming dance.  Kim also revealed if Ariana will be attending college.

Kim, 40, posted an image of 17-year-old Ariana, who recently dropped 30 pounds, and her date. Kim applauded her daughter’s look.

“I can’t take it!! [Ariana Biermann] You look incredible,” she wrote. “HUGE THANK YOU to [Sherri Hill] for always having the BEST prom/homecoming dresses ever!!”

Ariana wore a skin-tight Sherry Hill minidress, which she paired with sky-high heels.

And while Ariana’s older sister Brielle Biermann chose to focus on her influencer career after high school and skipped college, Ariana will be attending college.

Kim broke the news as she admitted she hasn’t been handling Ariana’s final year of high school very well, especially because it means she will soon be leaving their family home in Georgia and heading off to college out-of-state.

“This year is not easy for me. This is Ariana’s last homecoming, she turns 18 next month, graduates in May, Head’s off to college in another state far away,” Kim explained.

According to Kim, she and her family may relocate after Ariana graduates as well because it is her dream that they “all live on the same street forever.”

Meanwhile, Ariana also shared a couple of photos of herself posing alongside her friend and date, Camden Croucher, and she quickly sparked rumors of a potential romance with him.

Although Ariana, who wore her new makeup line, KAB Cosmetics, to the dance, made it clear that she and Camden were not an item by labeling him her “BFF,” a number of fans seemed suspicious about a potential romance. One person suggested Camden was her “new man.”

In response, Ariana told the person, “Read my caption hunni this is my best friend.”

Camden also left a comment for Ariana that certainly didn’t help with the rumors of a romance. 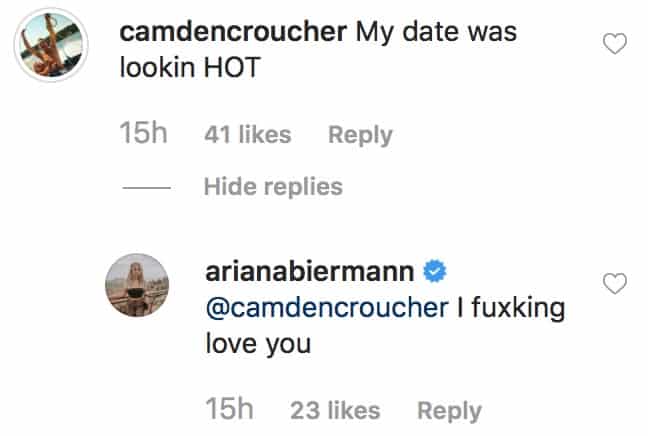 Don’t Be Tardy is expected to return to Bravo TV for an eighth season sometime next year.