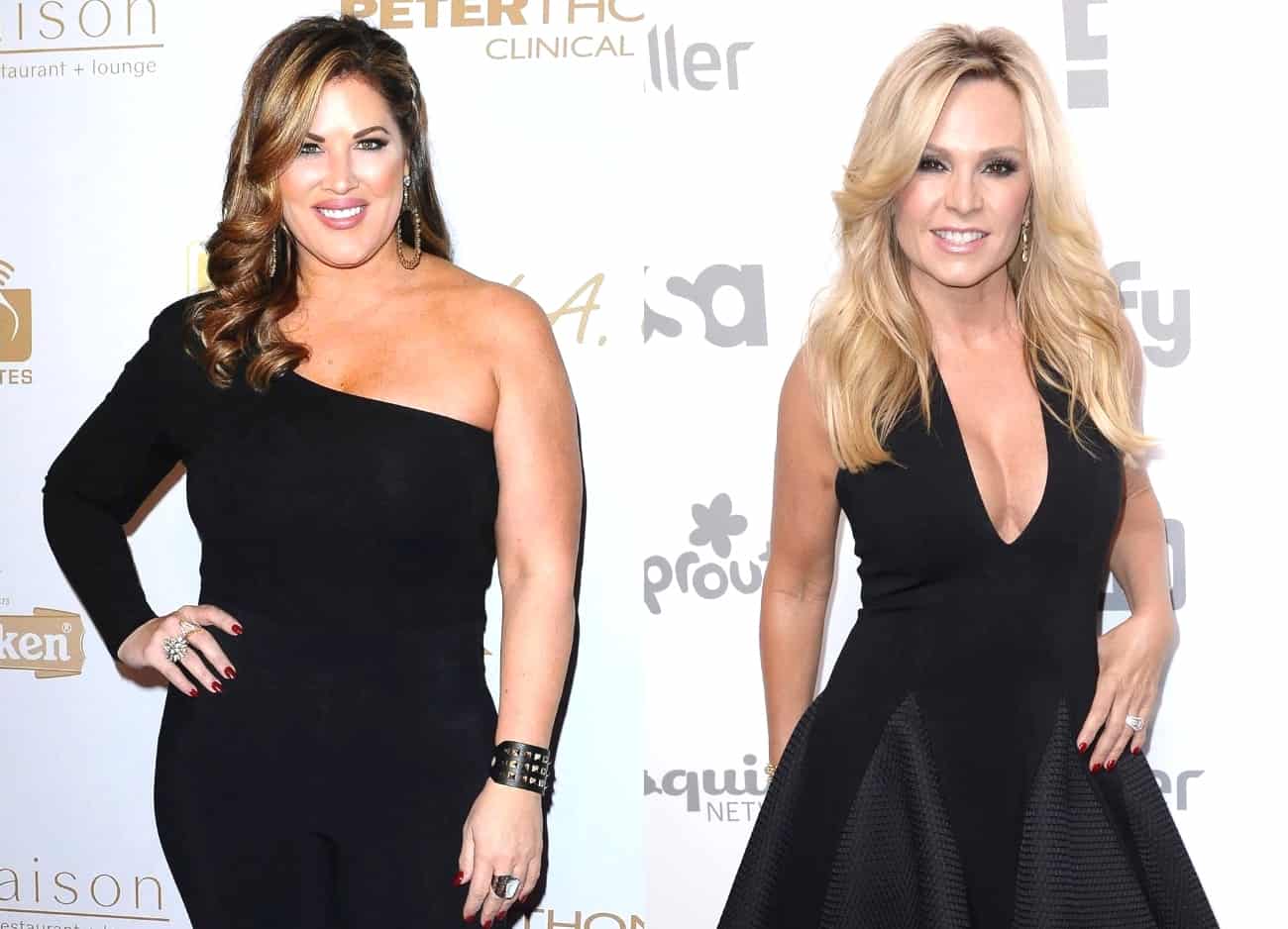 Will the fighting ever end? As fans saw on last week’s episode of the RHOC, Emily sought health and fitness advice from CUT Fitness owners Tamra and Eddie Judge who, after weighing her, determined she was “obese.” Since the scene aired, fans went wild on Twitter, coming to Emily’s defense and claiming she wasn’t dangerously overweight like the fitness experts claimed.

Tamra then proceeded to slam Emily, accusing her of “playing victim” and claiming she badmouthed her and Eddie after they tried to help her. Emily strongly denied this, and as we have reported, Emily praised Tamra and Eddie for helping her during her appearance on Watch What Happens Live last week.

Since the online argument took place, it appears that Tamra has blocked Emily from her Twitter.

“And now I’m blocked 🏆” the attorney-turned-housewife wrote after calling Tamra out for criticizing her seemingly innocent comment to a fan’s post.

A fan account of the show, realitytvcorner, then posted a screenshot of the tweet to their own Instagram page and overlayed the image with their own words regarding the situation. Emily saw the post and put it into her Instagram Story on Friday.

On top of the screenshot, realitytvcorner wrote, “#tamrajudge has been making it really hard for people to like her! Why do you give a s**t about someone else’s body so much to the point of blocking them on Twitter? I feel she was looking for an excuse to hate Emily and here it was. There are people who need drama in their lives on a daily basis or they don’t feel productive or at peace.” 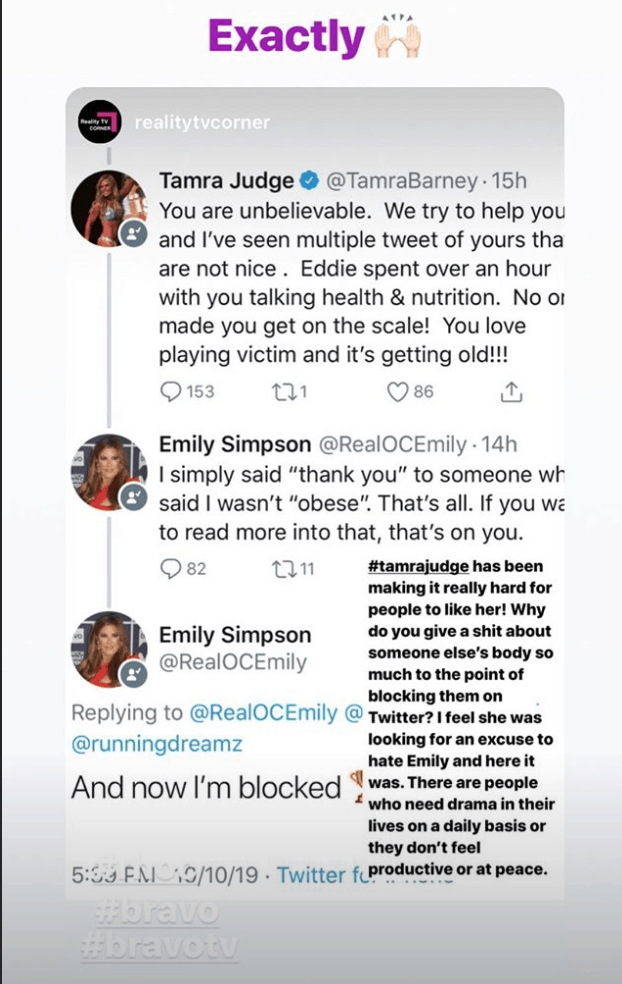 This isn’t the first time Tamra and Emily have been at odds regarding the “perfect physique.” In a past episode this season, it was revealed that the fitness guru referred to Emily as “Shrek” while out to lunch with fellow Orange County housewife, Gina Kirschenheiter.

Following Emily’s Instagram Story post, she shared an update on her fitness goals, stating she is now working with a new trainer who has been helping her shed the pounds with modified workouts due to her “arthritis” and hip issues. In fact, she confirmed she will be having hip replacement surgery soon.

“It would be difficult for me to work out like I used to because I was in so much pain from severe arthritis. My mobility was severely compromised due to the cartilage in my left hip basically deteriorating away. I could barely move without wincing,” Emily shared. “My hip replacement surgery is coming up soon and my goal is to get in the best shape of my life once I recover fully!”

Thank you to all of you for your encouraging words and support! This summer I contacted @paulinastein and asked if she would train me. I told her I was at my highest weight ever, my body fat percentage was higher than it had ever been and it would be difficult for me to work out like I used to because I was in so much pain from severe arthritis. My mobility was severely compromised due to the cartilage in my left hip basically deteriorating away. I could barely move without wincing. But I decided to get mobile regardless of how slow I moved or how little I could endure. . She modified workouts for me and met me at 6:15am three times a week in the cold and darkness to train me. She pushed, encouraged, and was never late and never cancelled on me. Today I weigh much less and my total inches lost overall is around 13 inches. My clothes are fitting again and I feel stronger and healthier. I still have a long way to go but I’m heading in the right direction. . My hip replacement surgery is coming up soon and my goal is to get in the best shape of my life once I recover fully! . If you need a kick in the pants, or don’t know how to start or where to begin, My trainer @paulinastein recently launched her new “Sexy Legs and Booty Gains Ebook”! Her leg and booty workouts can be done at home or the gym, and will work for you even if you’re a beginner or a pro athlete! My legs and booty have transformed due to these workouts! Trust me, the burn is real! . Her ebook is only $29.95! Go to her website at www.paulinafitness.com to purchase and use discount code “Emily10” for 10% off!  Join me on this 30 day challenge to transforming our legs and booty! Perfect time to start just before the holidays! Who’s with me?! 💪💪 we can do this together! . #rhoc #workout #fit #fitness #health #arthritis #youcandoit #womeninspiringwomen

Catch new episodes of Real Housewives of Orange County every Tuesday at 9 p.m. on Bravo TV.