The Real Housewives of Potomac star Monique Samuels has been charged with second-degree assault weeks after getting into a physical fight with her co-star Candiace Dillard.

If you recall, it was reported last month that Monique and Candiace got into a physical altercation amid filming on the RHOP season five.  It was alleged that Candiace tossed a drink at Monique during a cast event at a vineyard, and Monique allegedly retaliated by dragging Candiace and slamming her face on a table.

E! News is now reporting that Candiace, 32, went to cops and filed a criminal complaint against Monique, 36, on November 7. The commissioner apparently found probable cause in Candiace’s complaint which resulted in a summons being issued for Monique to appear in court on December 23.  According to Candiace, the incident occurred on October 16.

While in most states, people usually get arrested before getting charged, the law works a little differently in Montgomery County, Maryland. According to PEOPLE, Monique has yet to be arrested. However, if a judge finds probable cause during her court appearance next month, that would lead to her arrest and possible jail time for the assault charge.

While the ladies, who began feuding last season, have mostly remained mum since the altercation took place, their attorneys are speaking out on their behalf.

“At this time, we do not want to say too much and just allow the criminal process to play out. We only ask everyone to pray for our client Candiace and her family,” Candiace’s lawyer James L. Walker, Jr. said in a statement to PEOPLE.  “The physical assault, humiliation and emotional distress have all been very painful and difficult for Candiace, as it would be for anyone attacked so viciously… We also pray that Monique will get some help.”

As for Monique’s attorney, A. Scott Bolden, he defends his client by stating she was simply defending herself.

The allegations by Candiace are “completely one-sided, inaccurate and unwarranted,” said Monique’s lawyer. “Ms. Dillard has a public reputation for aggressive, belligerent and threatening behavior that has played out repeatedly on the Housewives of Potomac for millions of viewers to see for themselves.”

He continued, “My client did nothing but defend herself in the face of more very aggressive behavior by Ms. Dillard. If this event occurred during taping of the show, I am confident that the video will bear all of this out. My client has every right to file for a counter criminal summons, as well, and will consider doing so… Going forward, we hope that Ms. Dillard seeks the help she needs to avoid creating these kinds of unsafe and unfortunate circumstances in and outside of the workplace.” 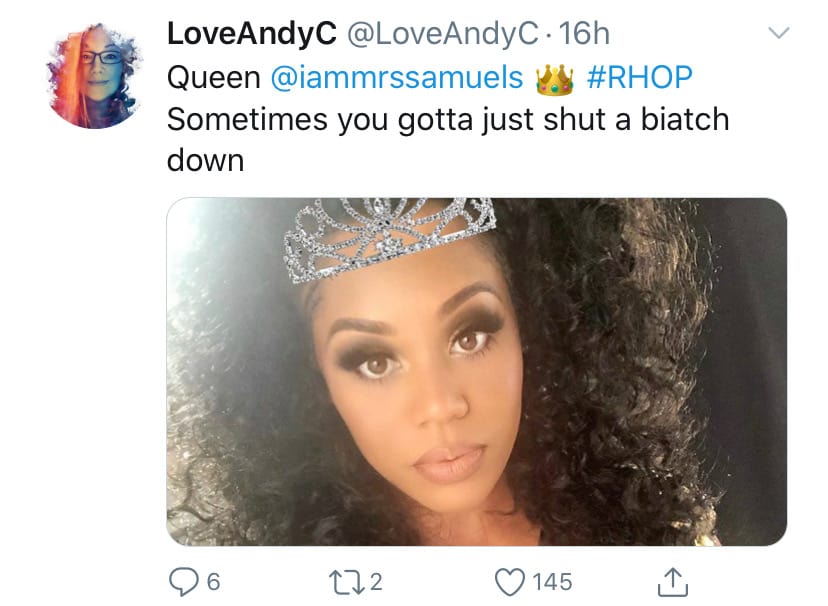 Candiace also put out a cryptic tweet on Thursday, the same day she went to authorities to press charges against Monique.

“All this energy to attempt to take me down while your odors fester around innocent people. Priorities, sis. #amessage #aGoodLaughWasHad,” tweeted Candiace on November 7.

All this energy to attempt to take me down while your odors fester around innocent people. Priorities, sis. #amessage #aGoodLaughWasHad

The new season of the RHOP is expected to air on Bravo next year.