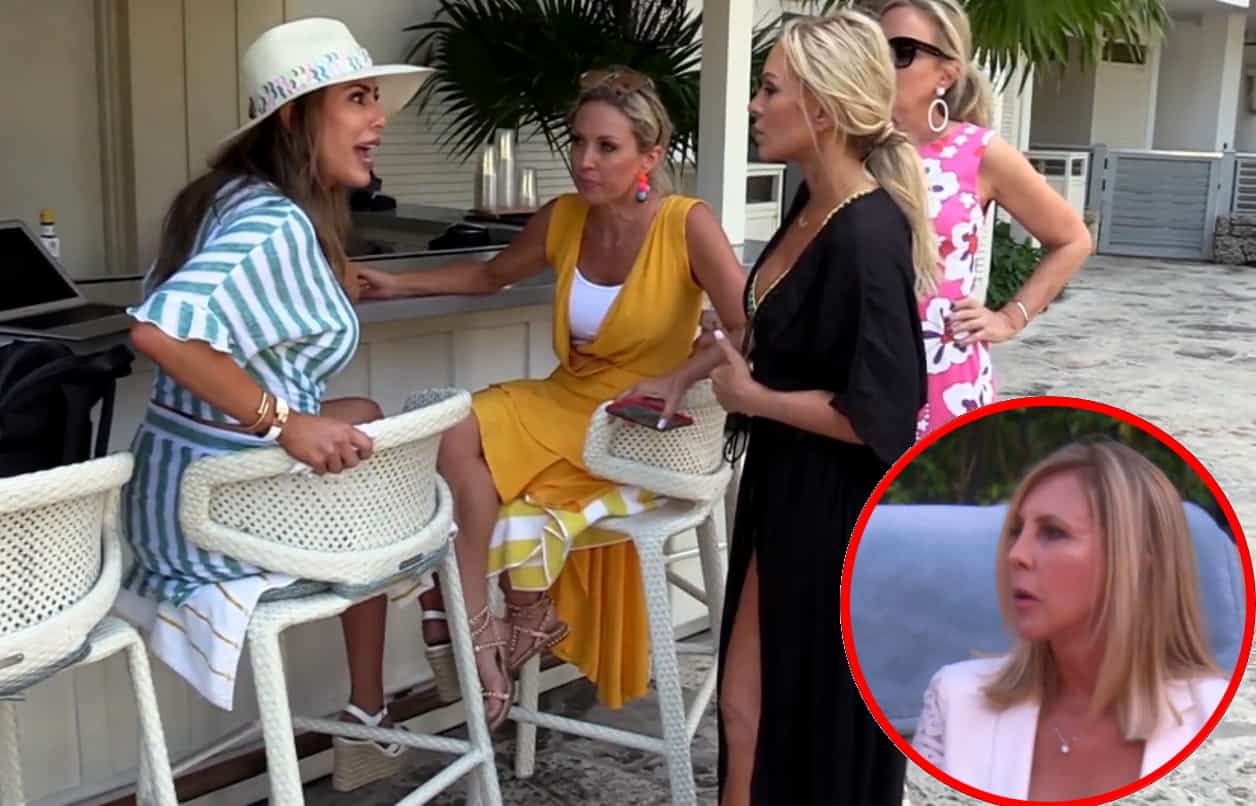 On this episode of the Real Housewives of Orange County, the ladies bring the OC, and the drama, to Miami.

It’s lunchtime for Kelly and Braunwyn. Nice of Braunwyn to dress up for the event, huh? Kelly straight-up tells Braunwyn that she doesn’t want to go to Miami because it sounds like “Game of Thrones.” She would rather skip hanging with the witches of the OC because she doesn’t want to surround herself with mean women. Hello Pot. Meet Kettle.

Gina is so far up Tamra‘s a*s it’s not even funny. The two are out shopping for the Miami trip and begin discussing how awkward it would be if Kelly actually shows up on the trip. Little do they know that Braunwyn is practically begging Kelly to come. She tells Kelly, “You need to stop engaging and hang out with me.” I am unclear why Braunwyn wants Kelly there so badly, but I am sure it has to do with #ratings.

Braunwyn lets Kelly know, “I have your back.” The problem is, Kelly may need more back up. Kelly finally gives in and agrees to join in on the fun. Oh, I am sure this news is gonna please Tamra. She is so annoyed that Kelly involved herself in the whole Jim Bellino lawsuit and doesn’t like that someone realizes Tamra is the true sh*t stirrer.

Even though Shannon filed for divorce almost two years ago, it has not been an easy journey. Today is the last day of court for Shan and her ex, David. She is hoping that they are able to settle so that Shannon can just move on with her life. Watching their relationship crumble through the previous seasons’ segments reminds me how much of an a*shole David is. He really put her through hell. Shannon deserves to be able to start fresh.

Vicki has a big surprise and has decided to host the ladies…minus Kelly and Braunwyn. She does a GREAT job of making an a*s out of herself when she mispronounces falafel, and my eyes won’t stop rolling.

The big surprise is that Vicki is engaged. It takes the women a good 15 minutes to realize that Vicki is wearing a giant rock on her finger. Morons. When Shannon strolls in late, she fakes excitement for the ring and begins to tell her contentious sob story about court… which ultimately resulted in a financial settlement she was happy with. Shannon shares that she got an email from David post court. In the email, David tells Shannon that he is “so proud of everything” she has done and Shan becomes emotional. She is happy to finally get some support from that guy. Why? I am unsure…

While inside at Vicki’s, Gina shares with Emily that lately Matt has been bringing his “A-game.” Gina swears that Matt has changed, in a good way, and she believes that Matt will never cheat on her again. Emily is having a hard time listening to this because, in case you forgot, she used to be a divorce attorney back in the day.

The tres amigas sit on the sofa and discuss the upcoming Miami trip. I am proud of Shannon for calling Vicki out. Braunwyn invited Vicki to Miami, but Vicki couldn’t invite her to lunch at her house? RUDE. The ladies fret once they realize Kelly is actually going to be joining them on the trip and Tamra reminds everyone that, “Me and Shannon can’t legally talk to her” since she is trying to get involved in the lawsuit. Anything they can say can be used against them and I am hoping that this is when Tamra and Shannon finally stop talking once and for all. Fingers crossed!

Braunwyn and her hubby Sean are prepping for Miami. Braunwyn is packing. Sean is giving her opinion even though, according to Braunwyn, “Sean has no sense of fashion.” Gee, Braunwyn, you can say that again. I mean, the guy wears ridic necklaces and shirts that rival Cam from Modern Family’s wardrobe. Braunwyn has hopes of Vicki being nice and perhaps learning her name. In all fairness, Braunwyn’s name IS really silly, but she deserves a little respect.

Like a middle school girl, Tamra rides her bike over to Vicki’s place. Vicki has her kids, Michael and Briana, over and we are reminded just how much they really don’t like her. Briana explains that she is healthier now that she has moved away from Vicki, er, I mean to the East Coast.

Tamra invites herself over to the family luncheon, and when Vicki excuses herself for a minute to grab a camera and capture the family with a photo, Tamra chats it up with Briana and makes sure that Vicki is truly happy about this whole engagement thing. Briana believes that her mom is the best version of herself with Steve, so that’s good. Also, I love how they are trying to make this Tamra family photoshoot blasé…you’re trying to tell me this wasn’t planned and Briana’s sons ALWAYS dress in matching outfits? Not buying it.

Down in Miami, Braunwyn and Sean (who by the way, clearly should STOP FOLLOWING BRAUNWYN’S FASHION ADVICE) talk about how this city was made for them. Braunwyn keeps saying that her wild side is going to be explained once the women see her in her element, Miami style. Right.

The ladies, and their luggage, get to Miami. Braunwyn and Sean meet the crew at the airport with convertible Maseratis to really, ya know, get the ladies into the Miami spirit. The ladies are more concerned about their hair getting caught in their lip gloss, so I am guessing they aren’t really appreciating Braunwyn’s grand gesture.

Once at the hotel, the women break off to freshen up. Vicki is greeted by some flowers and champagne from Braunwyn, and Vicki decides that it’s time to start fresh with her. As the night wears on, it’s time for da club. These ensembles are embarrassing. What is Gina wearing and why is everyone donning sequins?! “When you hit over 50 years old, you don’t need to be wearing hair extensions.” Gonna have to agree with you on that one, Kelly. Shannon looks a little overdone, but hey, they ARE at a strip club.

Braunwyn appears to have an 8-count dance that she’s been practicing in the mirror cuz at one point she was getting DOWN. The night wears on and the women are all having a great time. I am curious why Sean felt the need to join the girls on their night out, but I digress.

As the ladies roll back into the hotel, Kelly can’t let the night go by without sending a zinger to Shannon. “You need to cut that hair, too. That looks like sh*t.” Shannon is offended big time (when is she not?) and Kelly is not easing up. Typical behavior.

The next morning, Sean leaves and Braunwyn pops over to check on Shannon. Shannon is so upset over Kelly’s commentary about her hair. Kelly is really separating herself from the gang, and Braunwyn attempts to play peacemaker.

Kelly calls Shannon over and goes right on the defense. She explains that she felt “backed against the wall” and used the Jim Bellino thing to fight back. Tamra tries to get it through Kelly’s head that she was sticking up for Kelly, but Kelly isn’t buying it. She yells back, “People who lie get sued.”

Tamra calls Kelly dirty and storms off, but not before she lets one more nasty comment fly out of her mouth. Over her shoulder, Tamra says, “Go suck some more d*ck for money, Kelly. That’s what you do best.” WAIT. WHAT. Don’t leave us hanging.