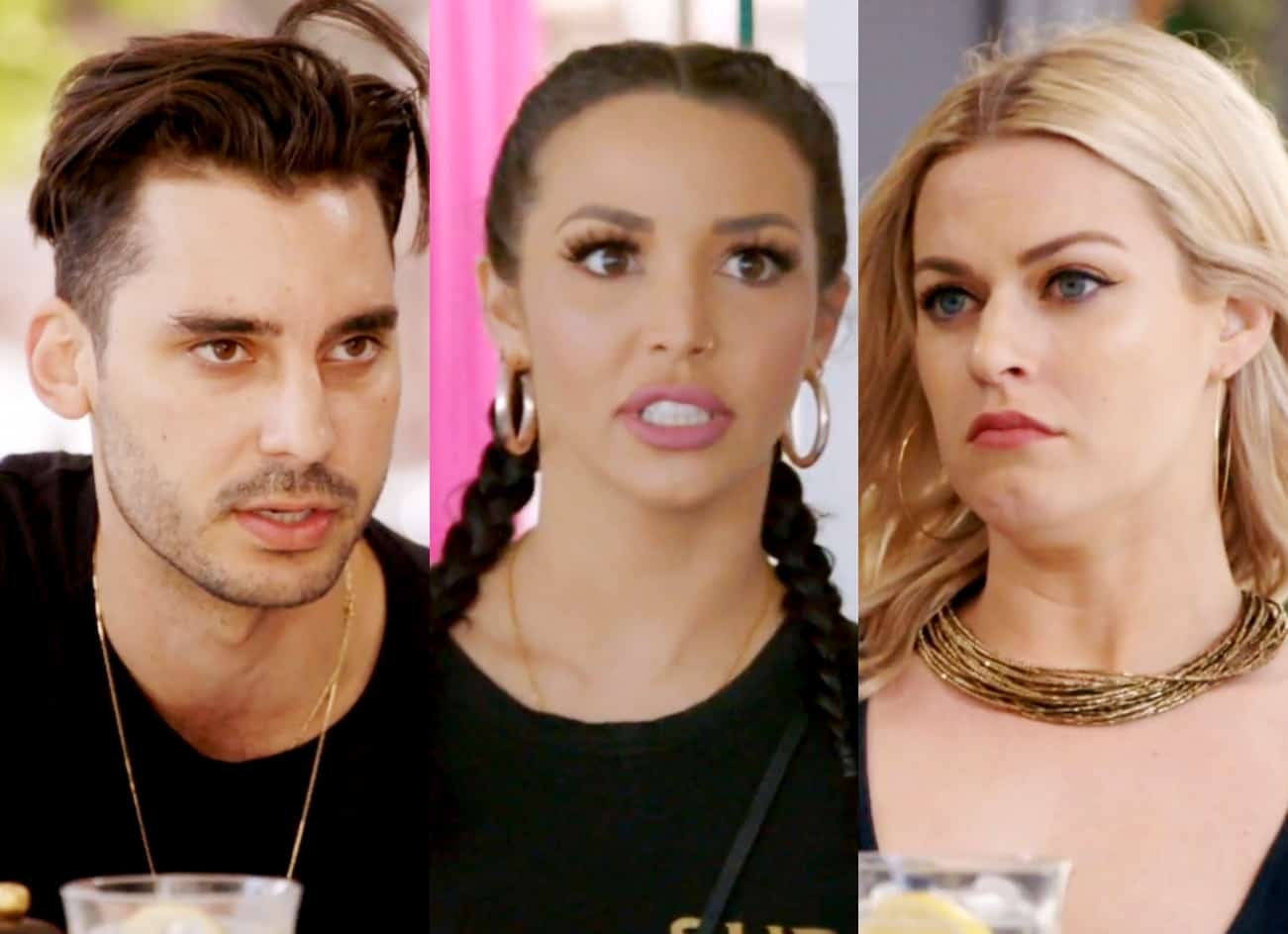 On this episode of Vanderpump Rules, figuring out relationships appears to be a tough road to navigate…

“For Jax‘s wedding present, I am doing a boudoir shoot.” Brittany has called in the troops. Stassi is there for the style and LaLa is there for the sexiness. Naturally. I am dying over LaLa creating “looks” for Brittany. During a lull in the shoot, Stassi talks about her grandmother’s funeral and the girls immediately change the subject to the Kristen/Carter drama. They catch Stassi up and share their disgust.

Brittany is playing the bride-to-be card HARD. She lets the girls know that if Kristen and Carter are no longer together, then Carter is no longer invited to the joint bachelor(ette) party in Miami. I feel like they are so in high school.

As a nice change in subject, LaLa shares that she is going to the studio (obviiiii), but that she has invited James to join. Because of her sobriety, her program “practices forgiveness,” so therefore, LaLa is attempting to smooth things over with James. Ugh.

Wait. Brett is LVP‘s trainer?! I cannot deal with these “servers.” Whilst LVP does a few crunches on the exercise ball, Brett explains that “Scheana and I literally made out for like two seconds in her kitchen” and the girl is acting as though they are married. Why is he sharing this with his boss?!

Let’s discuss Scheana doing the training at SUR. She is stuck with Dayna, Brett, and Charli, the NEW new girl. Scheana is playing the mean girl game as she takes out her frustrations on Dayna. It is very clear that Scheana is giving Dayna the cold shoulder because Dayna is going on a vacay with Max. Max happens to be, according to Scheana, her “leftovers.” Scheana tries to let Dayna know that she can “date him, bang him” cuz she doesn’t care, but I smell BS in this budding love triangle!

Hold up. LaLa’s little brother, Easton, also creates “bangers?” The talent in LaLa’s family runs DEEP. lololol. James comes in, and after listening to LaLa’s newest jam, the two sit down to talk one on one. LaLa tries to save James and it appears as though the guy may be sober-ish at the moment. LaLa reminds James of all the f*cked up sh*t he has done in the past and James admits that he was not nice in the past. The two decide to “squash” any beef and move on.

I can’t keep up with all of these new faces. Now there’s Danica. She is the SUR assistant manager, and she is currently suspended, but she has no problem still hanging with the gang. Ariana, Scheana, and Danica grab a quick bite, talk sh*t about Max, and cackle the whole time. Typical. Ariana shares that she has phased her way out of SUR because she got super busy, but she hopes she can moonlight as a bartender every once in a while. Fingers crossed LVP approves.

Max is a tool. I am unclear why he gets all of these ladies. ALSO. I am unclear why Scheana tells him she is stopping birth control. OMG. TMI. ALSO ALSO. Why is Max telling Dayna this tidbit of information over their date? So odd.

Over at Beau‘s casting office, Stassi brings her guy some lunch and the two discuss Kristen’s dysfunctional relationship. Beau kinda nods along and just agrees with everything Stassi says…

Beau and Stassi aren’t the only ones running their mouths about Kristen’s life choices. LaLa and LVP talk about how “desperate” Kristen is for a good relationship. What’s funny is that Kristen continues complaining about Carter to Katie and Brittany. Brittany lets Kristen know that Carter doesn’t have to go to Miami on the bachelor/bachelorette party if she wants, but you can kinda see that isn’t what Kristen REALLY wants.

The boys of TomTom are ridiculous. Kudos to Sandoval for calling out Max. Evidently, Max told Danica and her friends that he was part owner of TomTom, and you know Sandoval won’t let that slide. Max explains that he would never choose work over women, however, with Dayna, things seem different.

Kyle Chan, the jewelry designer, is practically a celeb. I mean, he is making every one of these Vanderpumpers’ rings, so at the very least he has to be a gazillionaire. Why do Jax and Brittany think talking about Kristen and Carter at the ring store is socially acceptable? Jax wants to make it clear that Carter is no longer invited to Miami. ANDDDD yet again, Jax takes a situation and makes it about him.

Later that evening, Scheana apologizes to Dayna for being the “world’s sh*ttiest trainer.” Basically, Scheana is threatened by Dayna and deep down still jelly that Dayna won Max.

Sidenote: Um, how awkward is the conversation Brett is having with Scheana? Although he goes on and on about how they should be just friends, Scheana listens to none of it.

A year earlier, Ariana essentially called out LVP for making fun of the Toms. Since then, Ariana hasn’t seen or spoken to the queen herself. Ariana has decided that tonight will be the night that she ask LVP for a few shifts at SUR again. She better start praying.

LVP explains that she would be “mystified” if Ariana would begin working for her again and Ariana looks like she may legit barf. Ariana kisses her a*s so hard and hopes for a chance. LVP straight up tells Ariana that she will think about it. The conversation changes to Ariana’s depression and she shares that she has been struggling a lot lately, especially after buying the house. LVP softens upon hearing this.

Ok so let me get this straight. Dayna is not only a server, but she is also a comedian. Look at her go! The crew comes together to support Dayna and Max is there front and center. When Sandoval asks Max if he likes Dayna, he says yes, but he shares his Scheana fears. LaLa breaks it down for Max. “I think Scheana has peed on you. Like she thinks you are her territory.” That is a fabulous way of putting it.

Everyone thinks Dayna is pretty funny (minus me…am I the only one?) and Max seems pleased with his new hook-up buddy’s talents. After all, Max states, “I think I’m pretty funny so it’s kinda cool to find a girl funnier than me.” OMG, Max. Keep tooting your own horn.

Katie and Jax are helping Kristen pack her apartment. Jax states that Kristen has a “co-dependency problem.” Jax is fixated on HIS bachelor party and wants to know once and for all what the deal is with Carter. Kristen is so damn wishy-washy about the break-up/not break-up and we find out that Carter is already making himself comfy at Kristen’s new house. So confusing.

When Carter sashays into Kristen’s apartment, things get tense. Jax sits down and demands to talk to Carter man-to-man. Jax states that he’s involved because Kristen gets everyone involved. He suggests that Carter and Kristen take a month off, but Carter refuses. Carter knows that he can play Kristen like a fiddle and that he can milk her for everything she’s got. Carter thinks that things have been “getting better,” but Jax straight up tells Carter he is no longer invited to Miami. Done.