Months after a physical altercation took place between them, the Real Housewives of Potomac cast members butted heads online after Candiace shared a tweet about karma coming to “incinerate the sh*t” out of someone and proceeded to mention her fight with Monique, as well as Monique’s current “status.”

“I hope I’m front and center when retribution and karma arrive to incinerate the sh*t out of you,” Candiace tweeted on Sunday night. “You can try to come for me all you want. You’ll always be wide with a thumb for a nose…and ugly never wins. Also. Don’t have your brother send my boss the email next time. #heygirl.”

While Monique has blocked Candiace on Twitter, many believed Candiace’s tweet was about Monique and sent a screenshot to her.

“This can’t possibly be about me. I shut her up months ago,” Monique replied after seeing the post. 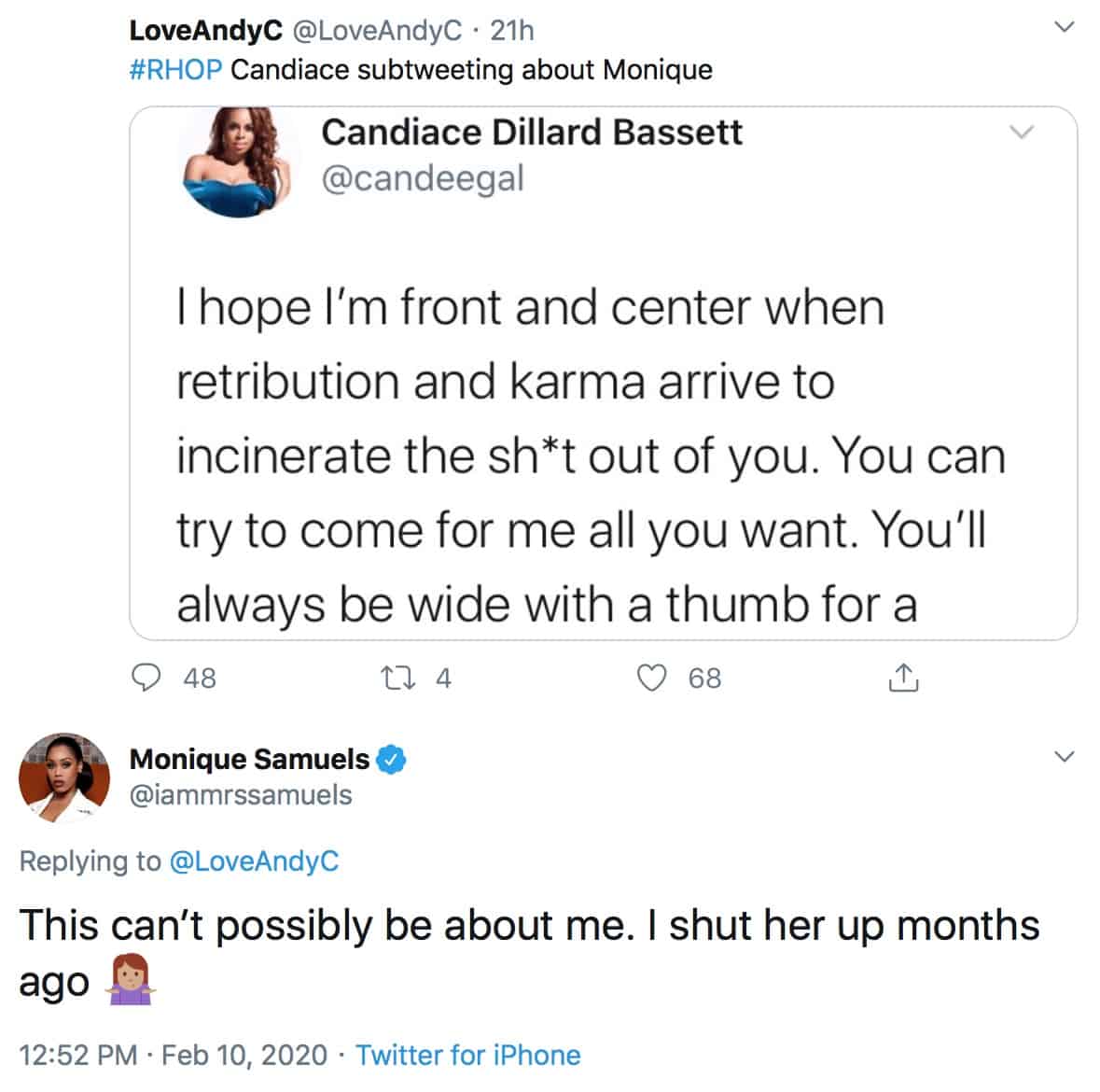 While Candiace eventually confirmed that her initial message was not meant for Monique, the drama between them didn’t end there. Instead, Candiace continued their dispute by mentioning a wine glass, which was believed to have played a role in their encounter last year, and suggesting Monique may not be returning to RHOP in a full-time role.

“1st, I wasn’t talking about u. Your wide bodied peon Cherita has been busy w/my name in her mouth & no balls to say sh*t to my face,” Candiace tweeted. “Now, this IS for u…when did you shut me up? And please be careful, because we all know the truth about this mystery wine glass…& your status.”

“I am happy to give the congregation the whole story. Including what really goes on behind your closed doors if you want to play. Sis,” she added. 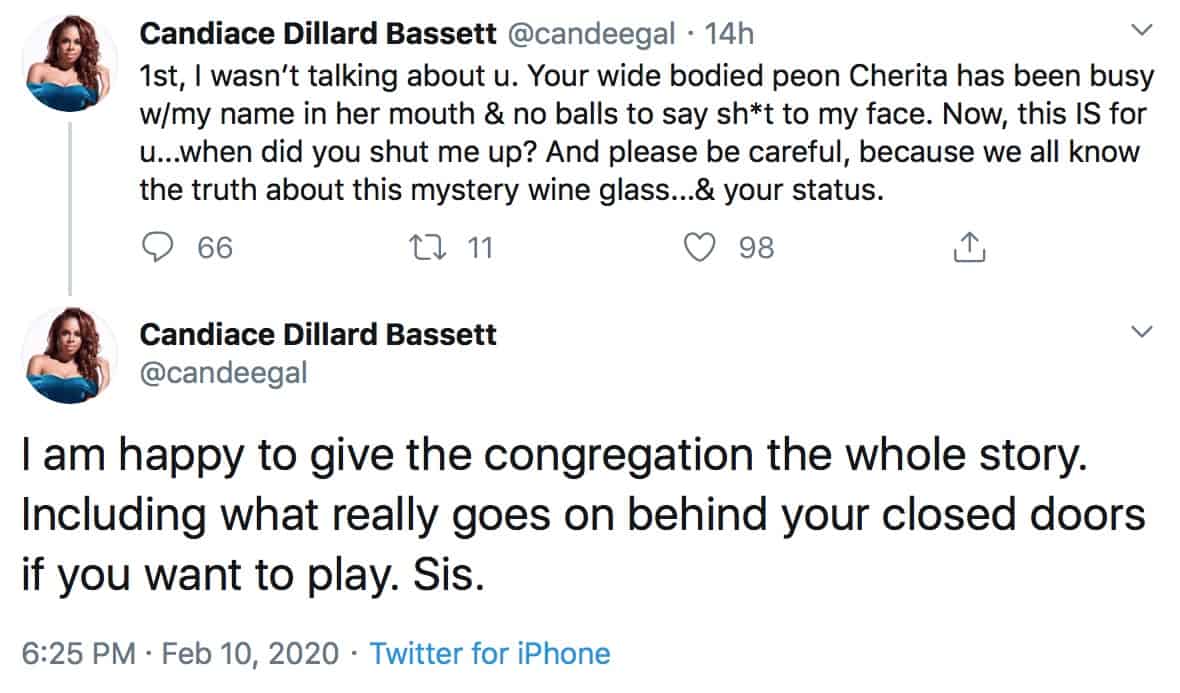 Following Candiace and Monique’s fight, Candiace went to the police and filed second-degree assault charges against her RHOP co-star. Then, just one week later, Monique did the same against Candiace.

While some have hoped to see the two women make amends, Candiace made it clear on Twitter that a reconciliation won’t be happening between her and Monique.

“Well, my tweet isn’t about my co-worker. But while on that subject, understand that I will never be anything with that nonexistent co-worker again,” Candiace stated. “Please stop asking and wait for the season. Hopefully you’ll understand.” 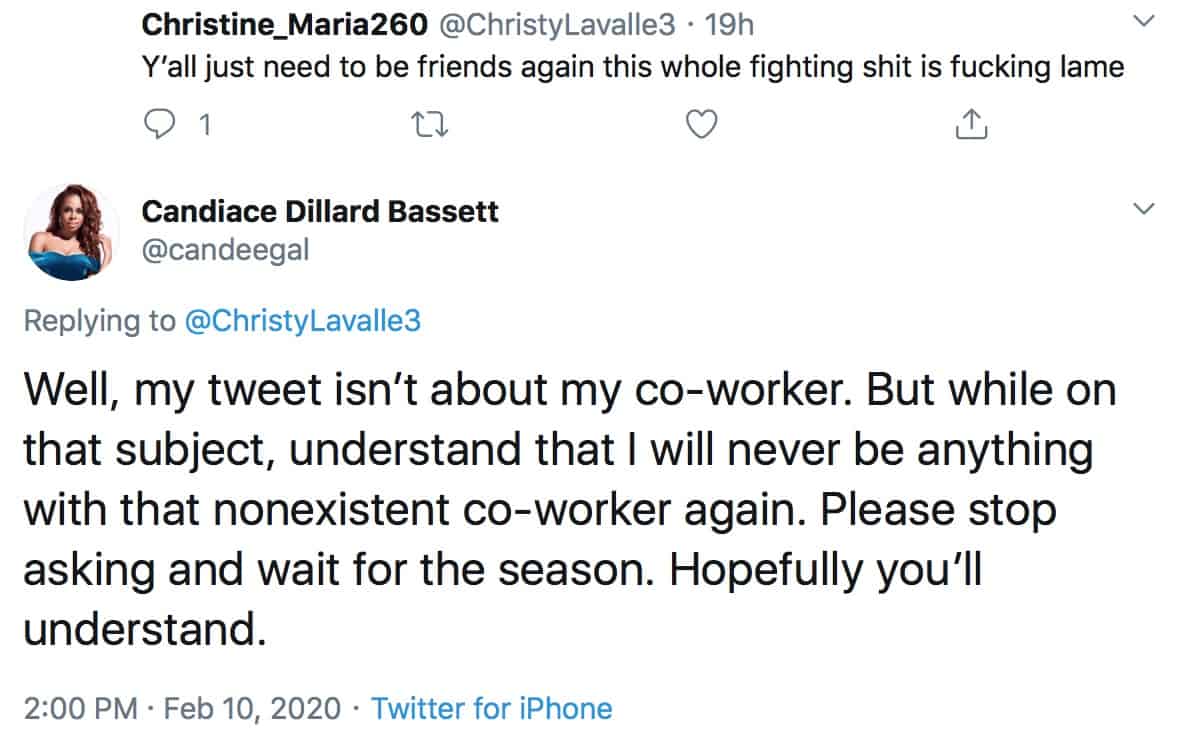 As for when the season will air, Candiace told one fan the premiere was “not soon enough.”

Charges against Candiace and Monique were dropped in December.