RHONJ Reunion Part One Recap: Jennifer Accuses Melissa of Faking Her Baby Storyline as Margaret Tells Jennifer to “Shut It” 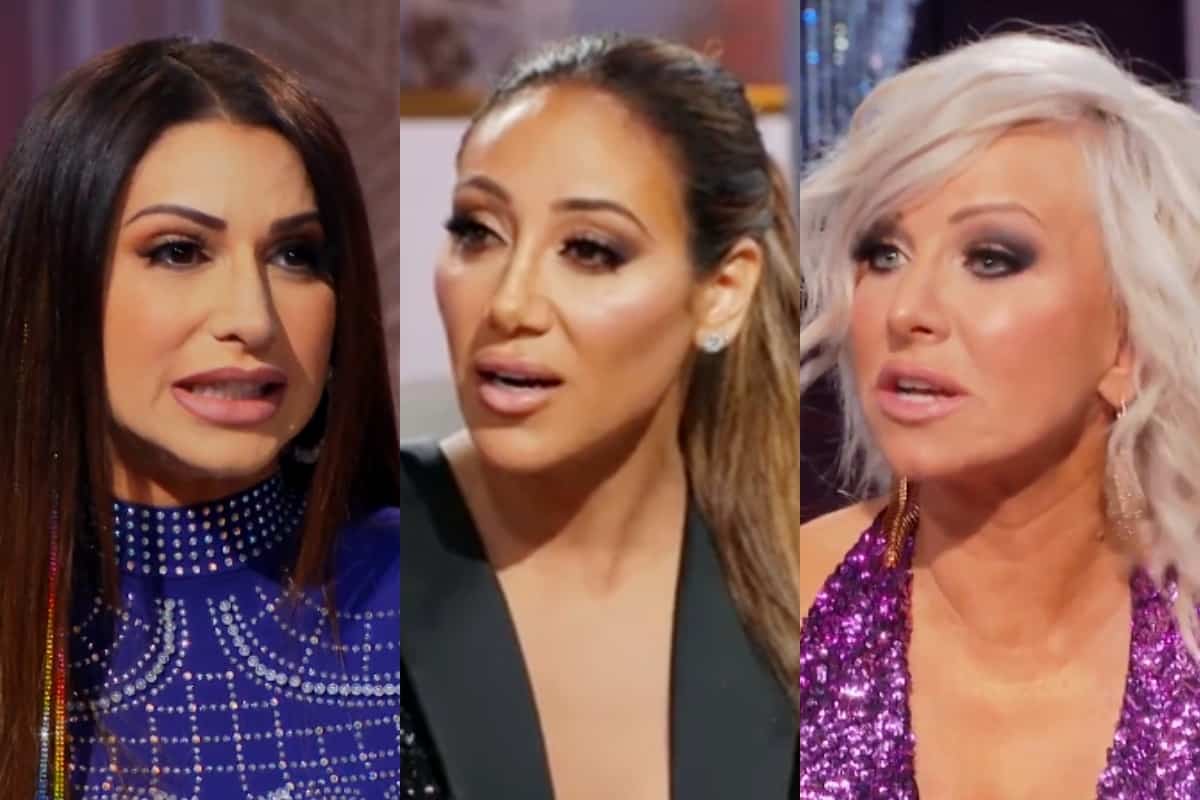 This week on The Real Housewives of New Jersey, we are joining the ladies for part one of the reunion. The reunion starts in the original venue from 10 years ago.  How nostalgic! Danielle was on these couches back in the olden days, but hopefully they have been scotchgarded with all of the self tanner on display!

I must first address the ladies’ outfits since these reunions are almost like a pageant. This is almost too painful to type or admit but I actually like Jennifer’s look the best. The blue dress is very flattering on her and her hair looks pretty straightened. She’s giving me Jacqueline Laurita vibes — maybe because the venue is the same? Okay, Jennifer, IMO has a head start because she has a surgeon for a husband and lots of access to anything she wants #spoiledbrat.

Dolores and Teresa look like they are wearing Gia’s senior prom discards. Teresa needs to lay off the tacky hair jewelry since it brings more attention to her forehead. She might want to consider wearing hats, perhaps? Jackie’s dress is very understated — kind of like her personality — but she is wearing too much tanner. Sorry, Jackie, I still love you! Melissa in her   jumpsuit looks okay, but the plunging neckline is too much. Margaret is all boobs out in her purple sequined Studio 54 dress. I think there must be some sort of competition on who shows the most skin or cleavage at these reunions.

Andy always has to inquire about plastic surgery, and this time it is directed at Jennifer. She owns up to a breast lift/reduction, tummy tuck, and liposuction. She definitely is taking advantage of being a plastic surgeon’s wife. Dolores shares she hasn’t moved into David’s house but he is living in her house with Frank? They have a Three’s Company situation going on. It annoys me because we had to painfully watch Dolores ALL season act excited about moving in with David. We ALL saw the writing on David’s wall that said that was never going to happen. She obviously was the last to know #missedallthesigns.

After the storyline is mentioned about more babies for the Gorga family, Jennifer tells Melissa she is too self-absorbed to have another baby and accuses her of simply faking the baby storyline. The gauntlet has been thrown down already. Jennifer tells Melissa that she is making a mockery of the process couples go through to truly conceive. I get it, and that is actually a valid point. I don’t believe they were ever truly going to try to have another baby.

I have to agree with Jennifer on Melissa being an attention wh-re. But it loses its credibility coming from Jennifer. When Jennifer gives examples of Melissa, she talks about the constant selfies and what she says about her own pictures. Melissa asks for examples of being self-absorbed and Jennifer claims it came from someone else. Hmm, who could that possibly be? Jennifer won’t say who shared this with her, but interestingly, the camera pans to Teresa #guilty.

Melissa gets called on the carpet over her fake storylines by the viewers. The baby, restaurant, and sister storylines are brought up. She justifies herself very defensively. She is probably thinking, what else can I do next season to stay relevant! Solve world hunger?

Andy starts in on Margaret and her lawsuit over a logo she supposedly stole. The viewers are questioning if Joe works. She insists he does but doesn’t even have to leave the house and owns real estate. I would like that kind of job!

We then see a package of Marge Sr.  Margaret was exposed to her mom’s crazy partying ways at a very young age. She doesn’t drink because she was exposed to her mother’s drinking issues. It has turned her off to it. She has never had a relationship with her dad. I think her upbringing definitely defines who she is now.

Jackie has no regrets over her second season. She shouldn’t since she was at her most vulnerable and I respect her honesty. It is very refreshing on this show! Teresa shares that the girls spent Christmas with Joe in Italy. It is good to hear the kids are having a relationship with their dad.

The dynamic between Dolores and Frank is discussed. She says they haven’t had sex since Frankie Jr. was conceived. Dolores claims it is never going to happen again. I can’t blame her on that one — who knows who he has messed around with? We are then subjected to a video package of cringeworthy moments between David and Dolores. Dolores claims she is good and doesn’t want a relationship. Dolores tells Andy, “I am a good catch,” and that David should be knocking her door down. I promise you, Dolores, he is never going to come a knocking. I am glad you are moving on and heading to NYC!

Margaret tries to stop Jennifer from interrupting Dolores while she is talking. Jennifer and Margaret then get into it, telling each other to “shut it,” which is pretty childish. Keep it moving, ladies.

Andy then mentions the relationship between Jackie and Dolores. Dolores is very clearly jealous of everything Jackie has and is. She claims their differences are from their different upbringing. Nope! It is the green eyed monster that comes out of Dolores when they interact. Some of the viewers thought Dolores was anti-Semitic. That is a stretch. I don’t think that is the reason at all. It is pure jealousy.

Jennifer has to make faces to bring the attention to herself while Jackie and Dolores are talking. It is almost like a producer is using a cattle prod on her to keep interjecting while the others are talking. Maybe the grimaces are from that???

Andy then gets into the very sensitive topic about parenting. This topic can bring the claws out for any mother. Teresa says she wasn’t allowed to go away to college since her dad was strict? I suspect it had more to do with the fact that she wasn’t accepted anywhere. There is no way with her grammar skills alone that she would score well on a SAT exam.

Jennifer and Margaret go at it over who is the better parent. Margaret questions Jennifer on the support she receives in raising her kids. Jennifer claims she only has one nanny and a housekeeper #lie. Margaret claims Jennifer is out and about all the time on her social media. Jennifer thinks Margaret is insta-stalking her? She basically admits her Instagram is Insta-sham, which is pretty telling #fakelife.

Jackie is now in the spotlight discussing her eating disorder. Production shows the painful clip with her dad saying it was worth it because you look great now. It definitely showed he lacked the sensitivity gene. Jackie’s wedding photo shows how emaciated she was. It is heartbreaking to see the condition she was in. Jackie shares that people questioned how Evan could stand by and allow that to happen. She says that she was strong willed and at that point she wouldn’t have listened since she was very sick.

Why did we have to see Jennifer do an impersonation of Siggy?  It was obnoxious when Siggy laid on the floor back then but to have it replayed was painful. We then get into the storyline about her brother Steven being gay and her daughter Gabby being bullied. Steven is building a relationship with his mom again and introducing her to his group of friends. Gabby is no longer friends with the mean girls from her class  Things are looking up for both of them. Margaret actually throws Jennifer a bone, telling her she handled that situation with her mom like a champ.

Since Jennifer thinks she is a comedian, she got shaded by Bethenny. We then see a clip from WWHL with Jennifer calling Bethenny a crypt keeper. Jennifer is definitely out of her league fighting with that wordsmith who has a razor-sharp tongue. She will need serious protective gear to engage with Bethenny. Quit while you are ahead, Jen.

The Jersey Shore situation is rehashed over Jennifer’s trashy behavior. I’m sorry, the look on Jennifer’s face in that scene when Melissa said “Jackie is winning”  is priceless. I could watch it on repeat since it is so funny to see Jennifer’s reaction. Melissa and Jennifer still haven’t spoken since the shore trip. Margaret trashes Jennifer’s delivery. Truth. Jennifer keeps defending her nasty behavior. She deflects that Margaret does the same stuff. Melissa tells Jennifer she is just an a**hole. AGREED. They will have to agree to disagree for now.

Next week on part two of the reunion, the men join the fray, and we may actually get to see the real crypt keeper, Danielle! The Teresa and Joe storyline is also covered. See you then for some more Jersey antics!