Vanderpump Rules Recap: Raquel Tells Lala to “Shut the F**k Up” After She Brings Up Logan Rumors and Accuses James of Drinking 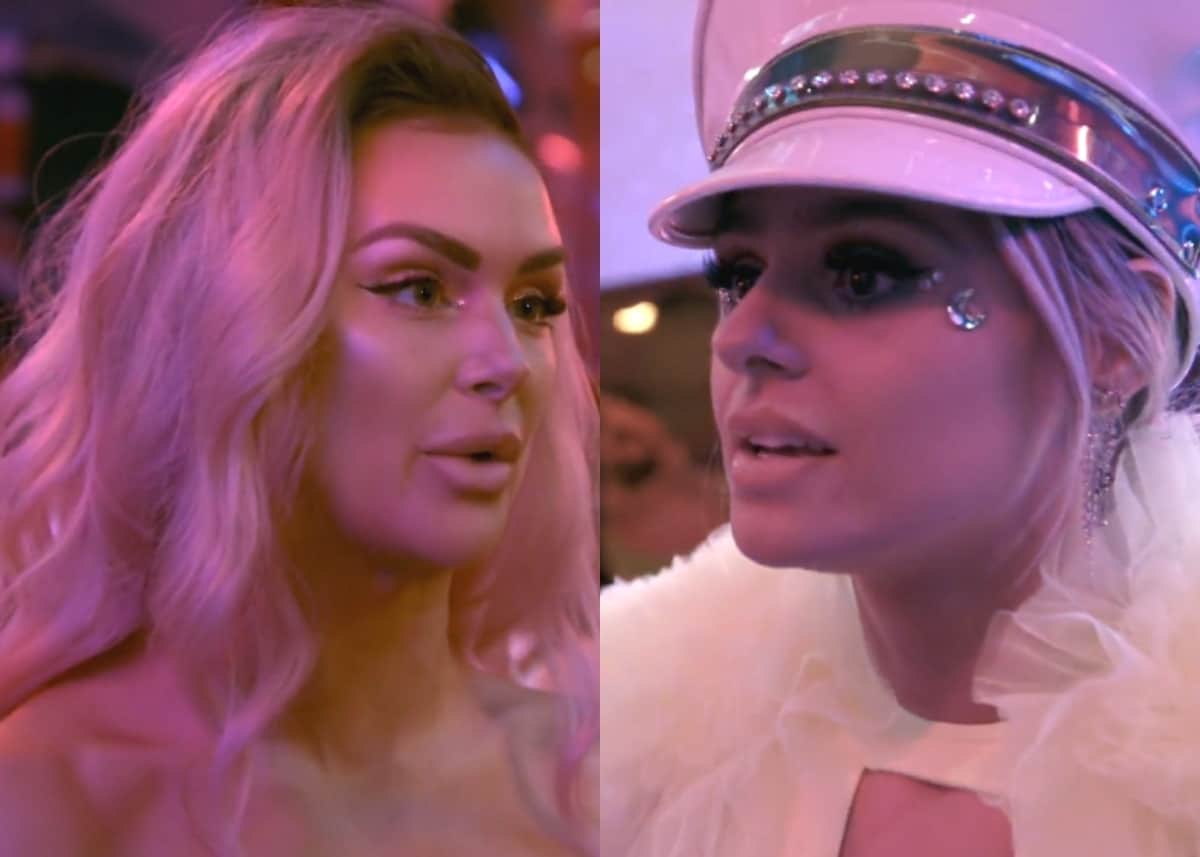 The wedding is finally over, so it’s back to “reality” for the gang on Vanderpump Rules.

Upon his return home from Kentucky, Schwartzie is still mourning the loss of his lizard, Daug. He lets Max know that he is planning on having a memorial pool party for Daug. Max is excited to score some more screen time, but not as excited as he is to tell Schwartzie the latest drama with Dayna. Max is also beyond annoyed with Danica. He is p*ssed that she spread rumors about him to Dayna (eye roll) and states that he wants to 86 her from TomTom. Schwartzie, the guy with no back-bone, promises to stand behind Max if that is how he feels.

In other news, Raquel is planning on meeting up with LaLa. LaLa has reached out to Raquel regarding James‘ behavior and drinking. So, pretty much hell is freezing over.

Why are Jax and Brittany opening dish towels as a wedding gift? You’re trying to tell me that throughout all that wedding pre-celebration, Brittany’s bridal shower did not provide her with DISH TOWELS?! Jax claims “my wallet’s happy it’s over,” and if Brittany shrieks “husband and wife” one more time, I swear…

It’s time for the pool party in remembrance of Schwartzie’s lizard. He is dead serious about mourning Daug and Sandoval lets him cry in his embrace. Schwartz gives a eulogy for Daug where he highlights his week with him. Yes. That’s right. Poor Schwartz only had Daug for a week.

Jax and Brittany are noticeably missing from the party, but they have a good excuse. They are paying a visit to LVP‘s house to get their wedding gift. Brittany talks about how she wants to start a family with Jax soon and that now they don’t have to do “the spray and pray.” OMG. LVP gifts them a Tiffany’s tea set, which you better believe ain’t gonna get any use in THEIR house.

Back at the pool party, Danica finds Max and wants to find out what his problem is. Danica is irked that Max talks sh*t about her and is beyond aggravated to hear that she is 86ed from her sister restaurant, TomTom. After the falling out, the two Toms discuss Danica’s energy after watching her lay into Max. They want to know why she was yelling at their boy, Max, but once Max lets Sandoval know what went down, Sandoval becomes annoyed. Max has to learn to separate business and personal issues…

OMG Scheana‘s orange hoops. How can we even take her seriously? Scheana sits down with Stassi and Katie and wants to know how they’re feeling about their friendship with Kristen lately. Scheana explains that she will be seeing Kristen later and essentially lets the girls know exactly how Kristen has been feeling. Stassi and Katie make it clear that they give zero f*cks if Scheana repeats anything the girls have said during their conversation. And you KNOW Scheana is gonna be running to Kristen letting her know what they said…

Later, Dayna and Max chat. Again. Dayna tries to reason with Max and lets him know that they can work through the drama with Danica. But…Max doesn’t wanna be tied down in the end, and therefore, they will remain uncoupled.

“Your Most Extra Self.” That would be the theme of Sandoval’s upcoming birthday party. I am not even sure I know what that means, but I am def looking forward to the ensembles.

LaLa is busy at Vanderpump Dogs, and while she talks with LVP, James and Raquel make a “surprise” visit with their pup. LaLa reminds Raquel of their upcoming girl-talk session, and LVP, not to be outdone, offers to knock some sense into James…for the umpteenth time.

I’m glad to see Raquel put her face on for this meeting with LaLa. Both girls are done up to the nines, and after they make small talk, Raquel reminds LaLa that she didn’t appreciate LaLa calling her an idiot in the past. Raquel is proud of herself for standing up to the “bully,” but once LaLa makes it clear she doesn’t actually think Raquel is a moron, the convo continues easily.

In the meantime, James pays a visit to LVP’s. It gets awkward fast, considering LVP doesn’t waste a minute before she berates James. She lets him know that the way he treats Raquel is awful and that James needs to get help. James shares that he went to an AA meeting just yesterday…curious timing. James flashes his chip to LVP, and then he cries like he always does. LVP promises to help James and essentially becomes his sponsor.

The next day, Kristen comes over to Jax and Brittany’s house to prepare for Sandoval’s EXTRA birthday party. Kristen b*tches about how she hasn’t talked to the Witches of Weho about the wine or about the drama. Jax attempts to give Kristen advice and lets her know that people grow apart and that’s okay. Wow. Who knew Jax would be the wise old man one day?

Um, how much of butt kissers are Max and Brett dressing up like Sandoval’s previous costumes for Sandoval’s birthday party? I can’t with them…or with Scheana’s costume. These people are far too old to be engaging in this type of behavior.

LOL to Sandoval pushing his dad out of the way once he gets into the birthday party. He needed him to guide him down the street because Sandoval is wearing STILTS, but when it comes to the grand entrance, bye, Dad.

It can’t be a party without some drama. After what we thought was a reconciliation between LaLa and Raquel, everything changes in a heartbeat. LaLa lets Raquel know that Logan, her BFF, claims he saw James getting f*cked up six days earlier. Yes, this is the same Logan. You remember the rumors about Logan and James from seasons’ past?

Things only get worse as LaLa, for reasons unknown, insists to Raquel that Logan’s claim that he hooked up with James is the truth because according to her, she spent a lot of time with both guys and would sometimes hear them make bets that involved someone getting a ‘bl*w job.’ Say what now?! This enrages Raquel, and in unusual fashion, she tells LaLa to “shut the f**k up.”

LaLa doesn’t take well to Raquel’s language, but in unusual LaLa fashion, she doesn’t lose her s**t as she calmly tells Raquel not to talk to her that way. Anyhow, Raquel is furious and stands by her man. Cuz that’s what she always does. LaLa cannot wrap her mind around how Raquel can be that loyal to James.

Katie and Kristen discuss a potential girls’ night and plan on leaving Kristen off of the guest list. Wouldn’t ya know? On cue, Kristen meanders over and interrupts their conversation. When Kristen talks about the wine, Stassi lets Kristen know that once the contract is up, she is out. Stassi blows up and says that their friendship has been weird for a year. Katie is livid that Kristen called her unhappy, and she calls Kristen miserable. It’s a whole lot of back and forth, and eventually, Stassi lays it all out. She states, “We are not sisters. We have not been sisters for a while.” Ouch. With that, Kristen storms out of the party.