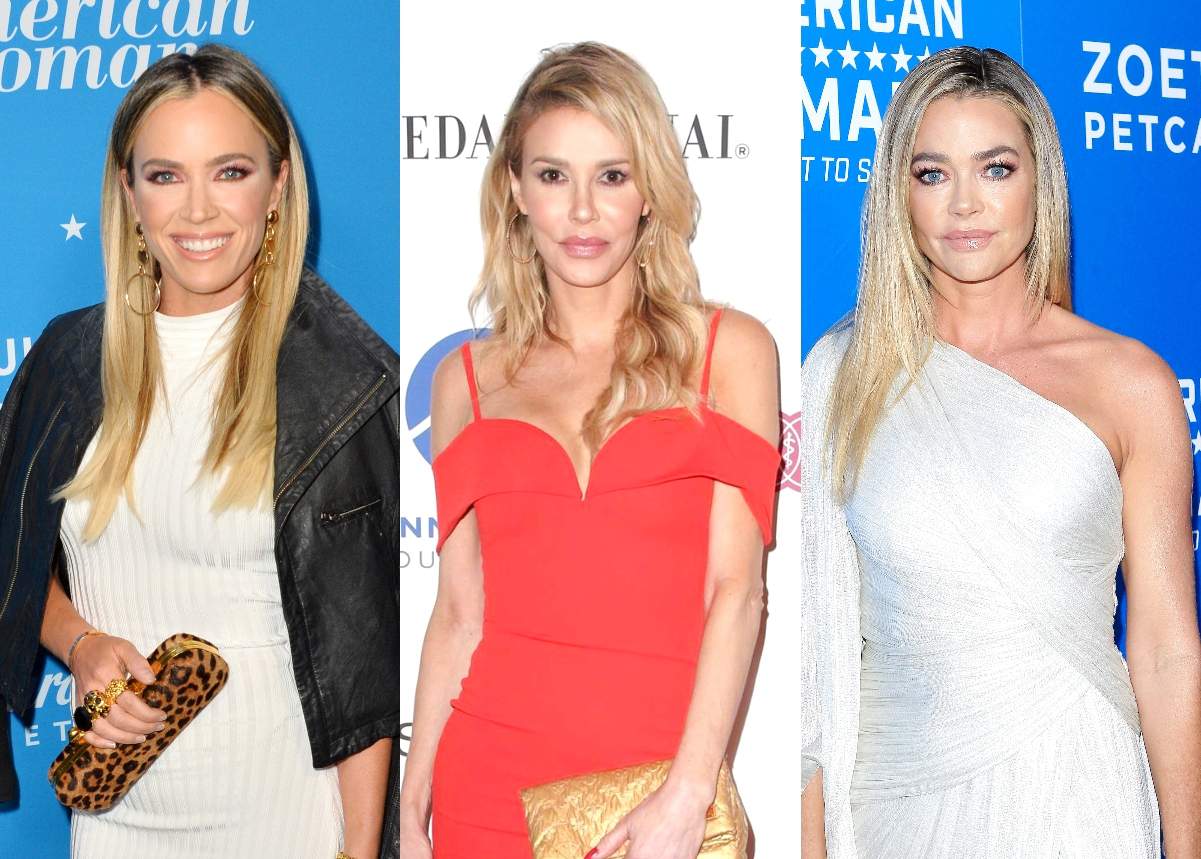 Teddi Mellencamp called out Denise Richards on Twitter last night for her poor treatment of their waiter on Wednesday’s season 10 premiere of The Real Housewives of Beverly Hills as Brandi Glanville slammed her as a “complete b***h.”

Following a scene in which Denise was seen speaking condescendingly and laughing after her waiter presented her with the wrong tequila, Teddi shared her thoughts about the awkward moment as Brandi weighed in and Denise admitted to feeling “awful.”

“They always show us ordering every time we eat out. How we treat a server is always something I watch out for,” Teddi wrote on April 15.

“I’m sorry but their is a way to say to your waiter (I’ve waited a lot of tables) that you think your drink might be wrong without being a complete b***h!!!” said Brandi. “I judge people by the way they treat others.”

Then, after one of her followers said Denise was “so snobby,” Brandi agreed before saying that “hate” should not be given to anyone.

“Agree,” she replied. “I’m getting off twitter for the eve because Im already angry Im not able to be with my little man as he turned 13 today so I will leave with a positive thought- We are watching this show for entertainment. These women are giving us that. Lets not hate on ANYONE.” 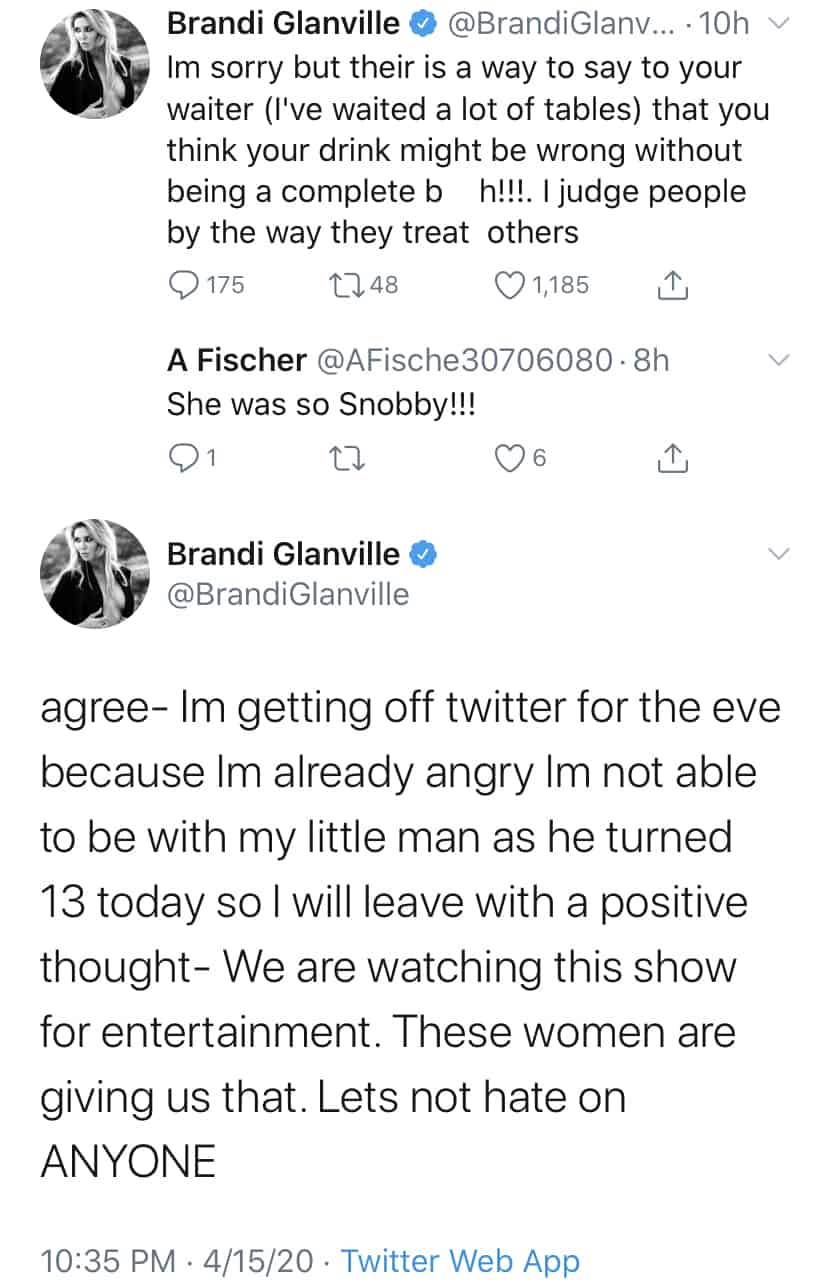 During Wednesday night’s show, Denise snapped at her waiter during a cast meal with her RHOBH co-stars, telling him he did not give her the right drink and saying, “Thank you!”

Amid the episode, Denise attempted to defend herself to her fans and followers while also revealing that she apologized to the man in the scene.

“I was all fired up before my tequila was delivered. I felt terrible and apologized to the waiter. But I do know my tequila,” Denise tweeted, along with an emoji of a glass and another of a laughing while crying face.

“I hope you did apologize because I was mortified watching that scene. Definitely never expected that from you,” a fan replied.

“I agree… unfortunately they can’t air everything. I felt awful,” Denise confirmed. 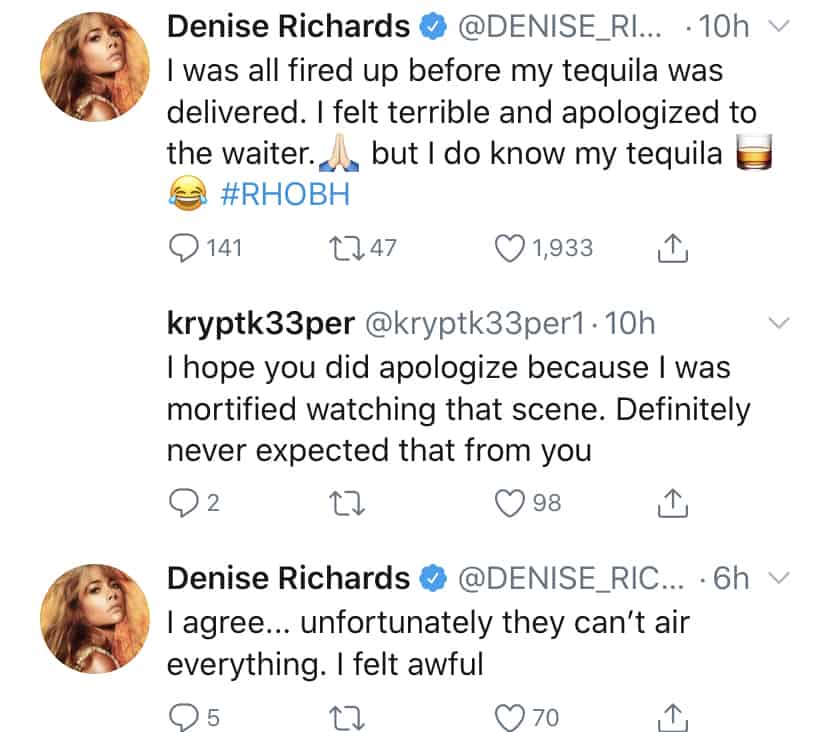