The RHOBH Premiere Recap: Denise’s Decision to Stop Filming With Cast is Previewed as Lisa Rinna Dons LVP’s Crown Plus We Meet Garcelle! 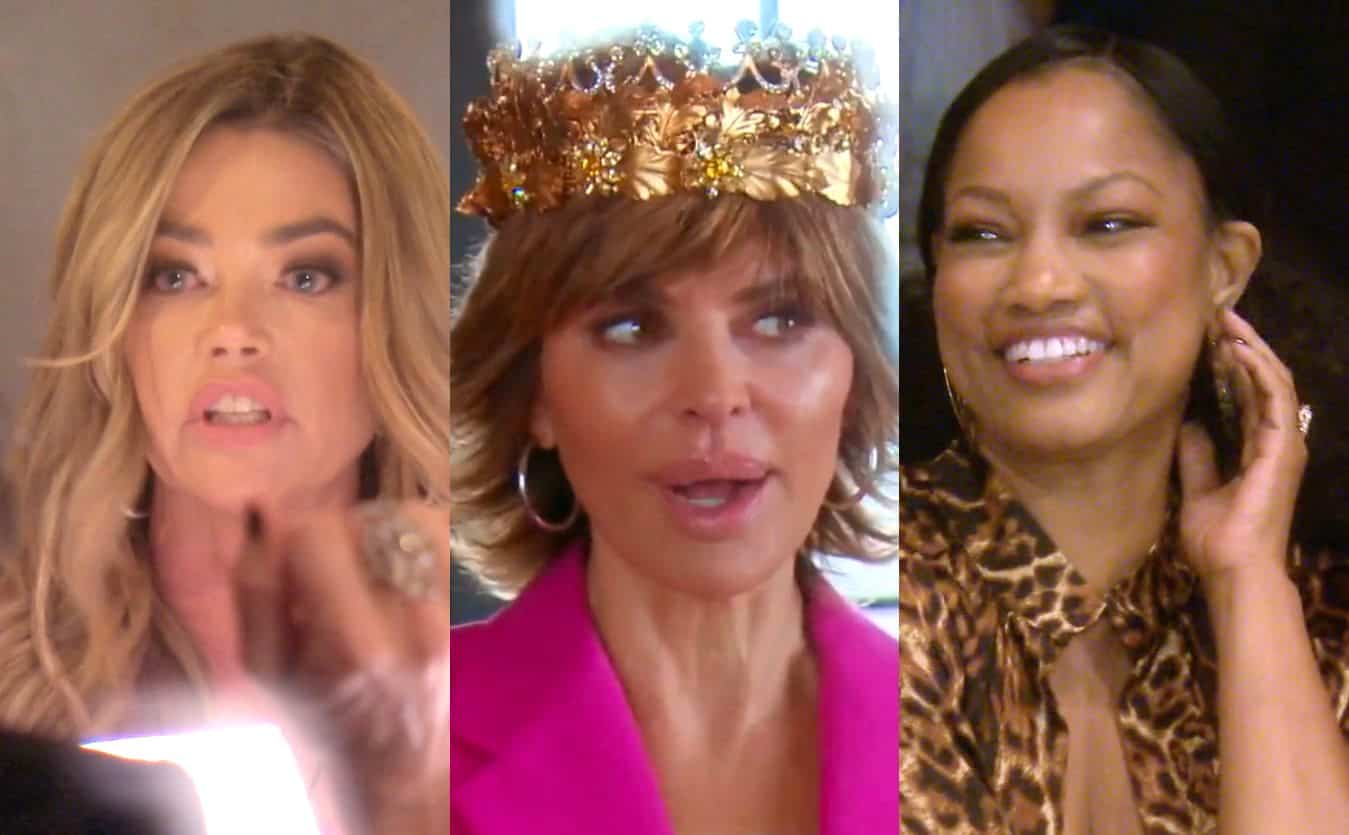 With one of the most loved faces gone from the cast this season, the newbies better bring it on for the premiere of the Real Housewives of Beverly Hills.

This season, we have some bangs on Kyle and some new faces. Kyle is the same old extra biatch and it warms my heart to see that some things never change. For a sec, I thought I tuned into the wrong show. The housewives are off to New York before we even have a chance to process this is as a Beverly Hills franchise, but that’s because it’s NYC Fashion Week.

In Kyle’s words, it’s a once a year pilgrimage for the ladies AND Kyle’s clothing line is going to be debuted. Convenient. I don’t know who Kyle paid to be able to get a slot during fashion week, but I can tell ya that I am looking forward to watching the ladies work it down the runway.

The gang arrives at the airport bright and early at 5:30 a.m. Denise reminds us that she used to be a model when she was younger but isn’t as amped as everyone else about the big trip. Shocking. Kyle snags a massive corner suite with her daughter in tow, and I just wanna know why Mauricio, her hubby, is missing out on this big moment in Kyle’s fashion career.

Thank GOD Erika Jayne is still performing. LOL. She is singing at some D-list fashion show, but it is the Barclays Center, which is a pretty BFD. The ladies trickle in and get settled into the city. Kyle phones her pal, Dorit, for fashion show advice because ya know, Dorit has done this “so many times.” Andddd don’t worry, you guys. Dorit still has her fake accent.

Hold up, wait a minute. Erika was a go-go dancer in Jersey?! This is incredible…although not very shocking. It’s a field trip for Teddi, Rinna, and Denise because Erika is swooping in and taking these ladies out of the city and back to her old stomping ground bar in NJ.

Meanwhile, Dorit explains to Kyle that her Beverly Beach lawsuit is finally over as she and Kyle chow down on street dogs and pretzels. They arrive at Kyle’s New York headquarters where Dorit attempts to “save Kyle’s fashion show.” Dorit is astounded that Kyle has a line and has not even seen some of the pieces. It is very clear that Kyle has no idea what the hell she is doing. It is also very clear that Kyle is making fast enemies with the fashion show producer. Yikes.

I am cracking up as these ladies roll up to Shakers, the go-go bar where Erika used to work her magic. Denise is p*ssed that these dancers at the bar aren’t stripping down. But alas, ya can’t always get what you want.

Enter one of the new faces: Garcelle. She is a force. She was a model and actress and she is ready to take on the housewives. Turns out that Denise and Garcelle are homies — they did a pilot a while back and have stayed in touch ever since. Garcelle is a single mother to twin 11-year-old boys and tells her tale of growing up to Denise and Teddi. Garcelle explains that she was born in Haiti, but now she is living the American Dream. She also thanks Sesame Street for teaching her English. Now THAT’S awesome.

While in New York, Rinna gets a chance to catch up with her girlfriend, Sutton, who buys couture. That’s all I got out of Rinna’s segment. I love how Bravo tries to casually introduce the new girl to the group. Like, here yea, this is my friend. We just met an hour ago, but please, meet the rest of the gang! Apparently, Rinna only likes her because she is “rich, honey,” and the duo shop around in Domenico Dolce’s apartment. Yes, the Dolce from Dolce and Gabbana. $$$$$. Rinna just goes on and on about the amount of money Sutton has and straight lies to her face about Sutton’s ugly couture look that she models. What is this life and where did Sutton come from?!

And at some point during the shopping trip, Rinna spots a crown and doesn’t hesitate to throw a lil shade LVP‘s way as she tries on the crown and laments on how it isn’t all that heavy! A play on words as it shades LVP’s now-infamous tagline in which she states: “The crown is heavy darling, so just leave it where it belongs.” #ShotsFired!

Over some drinks, Teddi lets Denise know that her ex, Charlie Sheen, has filed documents that he no longer wants to pay child support. Garcelle reminds Denise that she is a good mother and Erika suggests she hire a lawyer — and with that, Erika calls her husband, Tom, the lawyer. Denise gets all flabbergasted and does her best to dodge Erika’s nagging about lawyering up. It seems to me like Denise doesn’t take much seriously.

Is it me or is Kyle acting like the Queen Bee so far this season? She hosts a dinner the night before her fashion line debut and all the women come clad in sequins. What’s up with that?

Ohhhh, so now I know why Kyle has those god-awful bangs. She is reprising her “Halloween” role and that was her hairstyle way back when the original was filmed. Kyle has to go right from NYC to film the movie and is missing her husband. When she attempts to phone him, did you catch her saying, “He’s probably drunk and stoned?” OMG. Is Kyle’s husband a 20-year-old frat guy or a big businessman?

Sutton arrives at Kyle’s party, and you can tell that Kyle is eyeing Sutton up and down. Suddenly, the sequins were a bad idea, huh, Kyle? Sutton is also judgey AF. She makes a comment about everyone’s outfit, and coming from a lady who was just wearing the most ridiculous sheer pink blouse, I am not listening to her commentary.

As Kyle makes her speech about her gratitude for the opportunity she is getting at fashion week, she opens the floor up to Teddi, who makes a bombshell announcement: she is pregnant! While everyone applauds and congratulates the mom-to-be, Sutton thanks her lucky stars she isn’t with child. You see, Sutton is a “Southern mom” and Erika commiserates with her. Suddenly, Erika has her Southern drawl come out and remembers she grew up in Georgia as she talks with Sutton. Interesting.

With Kyle’s fashion show only a few hours away, the drama just keeps on coming. The fashion show producer, who Kyle p*ssed off the other day, doesn’t wanna be around Kyle. Which should be interesting…Kyle is afraid people may think she is a joke, but I kinda can’t help but think that because her line looks like something my grandma would wear around the house. It’s all just VERY busy. I am also shocked that Kyle is allowing Teddi to walk in this show. We all know how Teddi looms as she walks.

Kyle is using her nieces Paris and Nikki to help sell her line, and although that’s somewhat pathetic, it’s also smart. Also, where is Mauricio? Kyle is running around like a hot mess express. I am holding my breath as these models stomp down the runway. Somehow Teddi manages to head down without looking like she just got off a horse and Rinna is totally channeling her model-daughters as she “flaunts it.” Listen, if you’re important to Kyle, you’re in the show. It is clear that Garcelle and Sutton haven’t gotten into her circle just yet, as they are the only audience housewives.

Everything went pretty well considering and then Kyle leaves us with an ominous statement for the rest of the season. Things turn bad. I mean, really bad. In December, Denise stopped filming with the group. The women explain that when you sign up for the show, everything comes out. Apparently, Denise has a secret. And this is gonna make for an interesting season BECAUSE it is rumored that Denise had been having a passionate love affair with Brandi Glanville!! This news ALMOST makes it okay that LVP isn’t on this season. Almost…sigh…