Home Real Housewives of Beverly Hills News Denise Richards Accused of Having Affair With Brandi Glanville for Months by RHOBH Costars, Denise Denies it Plus Find Out Why Brandi is Upset as Camille Reacts

Denise Richards Accused of Having Affair With Brandi Glanville for Months by RHOBH Costars, Denise Denies it Plus Find Out Why Brandi is Upset as Camille Reacts 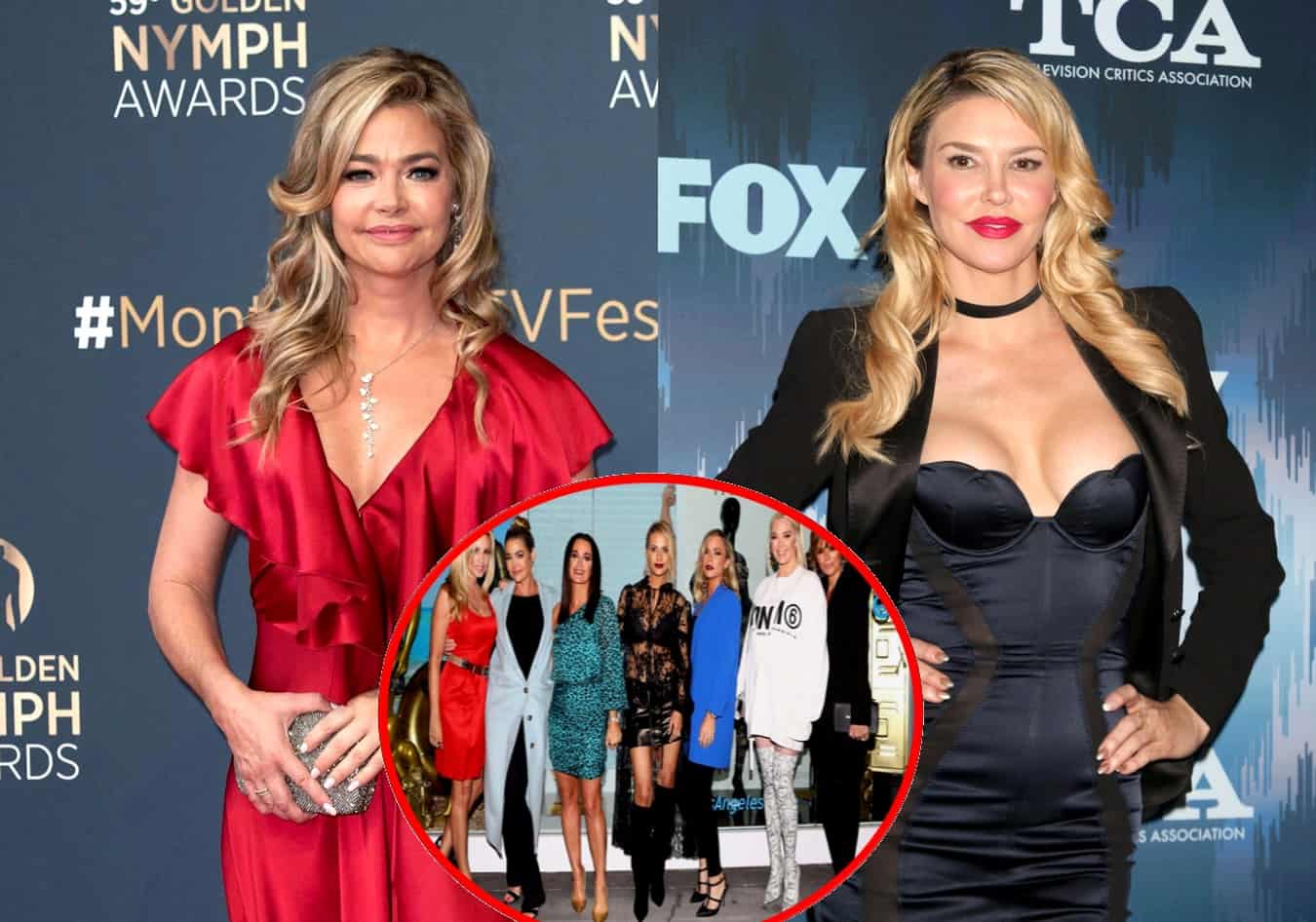 A new report is revealing Denise Richards quit filming The Real Housewives of Beverly Hills this season after her co-stars confronted her about an alleged months-long affair with Brandi Glanville, which was believed to have begun in early 2019. More details below as Denise’s rep is now issuing a denial about the affair allegation.

Following a report claiming Brandi and Denise hooked up behind the back of Denise’s husband Aaron Phypers after she insisted to Brandi that they had an open marriage, another report has revealed that Denise allegedly walked away from her role on RHOBH after being confronted during a cast trip to Rome in late November.

“[Denise] has basically walked away from the show,” an insider revealed to the Daily Mail on January 8.

According to the report, Denise’s dramatic encounter with her co-stars during her cast trip to Rome, which she didn’t initially want to be a part of, came after they supposedly confronted her about “nasty things” they’d been saying about them.

“Denise attempted to brush it off and act innocent, but then the women dropped a bombshell. They then confronted Denise about her affair with Brandi,” the source shared, adding, “This was all done on camera.”

Over the past several weeks, Brandi has made her feud with Denise quite evident by saying on Twitter that she’s been “Denised” and seemingly calling out her former friend for attempting to blackmail her and slut-shame her. However, according to the report, Brandi is quite upset about the end of their friendship and can’t believe that Denise would lie to her about her supposedly open marriage to Aaron.

Denise’s husband, who she married in September 2018 as cameras rolled for RHOBH season nine,  is said to be upset as well.

“This has hurt Denise’s husband Aaron very much,” the insider continued.  “He is a good guy and Denise is crazy for thinking she could have an affair while filming a reality show and get away with it.”

A third source went on to reveal that “everyone in Beverly Hills knows about” Denise and Brandi’s alleged affair because news of their relationship was shared at a Christmas party thrown by Kathy Hilton in December. As the source explained, the RHOBH cast attended Kathy’s bash after filming the finale party for season 10 at the home of Dorit Kemsley.

“Denise was a no show at either and that’s when all of Beverly Hills found out. It’s extraordinary that it’s been kept a secret for this long,” the insider stated.

“These are all key moments on the show that contractually she should be filming. Bravo should just step in and fire her as she’s not turning up for her job,” said a production source.

In response to the story, a rep for Denise told the Daily Mail their report “isn’t true” as cast member Camille Grammer shot down the rumor on Twitter and accused Brandi of making up the story in an effort to reclaim her full-time role on RHOBH.

“It’s not true. Someone is desperate for a diamond,” Camille stated on Twitter.

Then, in a second tweet, Camille responded to a fan who asked if the report would be discussed on the upcoming season of RHOBH.

“It may come up…. a desperate person looking to start drama to get back in the show full time. Some people will lie about anything SMH,” she tweeted. 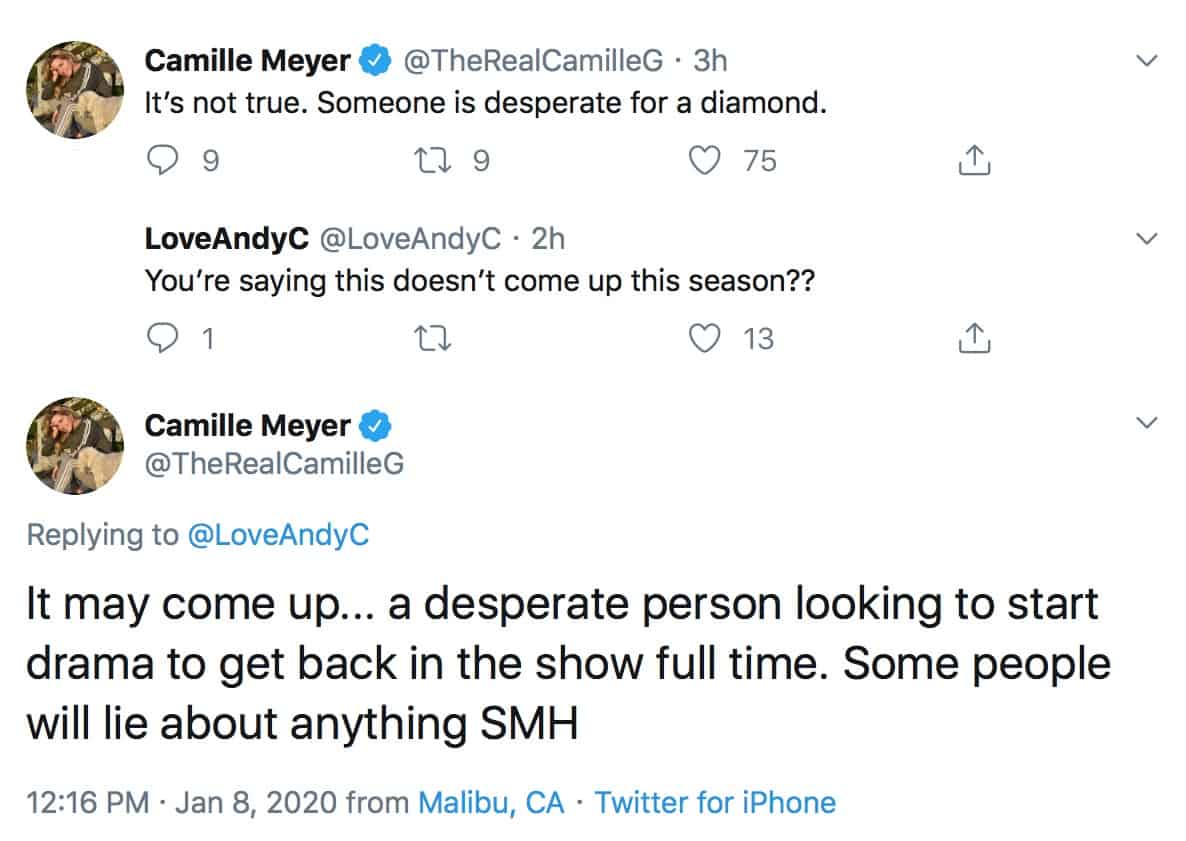