Home Real Housewives of Beverly Hills News RHOBH Star Kyle Richards Accuses Dorit Kemsley of “Trying to Get Back” at Her by Bringing Up Her Sharing of a Bed With Teddi Mellencamp, Claps Back at Dorit for Comment About ‘Having a F–king Life’

RHOBH Star Kyle Richards Accuses Dorit Kemsley of “Trying to Get Back” at Her by Bringing Up Her Sharing of a Bed With Teddi Mellencamp, Claps Back at Dorit for Comment About ‘Having a F–king Life’

by Lindsay Cronin May 7, 2020 61 comments
ShareTweetWhatsappPinterestRedditTumblrMailFlipboard 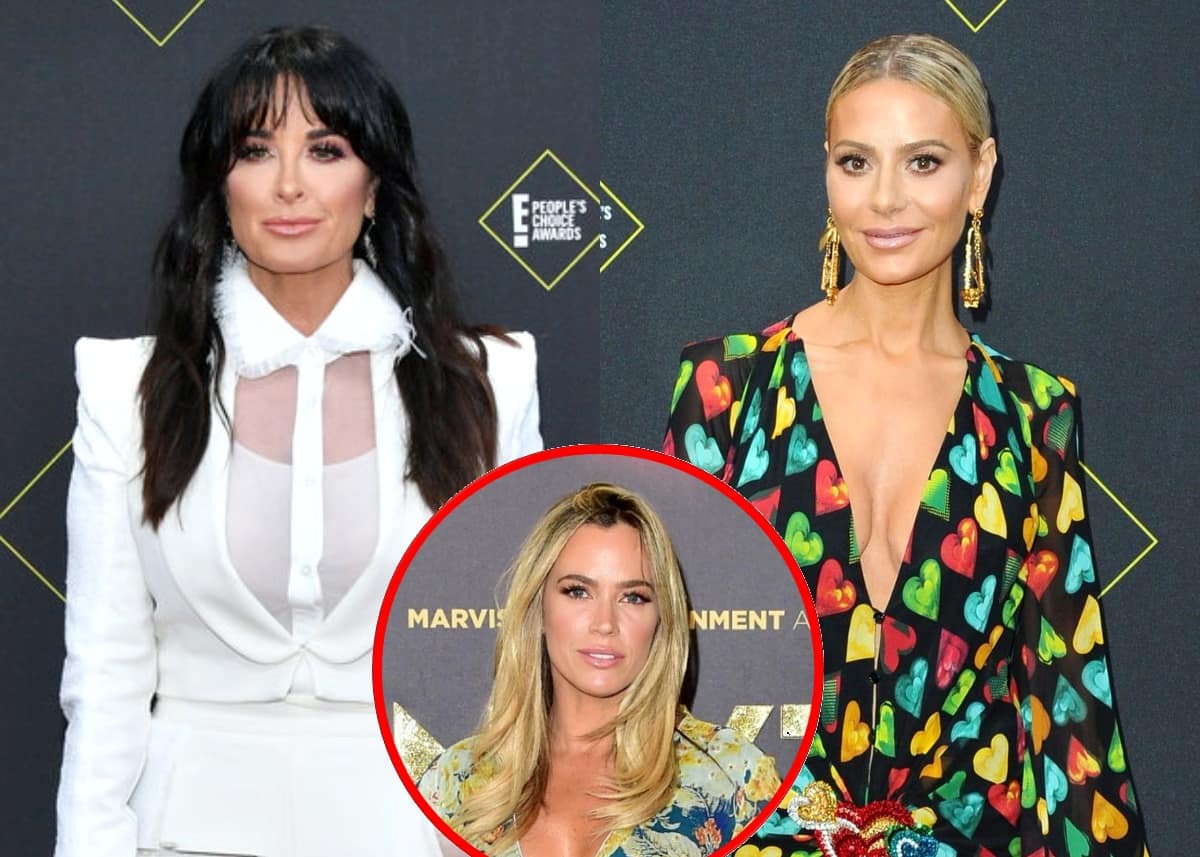 Kyle Richards wasn’t happy with Dorit Kemsley during Wednesday night’s episode of The Real Housewives of Beverly Hills. Kyle took to her Twitter page to express her frustration with her co-star’s behavior.

After a glam session resulted in Dorit arriving late to Teddi Mellencamp‘s accountability event, Kyle slammed her for excusing her behavior with claims of “having a f**king life” before accusing her of attempting to start a rumor about her and Teddi by mentioning they had slept in the same bed in Provence, France. Kyle also questioned why Dorit came to the event in the first place.

“Saying you having a f**king life but came late because you wanted to have your hair and make up done doesn’t [exactly] classify as having a life,” Kyle tweeted on May 6.

After Kyle called out Dorit for her bizarre excuse for coming late to Teddi’s retreat, Dorit made a mention of a past moment between Kyle and Teddi in which the two women shared a bed.

Looking back, Kyle believes Dorit did so out of revenge.

“In an attempt to get back at me for calling her out , Dorit tried 2 make an issue out of Teddi sleeping in my bed one night in Provence,” Kyle said. “I mean if anything exciting had happened I’d be happy 2 share. But I am attracted to men. Especially my man. And Teddi is like a little sister.” 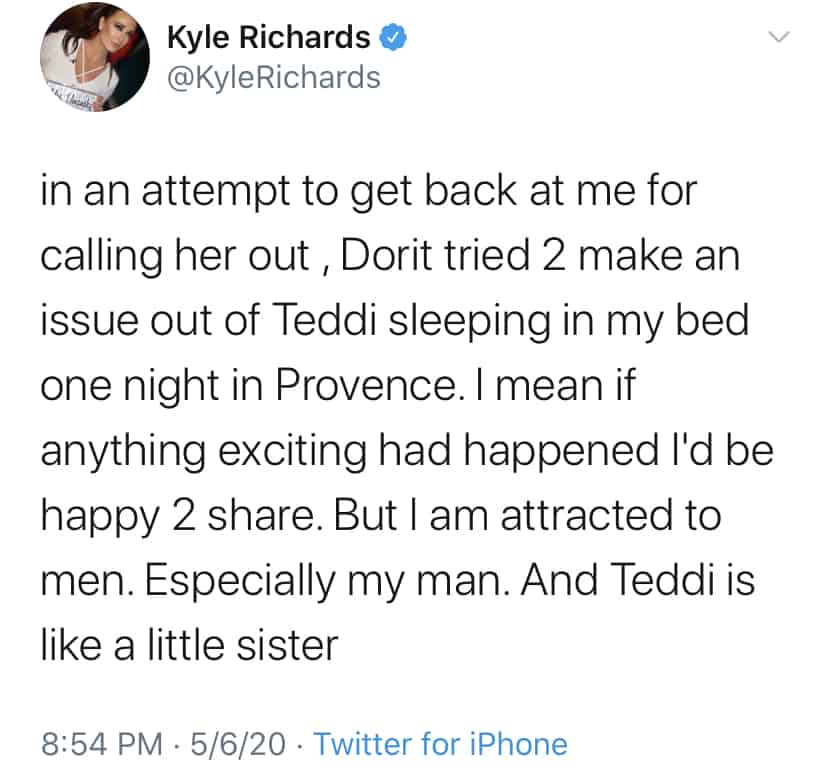 “I grew up with all sisters. Having a friend sleep in my bed on a trip is totally normal to me,” Kyle added in another tweet. 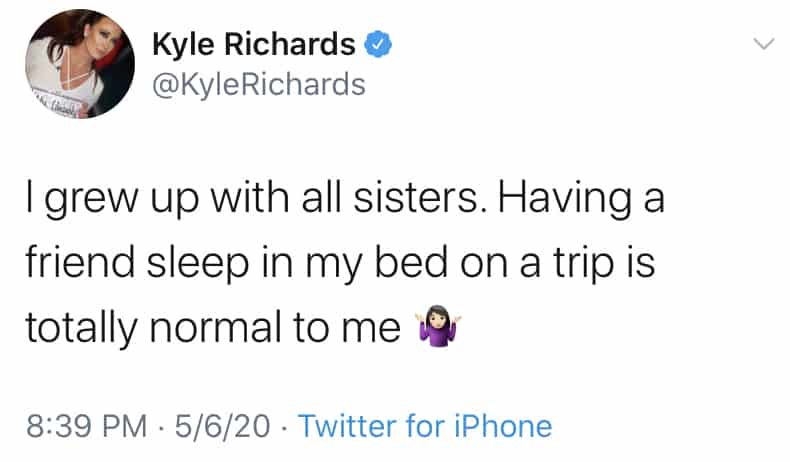 While Dorit has said that she attended Teddi’s event to be supportive of her friend, Kyle was confused by her behavior on Wednesday’s RHOBH. 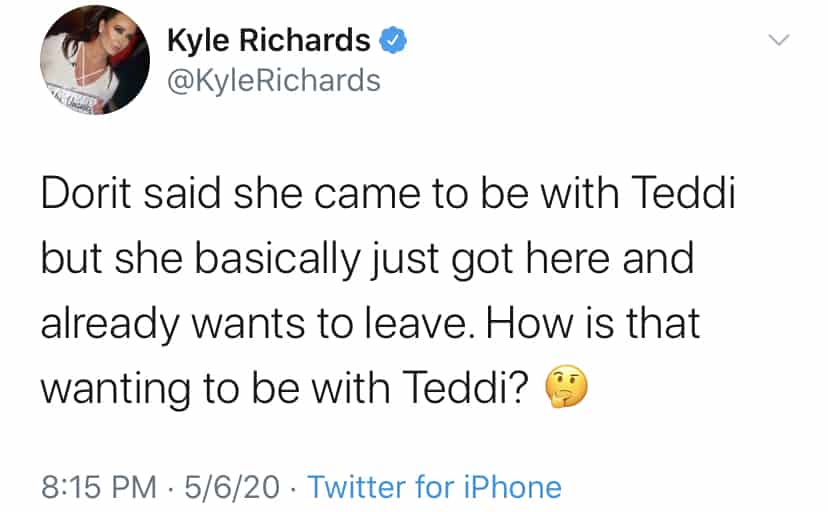 Kyle continued on with a couple more tweets about Dorit, one of which addressed the glam drama between them and another that mentioned why she had attempted to alter Dorit’s hairstyle.

“First of all, I was not upset with Dorit in the beginning …I just don’t get putting vanity/ glam before friendship,” Kyle shared. “It all went south when she said she had a f**king life.”

“Omg, I tried to wipe away Dorit’s hair not realizing it was supposed to be like that,” Kyle explained. “Not the way to start to repair things.” 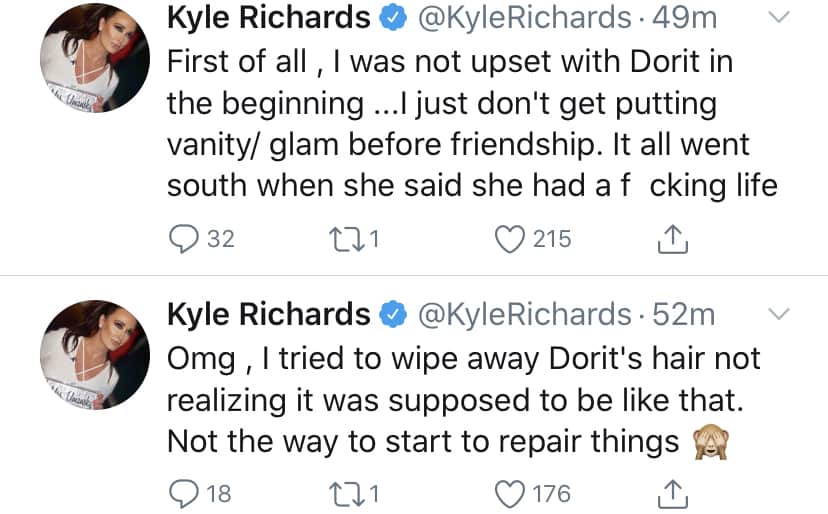 As for Dorit, she shared a photo from her glam photoshoot that day on her Instagram page ahead of the new RHOBH episode, writing: “The picture that caused such an uproar on tonight’s episode of #rhobh If only I was looking into the future here and could see how upset this pic would make someone ????.”