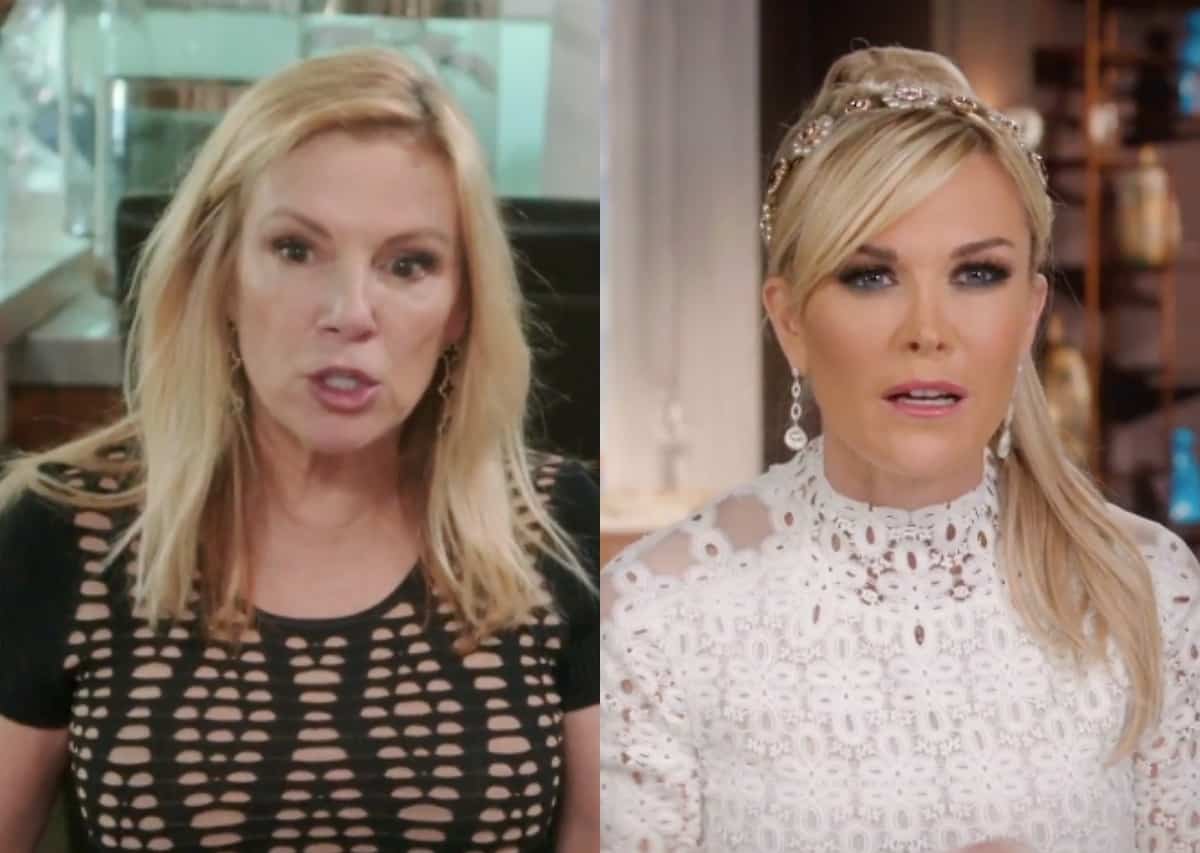 On this week’s episode of the Real Housewives of New York City, Ramona is making it all about herself — again — with another birthday party. Tinsley is finally getting her happily ever after!

Luann is meeting with Ben, her producer, to discuss her upcoming show formats. She is having some difficulty opening the door into the building, though. LOL! Luann is looking to revamp her show. She is looking for comedians to liven it up and to sex it up with Sonja.

Luann wants Sonja to bring her sexy J to the show. Sonja just wants to get paid for this show. She claims last time her hair and makeup was partially comped. Sonja also doesn’t think Lu is as talented as she perceives herself to be. FYI: So do we, but we just play along to be nice to show support! She is willing to help her even though it isn’t too lucrative for her. What else is Sonja going to do if she isn’t doing this? Washing her underwear in her bidet?

They audition some comedians for the show. I think she should just use Sonja to fulfill that role since she is just like cheap labor. Sonja is funny, though, in that kooky aunt sort of way, or like a drunk uncle who your mom tells you to ignore when he says inappropriate things.

Tinsley calls Leah after getting back from Chicago. Scott called and invited her to Chicago and told her to bring her dogs. I suspect he proposed or told her of an impending engagement on this trip.

Leah shares that Dorinda is inviting them to the haunted house Blood-Manor. Tinsley is game even though Dorinda has been out for her blood lately. She is just like a vampire trying to drain all of Tinsley’s happiness out of her.

We are headed now to Blood-Manor. I love this kind of stuff with all of the spooky costumes. It was pretty funny how the zombie scared the sh*t out of Tinsley. Sonja gets so scared she needed a diaper. Dorinda isn’t even fazed by the zombie. That is because she is constantly talking to the dead and living in an alternate universe.

Luann arrives already dressed as a cougar for a Halloween party. Tinsley sees the cackling twins and mistakes them for Sonja and Ramona. BINGO. Production shows plenty of examples of that. The costumes and makeup are pretty awesome. Sonja needs to check her diaper, though!

The ladies need to go to the tequila bar after the haunted house. All they can talk about when Tinsley leaves the table is that Tinsley was with Scott again. Who f*cking cares? Dorinda is busy Instagram stalking her. The vitriol she spews Tins’ way is really uncalled for and makes Dorinda look like a nasty shrew. Maybe that is who she should be for Halloween?

Leah blurts out that Tins is going to get married. Dorinda has to shadily say now you are finally moving out of a hotel now?  She just can’t be happy for her or just pretend to. Listen, Dorinda, swallow your nasty bitter pill and stop behaving like a jealous bi*ch.

Elyse recognizes that the other ladies are dissing Tinsley. Dorinda, aka Regina George, is acting all mean girl and ignoring the announcement. I don’t know what Bravo did with the old Dorinda but we want her back!

Ramona, Dorinda, and Sonja are looking at some event space for her birthday party. She is on the phone acting all flirtatious with her boyfriend nicknamed the “boat man.” It seems like Dorinda and Sonja thought they were going somewhere local. Ramona actually hijacked them and is taking them Lord knows where to find the best bang for her buck.

Ramona is having Larry Scott plan this party and he is the best… according to Ramona. She claims she has 60 women friends that actually like her? Ramona is basically throwing these two a bone since they show a clip where they weren’t part of her fancy celebration last year. She basically says, “This is all about me!” When hasn’t it been, Ramona?

Ramona is considering this a coming out single party since she is finally realizing she is single. This planner is acting like she is some kind of queen or bride and deserves this fancy party. Larry Scott considers her the chandelier. Dorinda is tired of watching the Ramona show. Me too, change the channel!

Dorinda doesn’t understand why she needed them to come since their opinion wasn’t needed. She feels they were being used as a promotional piece for this guy to advertise his business. AGREED. I do agree with Dorinda — stop using us to get a bargain. Ask your phony Hamptons ladies who lunch next time for a favor!

Ramona and Tinsley meet for drinks to chat about Scott. It is funny that Ramona is checking out the bartender to see if she is competition. That cougar is always on the prowl and looking at her much younger competition. Luann joins them to share in Tinsley’s good news, finally. They need to make sure they weren’t followed by Dorinda’s PI, though!

Ramona brings some random guy who is allegedly her date. She always claims to double book her nights. There is like six degrees of separation with these guys since they are all connected to the Regency. What is in the drinks in this place? The guys from here all come across as creepers just like Tom and Harry Dubin.

Tinsley says her mom, Dale, is kind of unsure about them getting back together so quickly. She will miss Luann’s Halloween party since she pretty much has her bags packed to get that relationship locked down. Scott is building her a closet so that shows commitment, right? Who does she think she is — Carrie Bradshaw circa Sex and the City? Ramona thinks he is a winner since she has friends who still have no closets.

Tinsley and Dale are packing up the hotel room. Dale starts crying since Tinsley won’t be living on the East Coast anymore. Boo hoo, Dale, let Tins have her moment and remove her from your tit.

Leah comes over to view the moving process and discuss Tinsley’s future. Sonja arrives and Dale gets all teary eyed over what she did for Tinsley. Leah seems genuinely happy for Tinsley and her happily ever after. Tins is saying her goodbyes to NYC and RHONY and heading to marry her dream guy Scott in Chicago! Will there be a Real Housewives of Chicago in her future? I wish her the best!

Still to come, there is more crazy Leah with her smiling vagina?  We then experience Day of the Dead in Mexico. Ramona wants to shut the cameras down since Leah doesn’t fit her narrative of classy ladies with etiquette. The relationships are shifting and Leah is cheapening this group? Wow! You have got to love the hypocrisy! Take care and be safe!