RHONY Season Finale Recap: Dorinda Goes Off on Leah About Tinsley at Sonja’s Party as Luann Debuts Her Single 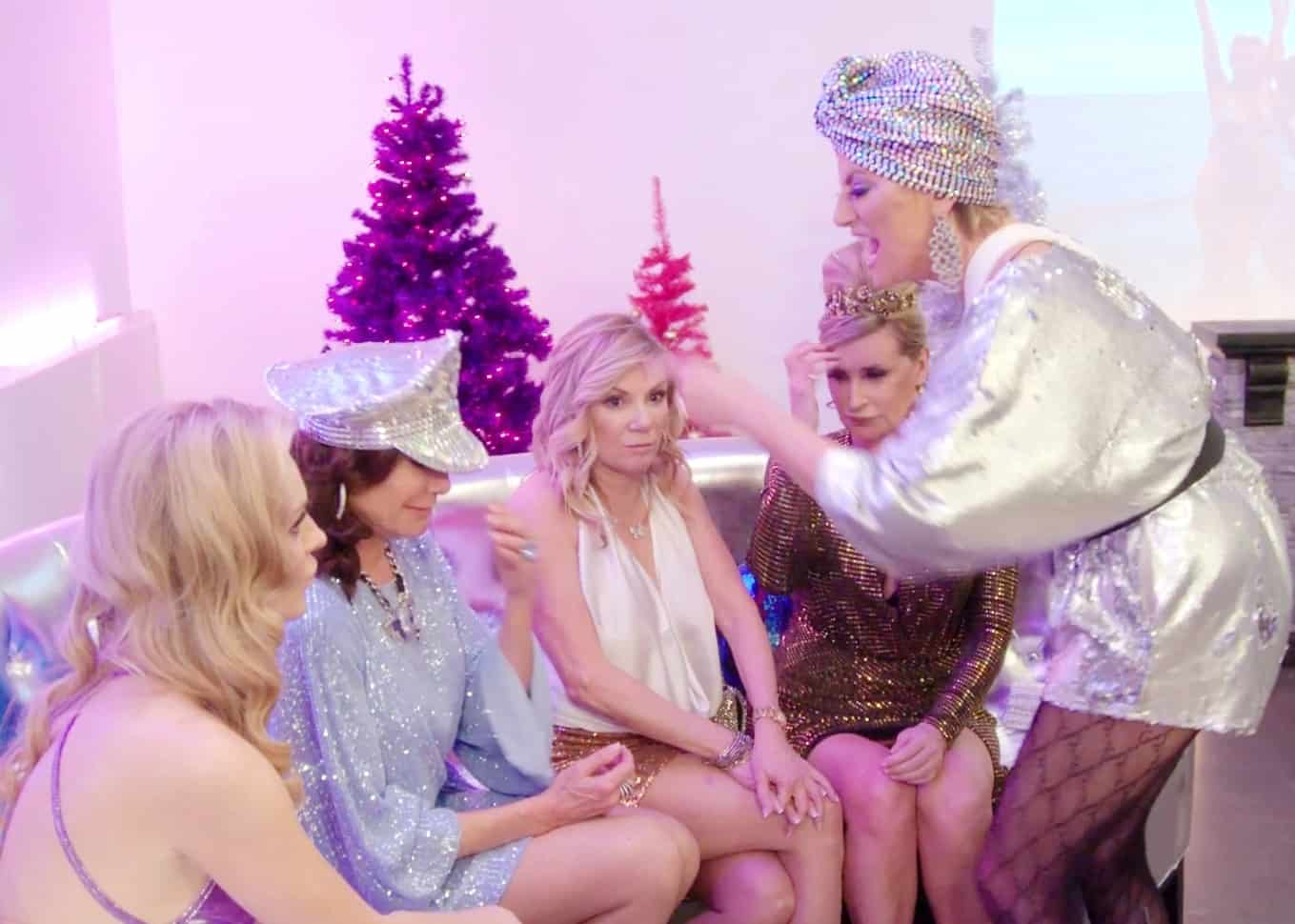 This week on the Real Housewives of New York City, it’s the season finale for the ladies of the Big apple! We will be playing some Drag Queen bingo and the Countess will get her Cabaret on! Let’s get this show on the road, shall we?

Martin is back to train Leah! Maybe he can work some magic on her like he did for Tinsley? Remember the pep talks he used to give Tins? He literally scared her straight and back into Scott’s arms in Chicago.

Dorinda has had her hand surgery and she is loaded up with Vicodin. She is still going to make Sonja’s party, though! Dorinda thinks that Luann is going to want her outfit for her show because it is Jovani-like! She should get stock in Jovani with all of the mentions.

Luann is working on her vocals with Barbara Streisand’s producer/songwriter, Desmond Child. He has a perfect song for the Countess Diva. Desmond really is a good sport and he is trying to find some positive comments on that singing. He thinks she’s a hoot but nothing about the vocals, though? Desmond tells her to focus on adding some sass to it. Luann is up for the challenge since she is a born diva.

Dorinda and her stylist check out her old condo. She talks about her hand surgery for her bible bump. Dorinda describes what was removed from her hand. The interviewer screeches in the background when she describes an octopus-like bump with tentacles oozing out of her hand. YUCK! Dorinda has had a broken rib, hand surgery, and a flood. She is now fixing this place up. The stylist is concerned since Dorinda is leaning on the window, which makes him nervous. She is feeling pretty groovy with all of those pain meds and thinks 2020 will be a good year for her. Hmm, maybe not so much.

Ramona visits Sonja’s townhouse because she wants to see the updates. Sonja is finally willing to downsize and let go and move on. They do some bizarre photoshoot with Ramona lying on the rug. I would be afraid there would be dog pee or poop on it that an intern hasn’t cleaned up yet.

Leah, Bunny, and Kier are making a gingerbread house at Abigail’s Kitchen. Bunny wants Leah to take some time off to spend with Kier. She just wants her to leave the phone and stay off social media. Leah wishes her daughter had heard Bunny’s speech since she thought it was Oscar-worthy. She shares that her mom recently told her to go to hell. Leah fails to mention what she said prior to provoke that, though. I think telling your mom to f*ck off deserves a pretty harsh response. The appalled look on Abigail’s face upon hearing that is priceless. This relationship is definitely a work in progress. It is pretty telling when Bunny thinks she looks like a witch in the gingerbread house. Leah probably purposely did that.

Leah is going to the run-through of Luann’s Cabaret show and dragging her sister Sarah with her. She thinks the other ladies are over the whole Cabaret thing and she is new fresh blood. There is a bit of a Q&A portion of the show. Luann’s attempts to be humorous fall a little flat, unfortunately. I wish they used the gong to send her off the stage!

Sonja gets called up and she is going to do an impromptu part. She is asked the M-F-K questions and she will kill Ramona. Agreed. Sonja won’t f*ck Tinsley since she is unf*ckable? Not nice, Sonja! Ms. Morgan is definitely jelly that Tinsley found her prince. I am sure Scott would take issue with that comment. Sonja will marry her after her second divorce, though. She will f*ck Dorinda because she may be a sleeper hit. Now that is funny since Dorinda does like her naps!

Leah is happy that Ramona didn’t show since she can be herself and show her vagina if she wants to. Luann doesn’t feel the love from Ramona since she CLAIMS she supports women. Let’s be clear: this group is always all about outdoing each other. It is not about female empowerment.

Sonja needs to get back in shape and she feels she let herself go. She needs to focus on her health.  Leah makes plans with Sonja to work out. They are going after bingo, hangover or not! Leah then says how much she loves Sonja and thinks she is a good drinking partner. That lovefest seems to have ended.

I have to say I love the theme of the Drag Queen Bingo party. It is catty and campy and a perfect setting for these New York broads. This group of ladies really enjoys getting into costume for a theme party. Dorinda seems to have a closet fit for a drag queen. Even RuPaul would be proud of it.

The layout for the party is full of sparkles and glitter with hot shirtless elves. Sonja thinks one of the drag queens is Luann. LOL. Dorinda arrives in her sparkly turban and she recognizes some of the attire in this room. She swears the queens raided her closet! Leah is wearing a vintage dress with sneakers? Her hair looks really good, though. Luann is impressed with Sonja’s parties. She does have the ability to throw things together. Desmond Child even comes to the party and Luann is thrilled to see him.

Ramona brings her friend Ron, which Sonja isn’t pleased about. You don’t bring straight dates to this kind of party. Ramona acts all surprised that there aren’t straight guys at this party. Can you say clueless and self-involved?

Ron has to remind Sonja that they made out six years before. That is pretty bad when you have to be reminded of someone you messed around with. Ron is such a housewife hanger-on. He gives me Harry Dubin vibes #gross. Luann is glad he is Ramona’s plus one instead of Missy. She is peeved that Ramona didn’t come to her show. Ramona didn’t open the attachment so she gives Lu “business advice” to put “please come to my show” in the title line! She has an excuse for everything that one!

Sonja and Luann argue over some of the jokes told during the M-F-K show. Luann wants to take credit but Sonja isn’t having it.

Dorinda and Leah discuss Ramona missing Luann’s show. They think she can be very insensitive. Ron works his way across the room to Leah like a slithering man wh*re. He thinks he has a chance with Leah. Ron tells her she is in her prime and he can make her shine. What a wordsmith you are, Ron! NOT! Leah will never go there, and she is shocked that Ron and Ramona are just platonic. She thinks they should do a friends with benefits thing. Ramona acts all virginal and offended by that suggestion.

Sonja addresses the group and throws Ramona under the bus for bringing a boring straight friend to the party. Ron worms his way into Leah’s ear and says, “I am the boring friend?” Leah actually recoils from him. Dorinda thinks this is going to be a disaster and she will just smile her way through it. They start playing bingo. Dorinda is doing well or just being overly enthusiastic. Ramona messed up Dorinda’s card since she likes the number 69 since it is graphically pretty. Sonja thinks Ramona needs to stop focusing on her vagina and that number when she has no idea what it signifies.

Sonja introduces Luann and says she has met a lot of drag queens but none with legs as long as Lu’s. Luann is not crazy about the intro but she will take it since she won’t miss an opportunity to grab that mic! She will sing a little auto-tuned track preview of her song “Viva La Diva.” Dorinda is just glad she isn’t doing another rendition of “Happy Birthday.” Everyone is dancing to her new song and Leah thinks it is a little catchy. It is a perfect end for the season, or so we think…

We then get the end of the season updates:

Lu sold her round house and is focusing on her memoir.

Dorinda is unemployed is writing a new book called Making it Nice, Making it Through. She won’t be wearing Jovani on the cover, though.

Leah quit drinking again and things are better with her mom. She is also going to quit her addiction to f*ckboys.

Sonja’s townhouse got a facelift and so did she. It appears the facelift was a better investment since she got no bidders on the townhouse.

Ramona moved into her new building and moved up to a higher floor so she has better Instagram views!

Leah mentions Tinsley’s name and is thankful for the introduction to this group. Dorinda, the principled person, goes off the chain and says Tinsley breached her contract. She says Tinsley left us and almost ruined our show. You have got to love the irony of that. Dorinda then says, “She is a bit*h and doesn’t want her name mentioned.” Wow, the vitriol from Dorinda doped up on pain killers and booze is insane. Luann can only focus on Dorinda not coming to her show. What a way to end a season with that insane outburst busting down that fourth wall again! Phew! Dorinda was on fire or something this season!

Next week, we have the reunion and Tinsley is back! This should be interesting! Have a great weekend and see you next week for the reunion.

Side note: What is going on with Dorinda, Bravo? We first find out that she was allegedly canned and now Bravo allegedly might have some regrets? Which is it? Is Ms. Medley putting out the rumors herself to save her own reputation? What do you all think about the latest news?