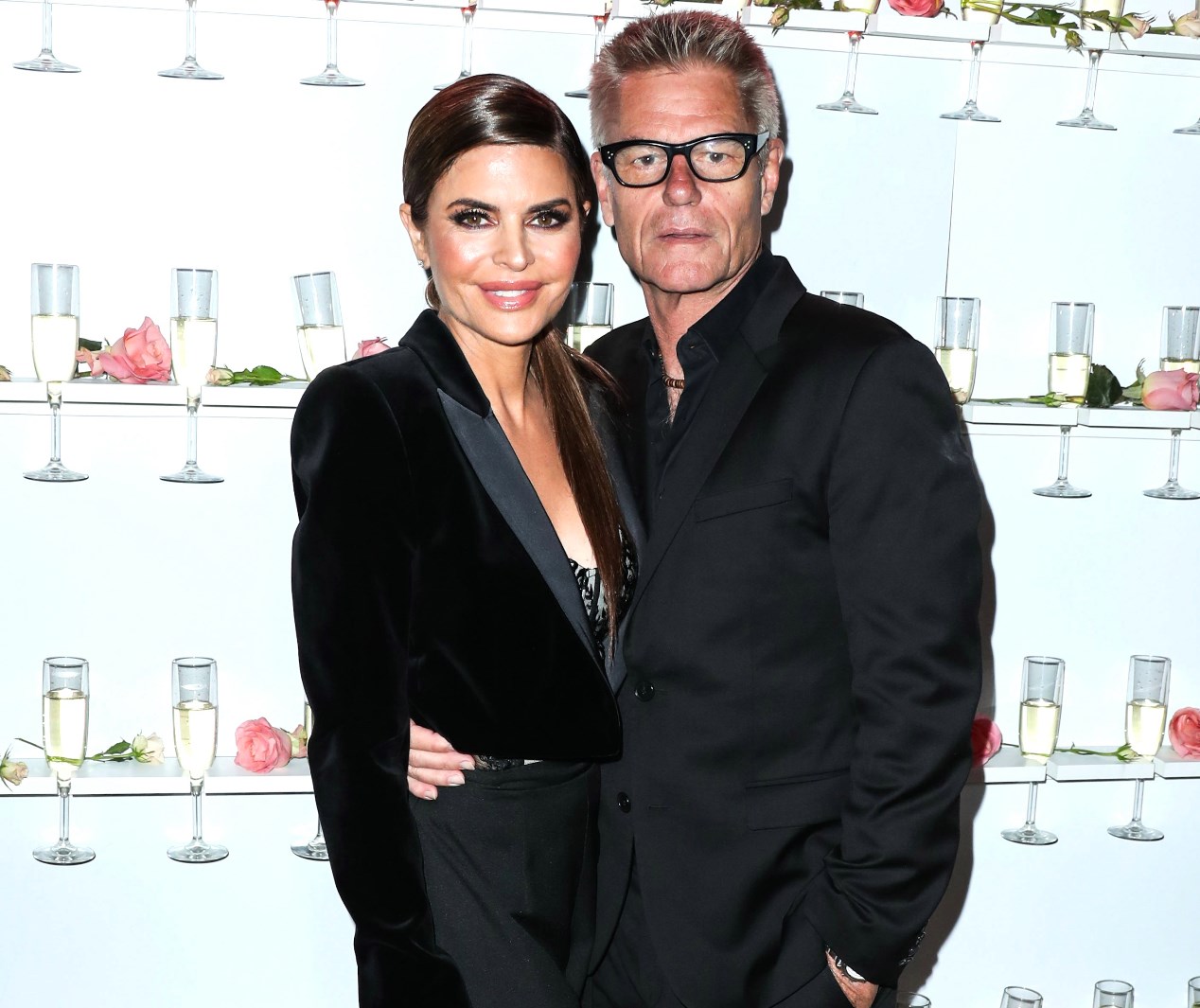 Lisa Rinna is reacting to a swirling rumor that suggests her actor husband, Harry Hamlin, has cheated on her with at least two different women.

After a screenshot of a post initially shared on Twitter began generating buzz on Instagram, the Real Housewives of Beverly Hills cast member offered a response to the report as her fellow Bravolebrity, Southern Charm star Patricia Altschul, joked that she was one of the two women mentioned.

“My girlfriend f*cked Harry Hamlin in Muskoka for an entire summer in 2018 – you wanna talk about that [Lisa Rinna]???” the tweet asked, according to Comment by Bravo on Instagram. “Or do you want to talk about his affair with Patricia?”

“Yeah and I watched it was hot as hell,” she replied. “Patricia well she’s kind of [a] downer. I [didn’t] like her so much.” 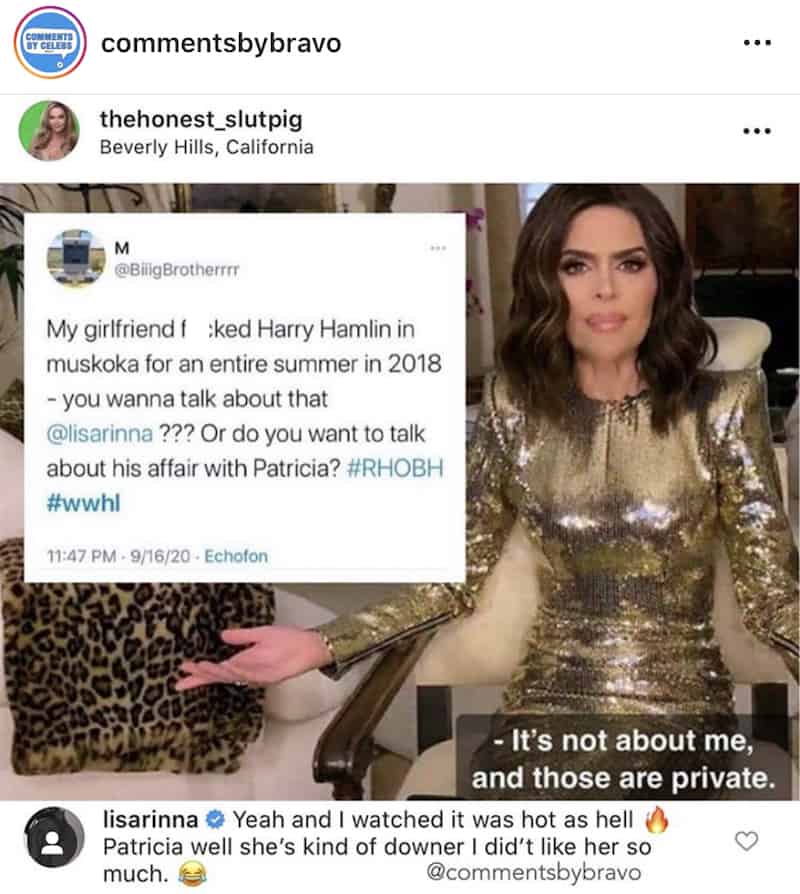 After the RHOBH cast member reacted to the outlandish rumor about her husband of over 20 years, Patricia offered her own response after a fan spoke of the possibility of her being the Patricia in question.

“If Patricia was Patricia Altschul from Southern Charm, I would watch every second of that,” the fan wrote. 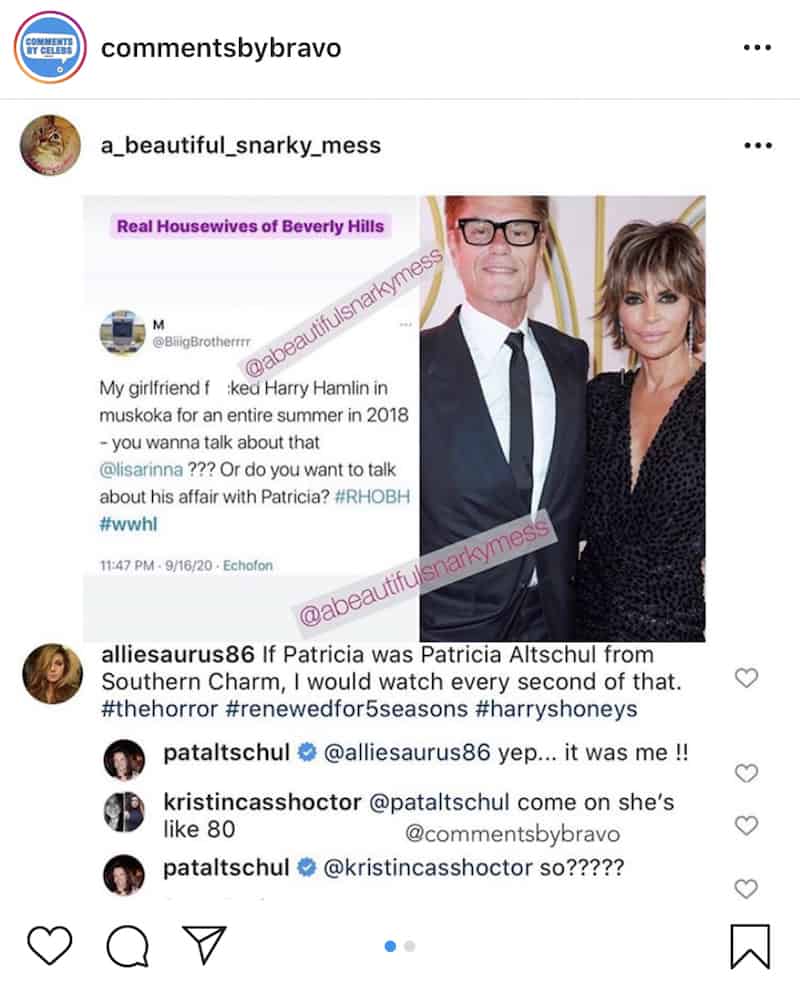 While Lisa stays in the loop with what’s being said about her on social media, Harry revealed last year that he does not pay much attention to social media, nor does he follow Lisa.

“I do not follow my family,” he said on Live with Kelly and Ryan in December 2019. “I’ve been told that it would be very smart for me to just ignore what they do online.”

Harry then said that when it comes to his marriage to Lisa, the two of them truly respect each other.

“We listen to each other, we’re great friends and we really like each other,” he admitted. “Um, also, there’s a thing called sex, you know, that kind of plays into the whole thing. I highly recommend it for married couples.”