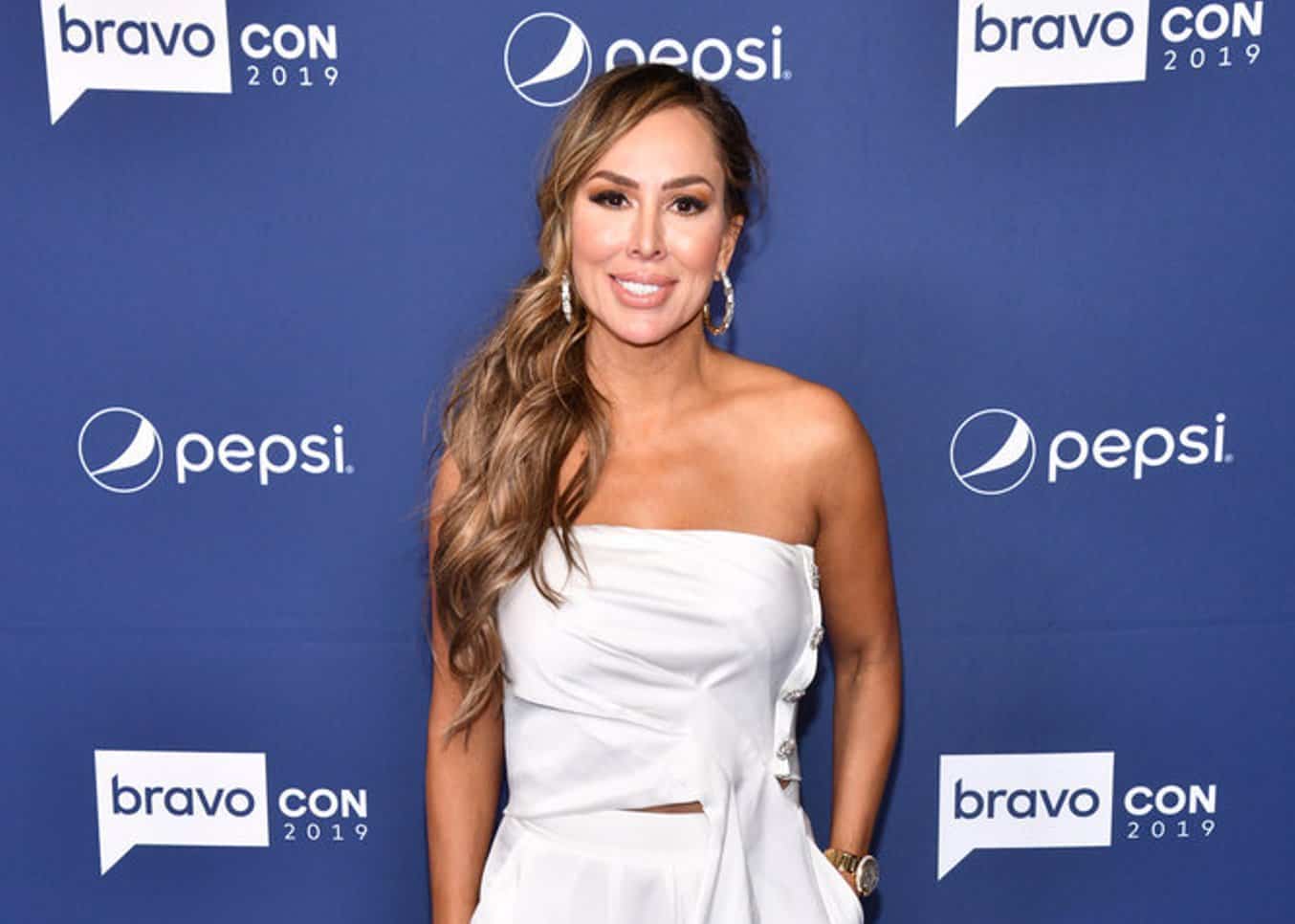 Kelly Dodd is speaking out as viewers of The Real Housewives of Orange County call for her firing.

After sharing a series of photos and videos of herself wearing a “Drunk Wives Matter” hat at her weekend bridal shower, which many believed was highly disrespectful and insensitive to the Black Lives Matter movement, Kelly responded to a fan who called out Bravo for allowing her to remain on their show.

“These are the whack jobs after me!! I am a Mexican and my husband to be [Rick Leventhal] is a Jew!! It says ‘WIVES,'” Kelly wrote in the caption of an Instagram post, which featured a screenshot of the fan’s message.

“I have decided to take a stand alongside BravoingTogether, BravoHistorian, and many other Bravoholics,” the fan began.

In a message shared to their Instagram Stories, the former RHOC viewer said that because Bravo did not fire Kelly for her alleged support of “white supremacy,” they would not be tuning in to season 15.

“For the first time in over 10 years, I will not be watching or reporting on the upcoming season of [RHOC] because of the vile Kelly Dodd. She is a disgrace and I am honestly appalled that Bravo has decided to keep her on their network. I cannot support a show that supports someone who supports white supremacy. The final straw was her wedding shower gift that said Drunk Lives Matter. No Kelly, Black Lives Matter,” the fan explained. 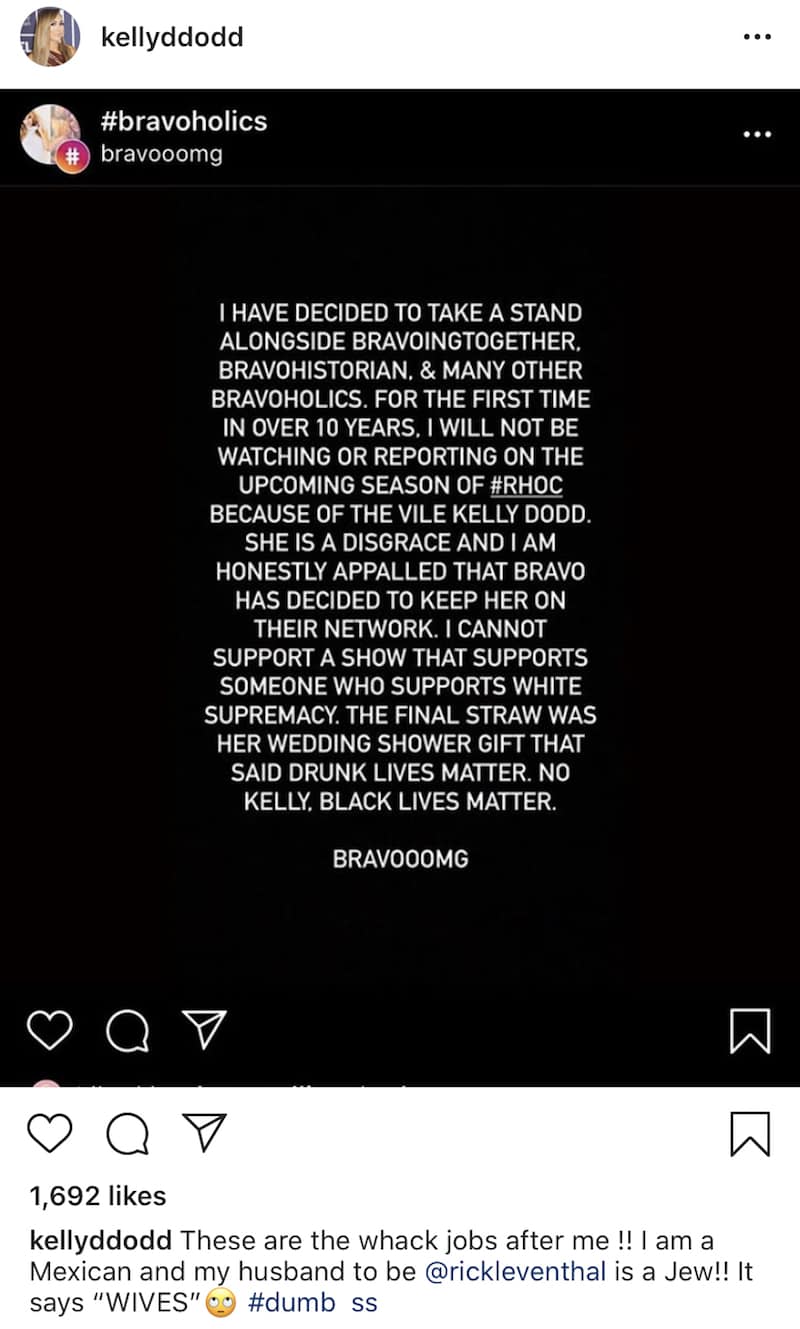 In addition to sharing the viewer’s message, Kelly posted a message of her own in a separate post in which she attempted to silence the backlash over her offensive hat.

“Over the weekend at my bridal shower I got lots of gifts and briefly displayed them. One was a hat with a play on words since I’m about to be a wife, I’m on a Houswives TV show and might be drunk once in a while,” Kelly explained. “It was not intended to offend or make any kind of statement.”

“Of course I support black lives and racial equality. Thank you all. Love, Kelly,” she added.

In the comments, Kelly was met with a couple of fans who weren’t convinced her apology was genuine.

“[Too] little [too] late. I saw your true colors long before this. Never watching that until you are off,” the first person stated.

“Mmmm… This isn’t an apology. You were incredibly insensitive. Here you sound defensive instead of genuinely sorry,” said another. 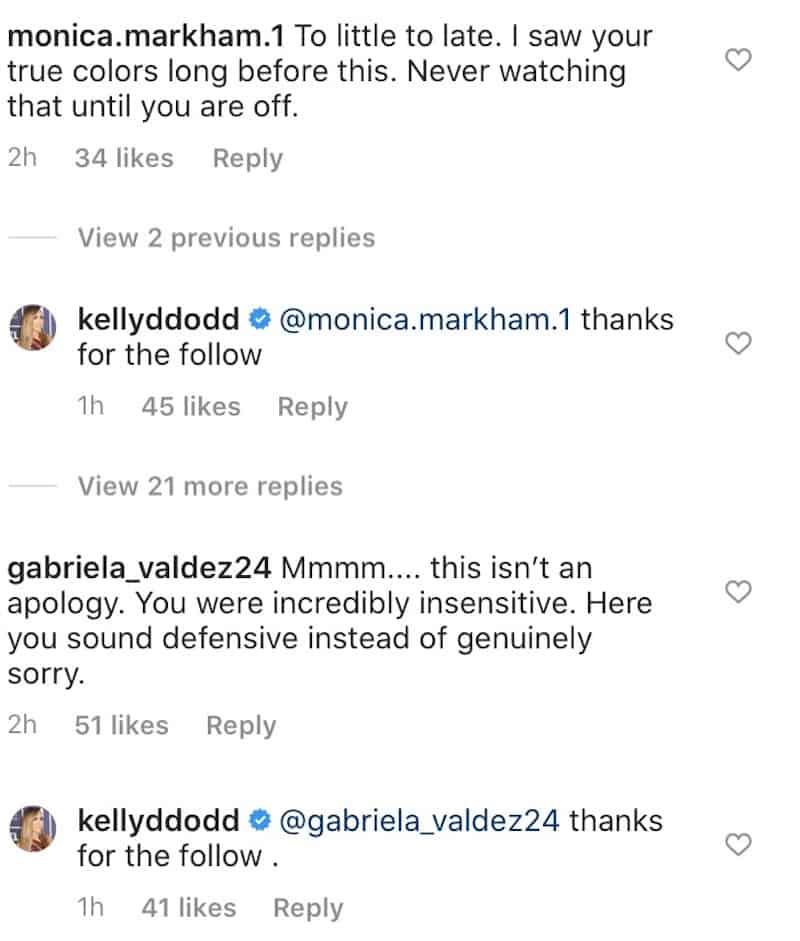 After thanking each of her critics for their follows, Kelly reacted to a few other fans who believed that she didn’t mean to offend anyone with her “Drunk Wives Matter” hat.

“It’s come to the point you can’t post anything anymore without hurting someone’s feelings,” said one person.

Another person pointed out that if Kelly’s followers were offended by her posts, they shouldn’t be following her at all, and noted that Kelly should be blocking people who were bringing “bad vibes” to her page.

“That’s exactly what I need to do! Thank you!” Kelly replied.

In another message, Kelly responded to a person who wondered what happened to “freedom of speech.”

“I can’t say or do a thing,” Kelly complained. “It’s these trolls that will find anything to get me fired.” 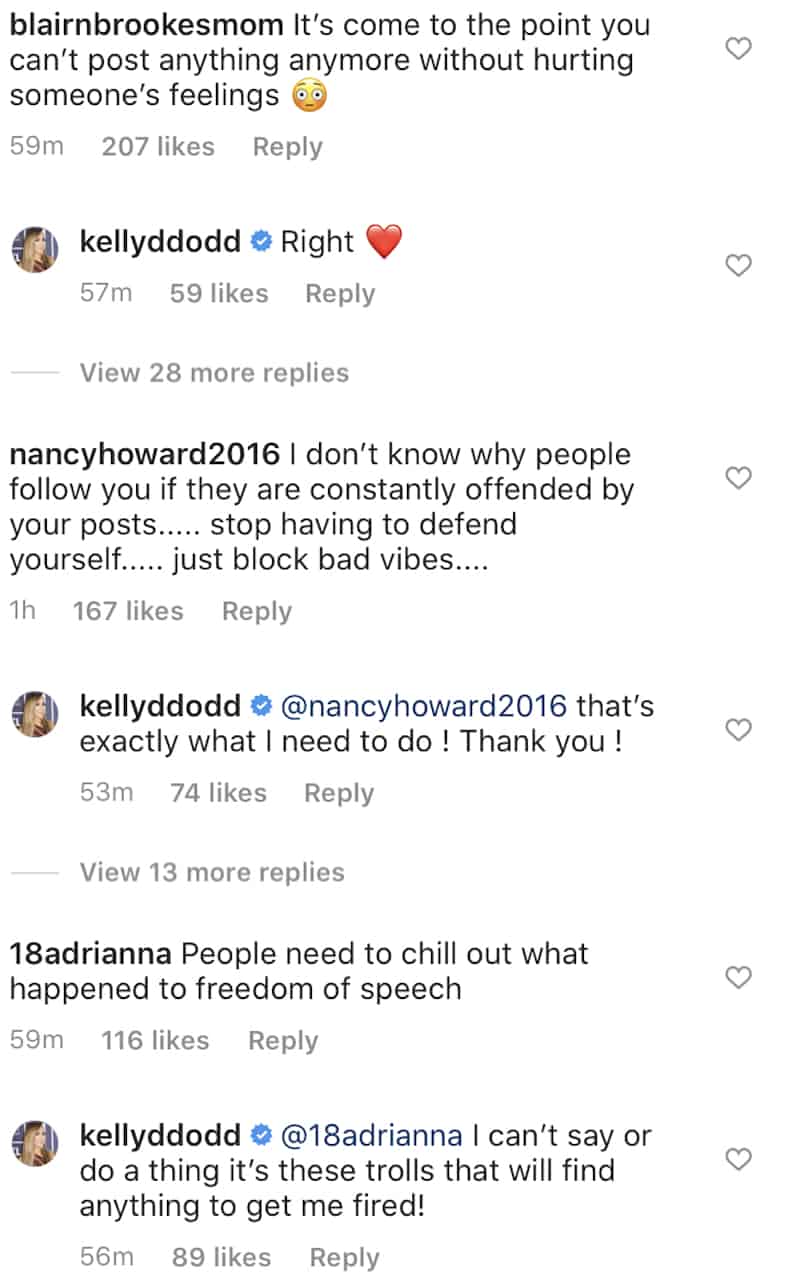 The Real Housewives of Orange County season 15 premieres on October 14 at 10 p.m. on Bravo.