Hannah Ferrier and her boyfriend Josh are engaged.

Just weeks after the Below Deck: Mediterranean cast member welcomed her first child, a baby girl, she returned to her Instagram page, where she showed off her engagement ring as her castmates and other Below Deck stars, including Aesha Scott, Julia d’Albert Pusey, Josiah Carter, and Nastia Surmava, reacted to her exciting news.

“And then there were three…and a ring,” Hannah wrote in the caption of her November 23 announcement.

As soon as Hannah shared this post, Aesha reacted with a heart-eyed emoji as Julia said it was “party time” and that “mamma’s getting married.” 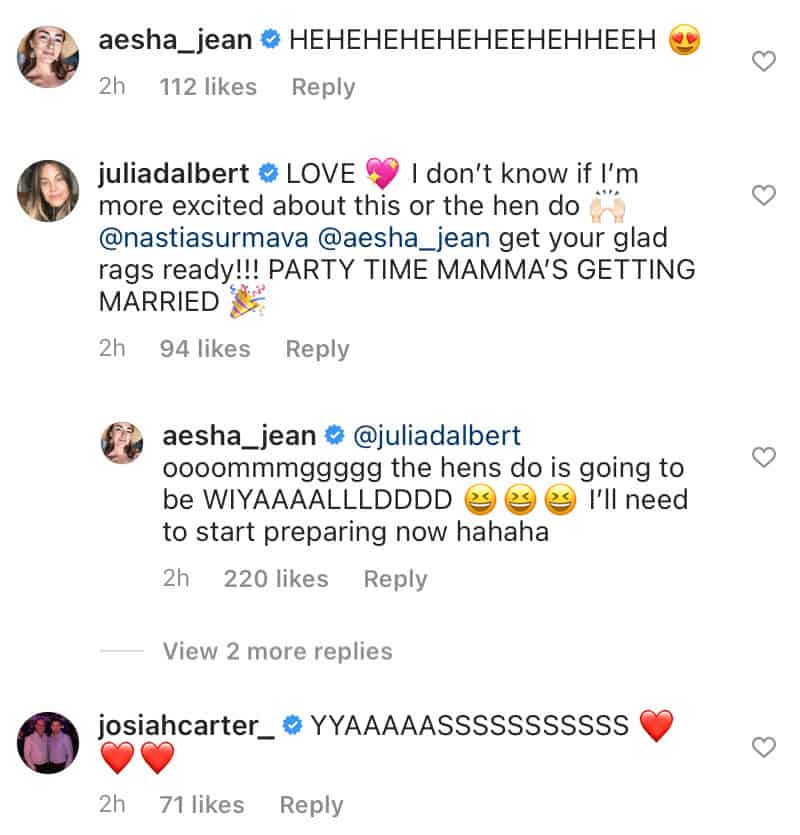 Hannah shared the first photos of her baby girl on November 2.

As fans of Below Deck have likely heard, Hannah was fired from the show by Captain Sandy Yawn amid production on season five after being caught with an unregistered Valium and a CBD vape pen while acting as Chief Stew on The Wellington.

In August, Hannah spoke out about her sudden exit.

“It was just really, really disappointing to me,” she admitted to The Daily Dish. “I felt like it got handled really badly. If you weren’t there, you can’t really judge. I guess I’m just disappointed because I feel like I should’ve been given at least the respect of a sit-down conversation where it could be, ‘This is what we’ve found. Can you explain?’ And it could’ve been a back-and-forth, as opposed to such a drastic measure taken without so much as a conversation after. You know, that was my fifth season with Below Deck. So, I was really disappointed in that, but then I also know that at the end of the day, she is the captain.”

Below Deck Live Viewing – This is also a live viewing thread for tonight’s new episode of Below Deck season eight, which airs at 9 p.m. on Bravo. Please share your comments in our chat below as the episode airs.