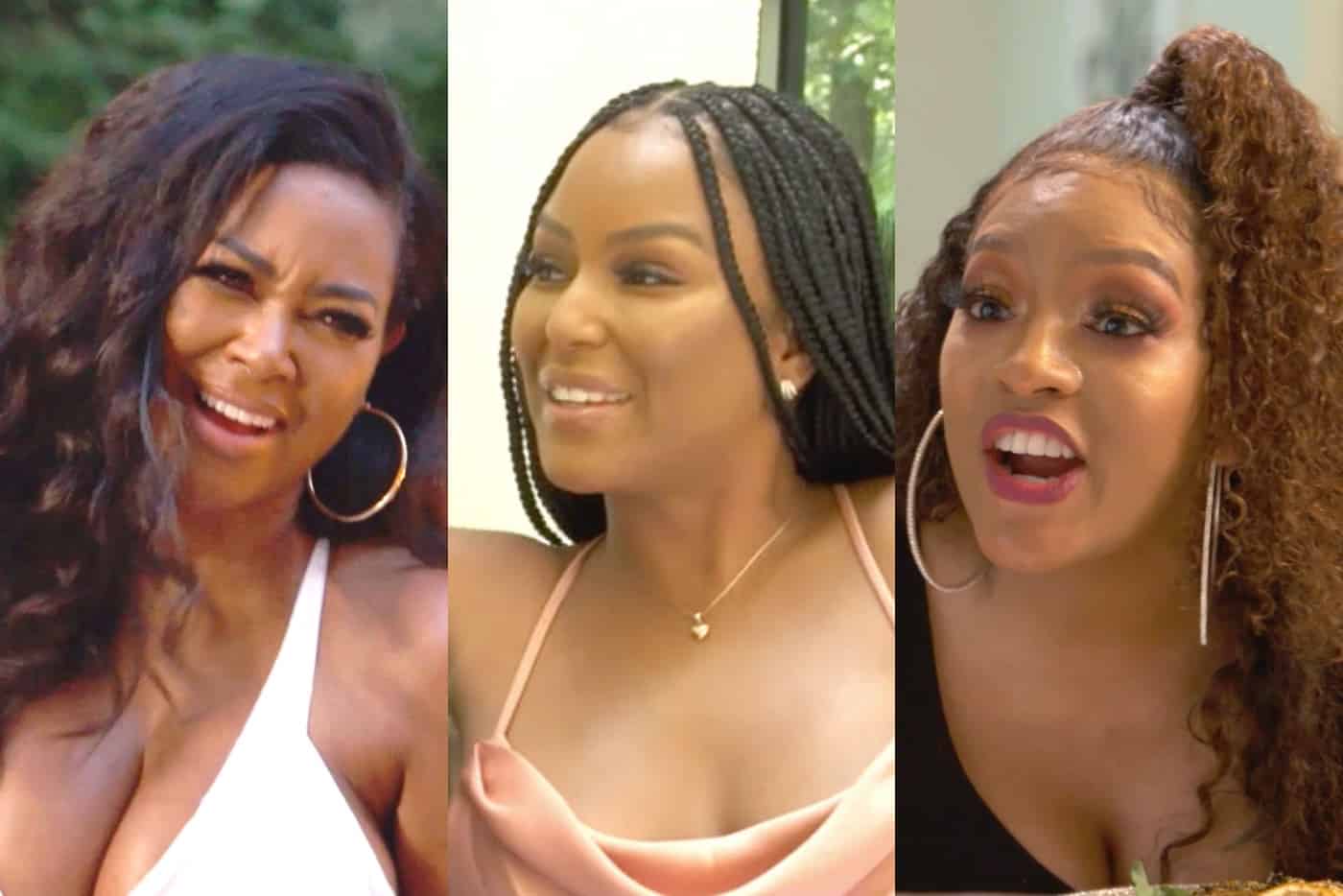 Let’s meet some new housewives this week on the Real Housewives of Atlanta! How will Drew fit in with this group of friends? Let’s see how she can handle this group of feisty peaches!

Cynthia visits Kenya, who is ironically using her leaf blower to blow leaves off her deck in her pink dress. Maybe she might want to fire that thing up and blow Marc Daly permanently out of her life while she is at it? Kenya mentions that Latoya will be joining them. Latoya is a pretty lady but I sense that she has a bit of an issue with TMI. Kenya has decided to steal her as a friend from Kandi. I am sure Kandi will be happy to oblige.

Latoya is still living with her husband, who has filed for a separation. She is giving us some Trinidadian words for cheaters, which are horners. Kenya thinks Marc is the only high conflict individual in their relationship? Wow, this girl needs a reality check and not the one from Bravo either!

Ms. Diane and Lauren are watching baby PJ, who is still growing into a mini-me of Dennis. Porsha calls and shares that she is going to be flying home soon. She discusses how she has been deeply affected by Breonna Taylor’s story. Porsha is really stepping up this season by getting involved and trying to make a difference. I would rather watch her get involved politically instead of trying to force a relationship with the hot dog king.

We meet Drew Sidora and production shows her connection to Eva Marcille. She is an actress and a songstress and is our new Atlanta peach holder. Drew has been acting since she was eight and has a pretty good acting resume. She is married and her husband is named Ralph. Drew has moved from LA and is anxious to see what Atlanta has to offer. She somehow thinks there are some acting opportunities there, but I am not sure it can compete with LA. I could be wrong, though.

We then rewind to: Drew introducing us to her beautiful family and her mother, Mama Jeanette. She seems to have a happy home life but nothing is ever all sunshine and rainbows on these shows, right? Drew has a very opinionated mama who likes to walk in their bedroom at very inopportune moments. Mama J. lives with her and I am seeing another Mama Joyce situation. Maybe she just likes to see her son-in-law in compromising positions? Ralph is a handsome man.

Kandi picks up Mama Joyce so they can attend Riley’s graduation. They are the only two who can go due to COVID-19 protocol. It is sad that a lot of kids this year didn’t get to experience their senior year festivities. 2020 no doubt was a tough year for all!

Porsha and Mama Diane are discussing what occurred in Kentucky. PJ is not happy and throws herself on the ground. She is a typical toddler throwing her tantrum. Porsha discusses where her relationship with Dennis is. Their relationship has been getting a little toxic and I am frankly not surprised. Porsha, get a truckload of hot dogs from him, stick them in the freezer, and then put a giant fork in this relationship, PLEASE!

Cynthia has the ladies over for a little get together for her Black-owned winery tasting that she is trying to promote. Latoya seems to be trying to get some extra attention by asking if things are fake in Cynthia’s house. Marlo arrives with her long blonde braided wig and a sparkly dress. She has definitely not changed her style from frankly any season of this franchise. Ugh, did you all see Kenya’s Cleopatra inspired ITM look? She has no business throwing shade at Marlo right now.

Todd hands Riley a stack of cash for her graduation. Mama Joyce tries to rip that out of her hand but she hangs on to that cash. Ace is beyond sweet telling his big sister congratulations. He is just too darn cute.

Latoya is acting way too extra. She is already sharing that she got a car from a sugar daddy in the past. Kenya throws Marlo under the shady bus sharing that this is her MO. Uh, yeah that is pretty accurate. Latoya shares that she was a stripper in the past, which is somewhat surprising.

Mike’s eyes almost bug out of his head watching Latoya and Kenya interact. Their interaction is really over the top and kind of bizarre. Marlo isn’t recognizing this Kenya. Me either, she never warms up to the new girl.

Drew and her hubby Ralph arrive. Mike and Ralph actually have a little bromance. Kenya is already green with jealousy over Drew and calls her a stray from the pound. She shares in her ITM that she is underwhelmed by Drew. She has everything Kenya wants: a husband who has lived with her since day one and that STILL wants to be around her.

Latoya stands up and says she doesn’t like Drew because of her part in The Game. Okay, that was pretty anticlimactic — it was the character she played that she didn’t like. Marlo is gunning for Kenya by saying that Drew could maybe get her some acting jobs. She also warns Latoya to watch her back with Kenya. Good advice.

Outside on the dock, Mike and Ralph discuss relationships and have some guy talk. Ralph shares he feels the need to run away from home since he has his Type-A mother-in-law who is a handful. Agreed, she seems like she would be challenging to live with, no doubt. You can see Mike’s wheels turning when he hears the challenges that Ralph has. Mike is going to have to distance himself from all of his so-called lady friends in LA to ensure his marriage stands a chance with Cynthia.

Latoya is trying to set Kenya up with somebody. Drew can’t understand why Latoya thinks it is okay to date while you are separated. They have a big discussion over the semantics of separation. I am with Drew on this one. Latoya’s husband most likely won’t be around after a year’s separation, especially if they see other people. That is usually a big hurdle to overcome when you reconcile.

Drew tells the story about Ralph running for the hills to escape his Mama J. drama. She mentions that they have talked about getting a divorce in the past. Kenya sees similarities in Drew’s relationship and hers. She is wrong in thinking there are any parallels between their relationships.

Kenya tells Cynthia that Drew told her that her wig is made out of cat? If there is any truth to that statement, that is something I have never heard of nor want to have a visual of. Sorry, I digress, I am a cat lover.

Kenya shares with Cynthia that she is going to try and get a postnup with Marc. I don’t see that playing out too well for her. Kenya really put herself in a bad position just so she could get her quickie wedding and her dream baby.

Drew and Ralph are having a sexy dinner for their anniversary. She is getting all warmed up listening to some sexy music. Ralph has it all decorated with balloons and he hired a chef to cater their dinner. He wants to know how Drew feels about where their relationship is now. Ralph, please rewind and start over, you might want to rethink that one since she goes deep right away. Drew is upset when Ralph disappeared for three days with no explanation. OMG, please enjoy the romantic setting of this day and put that heavy conversation off for another day when it isn’t your anniversary!

Ralph feels like the pressure is too much for him. He thinks that staying when things are volatile is worse than leaving. Ralph tells her he went to the beach. Oh boy, I knew this romantic dinner was going to go left when he asked that question. Ralph insists he responded to her texts and still maintained contact. He finally admits he went all the way to the beach in Tampa? How many beaches did he pass to go to the beach in Tampa which is the stripper capital of the world? I suspect he wasn’t just putting his toes in the sand…

Drew is upset since he just disappeared without telling her where he was going. She mentions he watches HER on the security cameras. Drew thinks he was surveilling them since he likes to Big Brother them. She resents this invasion of privacy and she should! Ralph wants her to slow her roll or they won’t make it to seven years. Wow, he is really giving her an ultimatum.

Drew leaves the table shouting out that he is a total liar. She is telling the producer she is done with this man. Oh boy, their relationship is going to go south really fast. Wow, why do ladies come on these shows when their relationships are so precarious? I don’t think this will turn out good for Drew and Ralph. Big SIGH since I do like her and him so far.

Next week, Latoya is playing matchmaker for Kenya. Cynthia and Mike are STILL butting heads over their wedding plans. Have a wonderful week, everyone, and let me know in the comments what you all think of Drew and Latoya!