Home Recaps RHOA Recap: Kenya Loses It After She’s Disinvited From Porsha’s Event and Calls Out Cynthia Over Wedding

RHOA Recap: Kenya Loses It After She’s Disinvited From Porsha’s Event and Calls Out Cynthia Over Wedding 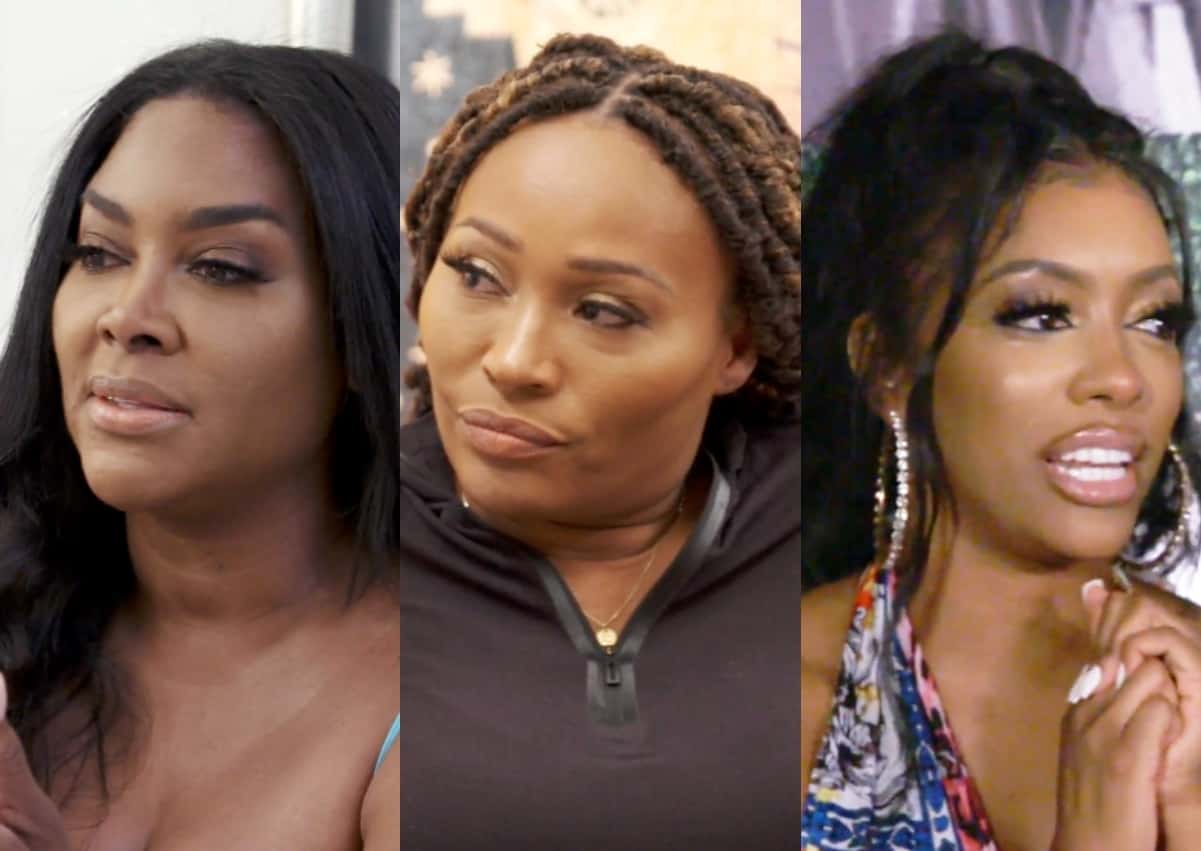 This week on the Real Housewives of Atlanta, Drew and Ralph start couples counseling and Lauren plans a party to celebrate Porsha’s involvement in the BLM movement. Kenya isn’t invited so what could possibly go wrong? Let’s watch and see!

I want to first wish everyone a very Happy New Year! I hope your holidays were relaxing and joyful. Let’s dive into some RHOA family drama, shall we?

Cynthia, Kenya, and Mal meet up for a yoga class. Kenya’s boobs are on display and look like they are going to spill out during the poses. Put those darn things away! Cynthia is really challenged with the poses — she keeps looking the wrong way and looks really uncoordinated.

Cynthia is a bit stressed out about the wedding during a pandemic. That is really a bit of an understatement and honestly a self-inflicted wound. Mal shares that Cynthia went loco when she even suggested the venue could potentially be shut down if a second wave of COVID occurs. Mal thinks that her answer to Mike is that she isn’t sure about the wedding date being 10/10/20 and then she doesn’t want to do it at the venue. Mike is hearing if she doesn’t do it on 10/10/20 then she doesn’t want to get married.

Kenya calls her out about making her special day more of a “filmed” wedding show. The fourth wall is crashing down BIG TIME with this conversation. I HATE to admit this but I 100% agree with Kenya. Cynthia is insulted that she is insinuating that she is doing this just for the show and a storyline #truth.

Cynthia really resents this since she didn’t allow the show to dictate what she has done with her life in the past. She got married to a loser and divorced a loser on the show. Cynthia NOW says she will marry Mike on the sidewalk if necessary. We know THAT didn’t happen.

Kenya, IMO, is green with jealousy. She does acknowledge she was a jacka*s to her last year by almost spilling the engagement news. Kenya seems to be almost gleeful hearing there is trouble in paradise with the betrothed. She is honestly not a real friend to anyone.

Kandi and Kenya are having lunch together. Kenya shares with Kandi that Cynthia is having issues with her wedding date. She seems to be a little too joyous over this. Didn’t she just say that she was going to be nicer to Cynthia? That didn’t last long.

Kenya wants Kandi’s help to plan a surprise engagement party. She thinks more people will come if Kandi makes the invite #truth. I love the big red X’s on who could potentially not come if Kenya plans it. Why are they even planning this crap when they can’t even have large gatherings?

Kenya questions Porsha’s motivations for protesting. She can’t resist shading her, can she? Kenya makes it about the fact that she wasn’t wearing a mask. Kandi thinks that Porsha is doing a great job keeping Breonna Taylor’s memory alive. Me too.

Kandi is curious about Kenya’s friendship with Latoya and wonders if Kenya may be bi-curious. She claims she isn’t jealous of it — she just wonders if they need any toys from her Bedroom Kandi line. LOL! I love Kandi’s relaxed view of sexuality.

Drew and Ralph are having a counseling session with Love McPherson and she asks them both about their relationship goals. Drew says transparency, genuine love for her son Josiah, peace, and less anger. She thinks Josiah needs more than tough love. Drew doesn’t want him treated differently than the other kids.

Ralph has very superficial goals: respect and sex. Well, buddy, those two go hand in hand. Ralph feels like he is emasculated by Drew. He thinks Drew is treating him like her mom did her father. These two really have a very contentious relationship. Dr. Love really has her hands full with these two warring spouses.

Ralph explains why he is the man he is today. He had a very complicated relationship with his mom. Ralph had to be the man of the house since his dad left. He wasn’t getting what he wanted affection-wise from his mom so he moved out to be with his dad. His mom ended up getting evicted, and as a result, the family was homeless.

Ralph’s mom finally apologized for not appreciating him. Dr. Love tries to show how Ralph associates leaving with finally getting an apology attempts to explain his three-day Tampa Strip Club Capital of the World escape. I am sorry but that is REALLY a stretch.

Drew doesn’t deserve to be treated like his mom since she seems to appreciate and love him. She has been seeing her own counselor but she feels she is doing all of the work. Dr. Love wants them to look to the future instead of grieving the past. Good advice, Dr. Love.

Drew is emotional trying to work through this difficult situation. Ralph apologizes to Drew but she wants to see action since he has disappointed her in the past. Side note: We now know that Ralph didn’t want to be a part of this show and relented for Drew’s career. Ralph also claims he suffers from depression and anxiety. I guess he is admitting to this now since he really comes across as a total as*hat this season.

Lauren calls Cynthia to invite her to a surprise party to recognize Porsha for her activism. Kandi and Marlo get invited by Lauren but she wasn’t planning on inviting Kenya. Cynthia asks if she can be her plus one and Lauren reluctantly relents.

Drew and Ralph have to go out of town since Ralph’s father passed away from a heart attack. He feels like he missed out on spending time with his dad. Drew wants to put their relationship issues on hold while they deal with the loss of Ralph’s dad.

Porsha and Tanya head over to the party. She talks about the breakup with Dennis. They are just co-parenting. Porsha keeps getting co-parenting gifts like Chanel purses! Dennis claims the gift is to recognize that she is a good mom. Yeah right, I am sure that is what those expensive gifts are for.

Cynthia calls Kenya and tells her Lauren uninvited her to the party. She thinks that Kenya will ruin it for Porsha. Kenya yells out to her producers behind the fourth wall and wants to know if they know about this disinvite. They respond that they just found out but Kenya is pissed and she wants her hair and makeup paid for. Kenya is so entitled! Get over yourself just like Marc Daly did!

Kenya calls Kandi to tell her that the party invitation was rescinded by Lauren. She thinks Porsha is using the protests as a photo opportunity and her participation in the BLM movement is self-serving. OUCH. Kenya wants to know why Porsha only gets arrested while on camera. Kandi doesn’t believe that Lauren was wrong since there are plenty of times that Kenya disrupted other people’s events. Production then gives us a sh*tload of video to demonstrate this point.

Kandi, aka Foxy Brown, looks great but her lipstick not so much. The thirsty wannabees Falynn and Joi arrive since they are allegedly friends of Porsha. Latoya questions Falynn about her marriage. She goes super shady with Falynn about her husband being basically a sugar daddy. I agree with Kandi — she can be Kenya with steroids and that is one dangerous combination. Marlo arrives with this bucket hat/lampshade looking thing that is just plain awful. This is definitely not a socially distanced party.

Porsha is overcome with emotion when she arrives to see what was done to recognize her contributions to BLM. She sees posterboards of photos of her inspirational Grandfather Hosea Williams and of herself with inspirational sayings. This was really well done and we get to see a really cool video documenting some of Porsha’s journey. I am really impressed with the production value and music.

Cynthia gives Porsha the birthday gift from Kenya for Pilar. She tells her Kenya wanted to be there. Porsha understands why Lauren didn’t invite her since their relationship is rather “Meh.” Kandi invites everyone to another party and the other ladies are game since the invite came from her.

Porsha gives an impassioned speech about the plight of Black people. She encourages them to stop focusing on the material stuff and more on social justice. This was a great and positive way to end the show. Porsha will keep fighting the good fight and appreciates the support she is receiving from her friends. Go Porsha Luther King!

Next week, Kandi plans a super sexy party for Cynthia.  Kenya has to act up again since she didn’t get invited to the Porsha event. She wonders why people don’t invite her! Have a wonderful first week of 2021!