Home Real Housewives of Orange County News Shannon Beador Says Braunwyn “Didn’t Offer Drugs” to Daughter But Rather Where to Get it, and Programmed Number in Daughter’s Phone as “Cool Mom,” Plus She Talks Elizabeth’s Bisexual “Shocker”

Shannon Beador Says Braunwyn “Didn’t Offer Drugs” to Daughter But Rather Where to Get it, and Programmed Number in Daughter’s Phone as “Cool Mom,” Plus She Talks Elizabeth’s Bisexual “Shocker” 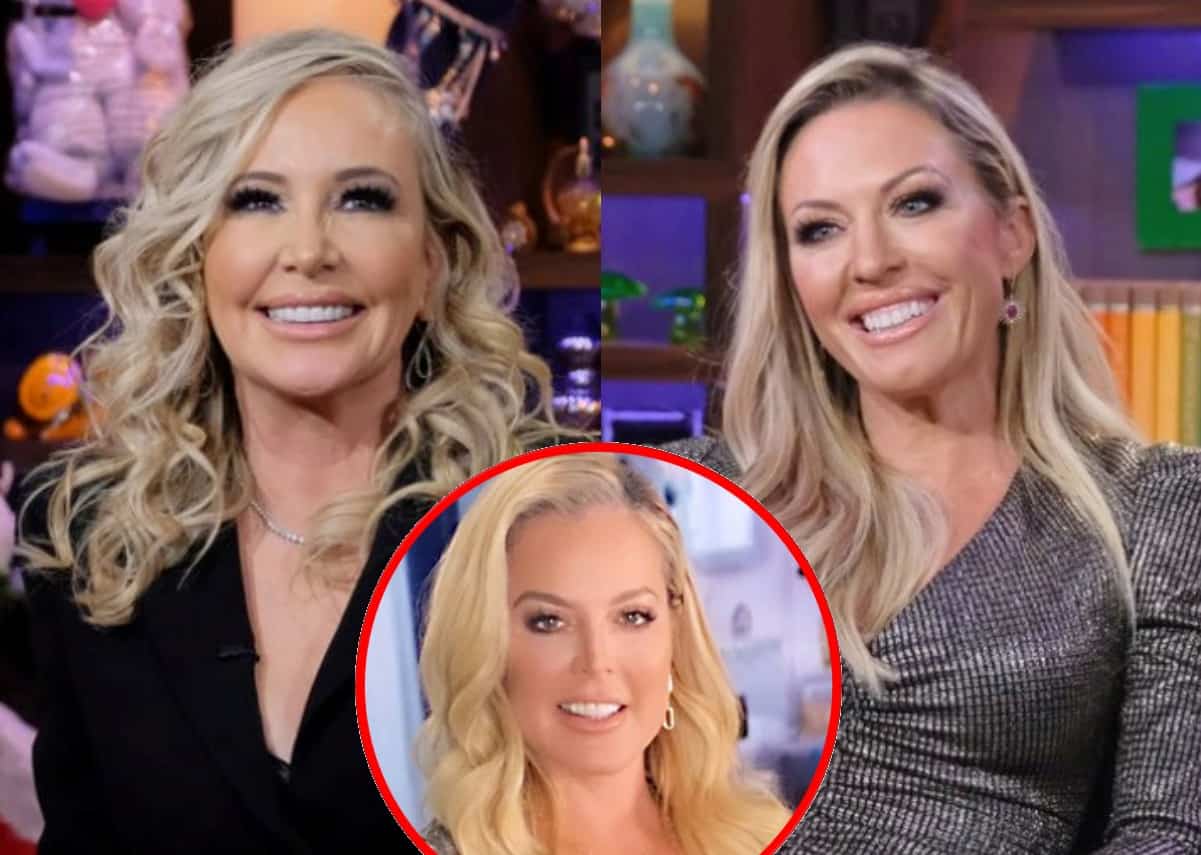 Shannon Beador discusses what went down between her daughter Stella, 16, and Braunwyn Windham-Burke in greater detail and says Elizabeth Vargas‘ bisexual revelation was a “shocker.”

After a rather lackluster season 15, The Real Housewives of Orange County reunion was anything but stale. Although a report surfaced prior to the reunion claiming Braunwyn offered Stella drugs, cocaine specifically, Shannon shut down that claim before part-two aired via Instagram, stating, “no one was ever offered cocaine.”

However, Shannon confirmed on camera that an incident did take place, but she failed to specify the type of drug in question. She did make it seem as though her daughter had been “offered” some sort of substance, and Braunwyn appeared to be extremely remorseful for her actions as she cried hysterically while apologizing repeatedly. Still, some fans weren’t happy with the fact that the topic at hand was basically glossed over or that Shannon was so quick to forgive Braunwyn for her heinous behavior.

Shannon joined former Flipping Out star Jeff Lewis on his Jeff Lewis Live radio show on January 27 and explained what really went down, which seems to contradict her own previous claims as she says her co-star didn’t actually “offer” her daughter drugs.

“It happened at one of our summer beach barbecues, and she didn’t offer her drugs,” she declared. “She said she put her number in Stella’s phone and wrote ‘cool mom.’ And she said, ‘There’s a lot of bad drugs out there, if you want the good stuff, text me.'”

Shannon went on to explain that she originally decided against bringing the allegation up on the show because she didn’t want it to negatively affect Stella or jeopardize the mother-of-seven’s sobriety.

“Stella is a doll and she didn’t want to be a tattletale or a snitch, so she didn’t tell me,” she explained. “Had I known that it had just happened at my party, I would have handled things completely differently, but I found out about it right before we were going to start filming. And then I’m not going to bring up that issue on camera because I don’t want to drag my daughter through it. We talked it through and resolved it and then when Braunwyn was talking about her sobriety, I’m not going to bring that up.”

The Real for Real Cuisine creator readily admits that she only brought it up at the reunion because she wanted revenge after Braunwyn claimed she had a drinking problem.

“I’ll tell you why I did, because she had the audacity to sit there at the reunion, and [Andy Cohen] went around and asked every person, ‘Do you think Shannon has a drinking problem?’ Everyone said no. And then Braunwyn, you know, the saint of all saints, knowing who an alcoholic isn’t said, ‘Yes you are.’ And you know, my response is, and you’re basing that on all the times we were drinking together,” Shannon claimed.

“When you passed out [in] my kid’s bed, I had to call [Sean Burke] and say, ‘I’m putting her in a car right now,'” she continued. “That’s where you’re basing your judgment of whether I’m an alcoholic or not. That’s damaging for me. I mean, I’m working super hard on a brand. I did let myself go during COVID and I’m not proud of it, but 2021 is the year of the glow up. And I’m going to change all of that, but don’t put a label on me as an alcoholic. Do I go out and have fun? Yes, I do,” the reality star professed.

As for Elizabeth revealing she’s a “non-practicing” bisexual at the reunion, Shannon says she definitely wasn’t expecting to hear that.