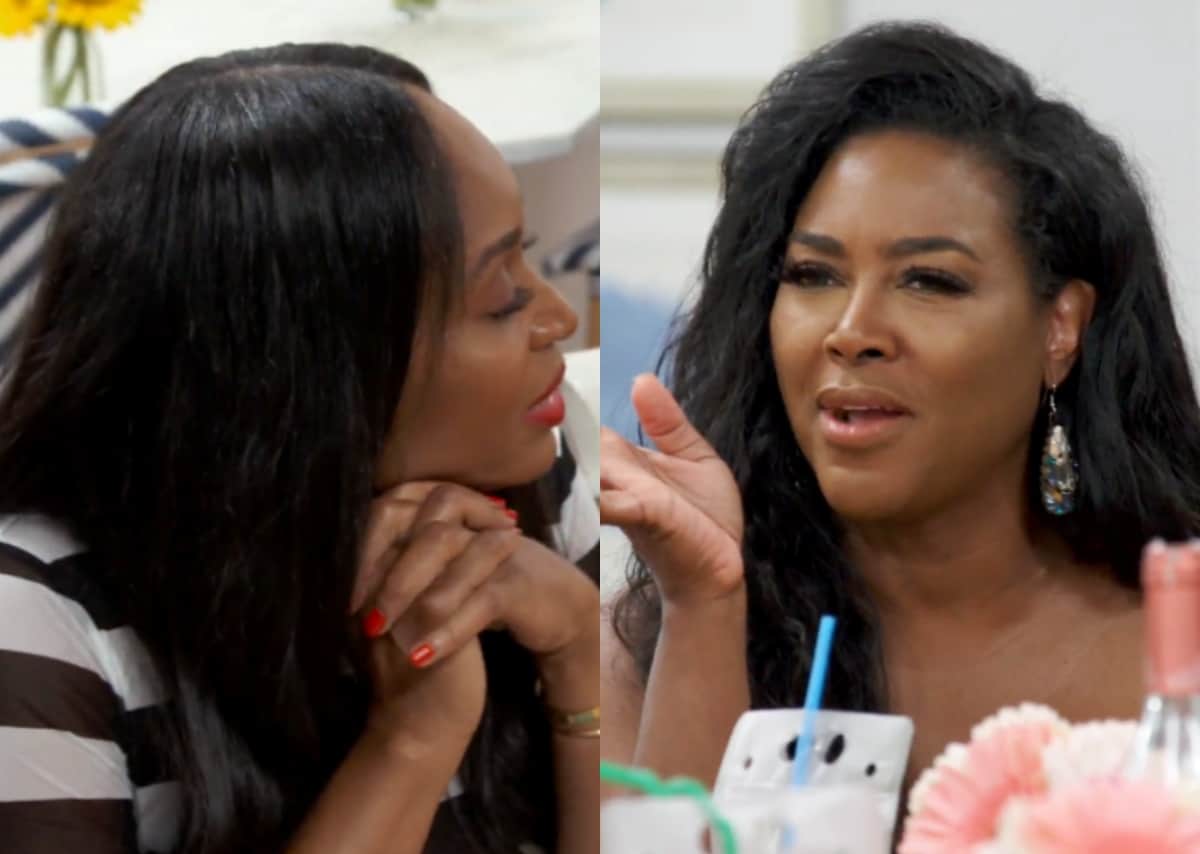 This week on the Real Housewives of Atlanta, the beach party is finally getting started. Thank you, Jesus! We have been strung along all season by Bravo and we need to get to the meat of the season. Pardon my pun! Let’s dive into this shark-infested dysfunctional beach getaway trip. Shall we?

The ladies are still fired up over not being allowed to bring their babies. Kandi defends Kenya’s choice of bringing Brooklyn. She doesn’t have a village to help her — let alone a husband. I agree but it is a self-inflicted wound. Marc isn’t able to help since he is obviously busy planning his own reality show. Isn’t that something? Now he is interested in being on TV?#famewhore

Kenya brings in a party coordinator who is assisting her in planning a murder mystery dinner. Whitney, the coordinator, explains how things are going to play out to Kenya and Latoya. Kenya makes sure that it isn’t going to be misunderstood with a bunch of cops busting into a woman’s house. Yeah — me too.

Cynthia arrives “a la boobs spilling out” and approves of her room. Damn, those things are going to fall out and roll across the floor! Cynthia is happy that Kenya took care of her since her new BFF Latoya has been taking precedence.

The rest of the ladies arrive off of the hot janky bus. The ride should have taken four hours but actually took eight hours. Bravo delayed it to further stir the pot and make their behavior messier than usual.

The alcohol is flowing and the ladies start to get their groove on. They each pick an alter ego name for the night. Then one of the female actors comes in and dies from a knife wound and is all splayed out on the floor. The murder mystery portion is beginning! A white cop runs in the room yelling and Porsha — aka Peach Juice — dives over the couch. She probably has PTSD from being arrested and was looking for a hiding place.

Drew is not feeling this ghetto murder mystery. Porsha doesn’t want to have to think and use any of her remaining brain cells. She just wants to drink and dance. Kenya offers a room upgrade to whoever solves the mystery. Now there is some motivation!

Kenya is trying to get them to focus on what is going on. Latoya wants to admit culpability so she can get the party started. They are breaking lamps and being girls gone wild. Kenya solves her own mystery but gives credit to Tanya for her thirsty efforts.

Latoya wants to ask about Drew’s “struggling husband.” Oh boy, she is going in hard already. Isn’t she? Please don’t make Drew go all “Chicago” on you, girl. She put a girl’s face into a gate for goodness’ sake. Marlo tries to diffuse the situation by telling Latoya to not start crap and slow her thirsty roll. She needs to tell her how she has been acting up for eons and still hasn’t scored a peach yet.

Kenya tells Latoya to apologize to Drew for laying her hands on her. She just can’t keep her hands to herself. The only thing Latoya wants to do is pull the wig off of Drew’s head and steal her peach!

Marlo is not finding her blue room fabulous at all. She doesn’t care she has her own bathroom and a closet. Marlo knows why Kenya is putting her in the worst room #revenge.

Porsha, Drew, Marlo, and Shamea head into the bedrooms to talk sh*t. Kandi, Kenya, and Cynthia talk to Latoya about her gangster behavior. The ranks are dividing into two camps. There are the aunties (responsible) and the nieces (reckless).

Tanya and Shamea have definitely got into the Titos. They are behaving badly to try to keep the cameras focused on them. I can only tolerate so much thirsty behavior in an episode!

Kenya thankfully talks the ladies into an early night. She brings little Brooklyn in for the night. The next morning, Kenya is cooking breakfast in the kitchen with Brooklyn. Marlo is like the walking dead rising up from the couch. She is all wrapped up in her headscarf and blankets.

Cynthia calls Mike to catch some sun before she has to deal with all of the shade. Drew calls Ralph and lets him know how Latoya was starting sh*t last night. She doesn’t know how she is going to make it for four more days. Me either!

Porsha discovers the cook roasting a whole hog. She is relieved they have dug out the butt on the hog. Porsha will not be partaking in the hog since she is vegan. I understand, Porsha, I gave up pork and beef after watching a Netflix story on the meat industries. Sorry, I digress, but you just can’t un-see it!

Marlo is getting ready in her dressing room/blue room. She is wearing a zebra bikini with a chainmail looking skullcap. Marlo asks Kandi, “Why does Kenya keep holding onto stuff with her?” Kandi thinks they need to put that nasty shade behind them and basically accept they will never be real friends. It is never going to happen…

Porsha is getting all kinds of texts from Dennis wanting to get back together. Shamea takes her phone and reads them. She wants her to take him back. Shamea grabs her phone and wants to answer him back. Oh no she didn’t! Porsha better grab that phone or the Hot Dog King will be moved into her home when she gets back from Atlanta.

Kenya strolls into the kitchen with bags of food just for herself. The ladies are scouring the kitchen looking for food and their senses alert when they smell Kenya’s food.

Tanya is chasing her down for the crab cakes. They feel like she is a shi*ty host. Agreed. Kandi isn’t happy that she isn’t sharing her crab cakes. She draws the line about her bringing good food in just for herself.

Latoya has a $50k alligator bag? What? Did I hear that right when she was carrying her stuff downstairs? Latoya pretends like she did something nice by getting Drew a new wig. She is such a sh*t stirrer.

Gosh, no wonder why they are hungry. The pig took all day to roast. Porsha is so troubled over the poor pig carcass. She is vegan and hopes he died happily and responsibly. Kandi is digging into her happy pig. Marlo is being the sanitation police trying to get everyone to sanitize.

Latoya decides to bring up Drew’s wig. She takes responsibility for shading it behind her back. Drew doesn’t want her janky wig in a bag. She does have a gift for her, though. Methinks I like the shady Drew!

Drew thinks that Latoya doesn’t like her character from The Game and that is why she doesn’t like her. She decides to shift the narrative and gives her “biggest fan” an autographed picture. Nice move, Ms. Sidora!

Marlo decides to use this moment to confront Kenya over her sad blue room. Kenya feels attacked by her and she feels justified in giving her a bad room. Marlo thinks that Kenya has a fake butt with injections. She is insistent that she is fake as hell. We think so too! Marlo decides to leave when this gets ugly.

Next week, Kenya ditches her host duties. We also get a glimpse of the dungeon-style bachelor party. We have strippers in glass enclosures. Release the strippers! Finally getting to the meat of the season, literally! Have a great week everyone!

TELL US — WHOSE SIDE ARE YOU ON DREW OR LATOYA?