Home Real Housewives of Orange County News Meghan King Edmonds Claps Back at Criticism Over Her Buss It Challenge Video, See What the Ex-RHOC Star Said After the Since Deleted Clip is Called “Awkward”

Meghan King Edmonds Claps Back at Criticism Over Her Buss It Challenge Video, See What the Ex-RHOC Star Said After the Since Deleted Clip is Called “Awkward” 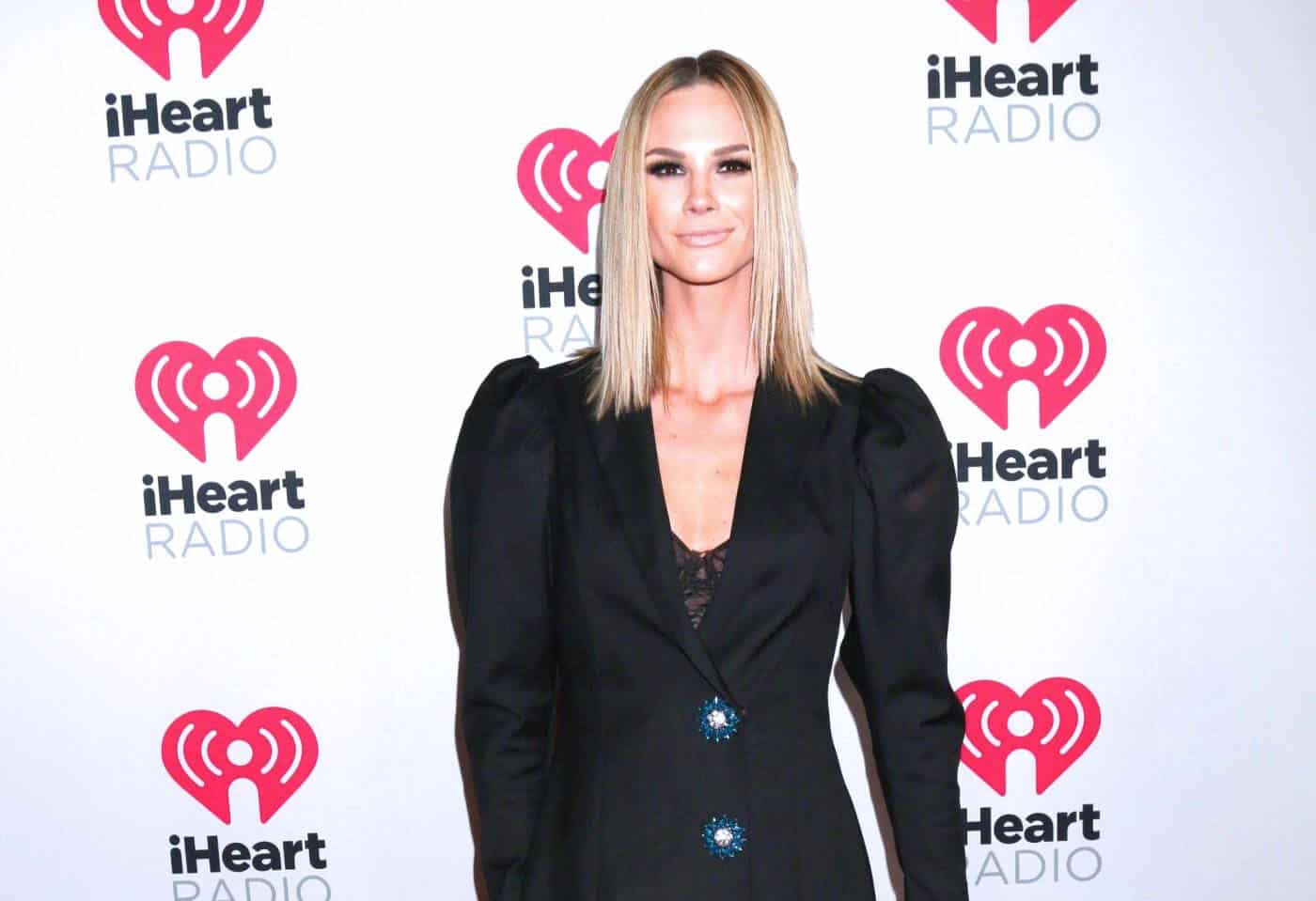 Meghan King Edmonds participated in TikTok’s viral Buss It Challenge earlier this week and faced tons of criticism for doing so.

Before deleting the video from her Instagram page, the former Real Housewives of Orange County star clapped back at several fans, one of who slammed the mother-of-three for being “awkward” and “awful” and others who took aim at her behavior as a parent.

“I don’t think my butt’s getting big, Nelly,” Meghan wrote in the caption of her February 8 post, which featured Meghan wearing a pantsuit before changing into lingerie.

Following the sharing of the racy clip, Meghan faced backlash.

“That was just awkward and awful!” one person wrote after seeing Meghan’s clip.

“Yes, please don’t do that,” another person said, adding that the ex-RHOC cast member is more of a “nature girl.”

“I’m whatever girl I want to be! I’m all the girls!” Meghan fired back. “Photo shoot today, hot yoga tomorrow, skiing [Wednesday], maybe a little dive, then a fancy Galentines party with friends.”

A third person asked, “What mom would do this??” 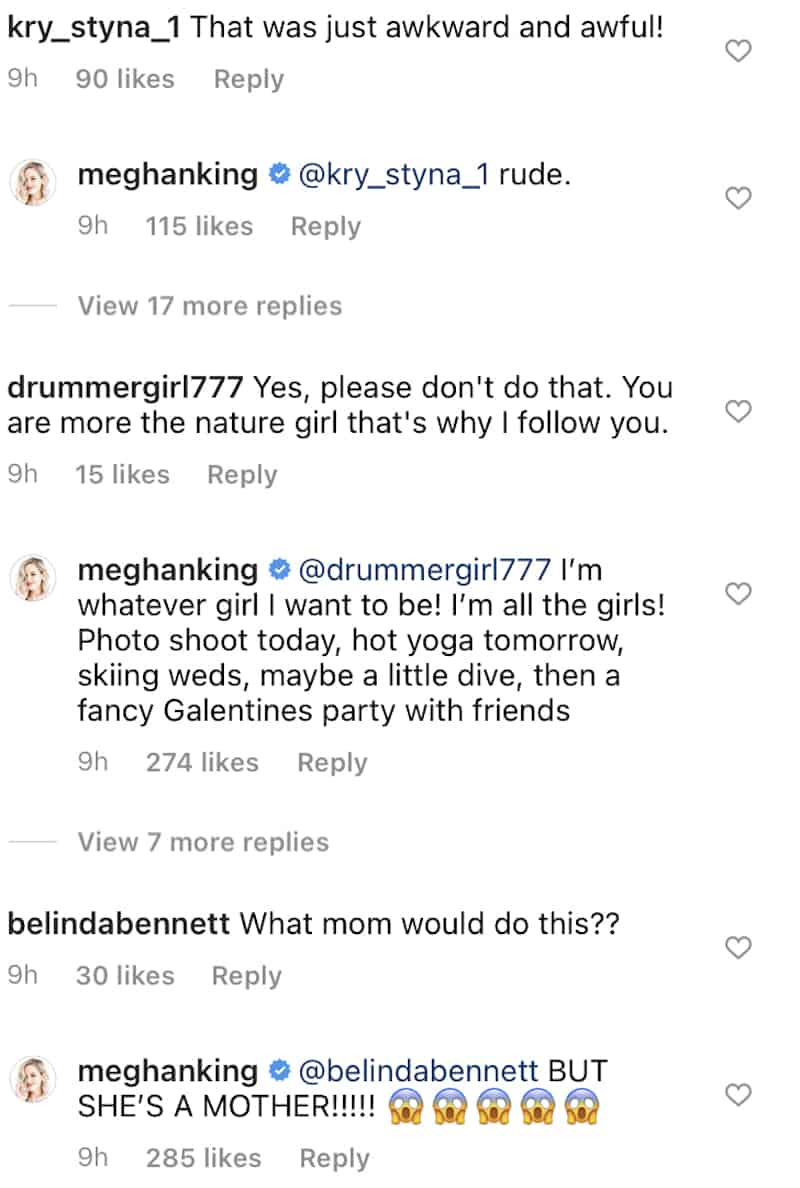 As the comments continued, one person told Meghan that her butt was”definitely not” getting big before claiming she looks “like a boy.”

Then, when someone else accused Meghan of doing “anything for attention” and suggested her “children will be embarrassed in the next few years” as she allegedly promotes anorexia, Meghan told the person that they were taking her “[one] million times more seriously” than she takes herself. 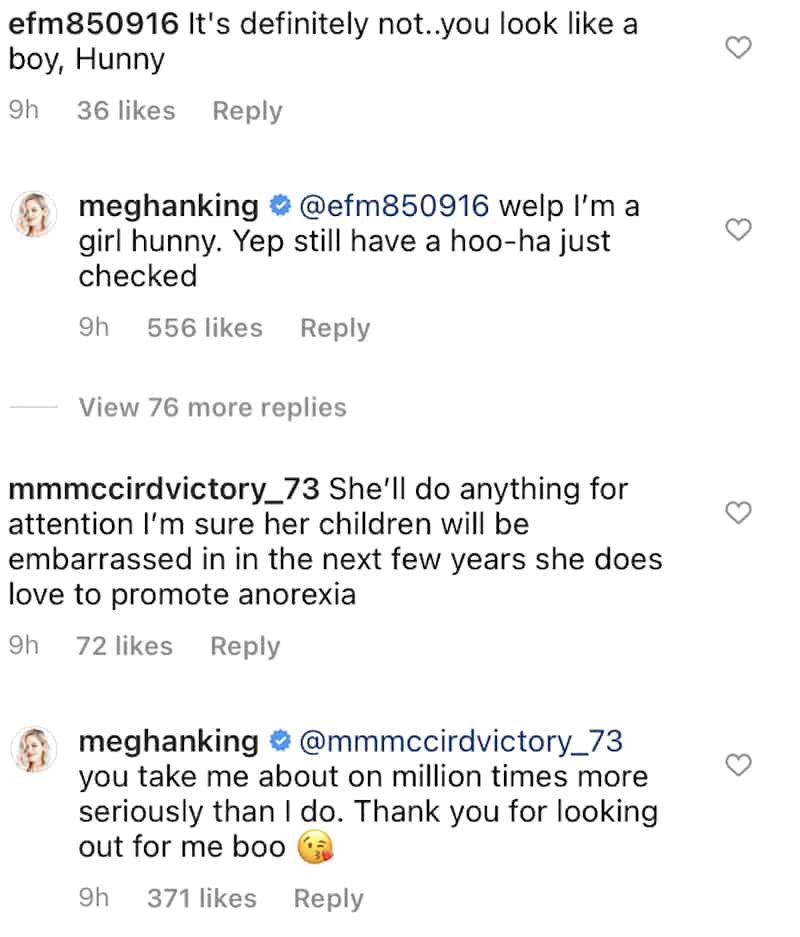 Meghan starred on The Real Housewives of Orange County alongside former husband Jim Edmonds from season 10 through season 12.