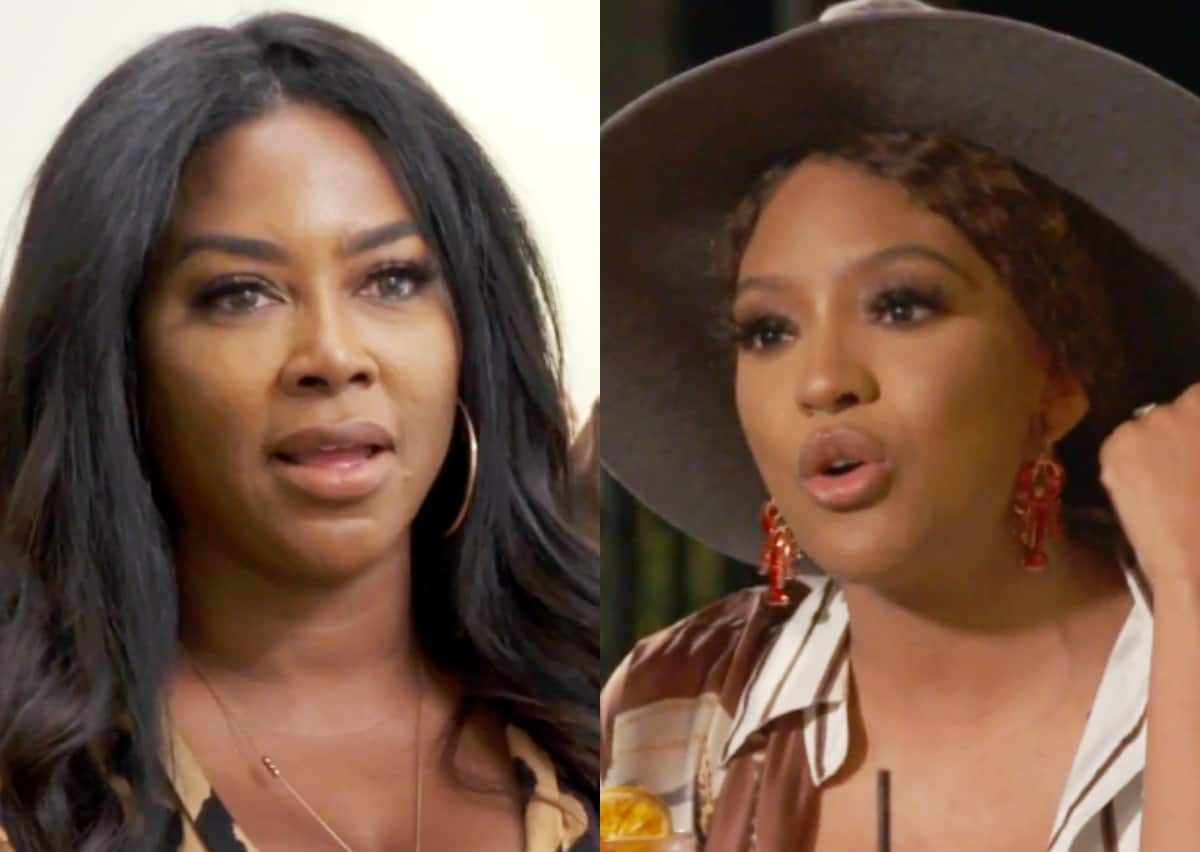 This week on the Real Housewives of Atlanta, we get down to business on what is going on with our Atlanta Peaches! Who leaked the story to the press? Let’s find out!

I must forewarn you all that this is another episode focused on Kenya Moore and stripper-gate. This season was supposed to revolve around Cynthia’s wedding, but it keeps circling back to Kenya. Let’s see how everyone reacts when the tabloids weigh in on stripper-gate!

Drew calls Cynthia, and Cyn lets her know that there is an issue getting dresses. Cynthia’s wedding is four days away. Drew is going to sing at their wedding. She is practicing by rolling her tongue to tune up that voice of hers.

Marlo has planned a harvest event at a pumpkin patch. She wants everyone to come dressed in their fall best. Let’s see what they can all pull together to match her theme.

Kenya calls her dad Ronald, and he wants to know where her little kid is. That is a weird way to address your grandchild. Kenya describes him as a little rough around the edges. She tells Ronald about Marc asking for alimony. Kenya claims he withdrew the motion 12 hours later. Marc was pissed over her filing the custody action and saw it as an ultimate betrayal. Side note: I would love to see the text exchange between Kenya and Marc.

Kenya’s dad wasn’t invited to the wedding since she thought they wouldn’t have gotten along. I am sure her dad would have had a lot to say about this tool named Marc. Ronald says his marriage has worked for 39 years since they have a foundation of good communication. He and his wife hold no animosity toward each other. Ronald has won me over since he has some really sage advice but he delivers it in an edgy way. I can now see where Kenya gets her prickly personality from.

Kenya and Drew meet up for dinner. Drew wants to clear the air since she thought the air wasn’t clear after their weekend. Kenya doesn’t like that Drew implied she was acting fake. She doesn’t appreciate her shading her over the private jet. Drew mentions the final straw being that Kenya brought her daughter and didn’t tell the other ladies. These two are just talking over each other. Drew then decides to break out into song for some bizarre reason.

Drew keeps bringing the conversation back to not being able to bring her daughter. Kenya isn’t taking responsibility for Drew’s baby not being there. She talks over her and this is literally one of the most unproductive conversations that went on for five minutes. Are they each having a monologue with each other? They can’t even decide how to settle up the bill and they pack up their meal to go. I don’t agree with Kenya that broke b*tches split a check. Kenya doesn’t have real friendships so she really can’t comment on what goes on in a normal friendship.

Cynthia has a long checklist about what is going wrong with her wedding to Mike. We have missing dresses, a lost groomsman and two bridesmaids, Mike’s ring doesn’t fit, and to top it all off, there’s a hurricane threat on 10/10/20. When even Mother Nature isn’t on your side maybe it is a sign to shut it down? This wedding will literally be gone with the wind without the fabulous.

Cynthia and her sister Mal are in the car when they get a notification about the Page Six article. There are rumors of ladies having sex with a stripper at her party. Yikes, that didn’t take long to make it to press. In her ITM, Cynthia will not spill who leaked that to the press but she knows who was the most “pressed.” HINT: Rhymes with Wenya!

Kandi arrives at Marlo’s harvest event at Sleepy Hollow Farm. I love fall-themed events and this time of year specifically. Marlo and Kandi discuss the Page Six article. Marlo accurately states that they have a leak in this camp. She would never allow this leak to happen since she always has an NDA.

I am distracted by Marlo’s bizarre getup, which includes a poncho with boots.  I also might have glimpsed some short shorts underneath it. Sorry, I digress. Kenya arrives and acts all innocent and smug. Shamea arrives and hears the cat is out of the bag about their girls’ trip. She looks a little concerned since her buddy Porsha was at the center of the drama.

LaToya arrives looking really pretty but she didn’t follow the fall-themed attire either. She struts in looking like a vixen and can’t wait to kiss up to Kenya.

In her ITM, LaToya says that she thinks Kenya leaked the story. She thinks Tanya left the country and is now on a Most Wanted sign. LaToya doesn’t want to fight off Lucifer and refuses to engage with Kenya.

Drew arrives in an awful orange faux leather dress with a Barbie doll blonde wig. She is a pretty woman but this look is most definitely not working for her. I will give Drew props for getting the color right for the fall-themed event. They call Cynthia and she is still trying to find her mom’s dress for the wedding. Cynthia has decided against the prenup and is going to do a post-nup despite the ladies’ warnings. Kandi recommends checking with Mama Joyce since she knows a few things about protecting yourself from greedy men.

The ladies participate in catapulting pumpkins at a target. They then jump on the hayride, and Kenya and Drew are still bickering with each other. Kenya thinks Drew is a weirdo since she was doing vocal exercises when she arrived at their dinner. She wanted to clear the air with her at the dinner since she felt she was coming for her in SC. We all saw how much hot air was cleared at that dinner! They might as well have sat at separate tables since there was no meaningful conservation being held.

Porsha has gotten lost in the woods trying to find the pumpkin patch. She is still over an hour away and claims her GPS is sending her all over the place. Porsha arrives in her Grease-style leather jumpsuit after Kenya has hit the road with LaToya. Kandi can’t wait it out either since she has already fulfilled her filming commitment.

Porsha gets the story about what they all were gossiping about. She thinks Kenya has her paws all over this story being leaked. Marlo isn’t happy that they don’t trust her anymore since she made nice with Kenya. Porsha thinks Kenya having a truce with Marlo was a very calculated move on her part. Me too.

Kandi, Todd, LaToya, and Don Juan are all having dinner. Isn’t this a random group pairing for dinner? Don Juan thinks that Kandi needs to stop orchestrating events where the ladies go down on each other. He might want to take into account they are at a dinner table. Kandi asks LaToya if she knew what happened with Marc. Is Kandi trying to make her question her close friendship with her gal pal Kenya? Super shady, Kandi, and I love you for it!

Porsha, Drew, and Shamea go shopping and have to continue to talk about Kenya. She will never understand nor try to connect with Kenya. Kenya is just not Porsha’s cup of sweet tea. If we could just get you to stop connecting with the hot dog vendor you would be in really good shape!

Kenya is having a therapy appointment with Dr. Kristy. She definitely needs guidance on her relationships. Kenya thinks she gives more in her relationship and doesn’t get it in return. She ends up with emotionally unavailable men who aren’t transparent. Now that is the understatement of the year!

Dr. Kristy thinks that she gives concessions for other people at the detriment to herself. Kenya shares in her ITM that she debated being a mother since she had a nonexistent relationship with her own mom. She can’t accept that her mom treated her like she was invisible. Kenya was in a relationship at 15 with a man who was 11 years older than her and who was physically abusive. She thinks it ties into her upbringing and not feeling protected.

Dr. Kristy wants her to take a breath and just exhale. Kenya HAS to remind Dr. Kristy that she was in the Waiting to Exhale movie — of course you were, and we now have another episode where it is all about you, Miss Kenya.

Next week, there is still some blowback from the girls’ trip. Porsha has a tough talk with Dennis. We finally get to Cynthia’s super-spreader wedding. Have a wonderful week, everyone!

TELL US — DO YOU THINK THAT KENYA CONTACTED THE PRESS?