Home Real Housewives of New York City News Bethenny Frankel Apologizes After Backlash for Meghan Markle Tweet, Acknowledges Her “Emotional Distress” and Experiences With “Racism” After Calling Her Out for Whining During Oprah Tell-All

Bethenny Frankel Apologizes After Backlash for Meghan Markle Tweet, Acknowledges Her “Emotional Distress” and Experiences With “Racism” After Calling Her Out for Whining During Oprah Tell-All 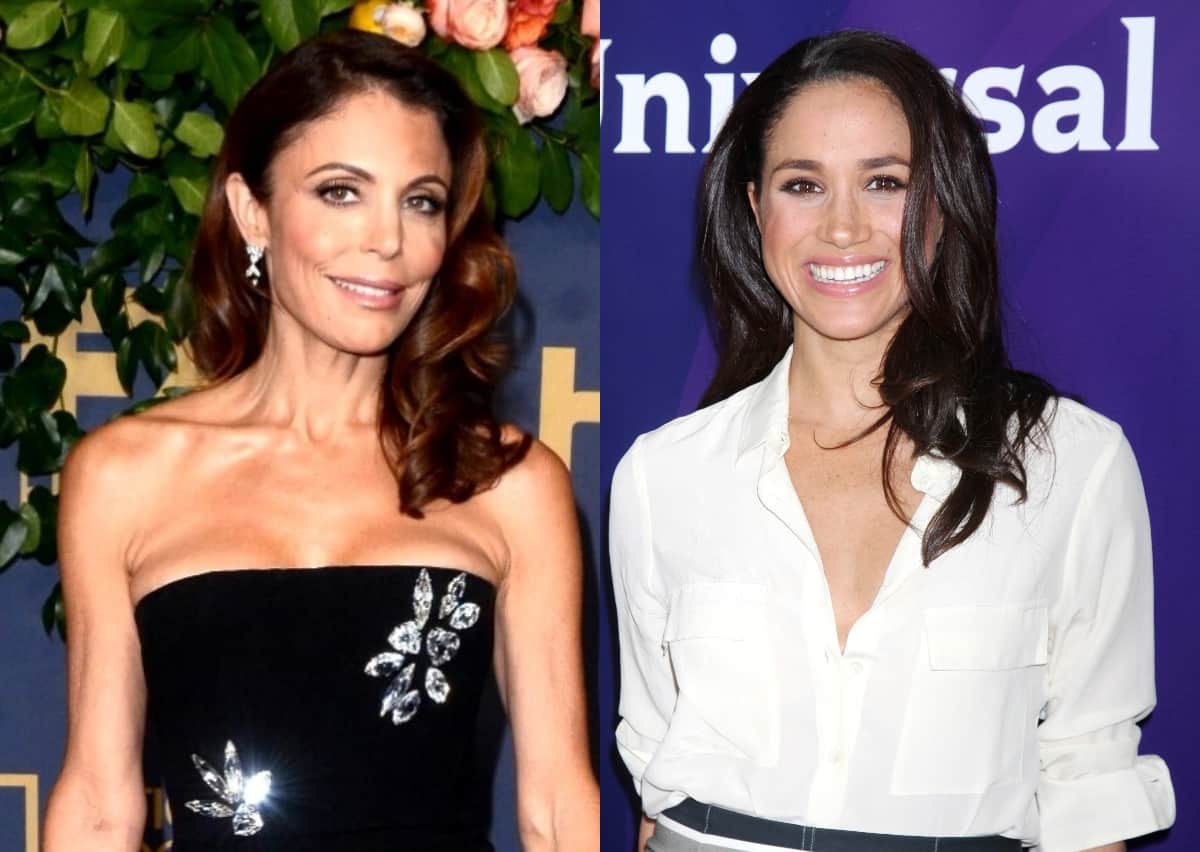 Bethenny Frankel is backtracking on comments made about Meghan Markle over the weekend.

After the former Real Housewives of New York City star was slammed for “un-empowering” women of color with a hypocritical tweet about Meghan’s complains about the racist behavior she experienced both before and after marrying Prince Harry, Bethenny shared another post on Twitter.

“I watched [the Meghan and Harry] sit down. Emotional distress [and] racism must feel suffocating [and] powerless,” she shared after tuning into Meghan and Harry’s tell-all with Oprah Winfrey on Sunday night. “I’m a polarizing, unfiltered (often to a fault) flawed person [with] a voice. When I heard of the interview, during a pandemic, it felt like a surprising choice. I’m sorry if it hurt or offended you.”

Prior to her late-night tweet, Bethenny had suggested she didn’t feel badly for Meghan at all.

“Cry me a river,” Bethenny tweeted. “The plight of being a game show host, fairly unknown actress, to suffering in a palace, [with] tiaras [and seven-figure] weddings for TWO WHOLE YEARS to being a household name [with] Oprah on speed dial, fetching [$7 million] for interviews, hundreds of millions in media deals.” 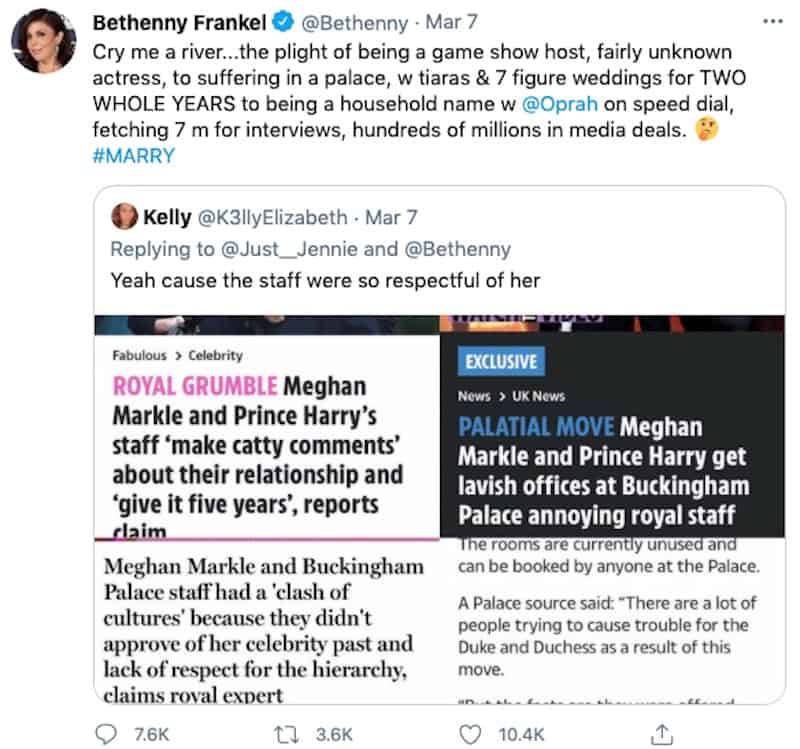 Bethenny also questioned Meghan and Harry’s intentions for their interview.

“I [100 percent] give Harry a break. This isn’t the way to generate less press [and] cannot be filed under the guise of wanting privacy to prevent a repeat of previous events,” she continued. “If you hate me for saying it here don’t listen to my podcast [Just B With Bethenny] it’s littered with my opinion.”

After the ex-RHONY star‘s tweets were shared, she faced tons of backlash from people who felt it was hypocritical for her to say due to her own past meltdowns on television.

“Hmm like the river you cried of white women tears being a mediocre reality TV star claiming to be homeless while owning [two] properties in NYC with the luxury of living in a hotel while in a limo??? Oh the plight,” one person stated.

According to Bethenny, she and Meghan are much different in that she allowed herself to go through the dark sides of fame.

“I chose reality TV, to work towards making [money], to be scrutinized [and] criticized. I took the trappings [and] the beatings along with it. It’s a rose w petals [and] thorns. People beg to enter the often toxic institution I signed up for. That WAS the life I chose. You can’t play stupid [and] smart,” Bethenny explained.

Still, many Twitter users were completely disgusted by Bethenny’s posts and felt that she was attempting to take away from the struggles of a Black woman.

“Wow! Can’t believe I’m leaving the [Bethenny] train… I once took off work drove 20 miles for a chance to be on her talk show and now I see this… Un-empowering a woman (of color no less) to get her own headlines… SMH!” another person tweeted. “Thanks [Chrishell] for bring a voice of reason.”

“Comparing yourself to a Black women who has endured so much hatred based on the color of her skin?!?! Wow Bethenny wow, you’ve hit a new low,” a third person said.

Bethenny starred on The Real Housewives of New York City for eight seasons.