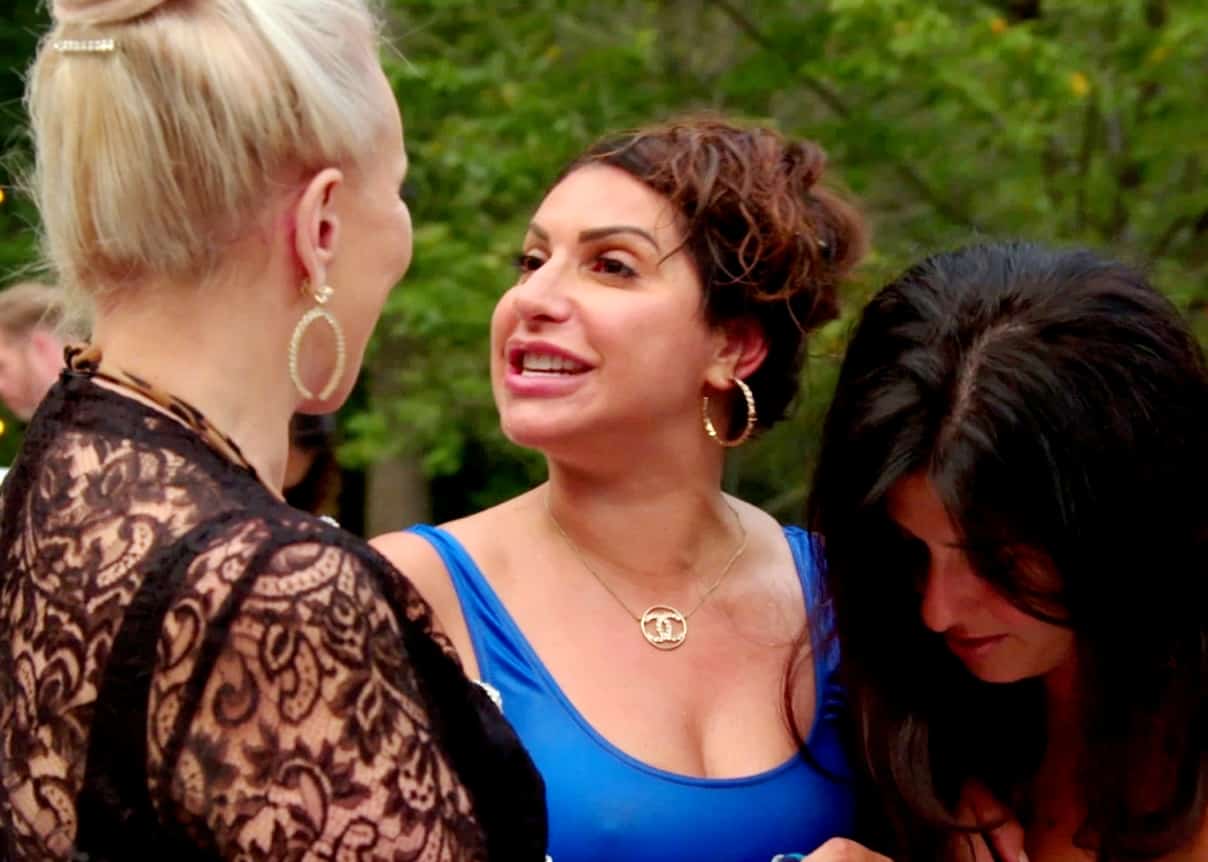 This week on The Real Housewives of New Jersey, Teresa has a fun pool party and Jennifer gets overserved! Let’s dive into this drama-filled pool!

First off, will Joe Gorga confront the rumors with Jon that Michelle is sharing with the group? Can Jackie and Teresa move on from their tiff? Let’s get started and find out, shall we?

Melissa, Joe, and the kids go to their Jersey Shore home to celebrate Joe’s birthday. The house looks beautiful and has a great ocean view. Melissa wants Joe to intervene in the Jackie/Teresa battle. She thinks he can reason with her and convince her to play nice with Jackie.

Jennifer has her sister Jill over for dinner. She definitely gets ordered around by her kids. Jill thinks Jennifer’s kids should be helping their mom more. Me too! Jennifer and Jill want their dad to go to Turkey to meet his new grandson and namesake, John. They just have to figure out a way so their mom isn’t pissed that he is going first. Jennifer’s mom can’t do anything without her kids holding her hand and will resent him more. This is most definitely a tricky situation.

Dolores arrives at the house that David built . She gets a call from her other husband Frank to chat about David, of course. You know these three are in a throuple, right? Dolores and David are going to have another uncomfortable talk about their relationship or lack thereof. David arrives on his motorcycle trying to act all cool.

Dolores asks David if it bothers him that she is renovating her own home and not staying at his. She expected an engagement when his house was done. David claims she is all over the place and he has AGAIN found another way to shift the narrative and avoid the topic at hand.

Dolores and David are doing this dance around their issues. David feels like he is throwing her a bone when he invites her over at night. Dolores wants them to make a pact to show each other they care. What? She threw away all of the keys to the house? She got frustrated with this relationship and tossed the keys.

Teresa keeps insisting that there is nothing going on with Tony. She has some obsession with pineapple, though. She is convinced it makes you taste good. Teresa insists she wants a man who is tall, dark, and handsome and wants him to kiss her peach. Joe Giudice was definitely none of those adjectives.

Melissa decides to bring up Antonia having a boyfriend. She wants to have the birds and bees talk. Okay, enough of this bullsh*t storyline. We already had to watch last season that she wanted another baby and now we are listening to this crap. Joe doesn’t want that conversation to happen. He doesn’t want his little girl to grow up. Joe loses his sh*t thinking of his daughter being touched.

Teresa announces that she is going to have a pool party. Joe wants Teresa to invite Jackie and that is a big no — for now. Teresa can’t get over the Gia analogy and wants Jackie to quit being a crybaby. She is going to now invite her as a birthday wish to Joe.

Teresa has Melissa sending the text to all of the ladies for her since you know she can spell. She wants Michelle to come too. Teresa tells them she gave Michelle an ultimatum to make nice with her brother or no listing. This is going to be messy.

Margaret’s house in the next scene is a disaster. She is planning a photo shoot in her house? Yikes! Is it going to have a chapter on the ramifications of hoarding? Emily, the ghostwriter, comes over to discuss her book. Margaret apologizes for her messy home — as she should.

They discuss her childhood and previous relationships. Margaret admits she was intimidated by powerful men and succumbed to their advances. She discusses her relationship with her ex, Jan. He was never on the same page as her. Margaret felt like he had the life experience but didn’t want her to experience it through him. Wow, Margaret looks so different in her old photos with Jan.

Margaret shares that Joe has been her healthiest relationship to date. She can be her true self and not worry about him deserting her. Margaret is concerned Joe B. might not be happy with all aspects of her book. She realizes when she shares all of her secrets it might cause trouble.

Teresa gets a call from Joe Giudice to discuss their divorce. She says they have had the easiest divorce in the world despite everyone’s concerns. Teresa shows off her bathing suit and he thinks she looks good for an old lady. Joe hasn’t changed one bit, has he?

Dolores and Frank are talking about Teresa inviting Jon to the pool party. Frank does have a point that there is a real reason for concern since Joe has a bad temper. Production has a few clips to illustrate Joey’s little tantrums.

Bill calls Jennifer and they discuss going to the pool party. Jennifer wants to let her hair down and have fun for once. She has been taking care of everyone but herself. Be careful with the tequila, Jen, and hydrate!

Teresa’s pool area for the party looks really good. Dolores arrives and Teresa has to check her new a*s out. She does look good. Teresa is wearing a thong bathing suit with an awful black macramé cover-up, and of course, her brother Joe notices. Gross.

Teresa shares with the group that Jackie isn’t accepting her invite. She wants Teresa to take that olive branch and shove it up her a*s. Well that wasn’t very nice, was it?

Teresa makes sure there is a lot of pineapple at her party. She believes they make you taste better. Dolores looks great, but what is wrong with her makeup around her eyes? She is receiving an Ambassador of Hope award for her volunteer work for breast cancer awareness. Bravo, Dolores, great cause!

Jennifer is definitely partaking in the tequila. Yikes! She keeps sidling up to the bar and taking part in the shots. Dr. Bill is coming later and she will need a designated driver after being overserved.

Michelle walks in with her husband, Jon. Joe makes a beeline for Jon to confront him about the rumors. Is this the ugly scene that Margaret is referring to recently? They awkwardly chit-chat and then Joe goes in and asks him about the money issue. Joe insists they didn’t have a 50/50 deal. Jon thinks since he sold $20k of merchandise and was the MC he should have been compensated equally. Joe says that he was just trying to ride his tiny little coattails and that should have been enough payment.

Joe is obviously backtracking on what they agreed upon. Next time, Jon needs to get a contract for goodness’ sake! Jon will consider it a miscommunication if Teresa will list her house with Michelle. Wow, that was easy to resolve and seems really contrived. Michelle will be happy that she got her listing back.

Melissa then confronts Michelle about what she said. She will only apologize for saying it at the party to Jennifer, but she wants their husbands to discuss it. What is a schmearfest, Melissa?

Joe Gorga and Frank are sitting off to the side leering at all of the ladies and sweating profusely. These two really are two brothers from another mother. Joe has to talk about what his sister is wearing and her obsession with pineapple with Frank. It just comes across as really gross to hear a brother talk about his sister like this. Frank seems incredulous hearing from Joe the Rhodes scholar that you can control what you taste like by eating certain things. I can’t even let my senses go there to think about what these two greasy creepers taste like.

Tony, the pool guy, arrives and he and Teresa get a little touchy-feely. Joe weirdly seems jealous, and he doesn’t want Tony’s paws on his sister since he is a dirty dog. It takes one to know one, Mr. Gorga. Tony gets pushed into the pool by Jon and sidles up to Teresa and Jennifer. Bill is warily watching Jennifer in the pool playing tequila pong to make sure she is not drowning. Jen has been taking way too many tequila shots and I don’t know how she is still standing. Thank God for the pool water making you buoyant!

Jennifer is now out of the pool and falling over. She is trying to drink some water and it is literally gurgling out of the side of her mouth. We now see lots of evidence from production of Jennifer drinking to excess.

Margaret gets concerned and wants to take her home. Jennifer face-plants on Teresa’s new travertine pool deck. Time to leave, Dr. Bill, wife down! Bill comes over and has to carry Jennifer to the car. She keeps giggling and telling Bill how hot he is. The two Joes run over to help him carry her to the car. Bill drives away with Jennifer making retching noises. We have all been there and it is the absolute worst. Well, an entire episode with no Jackie! Did you all miss her?

Next week, Teresa and Jackie see each other again and the word on the street is Joe B. has been sharing Evan rumors too. Be well, everyone, and see you next week!

DO YOU THINK JENNIFER’S DRINKING IS BECOMING A PROBLEM? DID YOU MISS JACKIE THIS WEEK? TELL US IN THE COMMENTS!