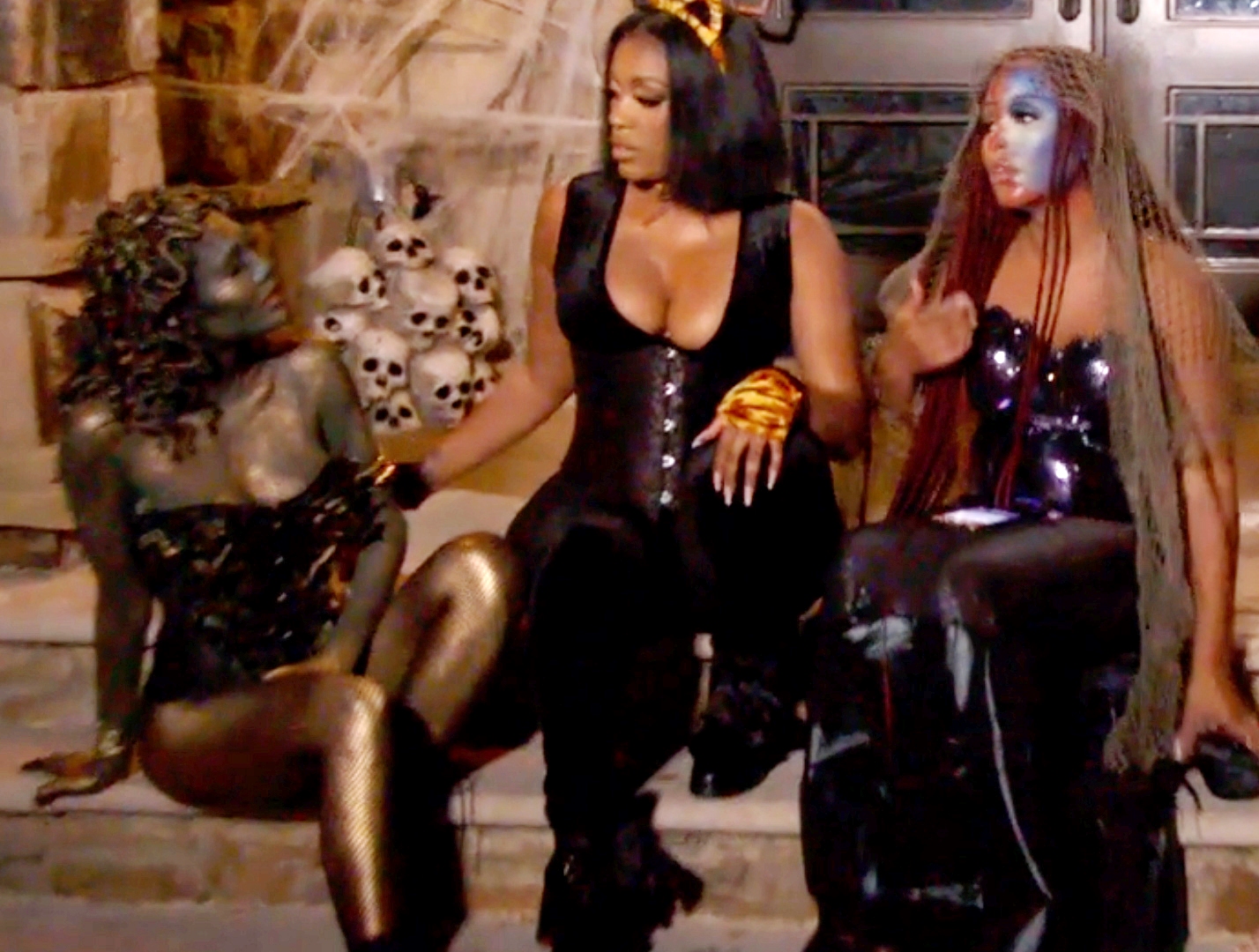 This week on the Real Housewives of Atlanta, we are going to Falynn’s Halloween party where there is sure to be danger and melee. Will our peaches be able to have a get-together without any carnage? Let’s see what they have in store for us this week, shall we?

This episode, we are heading to a scary party, and I am not talking about Cynthia’s super-spreader wedding. There must be a lot of contact tracing to be done after that wedding. Yikes!

Kenya, aka Barbie, visits Marlo’s Le’Archive showroom, and Falynn is also in attendance. Marlo wanted to open a place where she could earn some cash and rent her designer wear . Falynn invites them to her home for a Halloween party. I hope Falynn has plenty of liability insurance! Kenya doesn’t want to wear anything inappropriate. When did that ever stop her before?  She shares that it is just the ladies — no gents.  Marlo can’t make it and that is frankly disappointing since I always get a kick out of her ensembles.

Kenya and Marlo are chatting about her business. She wouldn’t like to rent her clothes to some of these ladies and their WAPS. YUCK, Kenya, did you have to go there? Kenya then pivots to talk about what she really wants to talk about. She is acting all appalled at the others’ behavior in SC. Marlo is wary to engage and is acting like she has amnesia. She tells Kenya that LaToya was sharing details with the others on her divorce. Kenya doesn’t appreciate this and feels betrayed.

Drew chats with her mom, Pastor Jeanette, about a work trip to New Orleans. She wants to invite the other ladies to join her in the Big Easy. Mama Jeanette shares how racism affected her and how she was treated. They had to stay in a pasture since they couldn’t even stay in hotels. She actually has some white ancestors. Mama Jeanette feels that when you are adopted you become part of the family and that is now your DNA.

Drew wants to know who her biological family members are. Mama Jeanette doesn’t want to find out about them and she considers her adoptive parents to be her parents. She thinks since they didn’t show any interest in finding her, why should she bother? I get her reasoning.

Kandi is trying to get her body back in shape and is working with her trainer/cousin Patrick. She got a new acting part in a movie called Envy. We can all relate to how the pandemic has affected our waistlines!

Cynthia and Mike are having breakfast and discussing their wedding. Mike thinks Cynthia had the longest wedding vows ever. He wanted the Oscars music to start playing since it went on too long. Leon, Cynthia’s ex, even left a sweet and rather sexy message for Cynthia. He proclaimed her to be a super-wife now. It really makes sense now for Mike to be married to Cynthia since he used to watch her on the show and was a Cynthia fan.

Mike, aka alpha man, wants Cynthia to consider buying a combined home. She says she is happy to live anywhere just to be with him. Sure, Cyn, you will live in a tent! Drew calls Cynthia to invite her to a real girls’ trip to New Orleans. Mike has to go back to LA for some “work stuff” so they can’t even go on a honeymoon. Is that code for “stuff” involving your female friends back in LA? Mike’s only request is that they don’t bring Bolo with them. Why can’t Cynthia have male friends, Mike?

Drew and Ralph have to discuss the situation with Josiah and his biological father. She gives all of the credit to Ralph for raising him. Drew is happy with how everything is and wants her family to remain the same. Josiah has no memory of who his dad is because he was born when his dad was in jail.

Drew doesn’t want to bring him into her life without knowing how he is living his life post-jail. Ralph doesn’t want to be in between a father and son. OMG, in Drew’s ITM, her boobs are exploding out of that peach-colored bustier-style dress. Sorry, I digress, it was distracting!

Drew and Ralph talk with Josiah about his “old daddy.” Josiah doesn’t want to have a conversation with him. He has no interest in having a relationship with him. Drew wants him to see it as a blessing that he has two dads. I give Ralph a lot of credit for being this accepting of this situation. Ralph knows how it affected him not having his dad around and wants him to give him a chance. Josiah will only commit to a maybe in the future. He is a sweet boy and this is a tough situation for a young child.

We have now arrived at Falynn’s Halloween party and it looks super creepy. The house is well decorated and looks like it would be a lot of fun. Cynthia comes in dressed as hand sanitizer and is terrified walking through the haunted house. She probably should have worn that to her germ-filled wedding. Cynthia thinks her 50 Cynt costume was the best of all time. Falynn is Medusa and Kandi comes as a spooky-looking cheetah. Shamea comes as an astronaut. I love Halloween parties like this where they go all out for the décor and costumes but NOT DURING A PANDEMIC.

Kenya comes in a Native American costume and Drew finds it really problematic. She is already shading the party that there isn’t enough turn-up for her liking. Drew comes as a character from the Broadway show Cats. Kandi is surprised by how much Kenya is involved with Marlo and is rather suspicious of their pop-up friendship.

LaToya comes strutting in as a dead mermaid, aka a dead fish. Huh, what the heck is that? She orders Falynn to get her a cocktail STAT and is already insulting the host. LaToya is obviously jealous of Falynn’s beautiful home that she has from being married to a 65/55-year-old. She expects a chef in this big old house. Falynn thinks only broke b*tches complain about a nice party.

Drew shares that after their niece’s party LaToya got super drunk. She had to get her a driver and get her home safely. Are we onto another excessive drinking storyline, Bravo?

Kenya pulls LaToya aside to discuss what is going on with them. She resents that she shared personal information with people who aren’t her friends. LaToya claims she is loyal to Kenya. She is raising her voice and Kenya doesn’t like her tone. LaToya thinks since she is Trinidadian that she can raise her voice all she wants. Kenya obviously resents that little kiss LaToya gave Porsha in Charleston. Jelly much, Kenya? Production is really pushing this bi-curious storyline this season with Kenya and LaToya.

Porsha arrives in a cat costume. She has such a tame costume compared to everyone else. Kandi is disappointed in Porsha’s boring costume and expected something stronger. Porsha is glad she just got a Party City costume since she doesn’t think this party is “a-poppin’.” She is surprised by how tone-deaf Kenya’s decision to wear that costume is. Who thought that Kenya is sensitive to any cultural norms?

Kenya is annoyed that LaToya thinks she has to defend her over some stupid tramps who f*cked a stripper. She had to defend her since they think she is a terrible person. Kenya doesn’t have to make any excuses for her behavior according to her. LaToya wants to make it up to her, and Kenya with her huge headdress is just not having it.

LaToya turns on the charm when she sees Porsha. They are acting chummy and you can see Kenya is pissed and green with envy. LaToya is leaving because she is bored. Porsha walks LaToya outside since Kenya won’t walk her out. LaToya wants to understand why Kenya is upset. Porsha is just not following what LaToya is saying. She thinks she is speaking in tongues and isn’t making any sense to her.

LaToya wants to leave since she thinks the energy was off. She is being really rude to Falynn and has really disrespected her home. LaToya yells out, “This isn’t your property, ho,” and, “Keep it in your mouth, b*tch,” and all kinds of nasty crap to Falynn. Cynthia isn’t finding this amusing at all, and the fact that she disrespected her husband in her own home is messed up.

Falynn then sprints through the kitchen while dropping her snakes. She is seeing red and wants to put a beatdown on LaToya. Falynn is going for the golf clubs so this is getting real here.  She has to be restrained by security and her husband to stop her from attacking LaToya.

This party was scary and not just because of the costumes! Can’t they have a normal party where they get toasted and just have a good time cutting up instead of brandishing weapons? LaToya left because of the bad energy, but she is the one who brought it in! There were no incident reports – this time.

Next week, the ladies head to New Orleans! Drew and LaToya are battling it out about her drinking being out of control. Why would you bring LaToya to New Orleans if she has a drinking problem, Drew? I hope everyone has a good week and be safe!

WHAT DID YOU THINK ABOUT THE HALLOWEEN PARTY? TELL US IN THE COMMENTS!