RHOA Recap: Porsha Confronts Marlo Over Her Friendship With Kenya And Drew Shares Information About LaToya’s Drinking At Dinner 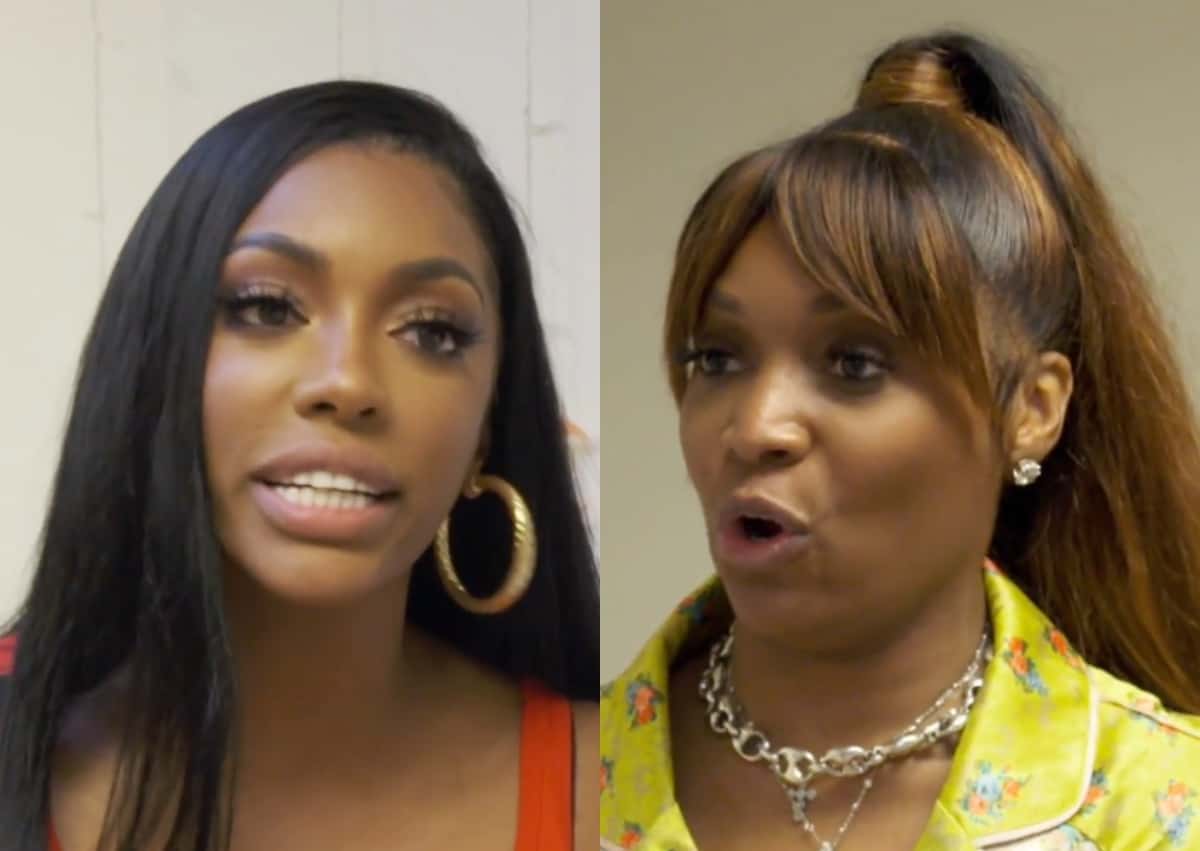 This week on the Real Housewives of Atlanta, our Georgia peaches are headed to the Big Easy, BUT during a pandemic?!? Will they all play nicely and enjoy the sights and sounds of such a fun city? Probably not, but we can always hope, right?

Last week, Kenya generated very negative buzz over her culturally insensitive Native American costume. She and Bravo eventually had to issue an official apology after viewer backlash for her costume. Bravo and Kenya’s apologies are basically hollow and were done strictly for PR reasons. We have all watched Bravo air racist material in the past and basically take no accountability. Remember our New York Countess of Etiquette’s costume?

Kandi and LaToya are discussing the trip to NO. She shades LaToya and Kenya’s hosting abilities in South Carolina. I love when she gives her little protégé crap. Ms. Kandi just wants some darn crab cakes on this girls’ trip!

Drew, Marlo, Porsha, Cynthia, Kenya, and Shamea are all traveling by private jet to New Orleans. She invited all of the ladies to bring their kids if they wanted to. Kenya is the only one who took her up on that offer. She is annoyed that she got grief over the others not being able to bring their babies before, but this time she again is the only one with a baby in tow.

Kandi is coming a little later since she is working on her movie part. Porsha is grateful for the chance to bring PJ, but this is a girls’ trip and she wants to have fun. LaToya isn’t drinking and Porsha thinks it is because she is pregnant. Hmm, is that a lead-up for another pre-scripted storyline?

Drew and LaToya had gone to church together. She is hopeful that LaToya will lay off the sauce since she acts up way too aggressively. LaToya apparently had a chat with Drew’s driver, who counseled her on her bad behavior while excessively drinking. She is supposedly considering scaling it back. Who would attempt to quit drinking while on a New Orleans trip?

We finally arrive in New Orleans! They are greeted by an awesome jazz band. Cynthia thinks Drew has nailed this gig as a host. They are staying at the Hotel Indigo. Marlo kills me when she is dancing off of the bus sporting her giant Dolce & Gabbana sunglasses.

Drew is passing out the room keys, and she gives Cynthia the best suite since she couldn’t sing at her wedding. She wants the other ladies to do their best booty bounce to score a primo room. Kenya really rudely interrupts and won’t participate in this degrading activity since she wouldn’t win. She demands her room key from Drew. Did she forget that she was totally spread-eagle rolling around the floor in SC? #hypocrite

Kenya goes into the hotel and wants to book another suite at her own expense. I guess she was too good to stay in a regular room. Kenya has already got an employee named Robert catering to her every whim. #saverobert

Drew is wearing some sort of sparkly romper to go bike riding? Don’t they know how to dress on these excursions? Shamea comes down in her sparkly face shade, which is appropriate, but with high heels? How are you supposed to ride a bike with those on?

The ladies are heading out on the bus to go bike riding through the Big Easy. Marlo has a bad back so she is going to meet up with them later. Well, that is understandable since she does spend a lot of time on her back…

Kenya tells the other ladies that she had to upgrade her room since her accommodations were vile. She knew what the deal was to get an upgraded room, but she chose to make it a big deal about herself — AGAIN.

Drew thinks that when Kenya is happy and having fun she can make their interactions tolerable. She nailed that assessment, but I could do without Kenya’s maniacal laugh. Porsha makes a hilarious comment in her ITM about how Drew accomplished something really monumental. She got all of these big a*ses on little bitty bikes! Mission accomplished, Porsha!

The guide takes them to the famous St. Louis Cathedral and Jackson Square. He tells them a little about their melting pot culture. They are now cruising down Bourbon Street and the streets are virtually empty. I guess everyone but Bravo knows there is a pandemic going on.

The ladies head to the Acme Oyster restaurant, and they are all partaking in the good NOLA food. LaToya is acting all bit*hy. Who pissed in her Cheerios this morning? I like how these ladies will try some different foods. I have never tried Boo fries but they look good. Marlo calls and she is still having some bad back pain. They are bringing her a doggy bag so she won’t miss out.

LaToya states that Falynn’s party was boring. She thinks she made it fun. Cynthia thinks she crossed a line by disrespecting her husband. Drew asks LaToya why she isn’t drinking. She responds like a snotty teenager by saying, “I don’t feel like it, b*tch.” I think when she isn’t the center of attention she has to find ways to bring the camera back on her. LaToya definitely goes for the shock factor to get screen time.

Drew confronts LaToya about when she promised that she would give up drinking. She was going to fast and detox. Drew, aka Sparkles, is trying to help her, but Kenya thinks she is bullying her by shaming her about her drinking. LaToya acts like she only acts this way around them and doesn’t go out often. She leaves and snottily says she is going to check herself into AA.

Kandi finally arrives at 12:30 a.m. She is lucky that she missed LaToya’s temper tantrum at the restaurant. Ms. Kandi did miss out on the yummy food, though.

Back at the hotel, Drew and Porsha decide to have some Patron and “kiki” a little bit. Shamea decides to join the party. She wants to talk about Marlo. Porsha thinks Kenya jumped on that faux friendship since Marlo heard a sex party was going on with Bolo. She acts like she doesn’t care that Kenya and Marlo are friends. Sure you don’t, Ms. Porsha!

Kenya comes to Cynthia’s room since she literally has no one to talk to. She is trying to spread the narrative that Drew is a bully. Kenya really wants to just check out her accommodations, though. Cynthia thinks Drew should just mind her own business since she and LaToya aren’t best buds. She is agreeing with Kenya since she doesn’t want to argue with her. Cynthia even recognizes her BFF just can’t say anything positive about Drew since she doesn’t like her.

The next morning, Drew is getting beautified by her glam squad. She is getting ready for her work callback and her interview with iHeartRadio. Drew wants her supportive friend Cynthia to accompany her. When did this friendly bond occur?

Kenya is dealing with a toddler with a crayon who has drawn all over the room. Brooklyn has been a busy little girl with her crayon. Yikes, we have all been there, haven’t we?

LaToya is pouting while wearing her “shade blocker” glasses. She is acting too cool for school. Marlo is back in the game. She must have had someone knock the back out of her!

Drew has some plans for some Zydeco line-dancing lessons. Drew and Cynthia are going to the radio station and the rest of the gang is going to do the dance lessons. They are all going to join up later.

Kenya and Marlo bond again on how they are putting poor Robert back at the hotel to work for them. Don’t they realize this poor man has a whole hotel to attend to?

Moe Joe is going to teach them twerk and bounce steps and basically to wiggle all of their junk. Kandi is struggling with the dance moves and she admits she has no rhythm. She just can’t make her butt cheeks clap and throw her a*s in a circle. LaToya does this gross thing with her tongue sticking out when she is twerking. There are body parts moving and shaking and I can’t really tell what is real and fake.

Porsha decides to have a chat with Marlo over their relationship in this healing twerk space. She wants to banish the fake-out of their friendship and satisfy production’s influence for more fluff to film. Porsha is upset that she didn’t know about the showroom opening and Kenya did. Marlo thinks their relationship changed since she is buddies with the enemy. She does want to know if there is any truth in what Kenya has been saying. I swear I heard brakes screeching in Porsha’s head when that question was posed to her!

Porsha thinks a friend wouldn’t even ask that question. Marlo is annoyed that she used to be a trusted friend and now she is on Kenya’s very lonely island. Miss Marlo, that is what happens when you side with the devil!

On the bus, Kenya and Shamea disagree over her loyalty to Porsha. She thinks her loyalty makes her a lap dog. Kenya resents that Shamea won’t spill the tea on what her friend did in SC. Marlo won’t spill what she and Porsha discussed, but with the right amount of alcohol ingested she will share the contents of that talk.

Next week, our ladies are still in New Orleans and there is a hurricane brewing. We also meet Big Freedia, aka the bounce queen, and Zeta knocks the lights out! All I can say is hunker down, and I’ll see you all next week for Zeta’s landfall in NO!