RHOA Recap: Porsha And Kenya Feud Over Bolo Rumor, Porsha Leaves NOLA Trip Early, And Did Marlo Put Herself In The Middle Of Kenya & Porsha’s Drama? 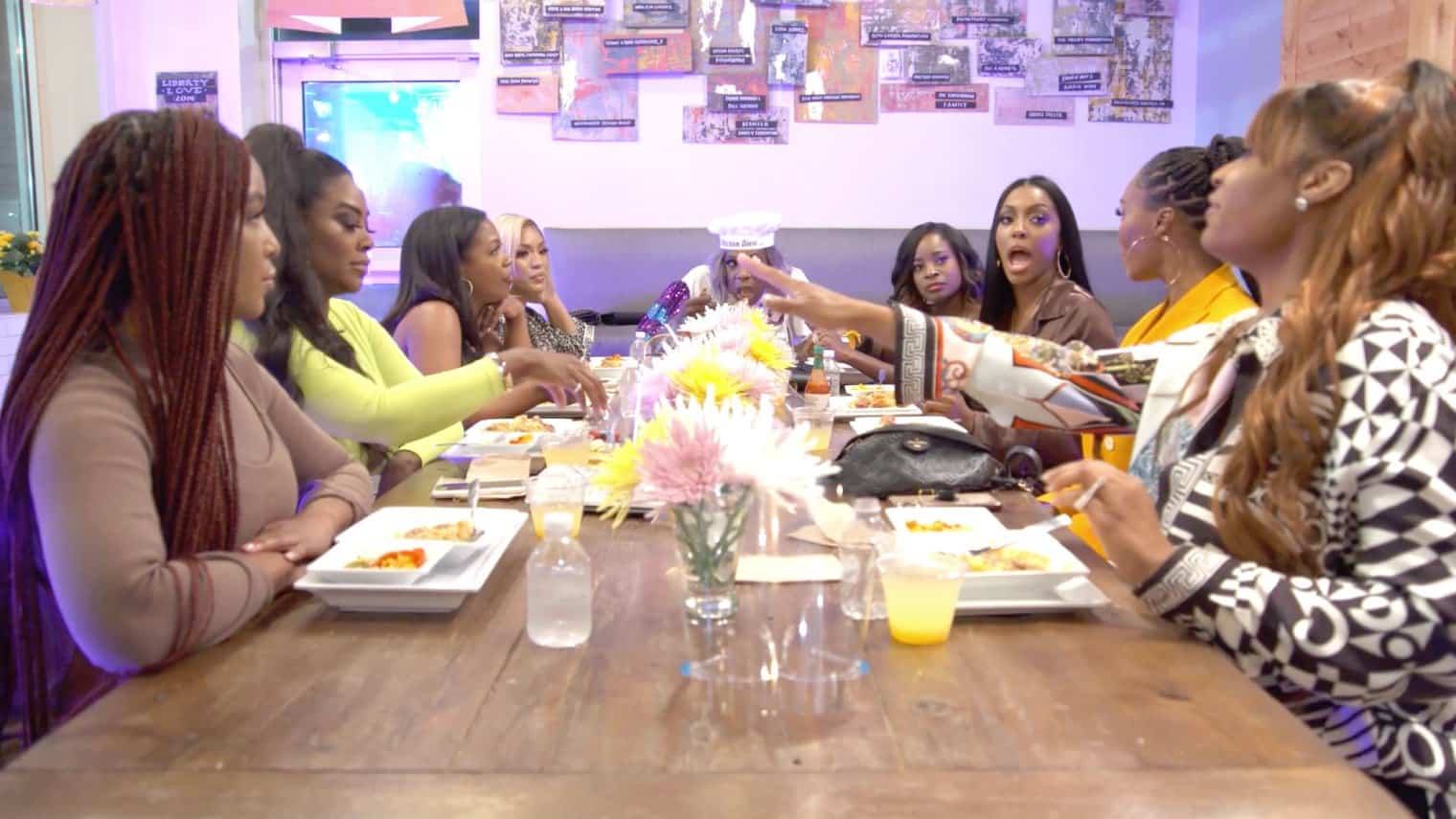 This week on the Real Housewives of Atlanta, we are back in the Big Easy with our Georgia peaches. There is a storm on the horizon and an undercurrent of angry women with hurt feelings. How will these ladies ride out the storm and survive their inner conflicts?

The ladies all meet up with Drew and Cynthia for dinner. Hold up, they need to slap on an apron and cook their dinner? Crisis averted, they are game now because Big Freedia, aka Kitchen Diva, is going to teach them how to cook while they’re booty bouncing and poppin’. Drew has a hookup through her cousin who is Big Freedia’s makeup artist. I am really getting hungry watching this meal get prepared.

Drew is tasked with squeezing the lemon. She is juicing up her drink while some sexy tunes are playing. Who knew just juicing a lemon could be made to look so provocative?

Big Freedia wants their a*ses everywhere. Shake, wiggle, and rock! Big Freedia gets them to shout out her mantra, “You already know!”

Marlo gets questioned by Kandi initially about Porsha while Kenya is listening. She shares that Porsha is telling Marlo to take baby steps with Kenya. Kandi doesn’t understand why they are fighting over a friendship with Porsha. She wants them to back off and get out of this triangle of dysfunctional friendships. Marlo then slyly questions Kandi to see if she heard Porsha screwed Bolo. Kandi doesn’t think she needs to share it and still has got that vault on lockdown.

Kenya refuses to be called the villain. She thinks there are issues since Porsha is being deceptive and that is the reason the relationships are rocky. Kenya resents that the other ladies are turning a blind eye to what they all saw and heard. She refuses to acknowledge that she is really trying to shove Porsha’s nose into that steamy mess of what was going on in that bedroom.

Marlo thinks since Porsha is remaining silent, she is coming across as guilty. She asks Big Freedia a hypothetical question about a friend being truthful and a new friendship with their former adversary. Big Freedia doesn’t like confrontation, and she suggests walking away from the situation and not engaging. She makes a GREAT point — if this a real friend that you had such a contemptuous past with, why stick with it?

Porsha wants to know why Marlo is bringing this up now when they talked it out. Kandi tries to shut it down and thinks Marlo should step aside. Kenya doesn’t want to go over this again. She tells Marlo that she is going off script she is being messy bringing Big Freedia into this. Marlo tells Porsha and Kenya that they both have been bashing each other to her. Marlo has finally had enough and bids everyone a not very fond farewell. She tries to leave but just can’t get out the door.

Kandi thinks they shouldn’t be acting like fools in front of Big Freedia. Drew wishes they could have put their differences aside and just enjoyed the moment. Big Freedia is just lost trying to untangle this mess of battered and broken relationships. She recommends being classy ladies and to just live your best life! Sage advice!

Drew thinks that Marlo doesn’t want to lose her friendship with Kenya. She is absolutely correct. Marlo would rather have Kenya on her side than have her keep popping up at her events with a marching band.

Kenya starts saying Porsha’s name, and she doesn’t want her to use her name. She doesn’t want to let it go until Porsha admits she slept with Bolo. Porsha just decides to go all out and admit to screwing everyone in SC, even the BBQ guy. Porsha and Kenya then just resort to calling each other b*tches and frauds and fakes.

Porsha thinks that Kenya is trying to provoke her, but she isn’t reacting like she did in the past. Kenya thinks if SHE slept with the stripper she would have been dragged about it. She resents that Porsha is held harmless. Kenya is correct that if the shoe was on the other foot she would have been called out on the carpet. Kandi just wants to have a resolution and it doesn’t appear that they are going to budge on that one.

Later, Kandi wants to have a private chat with Marlo. She wants to understand why she is inserting herself into this mess. Marlo thinks her friendship with Kenya has put her in the middle. DING, DING, DING! Do you think so? Marlo wants to hear the truth about what really happened so she can get the accurate dimensions on Bolo’s package. Kandi thinks that since it wasn’t her pus*y she shouldn’t worry about it. She does have to admit that sometimes Porsha hasn’t been honest in the past.

Weather alert: We now a 40% chance of a Tropical Storm. Yikes, they will be stuck in a hotel with no power. How will they eat and have ice for their cocktails? Those are always my concerns when we have a hurricane warning!

LaToya tells Kenya that Porsha has already hit the road. Porsha really should hit the road since there is a giant storm coming in, and Kenya is like a dog with a bone. She did forget poor Shamea, and how will she hold up without her BFF?  Kandi also hit the road since she wants to beat the storm and needs to be back in Atlanta.

In Cynthia’s room, Kenya and Marlo (who forgot her pants) are all talking about what happened last night. Kenya thinks that Marlo calling them all fake bi*ches sent Porsha hightailing it back to Atlanta. Marlo shares that she and Porsha talked and they didn’t really have any resolution. Kenya says she is now done with this. Can you all say HALLELUJAH! They call Drew to find out about dinner and they have to head to her room to get food. We now have thunder rumbling and power going out.

When Cynthia and Kenya come back, Marlo is trying to get to the door to answer it, but she is falling all over stuff. We now have one million people out of power in the state of Louisiana. Cynthia thinks bad weather is just following her. Miss Cynthia, you should have taken that as a sign! Kenya proclaims Drew’s trip is a big loser and claims victory for her great hosting abilities in South Carolina.

Kandi is on the set of Envy, and she meets Clinton Powell. He advises her to have consistency and focus on the role. Kandi seems to be really enjoying this part of her career more so than this housewife job. Do you all think she has been kind of phoning it in for a while now?

Cynthia is watching the news and Biden is being announced as the President-Elect. She thanks Jesus for getting people to vote. Porsha comes over to celebrate and is thrilled that Georgia is turning blue. She thinks that Black people came out big time. Porsha thinks they voted like their life depended on it. She gives credit to Stacy Abrams for leading the charge.

Cynthia wants to use her platform to promote Black-owned pop-up businesses. She wants Porsha to help her film the Instagram video to encourage support, which ends up taking 19 takes. Cynthia wants to know why Porsha ditched them in New Orleans. Porsha didn’t want to participate in that mess. She was discouraged that Marlo wasn’t being a friend to her. Cynthia is bothered that Big Freedia was a witness to this b*tch fight. They all should be since that should have been a really fun dinner and was such a wasted opportunity.

Porsha is tired of hurt people hurting her. She doesn’t want to be the target of their anger. Porsha might want to revamp her friend circle then.

Kandi calls Cynthia and Porsha to invite them to her new restaurant, Blaze, for a tasting. They will show up for Kandi and be supportive friends.

Todd and Kandi arrive at Blaze Steak and Seafood. The décor looks really good — other than Todd almost burning his hair off his knuckles trying to light the fire pits. He might want to let the professionals do that job. Drew and Ralph join them and are impressed by how they could open up during these circumstances. Todd said it was really difficult to try to open a new restaurant during COVID but they had a lease to pay. Cynthia and Porsha arrive dressed all in black to represent for Black-owned businesses.

Shamea, Kenya, and Marlo join the group. The awkward meter is going off big time with Porsha when Kenya strolls in. She is pissed that she was portrayed as a Samuel L. Jackson motherf*cker.  We now have a to-be-continued.

Next week, Marlo gets called out on her plastic surgery. Did she really get liposuction and not have a bad back in New Orleans? Drew and LaToya are STILL battling it out for the remaining peach. The reunion is sounding like it will be off the chain, BUT most of the outfits are questionable at best. I hope everyone has a great week, and be well!

TELL US — DO YOU EVEN CARE TO KNOW IF PORSHA SLEPT WITH BOLO AT THIS POINT? THOUGHTS ON THE LATEST RHOA EPISODE?