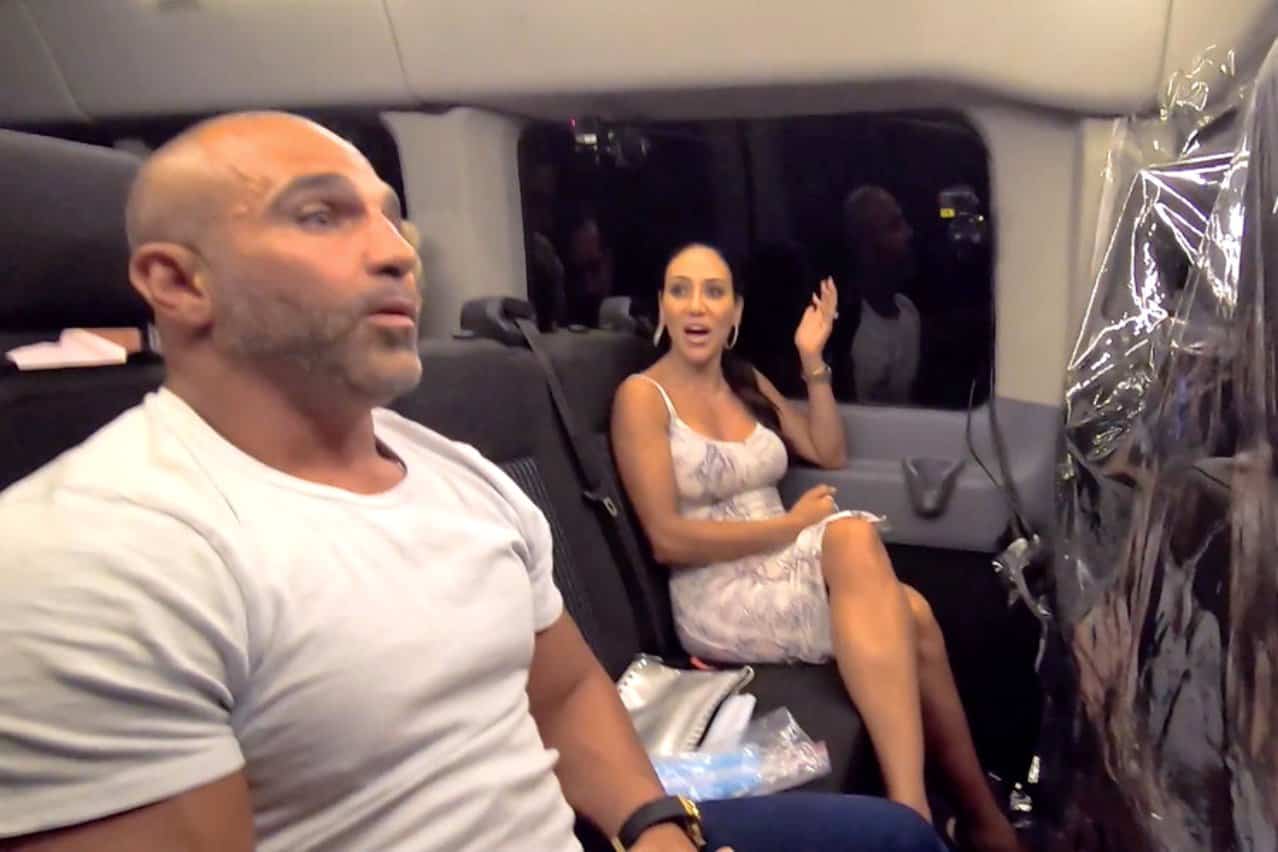 This week on The Real Housewives of New Jersey, this episode is rather bittersweet. We still have the aftershocks of the argument between Marge and Jennifer. Teresa and Joe have a heartfelt celebration of life for their dad. Let’s go through a wave of altering emotions while on the Jersey Shore, shall we?

Melissa and Joe are concerned about Margaret and Jennifer imploding at dinner. How cute was that scene where Bill is putting Jen’s shoes on for her? Just when I thought I couldn’t love Bill more, he makes me swoon with his sweet gestures. I go through a whole range of emotions and end on total horror when I see Marge Sr. just got a laser treatment on her face. YIKES. Bravo, stop scaring the crap out of me!

Margaret doesn’t want to deal with Jennifer, who has diarrhea of the mouth. Maybe she can put some Pepto-Bismol in her cocktail at dinner? Crisis adverted!

Teresa (sans her underwear), Dolores, and Frank are heading out as well to meet everyone for dinner. Bill, Joe B., Evan, and Joe Gorga eat at a separate table. Now that is a wise move and they will probably have a much better time.

I have to say, this group knows how to order good food, but there is always one who doesn’t eat. Bet you can’t guess who! They also order some yummy cocktails. Teresa has to call calamari octo-pussy. Would someone please find her a Tinder date STAT — she is open for business with no panties on!

Teresa is reflecting on the memorial they are having for her dad. She is troubled by what transpired the night before. Teresa is trying to respect what her dad wanted, which is family unity.

Joe Gorga is bringing up the prank about Melissa chatting with some random guy. Teresa thinks since Joe is still talking about it there must be some issues. She thinks since he hasn’t shared what is going on in their house that something is up.

They all decide to give Teresa some dating advice. Dolores advises her to pay attention to red flags. I am sorry — I just tuned her out with her meaningless advice. Jennifer suggests not letting them curse at you. She is directing that at Marge, of course.

Joe Gorga tries to shame Joe B. for letting Marge rule the House of Disrepair. He tells Joe B. that he wears the G-string and she wears the pants. Joe should be shaming him for not fixing it up and calling “1-800-Got-Junk” to get rid of all of that useless crap in their house.

Jennifer and Margaret go at it and discuss the whole meal ticket comment. She thinks Margaret is belittling stay-at-home moms. In her ITM, Jackie agrees that it is much harder work staying home with your kids. Margaret is upset that Jennifer took her story about her boss and basically slut-shamed her. Jennifer thinks she was sexing it up, and Marge thinks Jen has a perception problem.

Melissa thinks what they share in girl code should stay there. Jennifer thinks when you share something in your book it is free game and open to perception. Point for Jennifer.

Joe G. starts throwing a tantrum when Melissa gets in the van without him. He is pissed that she walked ahead of him. How dare she do something so disrespectful! Joe is resentful that she isn’t at home every day at his beck and call. Melissa thinks he is really high maintenance and she has kissed his a*s for years.

Melissa has to go to fashion week and has responsibilities with Envy. She isn’t going to give up her career to placate him. Joe jumps out of the van and walks away from her. He should just have a full-blown tantrum rolling around in the grass while he is at it.

Side note: I think Dolores may have been overserved. She looks like she is passed out in the van. Someone needs to adjust her dress since her boob is almost falling out.

The guys are chatting with Joe Gorga and trying to quell his little itty-bitty feelings. Joe thinks that since they have so much success it has changed his marriage with Melissa. He used to think they were like his parents and that was a marriage to emulate. Joe thinks their success has brought the devil into their home.

Melissa is talking with Marge and Jackie upstairs, and she used to find Joe’s controlling behavior attractive. She has grown up and doesn’t want to be his little b*tch anymore. Melissa thought Joe always being at her side kept him from cheating and showed his loyalty to her. She didn’t want a replay of her parents’ marriage where her dad’s cheating was legendary.

Joe comes upstairs and restarts the disagreement with her. He wants what his parents had. Joe wants to table this disagreement since they are having Nono’s memorial the next day. Side note: It is interesting that Joe Giudice is now even weighing in on their marriage. Is he getting money Zelled to him from Bravo? Joe is basically calling into the show and the tabloids this season as a housewife.

Margaret asks Melissa about the argument with Joe the night before. She thinks Joe needs to grow up from the caveman mentality of marriage. Joe Gorga thinks they are having issues since they have been married 16 years and they have hit a bump.

Margaret asks Melissa about breakfast. Melissa mentions a good donut place, and that sounds like a good plan. Does Melissa realize that Jackie is never going to eat a donut? Melissa wants to make nice with her husband, but she is going to table their disagreement for now. The Gorga kids arrive with their au pair. Hmm, when did that happen?

Dolores asks Frank, 1/3 of her throuple, about what he made her for breakfast. He does something that is totally unforgivable. Frank wants HER to get him a bagel that is totally scooped out. How dare he disrespect the best part of a bagel!

Teresa needs to get laid since she keeps making fruity sexual innuendos. She is hoping her lemons on her shirt will be sucked. Teresa might get some action since her white short-shorts leave NOTHING to the imagination.

We now have everyone getting ready to go out on Frank’s boat to grab lunch. It is such a process getting this crew out of the house. Melissa hangs onto Joe while he is driving the boat, and he has to announce to everyone they had sex before. I swear he is such a blowhard and I don’t find it endearing at all.

We find out that Evan speaks multiple languages. Dolores suggests he learned other languages from his other conquests. Maybe at the gym, perhaps?

Teresa asks Melissa what is wrong, and she tells her that Joe feels he doesn’t get enough attention. She says to pay more attention to him since he needs it. Teresa can relate since she needs to be the center of attention too. She admits Joe G. never gave her the coddling that she needed.

Jackie is chatting with Teresa and discussing Melissa. When did these two learn to have a rational conversation with each other? Frank and Joe Gorga suspiciously walk away from the table. They are allegedly going to talk to someone who does Sheriff sales. Joe Gorga’s phone is ringing off the hook. Melissa checks the caller ID and asks, “Who is Realtor Gizelle?”

Is that Frank Catania calling him from across the table? He looks tomato-red and sweatier than normal. Melissa thinks they are punking her and she is correct. She knows there is no other woman who is going to steal Joe from her. Joe programmed his phone to show Frank’s number as Realtor Gizelle. Melissa states that you can’t play a player. Joe is happy that Melissa called the person back and she still has that fire for him.

The caterers and the florist are setting up for Nono’s Celebration of Life. They have put together a beautiful photo display on a flower wall to honor their beloved patriarch Nono.

Teresa has everyone dressing in white for the celebration. Why is Teresa wearing a dress with a train? Why do they need a glam squad to doll them up for Nono’s celebration? It is not about you!

Gia, Gabriella, Milania, and Audriana arrive looking beautiful. The Gorga and Giudice family all take a beautiful family photo. The Giudice girls have all grown up and I can’t get over how much Milania has changed.

Teresa and Joe reflect on what an amazing dad Nono was. Gia starts reading the speech that she read at the funeral. She does a beautiful job describing what he meant to her. Gia has really grown up to be a lovely girl. She did a superb job honoring her grandpa. In her ITM, Teresa reflects on what her dad meant to her. She saw him as her best friend and he was the glue keeping their family together. Teresa said she got her shopping gene from her dad. Now that is not good.

Joe Gorga is going to try and fulfill his dad’s wishes and take care of Teresa. They toast to Nono, their hero, and toss flower petals into the Jersey Shore. Honoring those who were the fabric of their family was a refreshingly nice way to end this show.

Next week, Teresa sees a medium, and it is foreseen that love is in the air for her. Dolores is sobbing so she must have gotten the news AGAIN that David is just not that into her. Be well, everyone, and I will see you all next week!

WHAT DO YOU THINK OF JOE GIUDICE WEIGHING IN ON EVERYTHING THIS SEASON? TELL US IN THE COMMENTS!