Home Real Housewives of Atlanta News RHOA Recap: Drew Accuses LaToya of Having an Inappropriate Relationship With Prophet Lott, Did Marlo Get Liposuction Before NOLA Trip? 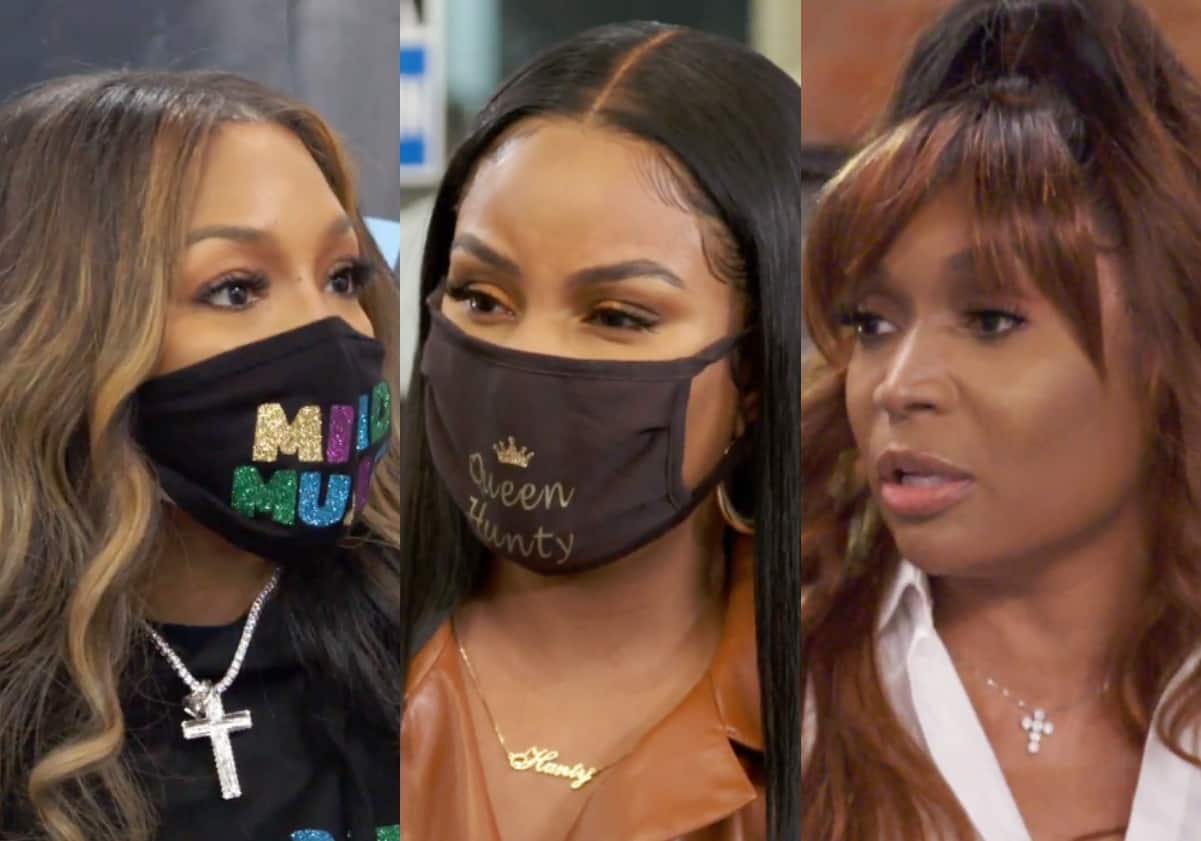 This week on the Real Housewives of Atlanta, Drew accuses LaToya of fooling around with her Prophet. Marlo is being accused of getting some “sucks,” and Kenya is getting her girls lifted and tucked. Let’s see what kind of ungodly behavior these ladies are up to this week, shall we?

We are back at Kandi’s restaurant tasting for Blaze. Kandi, thankfully, breaks the ice and thanks everyone for coming to celebrate her restaurant. That was a wise move, Miss Kandi. Move this awkward meter in another direction.

Marlo decides to apologize to Porsha, who is just pursing her lips in anticipation of some sort of slight. She shares that she apologized to the other ladies, but Porsha hit the road so she missed the apology tour.

Kenya pulls Kandi aside to tell her Marc is in town for Brooklyn’s birthday. She doesn’t know where he is staying and her nerves are frazzled. Kandi asks Kenya, “Why don’t you just file for divorce?” Kenya doesn’t think she has done enough to save her marriage. She isn’t ready to pull the plug on her already sinking ship of a disastrous relationship.

Kandi would like her to cut the lifelines. Kenya basically wants to leave so she can deal with where Marc is going to sleep. She does mention there is a custody hearing as well so that could explain his presence too.

Wow, some of the food coming out of the kitchen is making me hungry. The fried lobster jambalaya, crab claws, and macaroni and cheese look yummy. They all comment that the food is good, and even the ladies of OLG give their seal of approval. It is funny when Kandi mentions that it is supposed to be only a tasting not a fulfilling. Kandi should already know that this group likes to eat!

Marlo gets questioned about her liposuction and her bad back. She is sticking to her story that her nephew jumped on her back. Shamea is trying to pin Marlo down since the streets were talking and she heard she visited the doctor. She is insinuating that she got lipo done before New Orleans.

Porsha is loving that Marlo is getting called out. She resents that she is blaming her pain from sucking her “lying fat” out of her body on her nephews. Porsha thinks she is the definition of fake and she needs to acknowledge that her story AND her stomach have holes.

In her ITM, Marlo shares that she knows that Porsha f*cked Bolo all night long. She got her intel from Kandi as production shares a hot mic moment. Marlo acts like she is concerned for Porsha’s sanctity and needs a savior. Porsha asserts that she sleeps just fine in her “Pampered Porsha” sheets dreaming of hot dogs.

Kenya calls her doctor, who is ironically called Dr. Deal. She shows him on camera that she needs her boobs realigned and lifted. Wow, those suckers are huge. Something needs to be done to deflate them!

Cynthia and Mike are weighing themselves, and they think their weight is some bullsh*t. They are 195 and 236 respectively. We can all relate to this scene when we realize how badly we overdid it during COVID. I like thinking that way when you don’t agree with some reading — maybe the scale is just broken.

Drew, with her stinky feet, and Ralph are working out. She is still hurting over her bad foot. Drew has Prophet Lott doing her baby’s blessing. Prophet Lott is apparently spiritually advising LaToya, and he is having dinner and breakfast with her — in that order. Drew doesn’t want anyone blessing her baby who is engaging in an inappropriate relationship with LaToya. Side note: I love when they do LaToya’s drunken slurred down saying of, “Girls just want to have fun.”

Ralph thinks LaToya is trying to find God, and the Prophet is allegedly helping her find him under the sheets. Little Aniya comes into the scene, and she is just precious. Keep that Prophet away from that cute baby, and why not let Drew’s mom do it?

Cynthia is having her Black-owned business pop-up shop event. She wants to use her platform to help Black-owned businesses to get back on their feet. I really like this idea to shop all of the different brands in one place. Porsha arrives in a blinged-out mask and a purple fur coat, which I hope is fake. Marlo arrives and tries to make nice by buying Porsha’s king-sized sheets. She even buys some edges from Kenya’s line.

Drew shares with Kandi the un-holy drama going on between Prophet Lott and LaToya. She tells Kandi that LaToya didn’t come to Blaze’s tasting because she didn’t want to face Drew. Kandi just can’t get on board with this story that LaToya is blocking her blessing. Me either.

Drew reminds Cynthia that LaToya met someone from Texas. Guess who else is from Texas as well? Drew hears that LaToya has sauntered in and Drew is all, “girl-bye.”

LaToya and Kandi are chatting, and Kandi asks about her new boyfriend. She, not so innocently, says it was a six-week life coaching program with the Prophet and nothing more. Drew says LaToya didn’t show up for Blaze since she was upset that the news got out that she was canoodling with the prophet. LaToya thinks that Drew is a drama queen. She will not entertain her. Drew wants her to know there are people that are being affected.

Drew wants LaToya to be honest. She wants her to be real about the fact that she is seeing a man who has a baby with his fiancée. LaToya, according to Drew, is a Delilah. Drew is upset that LaToya’s behavior has tarnished her baby’s blessing. I would find another Prophet for goodness’ sake. Hold up, now the six-week program became a four-week one. Hmm, maybe it transitioned into the horizontal step of the program for the last two weeks?

Drew is upset since the Prophet was a part of her family for a long time. The other ladies love this religious soap opera. Porsha especially loves that the focus isn’t on her and Bolo anymore.

Kandi doesn’t like the insinuation that LaToya is preying on a Prophet. She thinks the two of them having some sort of relationship shouldn’t affect Drew so strongly. Kandi thinks he is a grown man and to suggest that he isn’t in the driver’s seat of this situation and being unwittingly seduced by this sexy serpent is ludicrous.

LaToya can’t take the heat, so she is going to Prophet.com to find another one. I am sorry — this is a nonsensical argument. Shouldn’t Drew be happy that she found this out now before this Prophet laid his hands on her baby? Move on, Drew! Find someone else AND another storyline!

Kenya calls Cynthia and tells her she had her breast reduction. Cynthia wants her to have a viewing party. I am distracted by Cynthia’s red and white polka dot headscarf.

Porsha FaceTimes with Dennis, and he looks like he is trying to be incognito with his face half-covered. She wants PJ to talk to her dad before bed, but I hope his disguise doesn’t scare little PJ.

Cynthia visits Kenya, and she sees her new pool and wants to see her new boobs. LaToya and Marlo arrive at Moore Manor. This is momentous since Marlo has never been in her home. Marlo is disappointed that there is no food or drinks there. Kenya is willing to provide alcohol, but she needs her shady tea served first. Marlo thinks everyone can do Uber Eats. She thinks everyone has access to an EBT card during COVID.

Kenya misses that her boobs used to be able to be juggled. She liked being motorboated. Kenya has to explain to Cynthia what motorboating is. LaToya, of course, has to demonstrate how it is done. Cynthia wants to know how the birthday party went with Marc in attendance. She wants to know if anything was blown at that party other than candles. Kenya shares that Marc texted that he wants to start coming more often to Atlanta. He would prefer doing their counseling in person.

Kenya asks about the pop-up shop event. She wants to know what transpired. Kenya thinks that Drew hasn’t been exactly a good Christian. She remembers her on that darn coffee table doing all kinds of ungodly things with Bolo.

Kenya thinks that Drew is being hypocritical about LaToya messing around with a Prophet. LaToya thinks that Drew needs to develop a relationship with her treadmill. She really goes for the jugular, doesn’t she? She decides to then call the Prophet — to prove exactly what?

LaToya FaceTimes our beloved Prophet, and she wants to know if he is christening the baby. He looks like a smooth operator swathed in Gucci. Kandi grabs the phone and goes the direct route by asking him if he did the unholy with LaToya. Prophet Lott is talking in circles and not answering Kandi’s question. He says he isn’t engaged anymore and he didn’t have an intimate relationship with LaToya.

Prophet Lott is blaming Drew’s assistant for this messy situation. Marlo wants to be christened by this Prophet since she loves being with sinful people. Cynthia doesn’t think that Prophets lie. She really isn’t very bright, is she? Hasn’t she heard of Pastor Jamal Bryant? Our episode ends with this call, which really didn’t answer any questions for us.

Next week, we have the season finale. Drew and LaToya start putting hands on each other when they argue over the whole Prophet thing. Kenya is STILL having issues with Marc. Have a wonderful week, everyone!

DO YOU THINK LATOYA FOOLED AROUND WITH THE PROPHET?  TELL US —  THOUGHTS ON THE LATEST RHOA EPISODE?