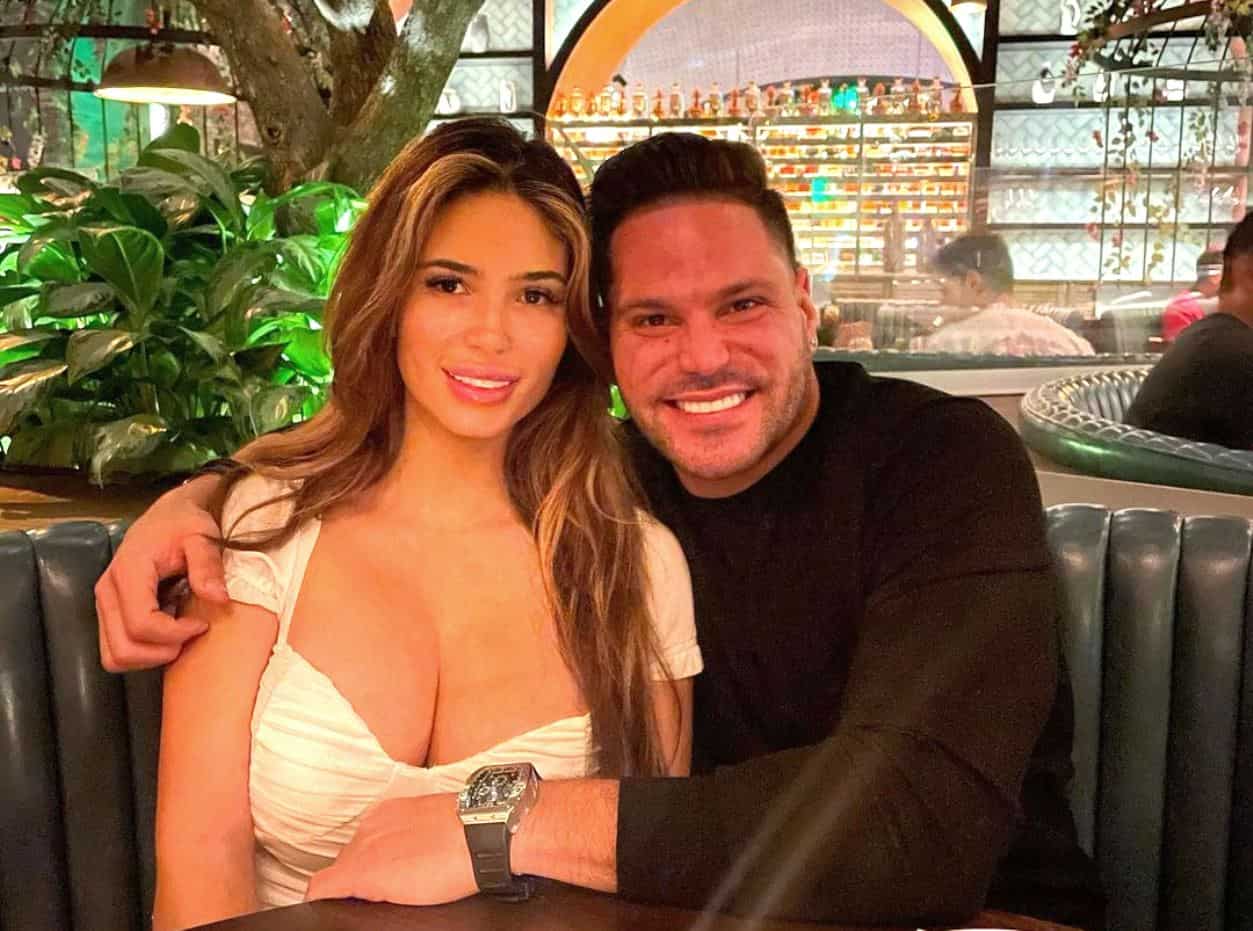 Ronnie Ortiz-Magro‘s girlfriend, Saffire Matos, is breaking her silence and defending the Jersey Shore star following his arrest for alleged domestic violence as Ronnie also issues his own statement.

Ronnie. 35, was arrested on April 22 and is now facing felony domestic violence charges after an apparent violent incident in Los Angeles. Though the alleged victim’s name was not released at the time, Ronnie has been dating Saffire, who took to Instagram on April 26 to let her followers know that she and the reality star are still going strong. The eyelash technician also claimed there have been “misleading” reports surrounding the nature of his arrest.

“Ronnie and I are fine,” Saffire began on her Instagram Story. “There is a lot of misleading information floating around out there. With anybody who reached out with concern I appreciate it with all my heart, but everything that’s being portrayed out there are not facts.”

Saffire, who has around 200,000 followers on Instagram alone, went on to ask for privacy. She also thanked those who have offered her support. 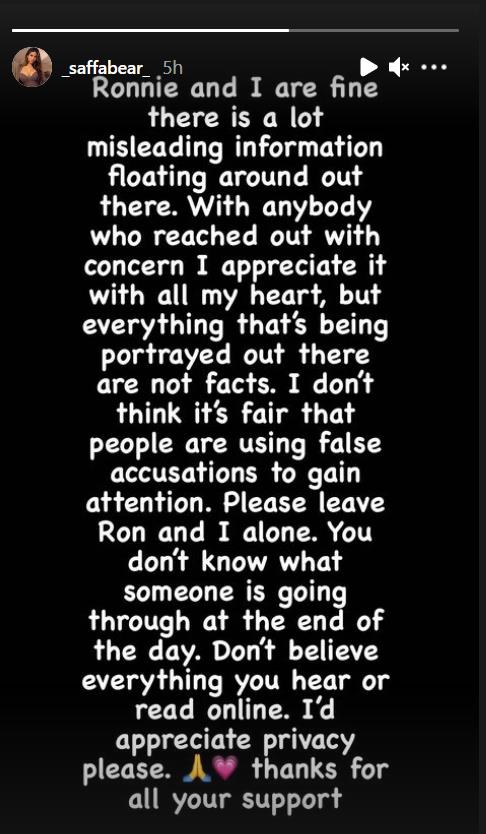 Meanwhile, about an hour after Saffire spoke out, Ronnie also issued a statement to his two million followers via Instagram. In his post, he thanked his “real friends,” but he seemingly bashed those who haven’t supported him.

“I am grateful for all of my real friends. Thank you for being by myself for the last few [weeks],” he wrote. “I take all experiences as lessons. You learn who really cares about you when [you’re] down and out and [then] you see who doesn’t. But I guess they call it the weeding process.”

“Thank you to my real friends who haven’t left my side and haven’t betrayed me,” he concluded the post before adding a couple of hashtags. 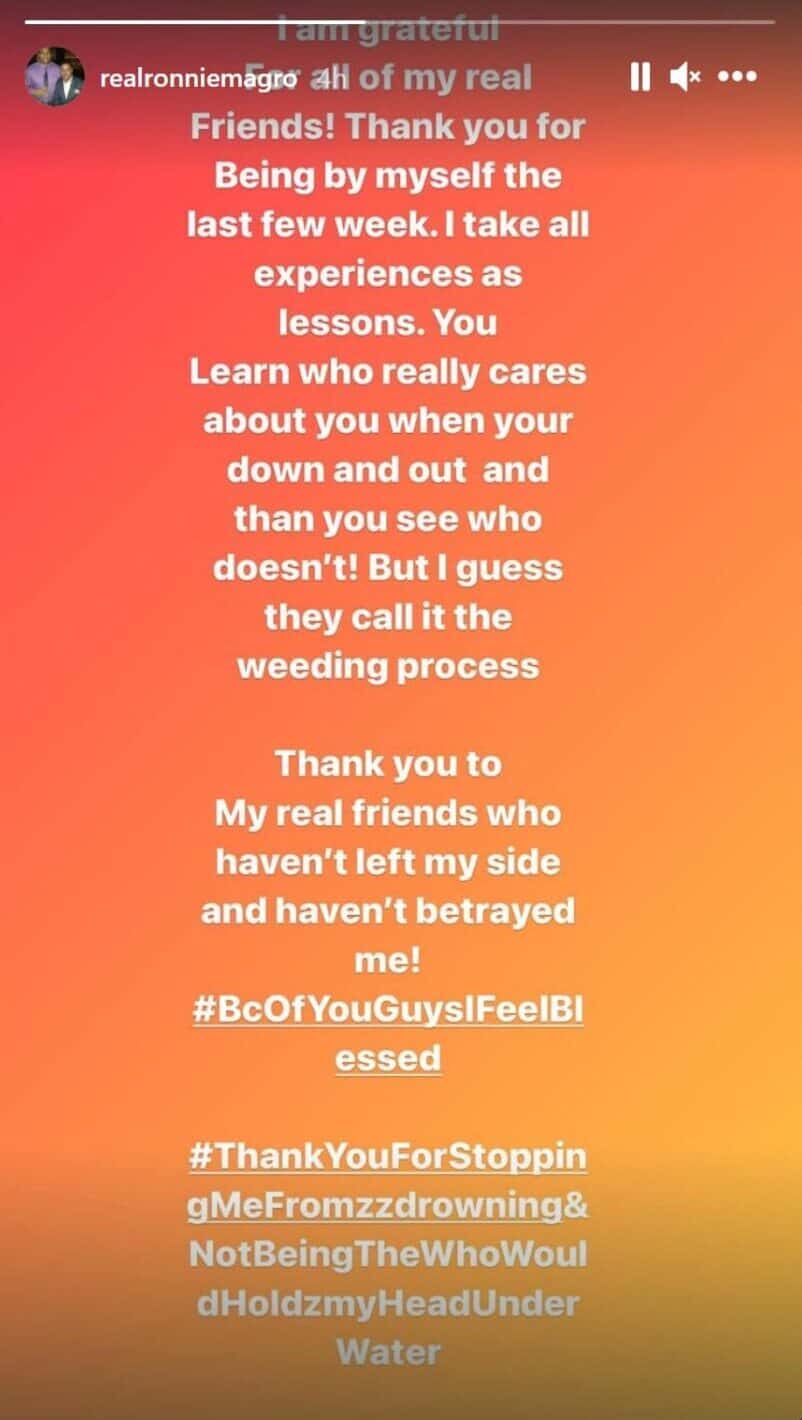 As Jersey Shore fans likely know, this is the second time Ronnie has been accused of domestic violence as he was also arrested back in 2019 following an incident with his ex-girlfriend, Jen Harley, with whom he shares a three-year-old daughter. He is currently serving three years of probation from the alleged 2019 attack, and he’s free on $100,000 bail following the April 22 incident.