Scheana Shay welcomed a baby girl with boyfriend Brock Davies on Monday, April 26, and on Tuesday, she shared news about the child’s arrival.

In addition to confirming her daughter’s name and weight, the Vanderpump Rules cast member revealed that her delivery came with major complications.

Along with a photo of her holding her child with Brock standing next to her, Scheana went on to reveal what happened after she was admitted to the Cedars-Sinai Medical Center in Los Angeles on Sunday.

“Almost 24 hours after being induced, my blood pressure was extremely elevated. I was diagnosed with preeclampsia, which has now turned into HELLP syndrome. My doctor said I was lucky, and we caught this just in time to treat as it’s very unusual to be caught so late, in postpartum,” she explained.

HELLP syndrome is an acronym, with the “H” standing for hemolysis, which is the breaking down of red blood cells, the “EL” indicating elevated liver enzymes, and the “LP” referring to a low platelet count. Typically, the condition is ceased once the baby is delivered. However, in some instances, the mother could require a blood transfusion and steroids may be necessary to help the baby’s lungs mature.

“Until this morning I was on a magnesium drip that made me extremely lethargic and flu-like, shivering uncontrollably to the point where I felt like I was seizing,” Scheana continued. “Having not caught this condition in time, that would have been likely. I am still being monitored closely for elevated liver enzymes and low blood platelets and not sure how much longer we will be here.”

After sharing the news, Scheana received kind messages from her Pump Rules castmates, including former star Brittany Cartwright, who wrote, “Congratulations, love you so much!! She’s beautiful.”

Charli Burnett left three comments, reading, “How are you so pretty after birth omg,” “Look at the angel. Congrats,” and, “Omg. I love yall.”

“She’s a little angel. That must have been so scary,” added Raquel Leviss. “Hopefully you feel better and soon you’ll be able to settle in at home with your baby girl. I can’t wait to meet her!” 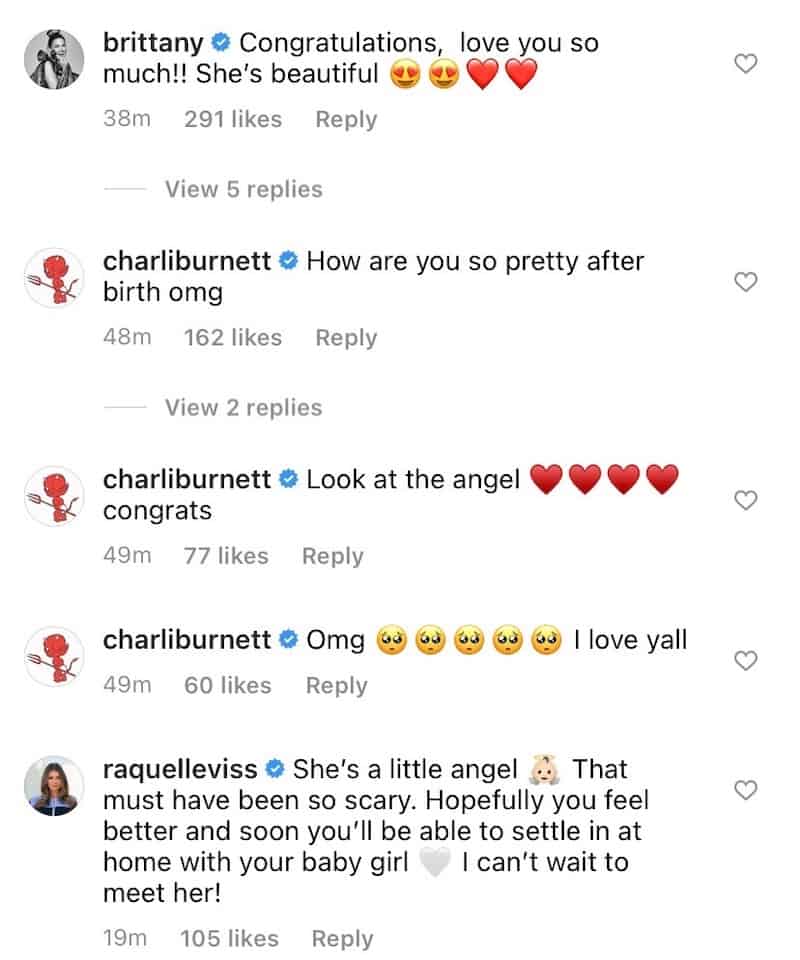 “What a woman. The love you have shown makes me feel I can move mountains for this family. I love you honey,” he said.

“April 26th was already a special day but yesterday I watched [Scheana] birth our beautiful baby girl with sooo much love. Baby girl passed her final tests today as we watched over mamma bear here in the High-Risk unit,” he shared. “[Scheana] was diagnosed with HELLP syndrome, a rare expansion of preeclampsia. Baby mamma is doing great, baby and daddy are holding down the room for mamma…… Thank you everyone who reached out and the amazing staff.”

Vanderpump Rules season nine will begin filming in early May.