by Elizabeth May 10, 2021 72 comments
ShareTweetWhatsappPinterestRedditTumblrMailFlipboard 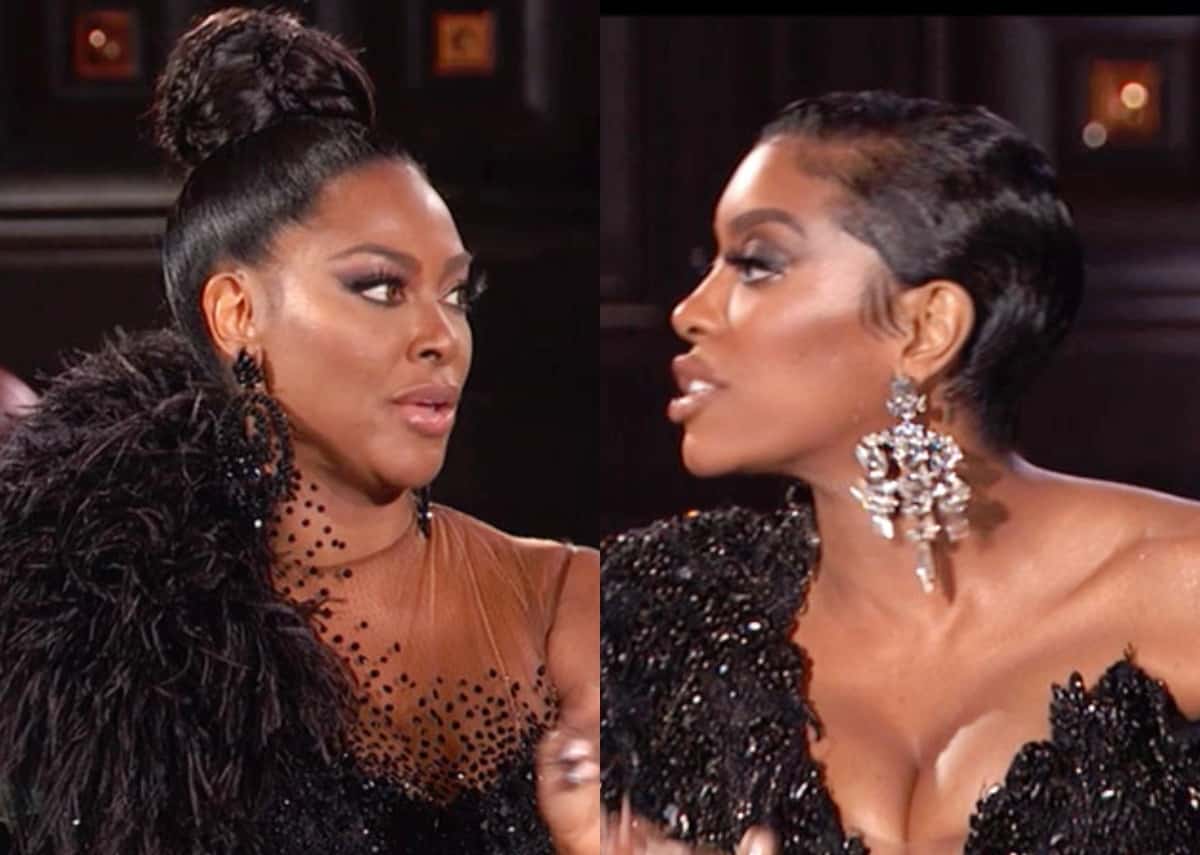 On part three of the reunion for the Real Housewives of Atlanta, will dungeon-gate with the Bolo-banging story be put to bed and never be told again? UGH, we can only hope! Grab a glass of wine and let’s dive deep into the dungeon of sexy secrets!

I want to first wish all of the “moms” a very happy Mother’s Day! I hope you all had a wonderful day with those who cherish you! I am sorry to now subject you all to that deep and dark dungeon and forage for some truth. Will we get to the bottom of who went down with/on Bolo? Well, whatever tawdry details are shared, we will put a lock on Porsha’s drawers and hope to never hear of it again! Lock it down, please!

Andy is going to subject us first to the season of “Bolo Court.” Kenya is the lead investigator, and she already has her prime suspect (Porsha) and one unknown suspect (Tanya). Andy thinks Tyler Perry might have some worries over competing with Kenya’s acting skills. Nope, that lovely man is part of a higher-level stratosphere of acting. Kenya made it all about finding out whose pu*sy was murdered in those sheets. She wasn’t acting — she was out for Porsha’s blood.

Andy wonders why they decided to cover the cameras. Porsha wanted it to be real and being covered up just wasn’t as fun. She wanted full access to Bolo’s member. Kenya’s working argument is that, even though the cameras were down, they were all still on the clock in a Bravo rented home. Side note: Did Porsha, aka Hennessey Hoe, forget to take the tin foiled talons off of her right hand? They resemble the foils you get to remove gels at the nail salon.

Kandi gets called out on why she didn’t shut Kenya down when she was talking trash. Kenya thinks no one else would have followed “girl code” if she had been the one bedding down with Bolo. Kandi had the bedroom placement next to the sexy action. Kenya makes the valid point that the other ladies were all discussing the evening with each other anyway. Cynthia and Drew were already dissecting the naughtiness in their room.

Kenya thinks it is her prerogative to “exploit” someone who she isn’t friends with. She has the right to out a fellow cast member on a reality TV show. Marlo went to Kandi since she was in the know and had a front-row seat to the debauchery. She shares that Kandi spilled all of the dungeon tea the next day.

Marlo thinks they are forced to be in this dungeon theme because of Porsha’s lies. Porsha decides to strut around the set. Kenya says this is payback for the “rape allegation in a dungeon” comment about Kandi and Todd. She resents Porsha for calling her a liar since she is telling the truth.

Porsha won’t allow Kenya to sl*t-shame her. She wants Kenya’s nosy ass out of her panties. Porsha thinks Kenya constantly lies about her marriage, so why is she the accountability police? Andy has to repeatedly shout out “STOP!” when they bicker back and forth. Porsha slams Kenya with, “I wish you were this obsessed with your husband.” She doesn’t know why her body matters so much to her.

Andy asks Kandi a very relevant question: “Do you think you really buried the hatchet with Porsha?” Kandi admits that she is still going to have hurt feelings over the past. She does think that they have gotten to a better place. Porsha thought that she had made amends. She asserts that she is a single f*cking woman who got laid by Bolo.

Porsha doesn’t understand why Kandi talked trash to Don Juan. She doesn’t know what Kandi’s mind space was at the time. Andy thinks what happened in the dungeon stays there unless those raunchy details get leaked to a reporter. We are now forced to speculate on who leaked the details to the press. Cynthia knows who was the most “pressed” but won’t spill the guilty party (Kenya) with the loose lips.

Porsha thinks that Marlo has used this situation to get close to her frenemy Kenya. Marlo claims she is a leader and wasn’t Kenya’s soldier. She and Kenya are doing okay now, but they aren’t BFFs. Marlo still is keeping Kenya at arm’s length since she still doesn’t 100% trust her. Cynthia makes a point that Marlo really doesn’t trust anyone 100%.

Porsha and Marlo go at it. Porsha is basically called a fat hoe with big horse teeth. She does look affected by these negative comments on her looks since she has spent a lot of coin on her upgrades.

Marlo gets called out about her warnings to the others about Porsha and Kenya. She was just doing her civic duty by keeping everyone informed.

Kenya thinks that Tanya should be upset over Porsha’s actions. She knew Tanya had a life partner but she still enticed her into that sexy throuple situation going on.

Andy asks Kandi if she told Marlo what happened in the dungeon. She admits she did but didn’t know that Marlo and Porsha had fallen out. Drew shares that Bolo remembered meeting her when she was out with Lebron. You know she runs in different circles than this group? Kenya gets annoyed when Drew says she hangs around with Lebron James. Drew claims she was friends with him before he was an NBA player.

LaToya and Drew are now discussed, and they talk about how their relationship has ebbed and flowed. OMG, it is all about the Prophet again. Drew thinks that LaToya was looking for Prophet D*ck. She thinks that LaToya’s actions have affected her spirituality. Drew needs to pray and have her tongue anointed before discussing this scandalous issue. Dear Lord, why is Bravo subjecting us to this religious blasphemy?

Drew talking about LaToya ruining her baby blessing is nonsensical. She brought a boombox that played a tape that contained a big nothing burger of intel. Drew said it proved the Prophet liked LaToya. LaToya will only acknowledge that they had a spiritual relationship. Drew acts like she was ditched by all of the prophets because of the holy drip.

Kandi doesn’t like when people use religion to explain away their behavior. Drew says there was more on that tape, but for legal reasons, she couldn’t use it. Kandi succinctly says that she couldn’t use it since it wasn’t cued up to where she wanted it to be.

Andy told her she needs to be more prepared with her receipts if she is going to be a Housewife. Drew is saying Prophet Lott is a false prophet — now. She thinks that he didn’t tell the truth on the phone since he was on camera. Andy calls Drew out on the Prophet investigation, but he thinks it is hypocritical that she is against Investigation Bolo.

Drew admits that she shouldn’t have given that jacked-up wig as a $1,000 gift. Come on now, you were acting like a broke b*tch just like Kenya claimed. Drew owed LaToya $1,000, but now they are even since she stole Drew’s bottles. Side note: It is beyond annoying when Kenya breaks out into song when Drew is talking.

LaToya would like to rebuild a relationship with Drew. She is probably trying to earn a spot next season if there even is one. Drew will bring LaToya to her mama’s church so she can’t hit on the holy ones anymore.

We now have Porsha vs. Kenya. There is a glorious montage of their shadiest moments including all of the ashy ones. Andy wants to know why it went left. Kenya thinks they got along since they were new moms and she shared some personal stuff. Andy claims the fans named this new alliance Twirl-sha.

Kenya is upset when Kandi and Porsha were laughing at her bowing down to Marc. Kenya, girl, EVERYONE who has eyes saw that you truly did bow down and kiss Marc’s arrogant a*s.

Porsha thinks she bonded with the sensitive side of Kenya after she had her baby. She didn’t like when she brought the marching band into Marlo’s event. Kenya doesn’t appreciate that Porsha didn’t defend her relationship since she knew what was happening in her private life.

Shamea wants to interject something about being called Porsha’s lapdog, which was her only storyline, frankly. She needed to finally speak up for herself. Porsha doesn’t want anyone slamming her supportive friend.

Andy thankfully dismisses Marlo, Shamea, and LaToya. Porsha wants an escort to her car since she is afraid Marlo is going to jump her in the parking lot. Marlo says, “I haven’t attacked anyone in years.”

Andy finally calls an end to season 13 of this total sh*tshow, and he wants to know what this group learned this season. Cynthia learned to not take anything for granted. Kandi just wants to live her life to the fullest. Kenya wants to learn to embrace her fear and look at 50 as a reset. Drew is looking for some healing. Porsha is just learning to basically be herself.

Andy, the gracious host, has his crush Ralph bring out some crab cakes that they all felt they missed out on. They toast to Bolo and the end of this disastrous season.

Thank you to all of you who were able to hang on with me this season. It was a tough season, and Bravo should consider re-booting this franchise along with RHOC. Take care, and see you tomorrow night for RHONY!

DOES RHOA NEED A REBOOT OR A CANCELLATION?