Home Featured Posts Open Post: Brought to You by Kim Richards and the Saga of the Blue Bunny!

by Ashlee Mason May 16, 2021 310 comments
ShareTweetWhatsappPinterestRedditTumblrMailFlipboard

Hi, Blurbers! Welcome back to Open Post, a place where you can comment on whatever you want while Reality Blurb gives you a weekly dose of light fluff. It’s also a space to have fun and socialize, so keep things COOL, and not UNCOOL, with your fellow commenters. Easy peasy.

For the last three Open Posts, I’ve been doing Top Ten lists, so I’d like to change things up this Sunday by revisiting our Remember When? series, in which we take a walk down Memory Lane and fondly reminisce about great moments in Real Housewives history! Ramona’s bug-eyed victory walk down the runway? Check. The She by Sheree non-fashion show? Check. Now it’s time to revisit a little incident that happened on season 7 of Real Housewives of Beverly Hills. Something so SHOCKING, I had to fan myself on my fainting couch for three days!

(That last sentence mayyyyyyy have been a slight exaggeration.)

If you have any suggestions for Open Post topics (and boy, do I need them!), please send them to [email protected]. Just keep in mind that we try to keep things light, and won’t do any topics that are too negative or gross (ex: I’m not gonna list all the times Housewives have shit themselves on camera, even if there have been MANY incidents). With all that out of the way, let’s get to today’s topic… The Saga of Kim Richards and the Blue Bunny! 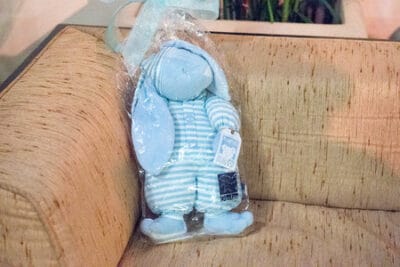 Once upon a time, there was a fragile little pixie named Kim Richards. Having tasted the sweet, sweet success of Hollywood stardom at a very young age, supporting her family during years when she surely shouldn’t have, and coping with numerous traumatic events throughout her life, adult Kim succumbed to depression when the offers started drying up, and gave into substance abuse during her lowest moments.

Many of us without acting careers have gone down similarly self-destructive paths as poor Kimmy, but the curse of living anywhere near Tinseltown is that… people talk about your issues. Somehow, EVERYONE knows about each other’s demons in Los Angeles. It’s a very hard place to hide your secrets when so much of your bankability as an entertainer depends on your personal image. What’s more is that there are enough desperate people – sometimes even family members – who will capitalize on your pain by selling your dark stories to media outlets. It’s a crazy world, I know.

Enter Kim’s younger sister, Kyle Richards. Kyle also had some acting roles as a child but never reached the level of success her sister (or even her nieces, Paris and Nicky Hilton) had achieved. This led to a bitter, Dostoevskian rivalry that would manifest itself through passive-aggressive digs, stolen houses, and exposed secrets that have caused seemingly irreparable damage to the siblings’ relationship. It’s even rumored that Bravo didn’t want Kyle for RHOBH unless Kim agreed to be cast as well. I couldn’t verify the rumor, but it fits snugly into my story, so take it with a grain of salt, and let’s carry on.

Kim had a rough go during her five-season tenure on Real Housewives of Beverly Hills. By the time the first season ended, Kim’s own flesh-and-blood had outed her as an alcoholic in the back of a limo… all while the cameras were rolling. Then in season two, a swamp creature screamed at Kim, “At least I’m not doing crystal meth in the bathroom all night, bitch!” which caused her to call said swamp creature a “Slut Pig!” Kim has spent many moments in front of our screens attempting to get sober, and sometimes failing miserably, like the time she was fascinated by the trash receptacle in the back of a limo, or scared the hell out of her co-star Lisa Rinna with her volatile behavior in… the back of a limo. (Kim, sweetie, please stay away from game nights and limos. They are not for you.)

Speaking of Lisa Rinna, it was that fateful ride to poker night at Eileen Davidson’s house in season five that sowed the seeds of her obsession with Kim’s sobriety… or lack thereof. To Lisa’s credit, I think her intentions were pure enough in the beginning. After all, Rinna’s own sister died of a drug overdose at the age of 21, and her living family members were no strangers to substance abuse either. But over time, Lisa’s concern over Kim’s health would evolve into malice, and that’s where the problems between the two began.

Coming off the heels of poker night, things got rocky when Kim learned that Lisa was being a chatty Kathy about her substance abuse to other members of the cast. When the group took a plane ride to Amsterdam, Kim mad-dogged Lisa the entire time, and when asked what was the matter, Kim snarled, “GET OUT OF MY BUSINESS, RINNA.” As they touched down in the Netherlands, it only got worse from there. Exhibit A:

WOWWWWWWWwwwww…. Or as our beloved Dutch Blurber Drankge would say, “Nou breekt m’n klomp!” (Translation: “This makes my wooden shoe break (into pieces)!”)

At this point, Kim wasn’t just annoyed by Lisa flapping her lips. She HATED Lisa for using her troubled life as gossip fodder. Plus, Lisa’s concerns for Kim’s health all but evaporated because she now HATED Kim for threatening to come after her husband, Harry Hamlin. Battle lines were drawn, and the tension was THICK at Adrienne Maloof’s magic trick party. Instead of showing the clip of nothing getting resolved between Kim and Lisa, let’s just watch Kathy Hilton deliver one of the shadiest lines in Housewives history:

BAHAHAHAHAHA! Mercy me, that never gets old. Okay, let’s get back to it. At Adrienne’s party, Kim confronted Lisa about all the shit-talking she’d been doing about her, and Lisa deflected a good portion of the gossip onto Swamp Creature (…you know I’m not going to Beetlejuice that trick), and stubbornly wouldn’t own up to her part in the debacle. At least to Kim, anyway.

The season five reunion didn’t provide any closure either. It turns out that Lisa privately sent Kim threatening texts, such as, “Be very careful or I will f**k you up,” and “You be nice to your sister, you believe her and stop telling lies, in that order. Thanks.” It was no secret to Kim that Lisa had a well-established history of going after her perceived enemies (ahem, Julianne Phillips, Starr Jones, and in due time, Lisa Vanderpump), so she met Rinna in a public park (LOL) to say, “Enough is enough with the threats.”

Even though Kim stomped out of the park with her head held high, she was fired from the show after season five because her inability to stay sober became a liability. Without Kim in season six, Lisa Rinna turned her attention to accusing Yolanda Hadid of faking Lyme’s Disease, which… didn’t go over well with Yolanda, surprise surprise.

Kim came back in a friend-of role in season seven, and again, the subject of her sobriety was on Lisa Rinna’s mind. She told baby-deer-in-the-headlights Eden Sassoon that Kim was “near death,” which quickly got back around to Kim and her sister through Eden spilling to Lisa Vanderpump. Rinna was literally backed into a corner when confronted by Kyle in Mexico, and when you have a desperate, trapped Rinna, they will howl and scream, “No! No! No! Can’t remember!”

Kim was understandably furious that her sobriety was being used by Rinna as a storyline AGAIN. And even though Lisa offered up an olive branch in the form of a blue stuffed bunny at Kim’s daughter’s baby shower, this happened:

And that, my friends, is what this lonnnng saga is all about! Go ahead and rewatch it, I’ll wait… You back? Okay, so I LOVE it when Kim blurts, “You don’t have to cry over it,” and Lisa squeezes out one lone tear. Eileen Davidson quickly jumped to Lisa’s defense, but Kim waved it off and said to Rinna, “I honestly don’t know what’s real and what’s not real with you.” (You nailed it, Kim, and I give you finger snaps for your dramatic approach in returning the bad energizer bunny.)

Andy Cohen, a hoarder of objects that remind him of fights between women, licked his chops at the idea of putting the blue bunny in the Watch What Happens Live clubhouse. It resides there to this day, still wrapped in cellophane.

One would think the season seven reunion was the final chapter of the blue bunny saga, but oh no. The RHOBH cast is notorious for beating horses long after they’re dead (sorry for the imagery, Blurbers), so on season nine, at Kyle’s “Farrahween” Halloween party, Lisa channeled a psychopathic Erika Jayne and cracked to Kim during a group photo, “You know, Kim, that was really shitty to return the bunny to Lisa Rinna.”

Kim was confused beyond belief, but instead of feeding into the negativity that enveloped these women’s relationships for four years, she resignedly huffed to Lisa, “Let’s just forgive each other.” And with that small stroke of compassion, the curse of the blue bunny was lifted.

Thanks for reading, Blurbers! Have a very merry Sunday, and see you in the comments section!

TELL US – Have you ever returned a gift because of its bad energy? Can anyone here squeeze out one lone tear if you tried? What shows are you watching these days?