by Emily Campbell May 17, 2021 257 comments
ShareTweetWhatsappPinterestRedditTumblrMailFlipboard 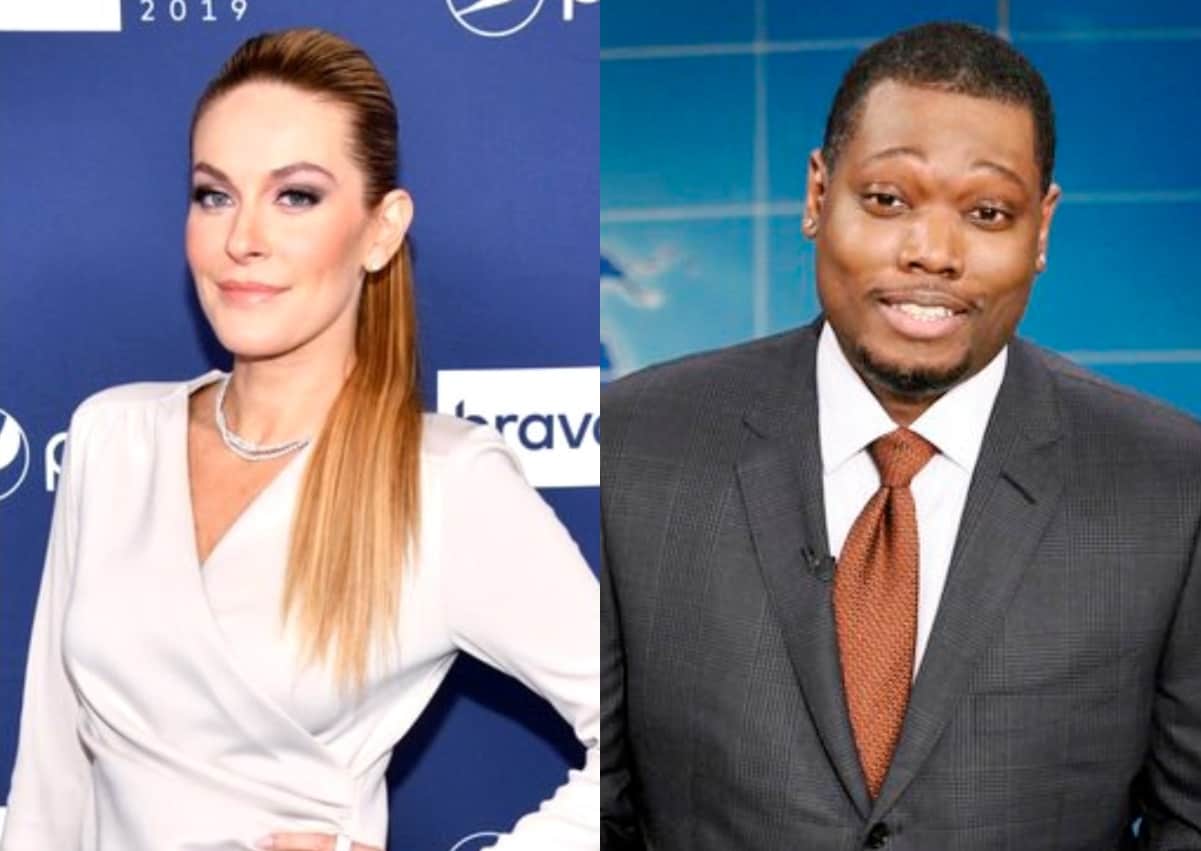 Leah McSweeney‘s old feud with Saturday Night Live comedian Michael Che recently resurfaced, and it’s not the best look for the Married to the Mob founder.

Prior to joining The Real Housewives of New York City in season 12, Leah seemingly met Michael on a dating app and later went on to slam the star as “D-list” and “arrogant.”

“I met a comedian, I’ve dealt with a few comedians,” she began her rant on an episode of her Improper Etiquette podcast in 2017 per Page Six. “They are the worst, I don’t even know why I entertain this but I have to say … Michael Che is so arrogant and so rude and disrespectful that I cannot even believe that someone … you’re like a D-list celebrity to me, whatever, that’s why I don’t even care that I’m saying his name. I’m not like blowing up Jay Z’s spot.”

She then went on to accuse the comedian of hating women and texting her random messages about being “fat.”

“Why are you on a dating app if you hate women,” Leah snarked. “Literally, you’ve never met me and you’re texting me like I’m a stupid b*tch … texting me and being mad rude. He kept just texting me, going, ‘I’m fat. Does that turn you on?’ And I’m like, ‘you’re fat? I think I’ve seen you and you’re not fat, OK.’”

She continued, “You’re trying to f*ck with me? I don’t get it. You’re just a f*cking dork wearing Air Force Ones [sneakers] at the end of the day. Like, cause you’re sitting up there writing your jokes on a little card, trying to figure out what the f*ck. His Netflix special [“Michael Che Matters”] is actually funny … arrogance is ignorance to me. You don’t know me, you don’t know nothing about me, you don’t know we have mad friends in common and like, you’re gonna treat me like some stupid b*tch? Like f*ck you. I just can’t deal.”

Unfortunately for Leah, once Michael heard what she had to say about him, he dropped receipts of their conversations, which do not appear to support Leah’s side of the story.

“Hey remember me,” she wrote in November 2016 as she began a conversation about Michael living in the Hell’s Kitchen neighborhood in New York City. She added, “Lots of food options at least.”

Following the exchange, Leah tried to reach out to Michael again on two separate occasions, but she was left on read.

Then, in late December 2016, she wrote, “U hate me [because] I’m White. Our conversations [are] everything to me [by the way]. We have a lot of friends in common and if [any one] of them saw this I would [be] so ashamed.”

It seems Michael was not amused as he bluntly let Leah know he had no interest in meeting her after she wrote, “Do u ever want to meet up? Or [are] we just gonna text each other randomly until eternity? Well, I did think it was odd [you] kept saying [you’re] fat.”

“I [don’t] wanna meet up,” he replied. “You text really strange declarations looking for a reaction, and I don’t wanna know what’s the real life equivalent of that.”

Screenshots of some of the text messages are below. You can click on the images to enlarge them. 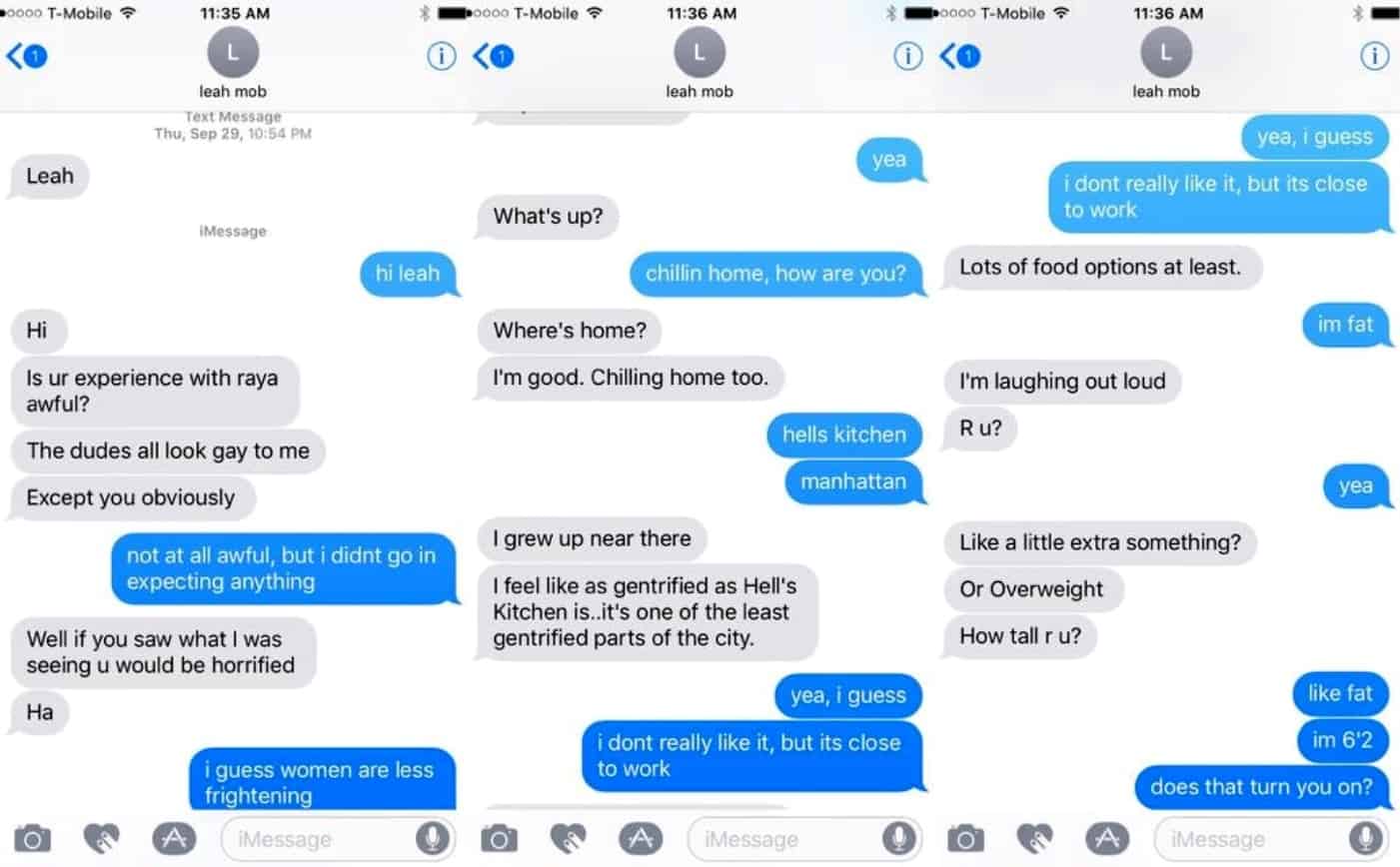 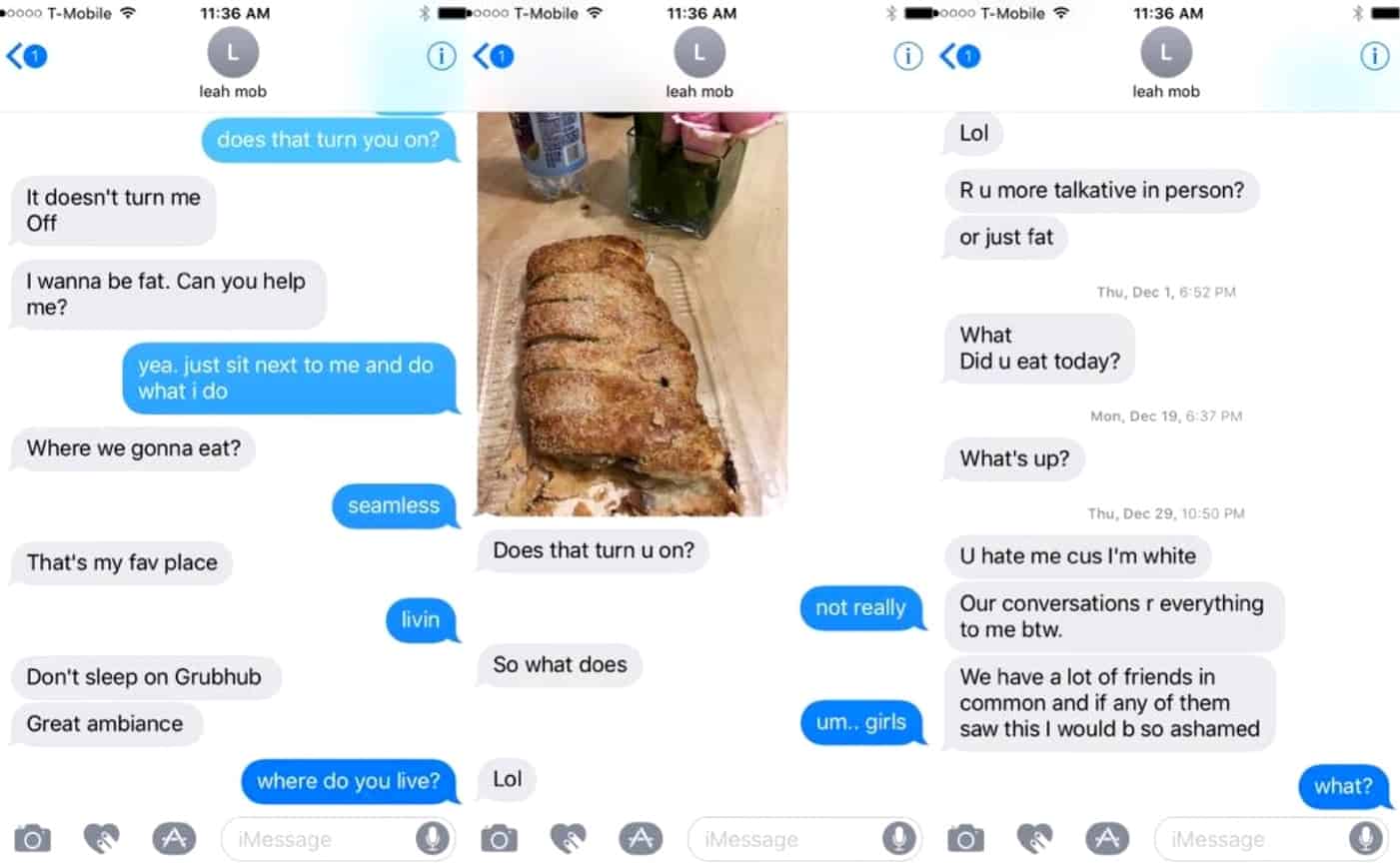 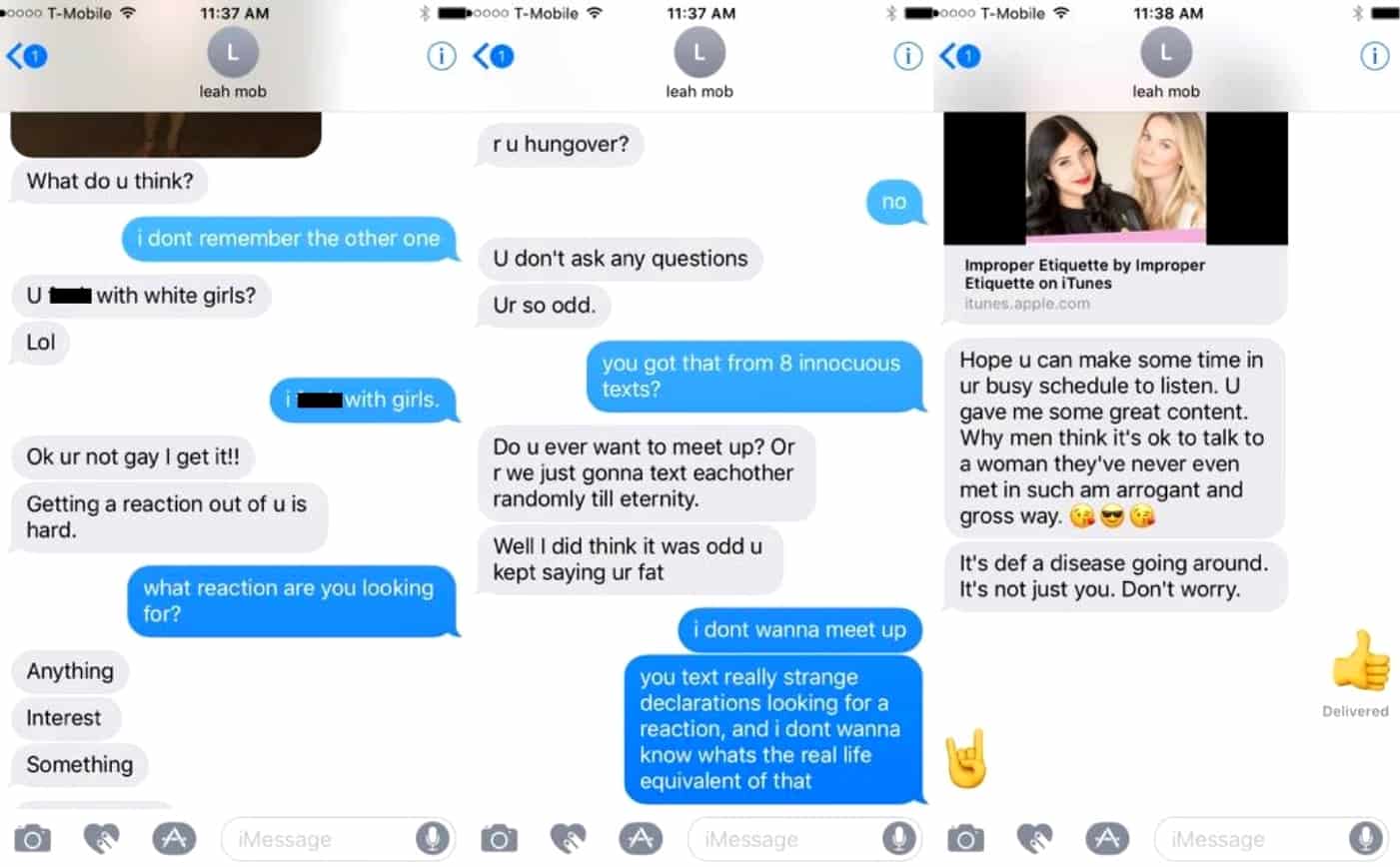 Oddly, it was Leah herself who sent Michael the link to the podcast episode, writing, “Hope you can make some time in [your] busy schedule to listen. [You] gave me some great content. Why men think it’s [okay] to talk to a woman they’ve never even met in such [an] arrogant and gross way.”

She added, “It’s [definitely] a disease going around. It’s not just you. Don’t worry.”

Michael simply replied with a thumbs up emoji, but he told Page Six at the time that “he’s proud of [his] curves.”