by Emily Campbell May 28, 2021 129 comments
ShareTweetWhatsappPinterestRedditTumblrMailFlipboard 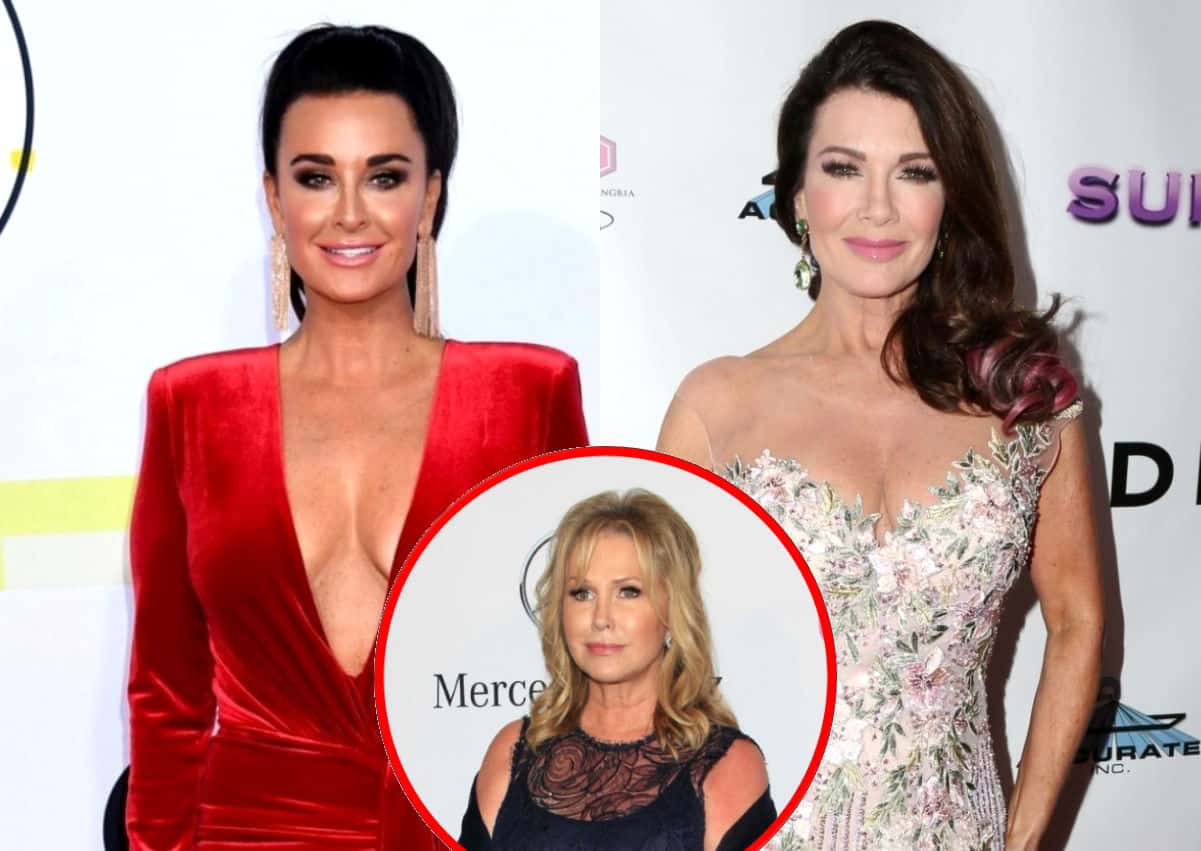 Kyle Richards is clapping back at Lisa Vanderpump‘s comment about her new nose, but she appreciates that her former co-star still watches The Real Housewives of Beverly Hills. Plus, she teases a tense moment with her older sister, Kathy Hilton.

Kyle and Lisa are still going at it in the press following the now-infamous dinner bill debacle. As fans know, Lisa sent her $132 dinner bill over to Kyle’s table as the Halloween Kills star was having dinner with a producer. Both Kyle and the producer refused to pay the bill, and the mother-of-four later claimed Lisa dined and dashed despite the fact that the Vanderpump Rules matriarch did pay her tab. Once Lisa got wind of Kyle’s comment, she fired back by shading her former BFF’s nose job.

“I didn’t dine and dash,” Lisa said on The Daily Pop. “She should keep her new nose out of my business.”

The following day, Kyle was caught out and about with sisters Kim Richards and Kathy, and the photogs asked the trio about Lisa’s remark.

“I don’t care what she says, it’s not important,” Kyle said as Kim threw her head back in laughter in the video shared by E! News.

Meanwhile, Kyle was asked about her ongoing feud with the Overserved star yet again as she celebrated the new season of RHOBH at Kathy’s house. After explaining her side of the “restaurant-gate” story for the 10th time, she was asked if she was surprised by Lisa’s behavior.

“I was not surprised at all. It’s very on par with the stuff Lisa does,” she told Access Hollywood. “And last night I was leaving dinner and someone said, ‘Oh Lisa said keep your new nose — your fake nose — out of my business.’ Well… I’m not in your business. You’re the one who sent your bill to my table. And by the way, thanks for watching the show [because] that’s how you know I had my nose done. Hope you enjoyed the show!”

As for how Kyle feels about filming with older sister Kathy, it seems she really enjoyed spending the extra time with her sister, but she did tease a moment when she’d had enough of Kathy ordering her around.

“I would say that it’s been very interesting. Very funny,” Kyle shared. “Probably sometimes funnier for the rest of the cast than me when she’s asking me to do all her errands and stuff. It’s so funny because I’ve been doing this so long and she’s like, ‘I need this. Where is this? Can you get me this?’ I’m like, ‘Kathy! I’m sorry, like, no! It’s every man for themselves around here, okay?'”

She added, “We did have a little moment one night where it got to be a little too much.”