by Lindsay Cronin May 27, 2021 98 comments
ShareTweetWhatsappPinterestRedditTumblrMailFlipboard

Lisa Vanderpump wants Kyle Richards to keep her new nose out of her business.

During a new interview, the former Real Housewives of Beverly Hills cast member took aim at Kyle’s recent surgery as she defended herself against claims of a “dine and dash” and laughed at a comparison on Twitter.

“I didn’t dine and dash. She should keep her new nose out of my business,” Lisa said of Kyle on the May 25 episode of The Daily Dish.

Earlier this month, Kyle accused Lisa of a “dine and dash” after she attempted to stick her and a producer with her bill at a restaurant in Los Angeles.

Looking back on their encounter, Lisa insisted the supposed “dine and dash” was nothing more than a harmless joke gone awry.

“OK, so I’m in a restaurant and I see Kyle and the producer of Overserved, he comes to me and he’s like, ‘Hi.’ He said, ‘I’m in here in the restaurant having dinner with Kyle.’ I said, ‘Oh, thanks a lot.’ I said, ‘Are you gonna buy me dinner?’ joking,” Lisa revealed. “When I left I gave the server an imprint of my credit card and I said, ‘Take my bill, I’m leaving now, to that guy over there.’ So I left and so I said, ‘If he doesn’t pay it here’s the imprint of my credit card.'”

After leaving the restaurant, Lisa texted with the producer and assumed that he had paid her bill. Then, after Kyle was caught at another restaurant later that week, Lisa learned that she was being accused of failing to pay her tab.

“I said… ‘It was nothing to do with her. It was to do with him who I have known for 10 or 12 years,'” Lisa shared, noting that Kyle “is always trying to make me look bad.”

In addition to shading Kyle’s new nose on The Daily Dish, Lisa was also spotted responding to a fan who suggested the nose looked a lot like her own.

“Have you noticed Kyle’s new nose. It’s the same as yours?” the fan wrote.

After seeing the message, Lisa posted a laughing bitmoji. 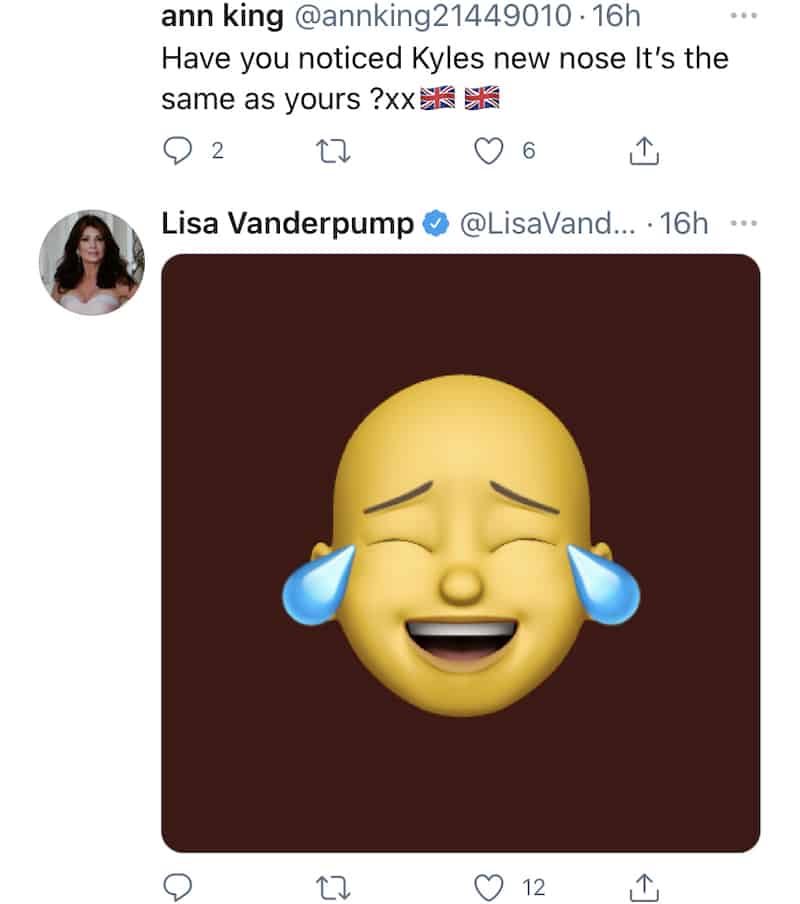