by Lindsay Cronin May 15, 2021 209 comments
ShareTweetWhatsappPinterestRedditTumblrMailFlipboard

The feud between Lisa Vanderpump and Kyle Richards will not die.

After Kyle accused Lisa of a “dine and dash” after she attempted to stick her and a Real Housewives producer with her dinner tab at Shu Restaurant in Los Angeles on Monday, the former Real Housewives of Beverly Hills cast member is shutting down Kyle’s allegations and providing proof that she paid her $132 bill.

“I didn’t think I’d have to produce it, but here is the proof I paid the restaurant bill. Ken and I also gave the wonderful server a $40 tip in cash and the delightful hostess $15 for seating us so quickly,” Lisa revealed to the Daily Mail on May 14.

A copy of Lisa and husband Ken Todd‘s restaurant receipt, which the outlet obtained, was shared on Twitter. 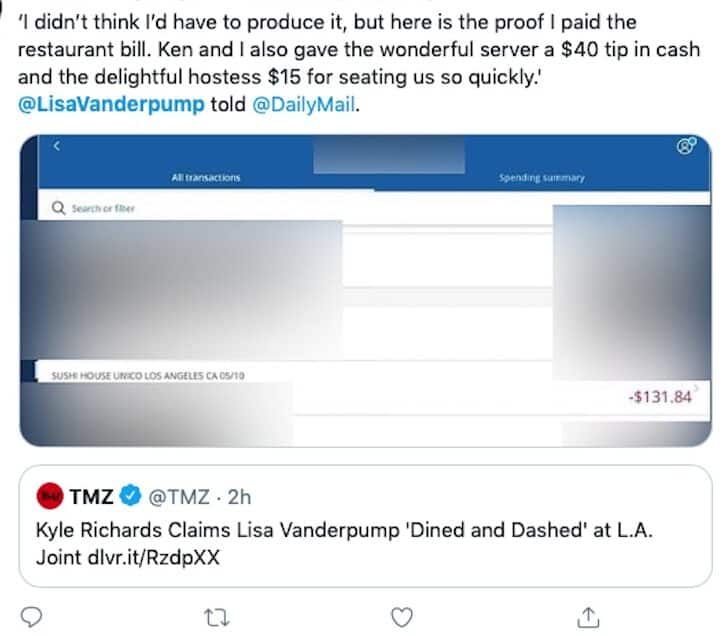 “This once again reinforces why I left the show as Kyle can’t be trusted to tell the truth and she most certainly can’t take a joke,” Lisa continued.

According to the report, Lisa sent her bill to Kyle’s table because she jokingly felt that the producer, who also works on Vanderpump Rules and her E! series, Overserved, owed her a meal.

Following their tense encounter on Monday night, Kyle spoke to TMZ outside of Craig’s Restaurant, where she accused the former RHOBH star of dining and dashing after enjoying a dinner date with husband, Mauricio Umansky.

“I did not pay. She dined and dashed,” Kyle said on Thursday, confirming that she did not pay the tab Lisa sent to her table. “It was a dine and dash situation.”

Also, during her interview with the Daily Mail, Lisa confirmed that the West Hollywood hotspot she co-owns with Ken, Tom Schwartz, and Tom Sandoval has re-opened as of May 14.

“TomTom will be reopening tonight after 14 months, and we can’t wait to welcome our fantastic guests back,” she shared.