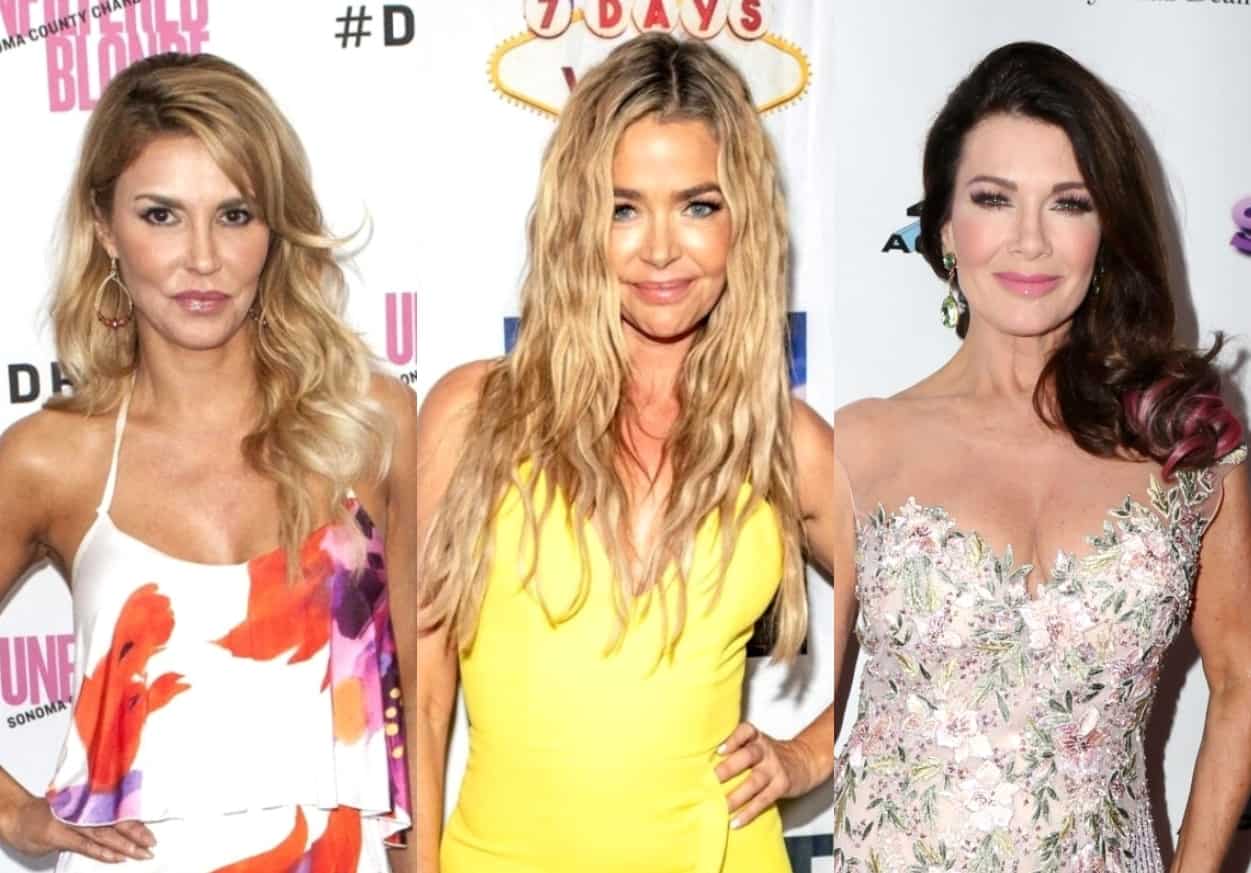 Brandi Glanville reacts to Denise Richards liking her photo on Instagram and explains why she believes Lisa Vanderpump ended their friendship as she doubles down on her claim that Lisa has a secret closet full of fur coats. Plus, she dishes on the time she drunkenly joined Brad Pitt and Angelina Jolie‘s table while they were dining at the Hotel Bel-Air.

During a recent podcast interview, the former Real Housewives of Beverly Hills star was asked to share her thoughts about Denise liking one of her latest Instagram photos. As fans well know, the women have not spoken to one another since season 10 when Brandi claimed she and the Wild Things actress had hooked up. Therefore, when Brandi found out that Denise had “liked” a photo she shared from her son’s birthday, she was surprised, to say the least.

“Oh my God, that’s so funny,” she said on the Hollywood Raw podcast earlier this week. “I have not seen her since the show, but she literally liked the photo of [me,] Eddie, Leanne at Mason’s birthday just the other day. She liked the photo after she called me a liar and all these crazy things.”

She added, “I was shocked too because I looked at it because my girl that does my social for me — because I do have help because it just isn’t fun — she’s like, ‘Look who liked your photo.’ And I was like, ‘Oh, E-Cosmetics. That’s awesome because it’s a company I worked with.’ She’s like, ‘No, dummy. Look.’ And I was like, ‘Oh my God. Is this the most public olive branch ever, and weird, or what is this?’ I still am in shock. I don’t know.” 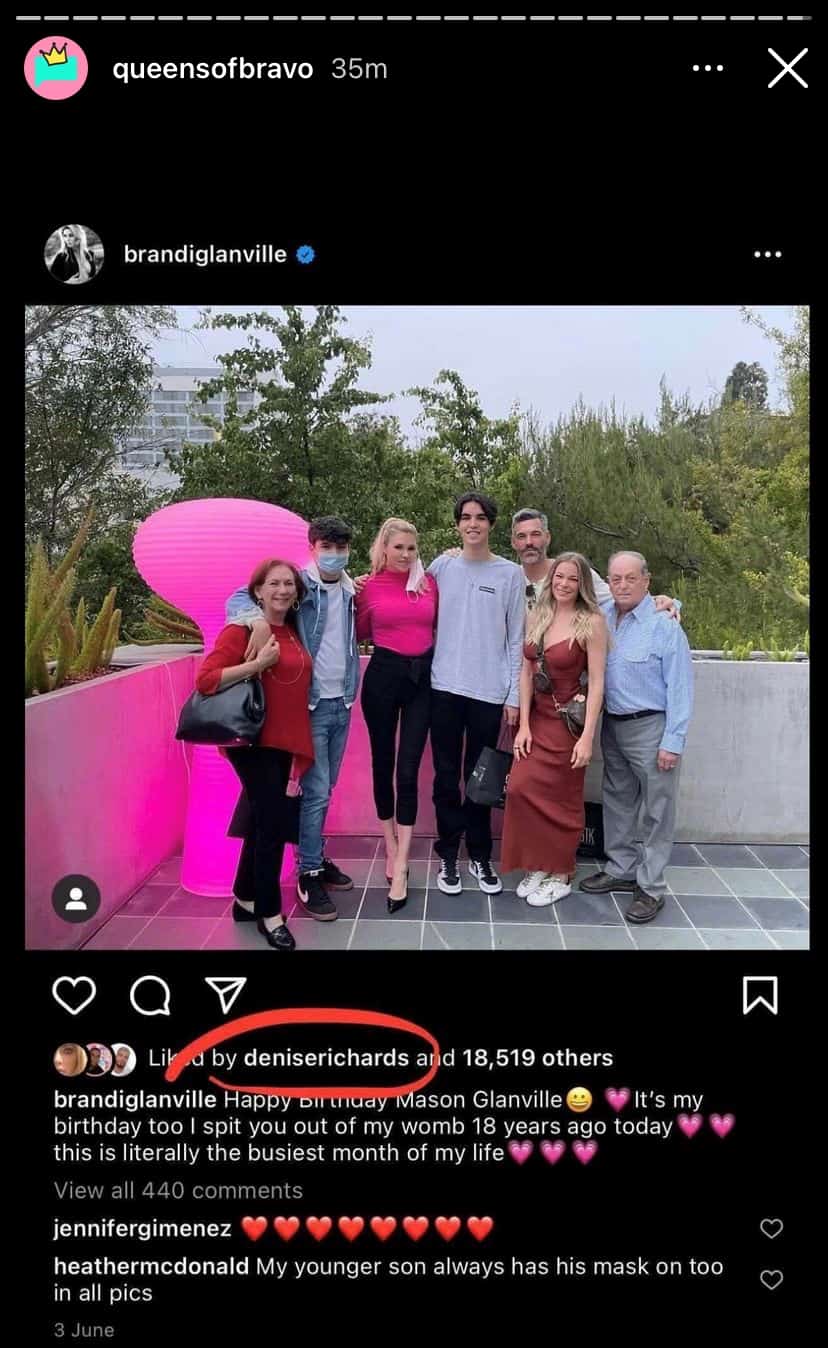 Brandi then went on to say that she subsequently reached out to Denise to thank her for liking the photo.

“I sent her [a DM] a couple of days ago because that’s when I found out about it,” she revealed. “I just said, ‘Hey, it sucks the way all this went down. Thanks for liking the photo.'”

Unfortunately, Denise has seemingly “unliked” the photo since then, but it’s unclear if Brandi has noticed yet or not.

Later in the podcast, Brandi was asked about the demise of her relationship with Lisa Vanderpump, who she was close with at one time. According to the Drinking and Tweeting author, Lisa dumped her as a friend because the RHOBH viewers no longer liked her.

“It was when I was depressed and the audience wasn’t liking me anymore,” she claimed. “So according to her, she’s like, ‘The audience isn’t liking you. I can’t be with you. They want Kyle [Richards] and I to be best friends again.’ I was like, ‘The audience? This is my real life.’ My dog is lost. My dad’s not talking to me. I’m in a depression. Sorry, but that’s what we’re sharing on the show. So she was like, ‘You kind of lost your audience.’ It just made it very clear to me that our friendship wasn’t actually what I thought it was.”

One of the podcast hosts, Dax Holt, then brought up a story Brandi once told him about Lisa when he was a guest on her Unfiltered podcast. Apparently, Brandi alleged at the time that the animal activist has a secret closet packed full of fur coats, which the Vanderpump Rules star would not allow the cameras to film. Dax wanted to know if Brandi still stands by that claim or if Lisa ever denied the allegation.

She added, “Ask the other Housewives. I’m sure some of them know too. I’m not the only one.”

Also during the podcast, the former reality star recounted the time she made herself at home at Brad Pitt and Angelina Jolie’s table while they were visiting a popular Bel-Air hotel.

“I went and sat down at a table — I was with Kyle Richards so she can say yes I did — with Brad and Angie at the Bel-Air Hotel,” she shared. “I just pulled up a chair. I might’ve been a little drunk, but we had a great conversation.”

As for what she spoke to the couple about, Brandi says they discussed the “boob doctor” she and Angelina were both seeing at the time.

“I told her we had the same boob doctor that did her [double] mastectomy,” she revealed.