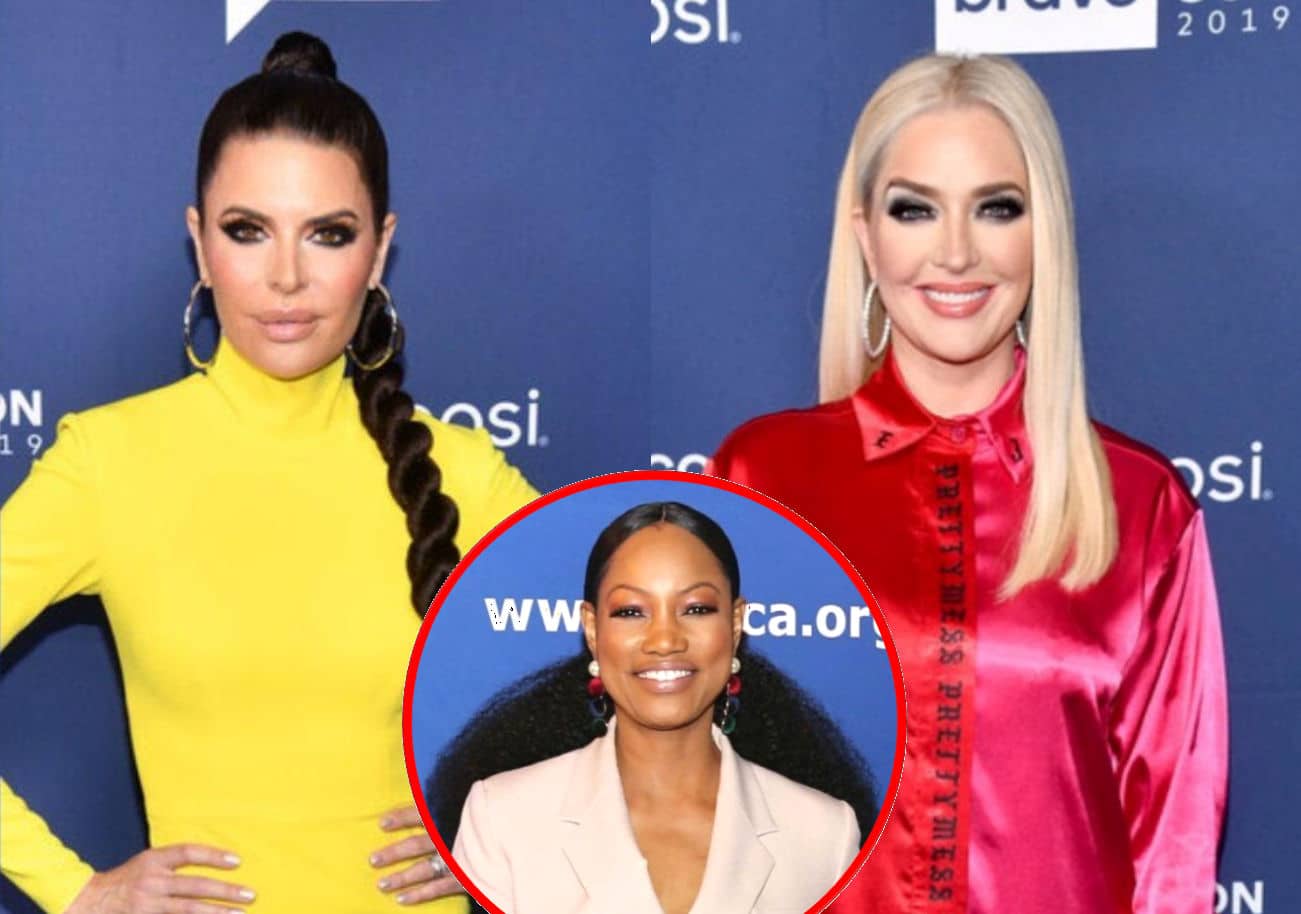 Lisa Rinna reveals just how close she is to Erika Jayne and shuts down a “terrible” rumor involving Erika and her Rinna Beauty makeup brand while also throwing shade at Garcelle Beauvais.

Lisa has had Erika’s back amid the singer’s divorce and legal mess so far on The Real Housewives of Beverly Hills. But as viewers have seen, the women are beginning to question what Erika really knew about Thomas Girardi‘s alleged misdeeds. In fact, on the August 11 episode, Sutton Stracke called a meeting with the ladies — sans Erika — to discuss the jaw-dropping Los Angeles Times article, which suggested the Pretty Mess author was complicit in Thomas’ alleged crimes.

Even though Lisa attended the meeting, she claims she had no clue that her friend would not be there, and viewers can seemingly expect her to confront her co-stars about that.

“To be honest with you, I didn’t know that Erika wasn’t going to be there when I was asked to come,” she said on Wednesday night’s episode of Watch What Happens Live. “And then I’m gonna have a lot to say coming up about that.”

Then, after host Andy Cohen asked Lisa how often she speaks to the “XXpen$sive” singer, she went on to gush over their friendship before also explaining why she’s been a lot more supportive of Erika than she was of Denise Richards in season 10.

“I talk to Erika when Erika, you know, wants to talk,” she shared. “I can’t really give it a time frame. But, let’s put it this way, I’m closer with Erika than I’ve been with anybody in this circle. I’m way closer to Erika than I was ever close to Denise Richards. That’s the truth.”

“I think that needs to be said,” she continued. “I think that’s important news. I know everybody thinks that Denise and I were close. We were acquaintances much like I am with Garcelle. I’ve known them for years, but they’re like party friends. You know we all have these party friends that we’re not close to. I have become close friends with Erika over the six years. I’m much closer to her than I have been to any of those women. So, that is important to know I think.”

Andy also asked the actress about that pesky online rumor that suggested Erika invested $5 million in her new beauty brand, which Erika has previously called “lies.”

“She did not invest in my makeup line, let’s get that really straight right now!” Lisa declared, adding, “That was a very terrible rumor. I mean, I would never borrow money from anybody. I have a partner that I’m in business with. Erika did not give me a dime.”

Meanwhile, Erika clearly appreciated Lisa’s remarks on WWHL because she reposted a fan’s sentiments on Lisa showing her support to her Instagram Story.

“I love how faithful of a friend [Lisa Rinna] is to [Erika],” the post read. 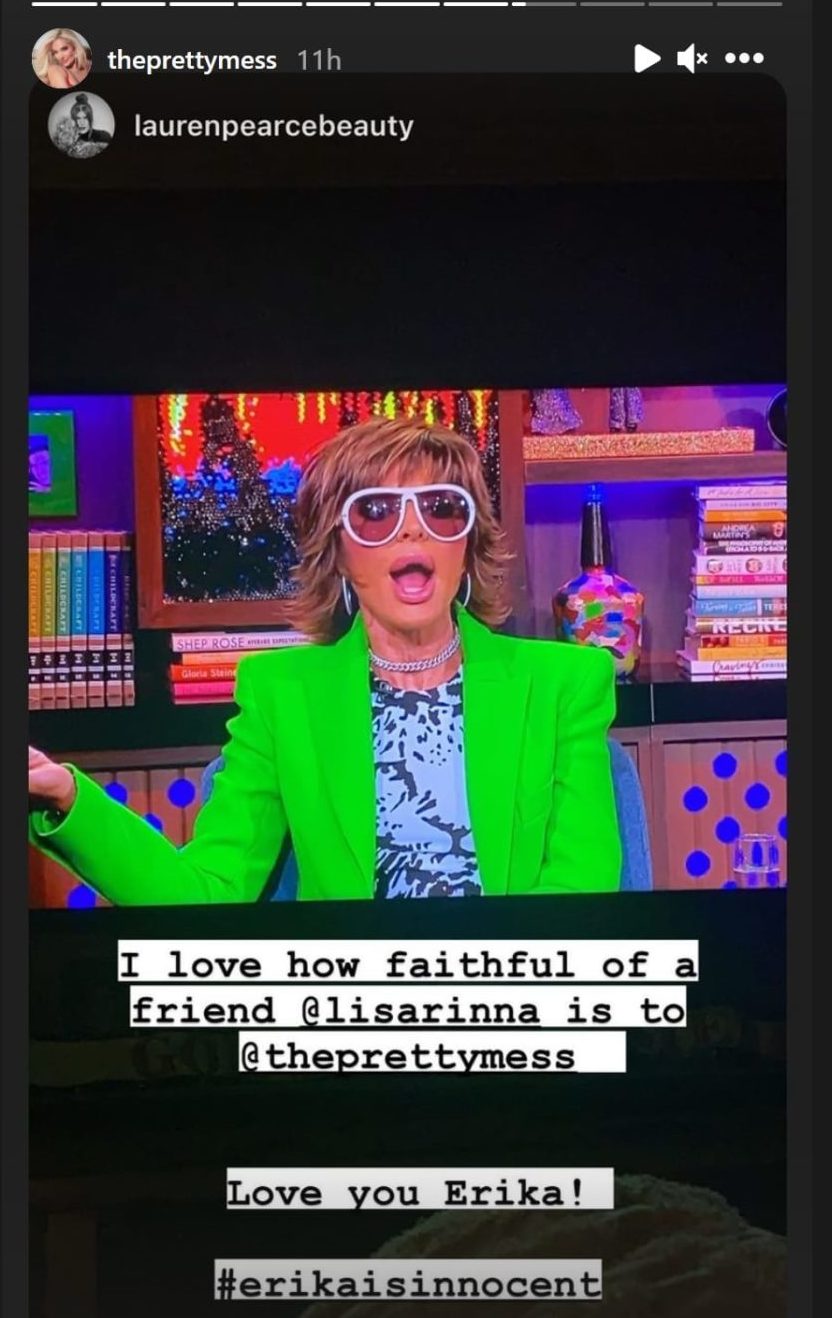 Lisa also reacted to Garcelle claiming on the show that she throws darts at her friends.

“No. I don’t. She does it for a different reason than I do it,” she snarked before also reacting to Garcelle’s remark about Denise wanting to rejoin the show if somebody with the initials “L. R.” is fired.

“My reaction was I reposted the clip on my Instagram,” she laughed. “And then Garcelle reached out to me and she was just like, ‘Let’s try to work it out. Let’s get together.’ Like, I just kind of called her to the mat, you know?”