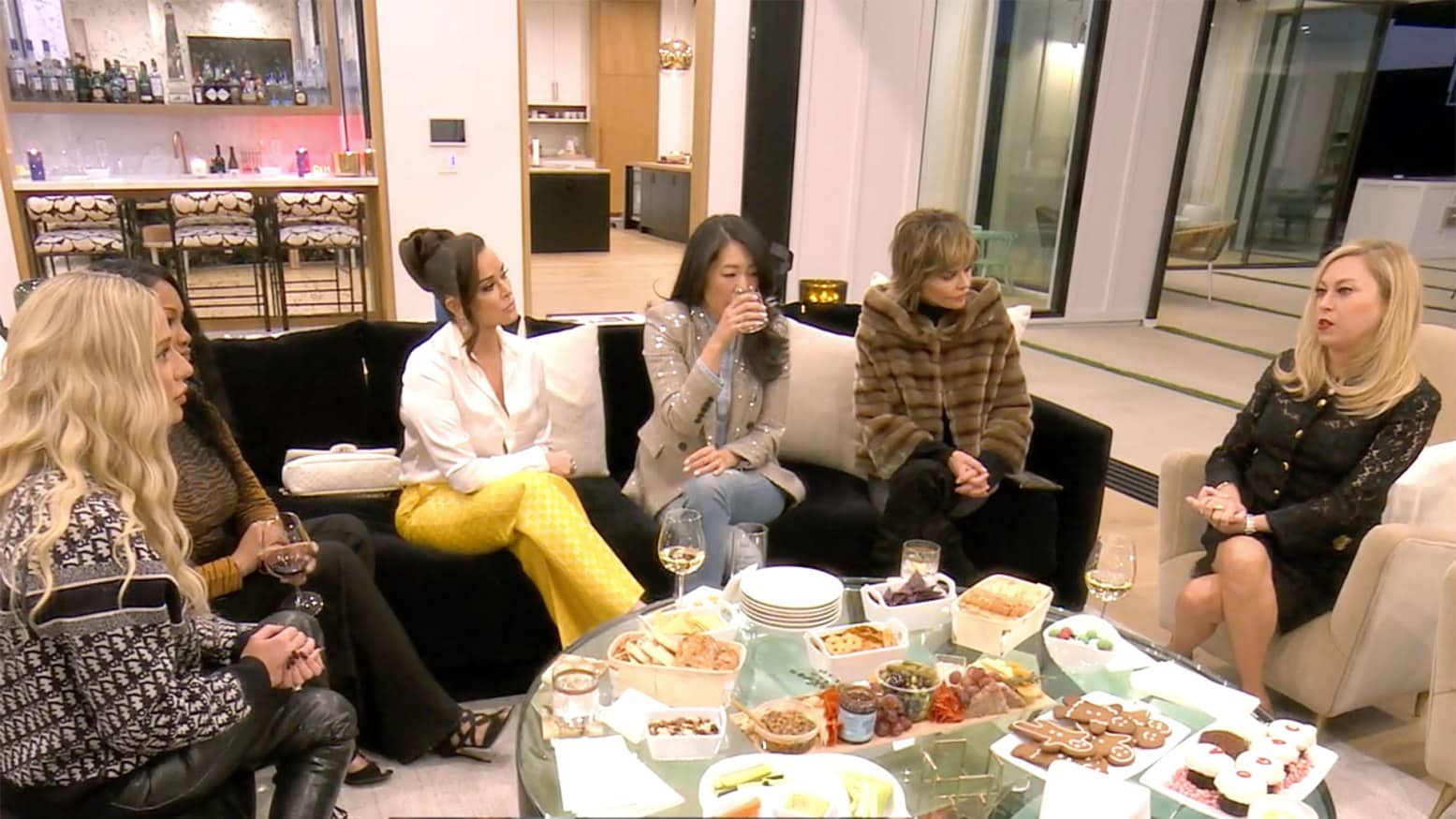 On this episode of the Real Housewives of Beverly Hills, Erika seems to be using Garcelle as a scapegoat for her tears and anger. The truth begins to come out very slowly with a little help from the LA Times…

As Erika sobs locked in a bathroom, Garcelle laments sharing with the rest of the ladies that Tom Girardi still calls Erika. Garcelle repeats over and over that she didn’t mean to upset Erika, and she thought that because Erika openly shared the information with her earlier in the day, she would have no problem if others knew about it. That was, in fact, not the case, as Crystal shares too late. Erika told Crystal she wanted that kept hush-hush, but unfortunately, Garcelle never got that memo.

Erika comes back out and shares what a hard time she is going through. The group looks on concerned, and Rinna jumps to Erika’s rescue, consoling her by saying, “Sorry that happened. It’s f*cked up.” Oh, Rinna. Girl. You should not have said that. Last time I checked you were trying to rebuild the relationship with Garcelle. Garcelle sees what Rinna is trying to do loud and clear and feigns leaving.

When she sits back down, Garcelle repeats that she never intended to really destroy Erika the way she did. Through hiccups, Erika promises she is fine and assures Garcelle that it’s all good, but it is evident that Sutton is right. This isn’t about Garcelle. “Is Erika being honest with us?”

After the drama, Erika decides she should head back home. While a few of the ladies run after Erika, Sutton reminds Garcelle she didn’t do anything wrong. Crystal begs Garcelle not to blame herself as she didn’t hear Erika say she did not want that information shared. Garcelle notes that it’s the three of them together and is concerned if the divide in the group is growing bigger because of the Erika issue.

When Erika pulls away, the women agree that this is not going to get better any time soon. Rinna, being the pot-stirrer that she is, can’t just sit and let things go. Instead, she asks Garcelle (who is already beating herself up), “Why did you feel that you had to ask that in that moment?” Rinna is the QUEEN of prying so to hear those words come out of her mouth is absolutely ridiculous, and Garcelle knows it.

They decide to break off and get ready for dinner. Garcelle feels like not a lot of people are on her side, and she sees just how divided the group really is. Meanwhile, the “inner circle” believes they should not ask any questions of Erika unless she wants to share information with them. They seem awfully invested in finding out the newest in the case for a group of people who claim to let Erika share as she pleases. Dorit discusses the involuntary bankruptcy that has been filed by Tom and she gets all savvy with the lingo. Leave it to Kathy to jump in and shake up the moment. She just wants her fatty, high-calorie goods from Ruth’s Chris, and I can’t really blame her for wanting to move on from the Erika chatter.

Nothing is better than watching them “waste” their outfits with just the ladies in Kyle‘s La Quinta house. The amount of sequins and diamonds is absurd. Take Sutton’s bracelet! In the words of Rinna to Sutton, “You’re so f*cking rich. I forget!”

Once everyone is back from the hotel, they hear that Kyle and Garcelle have texted Erika after she left. It’s no surprise that Erika never responded to Garcelle, but Garcelle wanted to be sure Erika knew she cared. Wish Rinna saw it that way.  She feels as though, “Garcelle needs to check herself as to why she does what she does. She throws little darts.” Hello, Rinna. This is exactly what you do! When she asks Garcelle if she can own any part of upsetting Erika, Garcelle thinks Rinna can shove it. After all, Rinna never bothered to back off Denise last season. Also, it’s nearly impossible to take Rinna seriously with her ginormous parka on as she tries to make Garcelle feel bad for something she didn’t mean to do. Garcelle shuts Rinna up by saying she overstepped, and Rinna seems satisfied for the time being.

The ladies sit down to enjoy their Ruth’s Chris, and because they can’t have a normal, healthy conversation, they decide to play a “happy” game, as opposed to a sad one?? This takes a turn and a conversation about color surfaces. Kathy explains how Michael Jackson told her he doesn’t see color, but I am proud of Garcelle for showing the way it works: “If you don’t see color, then you don’t see me.” Garcelle explains that times have changed, and although Kathy likes to see all equally, Garcelle shares the reality that, as sad as it is, she is not treated the same because of her skin.

“Just because you haven’t grown up with it, doesn’t mean I haven’t experienced it,” is Garcelle’s response to Dorit explaining how she was told from a young age to be respectful. “It’s a privilege not to have that conversation” about skin color. When Dorit goes on what she thinks is a helpful rant about the help in her home and how her children love and respect multicultural and dark-colored people, Garcelle can’t help but ask, “Do the brown people only help at your house?” Er, awkward. Dorit backtracks and shares that her mother’s BFF is a Black woman. Notice how Sutton stays quiet at the end of the table. She is not touching this with a 10-foot pole.

Let’s count how many times these women talk about “help?” Dorit, just clean up. Sorry that you must put your dishes in the dishwasher. Relax. Garcelle and Crystal head back to the hotel and the Kyle crew sit around to have some girl talk. Wait — Harry Hamlin has acrylic nails on one hand so he can play the guitar? When Rinna whips out the picture, the ladies near lose it. Poor Harry. Maybe he won’t cook for you trolls ever again.

The next morning, the hotel ladies gather together over some coffee. Garcelle shares that Erika still has not texted her back, but that’s because she has bigger fish to fry. An LA Times article about Thomas has just come out, and it shares an in-depth look at what’s really going on with the Girardis.

Some highlights from the too-long-to-read article, according to Kyle, are that Tom diverted firm assets for lavish living. He won’t say what happened to the money and that he took money from victims he was apparently representing. It is unfathomable to believe that someone could take advantage of other people like Tom is being accused of doing. On top of that, “loans” were allegedly being funneled to Erika’s Global LLC. Cringe. Looks like Erika left the girls’ trip early cuz she knew that article was coming out, not cuz she was “offended” by Garcelle. Bet Rinna feels pretty bad for pushing Garcelle to “own it” yesterday and blindly supporting Erika now that this is all out in the universe.

When Sutton joins Rinna and Kyle, she explains that they used the word “Ponzi scheme” in the article. Sutton further states that she believes the money that was funneled to Erika’s account is most likely all gone. Erika had to have known this LA Times article was coming out and she probably felt the pressure. Sutton maintains that these are not white-collar crimes. There are actual victims involved here, and the article implies that Erika knew all of Tom’s business “endeavors.”

Rinna cannot believe that Erika knows anything that goes on. She claims if you’ve been married for a long time, you just blindly follow your partner. Sutton reminds the women that if her name is on this LLC company, Erika could face jail time. Since the group has known Erika, they have always known the Girardis to be wealthy, but now, they all feel like they don’t know Erika at all. They are blindsided to find out the news but are also worried about her life. They wish they knew what else Erika was hiding from them as Erika just recently exposed Tom’s affairs and his accident.

Sutton also questions if they had “been slightly duped by the lies” as Dorit wonders if they even know Erika at all.

Once they all return home, Dorit gets told by PK that she “can’t support these allegations.” Seems like everyone is beginning to question how they can trust Erika. Kyle talks to Dorit and shares that her mind has been racing. Kyle states that Sutton wants to get together with all of the women, minus Erika, so they can discuss the LA Times article. Seems to me that Sutton moonlights as a detective.

Sutton describes the situation as “urgent” and has called for a meeting at Dorit’s house. “Hi, my love.” “Hi, my baby.” Ugh, Rinna and Dorit, quit it already. Glad to see Kyle dressed appropriately in her too-small yellow pants to lounge around in Dorit’s house. They get right into it and share their surprise about Erika’s Instagram post. Erika shared photos of Tom’s alleged mistress WITH text messages (back from 2005). Garcelle outs Erika for not being honest about Tom’s affair, so that leaves everyone scratching their heads. What should they believe?

When Sutton sits down, she shares that she has a lot of “reservations” about what happened. She gets it all out there, and she feels as though they are being placed in a bad position. Sutton explains that her internal alarms have begun going off, and she essentially says she doesn’t believe Erika. Based on the way everyone reacts, it is evident that they all sort of fall in line with Sutton. In the end, Sutton states she is not sure how much she wants to be around her “friend” during this time. It’s just not adding up, and Sutton’s channeling her inner Nancy Drew.