Just hours after multiple reports stated RHOBH star Erika Jayne strongly believes her estranged husband Thomas Girardi had multiple affairs on her during their 21-year-marriage, the Bravo star took to her Instagram page to share photos and text messages she is claiming are from Tom’s alleged mistress.

During the late night hours of Friday, the Real Housewives of Beverly Hills singer posted and quickly deleted a post in which she accused Tom of paying for his alleged mistress to get plastic surgery and footing her store bills.

“This is Justice Tricia A. Bigelow. She was f**king my husband Tom Girardi and he was paying her Saks bill and paying for her plastic surgery,” Erika alleged on December 18 in the now-deleted post. Reality Blurb is choosing to blur out her phone number. 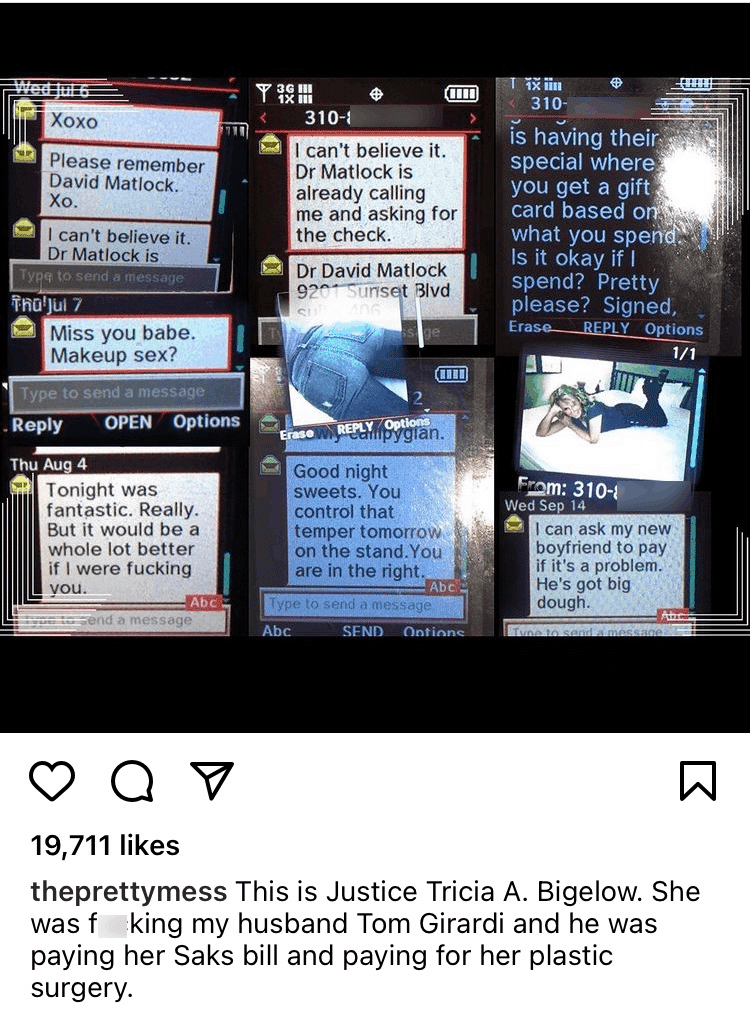 This alleged other woman being named by Erika is actually a judge in California.

This social media post is quite shocking and out of character for Erika who had previously requested privacy after announcing her divorce from Tom just last month.

It appears Erika, 49, is attempting to shut down any claims that this divorce is a sham and simply an effort to hide her money amid Tom’s mounting lawsuits, embezzlement claims, and involuntary bankruptcy.

Earlier today, a report came out, from People, which shed new light on the apparent reason Erika is choosing to walk away from her marriage.

“The reason she divorced Tom is because he was cheating on her with multiple women,” a source close to the couple shared, adding that the RHOBH star “[knew] about his infidelity for years” but “wanted to try and save the marriage.”

The source continued, “When she was performing her last week on Broadway, he left her high and dry and was frolicking around town instead of supporting her and attending her shows. She realized she would never be a priority to him and that was her breaking point.”

This comes just days after a federal judge decided to freeze Thomas’s assets after being held in contempt for $2 million from a settlement fund meant for the widows and orphans of plane crash victims. The lawsuit alleged Thomas used the money to fund his and Erika’s lavish lifestyle. Prosecutors have also began to look into Thomas’ dealings.